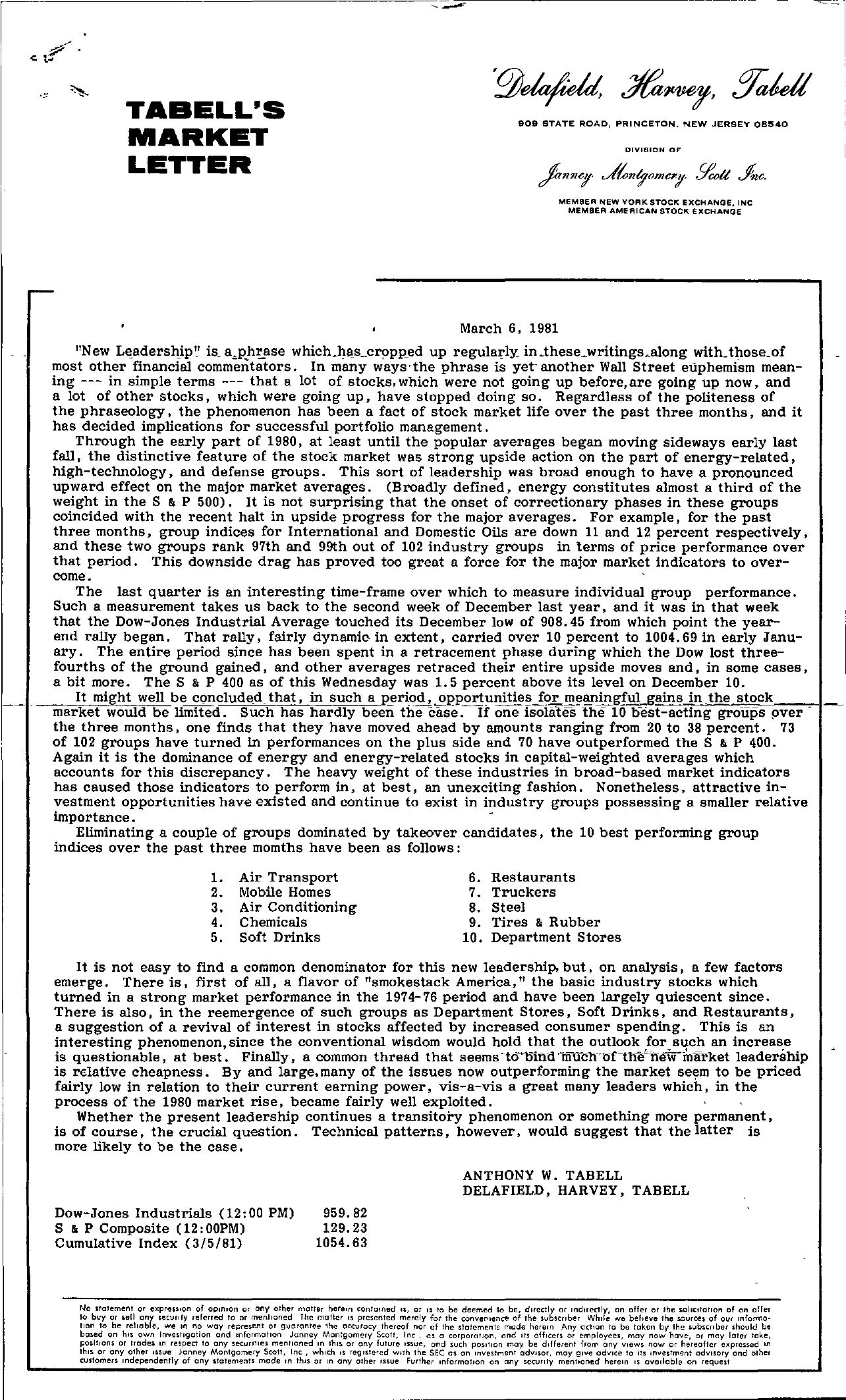 . TABELL'S MARKET LETTER – l————– 909 STATE ROAD, PRINCETON, NEW JERSEY 08!540 DIVISION OF MEM8ER NEW YORK STOCK eXCHANGe, INC MEMBER AMERICAN STOCK EXCHANGE March 6, 1981 New Ladership is a.p,h;ase which.hascI'9PRed up regularly in.these.writingsalong with. thoseof most other financial commentators. In many ways'the phrase is yet-another Wall Street euphemism meaning — in simple terms — that a lot of stocks, which were not going up before,are going up now, and a lot of other stocks, which were going up, have stopped doing so. Regardless of the politeness of the phraseology, the phenomenon has been a fact of stock market life over the past three months, and it has decided implications for successful portfolio management. Through the early part of 1980, at least until the popular averages began moving sideways early last fall, the distinctive feature of the stock market was strong upside action on the part of energy-related, high-technology, and defense groups. This sort of leadership was broad enough to have a pronounced upward effect on the major market averages. (Broadly defined, energy constitutes almost a third of the weight in the S & P 500). It is not surprising that the onset of correctionary phases in these groups coincided with the recent halt in upside progress for the major averages. For example, for the past three months, group indices for International and Domestic Oils are down 11 and 12 percent respectively, and these two groups rank 97th and 99th out of 102 industry groups in terms of price performance over that period. This downside drag has proved too great a force for the major market indicators to overcome. The last quarter is an interesting time-frame over which to measure individual group performance. Such a measurement takes US back to the second week of December last year, and it was in that week that the Dow-Jones Industrial Average touched its December low of 908.45 from which point the yearend rally began. That rally, fairly dynamic- in extent, carried over 10 percent to 1004.69 in early January. The entire period since has been spent in a retracement phase during which the Dow lost threefourths of the ground gained, and other averages retraced their entire upside moves and, in some cases, a bit more. The S & P 400 as of this Wednesday was 1. 5 percent above its level on December 10. It might well be cQncludedthat, in such a priod,ppljunitie!lJ0Lm!ljngful gains in the stoC.k.. …,.t market would be limited. Such has hardly been the case. If one isolales lhe 10 b-est-acting groups pver' the three months, one finds that they have moved ahead by amounts ranging from 20 to 38 percent. 73 of 102 groups have turned in performances on the plus side and 70 have outperformed the S & P 400. Again it is the dominance of energy and energy-related stocks in capital-weighted averages which accounts for this discrepancy. The heavy weight of these industries in broad-based market indicators has caused those indicators to perform in, at best, an unexciting fashion. Nonetheless, attractive investment opportunities have existed and continue to exist in industry groups possessing a smaller relative importance. Eliminating a couple of groups dominated by takeover candidates, the 10 best performing group indices over the past three momths have been as follows 1. Air Transport 2. Mobile Homes 3. Air Conditioning 4. Chemicals 5. Soft Drinks 6. Restaurants 7. Truckers 8. Steel 9. Tires & Rubber 10. Department Stores It is not easy to find a common denominator for this new leadership, but, on analysis, a few factors emerge. There is, first of all, a flavor of smokestack America, the basic industry stocks which turned in a strong market performance in the 1974-76 period and have been largely quiescent since. There is also, in the reemergence of such groups as Department Stores, Soft Drinks, and Restaurants, a suggestion of a revival of interest in stocks affected by increased consumer spending. This is an interesting phenomenon, since the conventional wisdom would hold that the outlook for such an increase is questionable, at best. Finally, s common thread thst seems-to-15ind -mucll'of-th'E!neW -market leadership is relative cheapness. By and large,msny of the issues now outperforming the market sem to be priced fairly low in relation to their current earning power, vis-a-vis a great many leaders which, in the process of the 1980 market rise, became fairly well exploited. Whether the present leadership continues a transitory phenomenon or something more permanent, is of course, the crucial question. Technical patterns, however, would suggest that the latter is more likely to be the csse. . Dow-Jones Industrials (12 00 PM) 959.82 S & P Composite (1200PM) 129.23 Cumulative Index (3/5/81) 1054.63 ANTHONY W. TABELL DELAFIELD, HARVEY, TABELL No stalement or expreSSion of opinion or any other moiler here'n tonlOined IS, or IS to be deemed 10 be, dlrettly or ,ndirectly, on offer or the soliCitation of on offer to buy or sell any security referred 10 or mentioned The maIler IS presented merely for the convef'len of the subscriber While we believe the sources of our information to be reliable, we In no way represent or guarantee Ihc accuracy thereof nor of the statements mllde herein Any ochon to be taken by the subSCriber should be ba5ed on hiS own Investigation and information Janney Montgomery Scot!, Inc, as a corporation, and Its officers or employees, may now have, or may lator toke, positions or trades In respect to any secUrities mentioned In thiS or any future Issue, and such position may be different from any views now or hereafter expressed In thl or any other Issue Janney Mootgomery Scott, Inc, which 15 reglsfered With the SEC as an IIlvestl'lent adVISor, may gIVe adVice 10 lIs Investment adVisory and other customers ,ndependently of any statements mode In Hus or In ony other Issue Further Information on any security menllooed herein IS aVailable on request 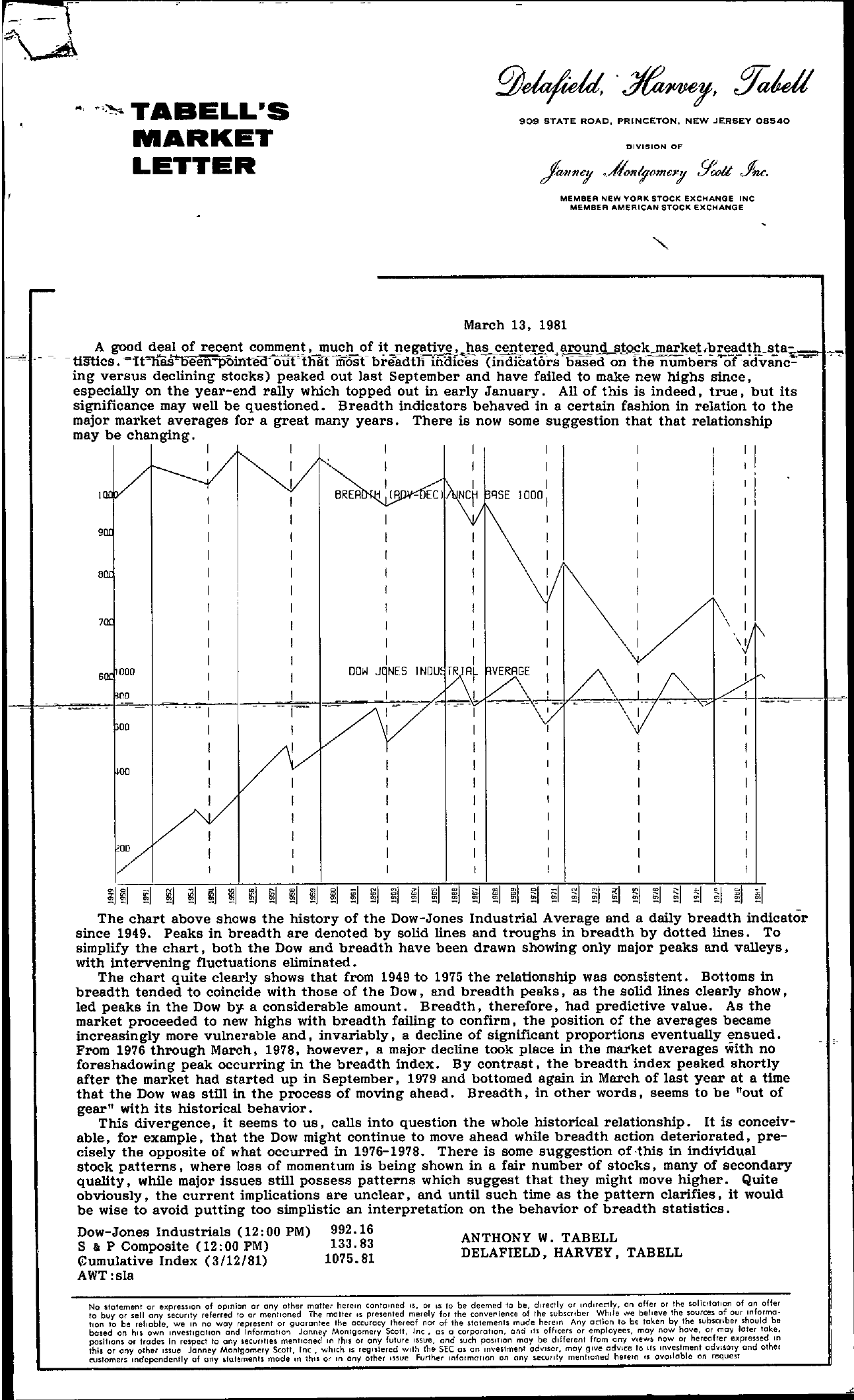 -T – -. -..,;..,.. TABELL'S MARKET LETTER 909 STATE ROAD, PRINCETON. NEW JERSEY 08540 DIVISION OF MEMBER New YORK STOCK EXCHANGE INC MEMBER AMERICAN STOCK eXCHANGE March 13, 1981 A good deal of recent comment, much of it Ilegative, has centered. arounLs!9gk.J!l!,ket,.bradth.sta – – tiatics. n'h8seenpfinteQ- ounrt most- breadtfiffidfces (iridicators .based on thenumbers-oradvanc' -. ing versus declining stocks) peaked out last September and have failed to make new highs since, especially on the year-end rally which topped out in early January. All of this is indeed, true, but its significance may well be questioned. Breadth indicators behaved in a certain fashion in relation to the major market averages for a great many years. There is now some suggestion that that relationship may be changing. lrn/Ir–yI II cI qSE II I I \v' 90C II II II I II I I BOC II I II I I I, I I II I I I II II I \'oc II I II I \I I I II I I I\ – -. soc 000 – – – o-o 00 II I II I I P\t /\ /\I — ,. I VV- \I I I – – — i I DOH J9NES INDU I -I I 0 ,I !. I I \ . / ,r- – I .– – – II / YI 00 I ! I I II II II I I I I I I /Y I I I I II I II I II I I I I I I / I I I I I II I I! I I I I I I I I I I I I I I I I I I I I I I I I I i I i i i i I i I M I I The chart above shows the history of the Dow-Jones Industrisl Average and a daily breadth indicator since 1949. Peaks in breadth are denoted by solid lines and troughs in breadth by dotted lines. To simplify the chart, both the Dow and breadth have been drawn showing only major peaks and valleys, with intervening fluctuations eliminated. The chart quite clearly shows that from 1949 to 1975 the relationship was consistent. Bottoms in breadth tended to coincide with those of the Dow, and breadth peaks, as the solid lines clearly show, led peaks in the Dow by a considerable amount. Breadth, therefore, had predictive vslue. As the market proceeded to new highs with breadth failing to confirm, the position of the averages became increasingly more vulnerable and, invariably, a decline of significant proportions eventually ensued. From 1976 through March, 1978, however, a major decline took place in the market averages with no foreshadowing peak occurring in the breadth index. By contrast, the breadth index peaked shortly after the market had started up in September, 1979 and bottomed again in March of last year at a time that the Dow was still in the process of moving ahead. Breadth, in other words, seems to be out of gear with its historical behavior. This divergence, it seems to us, calls into question the whole historicsl relationship. It is conceiv- able, for example, that the Dow might continue to move ahead while breadth action deteriorated, precisely the opposite of what occurred in 1976-1978. There is some suggestion of -this in individusl stock patterns, where loss of momentum is being shown in a fair number of stocks, many of secondary quslity, while major issues still possess patterns which suggest that they might move higher. Quite obviously, the current implications are unclear, and until such time as the pattern clarifies, it would be wise to avoid putting too simplistic an interpretation on the behavior of breadth statistics. Dow-Jones Industrials (1200 PM) SloP Composite (1200 PM) ;umulative Index (3/12/81) AWTsla 992.16 133.83 1075.81 ANTHONY W. TAB ELL DELAFIELD, HARVEY, TAB ELL No statement or expreSlon of opmlon or any other motter herein contCIned IS, or IS to be deemed to be, directly or Indirectly, an offer or the soliCitation of on offer to buy or sell any security referred to or mentioned The moiler IS pH!sented merely for the converlence of the subscrtber Whtle we belteve lhe sources of our tnformalion to be relllJble, we In no way represent or guarantee the accuracy Ihereaf nor of lhe slotements mude herem Any action to be toklln by the subSCriber should be based on hiS own Investigation and Informatlo! Janney Montgomllry SCali, Inc, as a corporation, and ,ts offIcers or employees, may now have, or may later toke, poslhons or trades In respect to any secuntles mentIoned In thIS or any future Issue, and such posItIon may be dIfferent from any vIews now or hereafter expressed In Ihls or ony othlH Issue Janney Montgomery Scott, Inc, wh,ch 1 regIstered WIth the SEC as on Investment adVisor, may gIve adVIce to 115 mvestment advuory and othel customers Independently of any statements mode 1M Ihn or In ony other Issue Further Inlmmo/lon on any secuflty menltoned hereIn 1 ovotloble on request 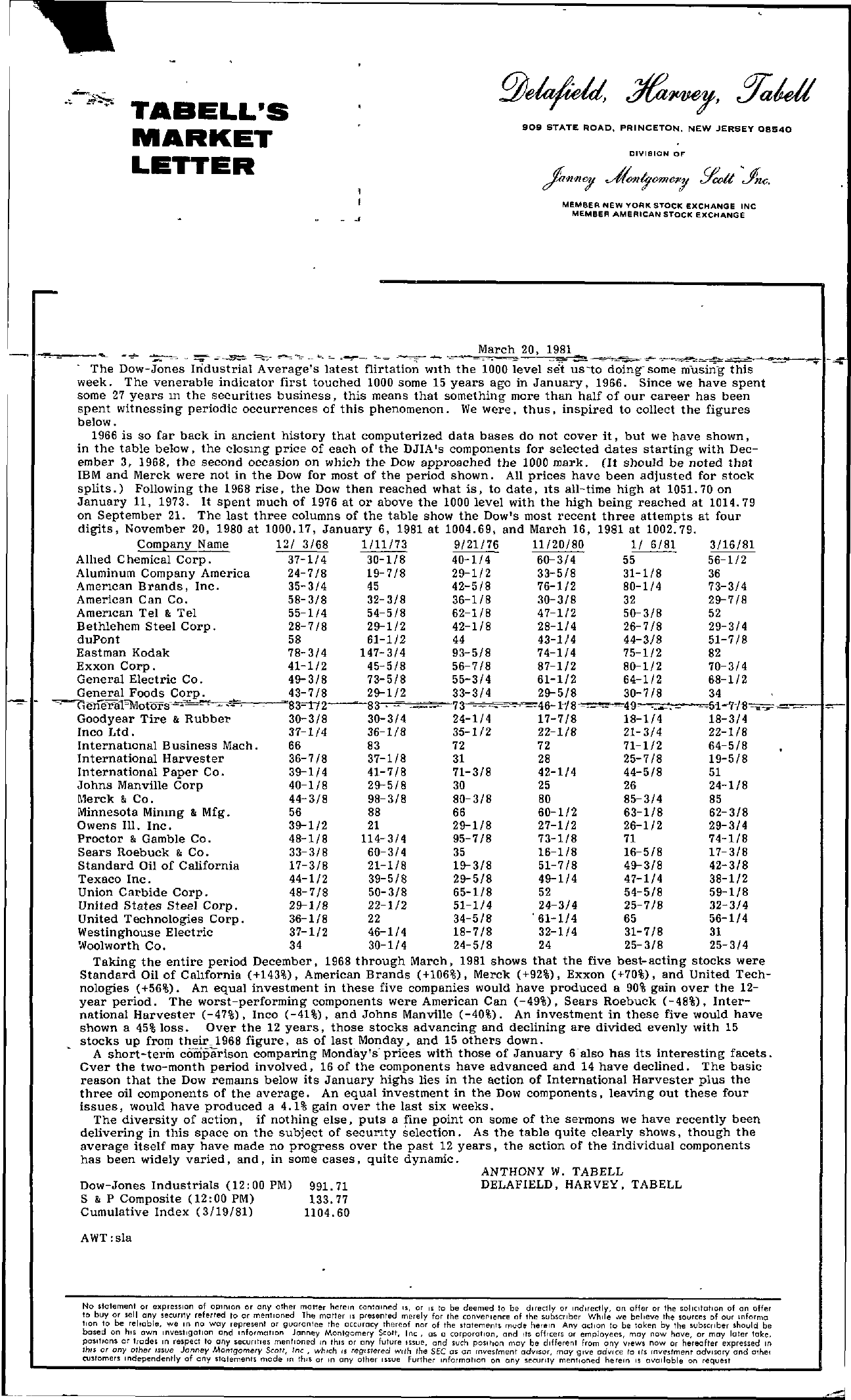 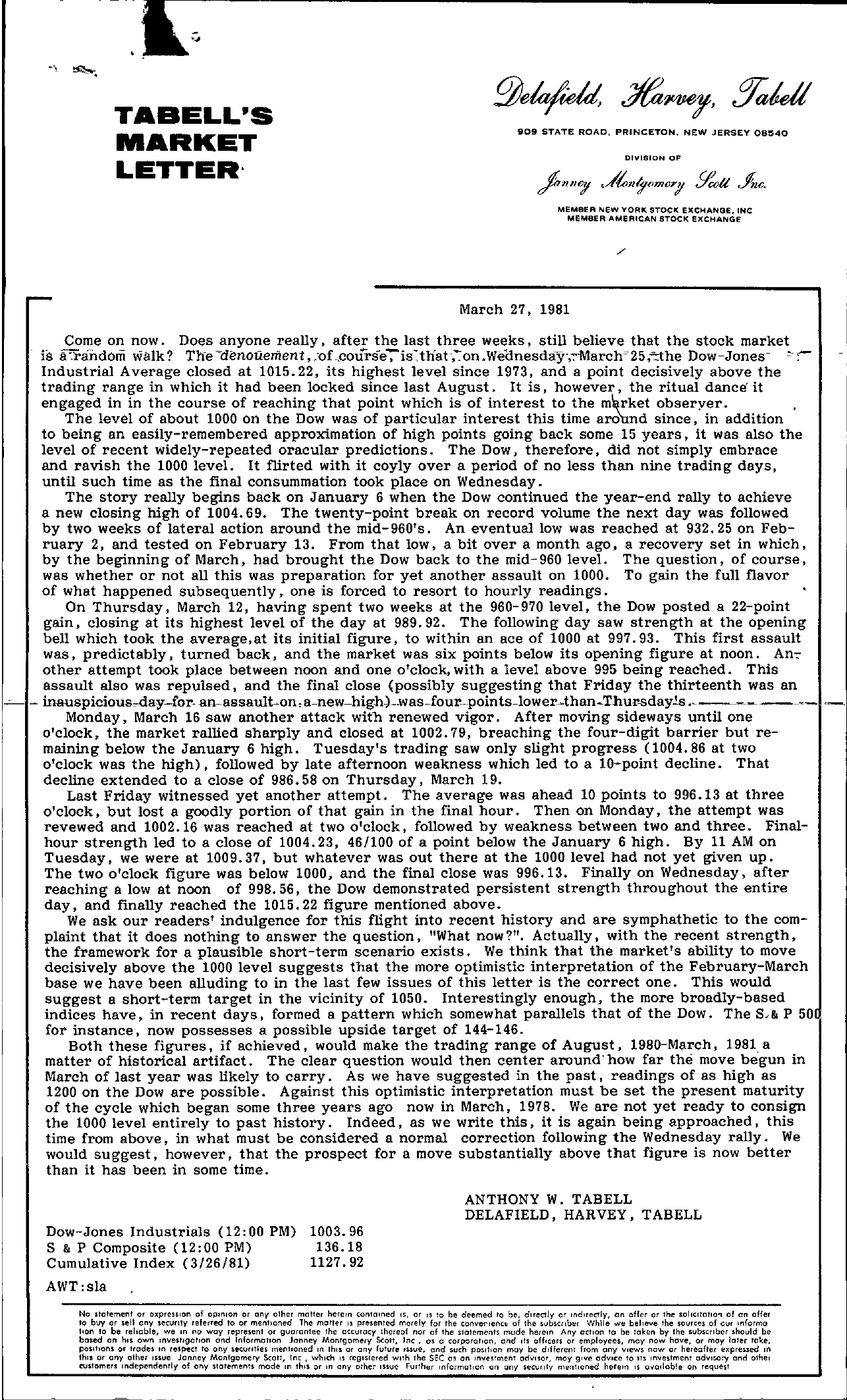