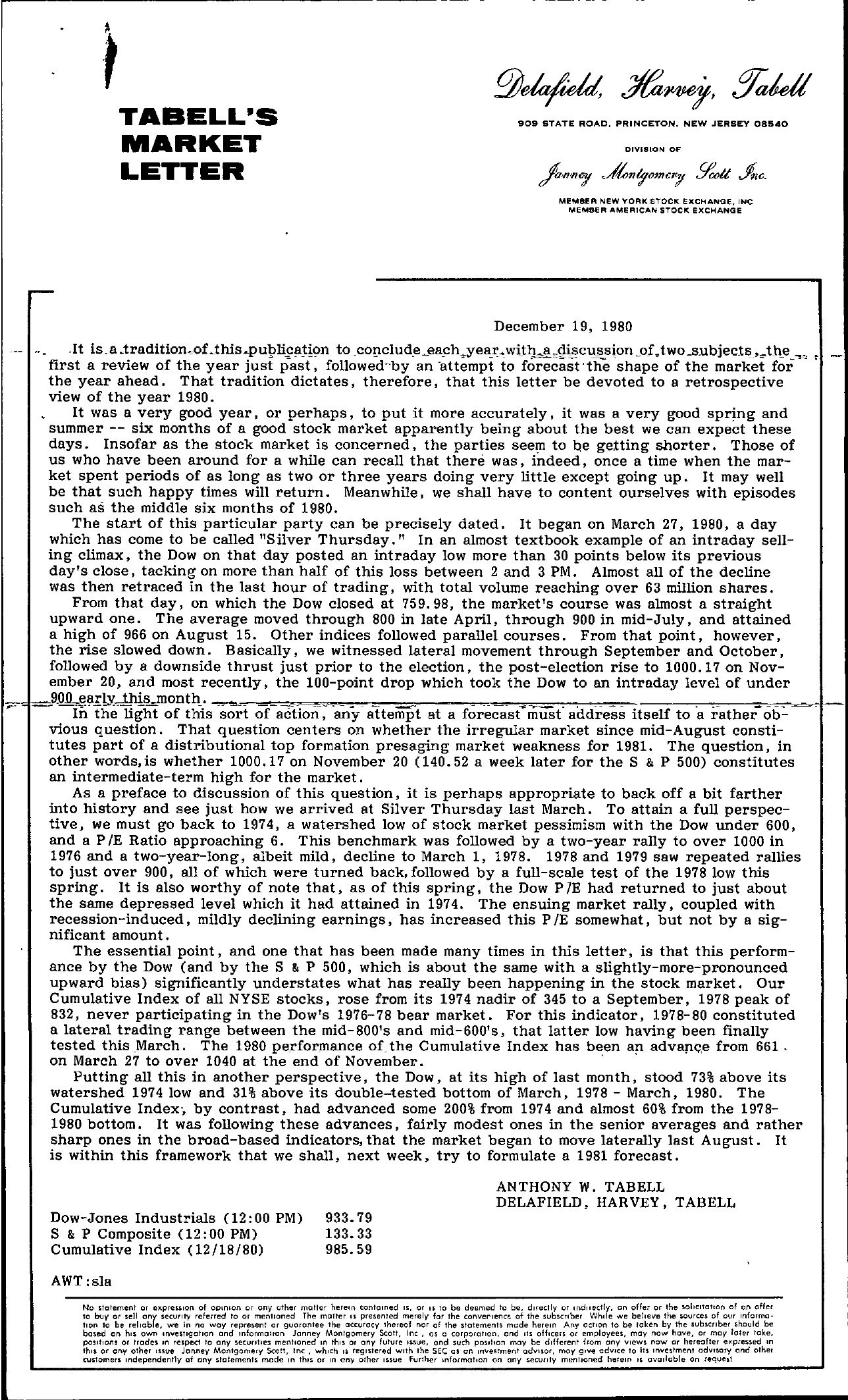 TABELL'S MARKET LETTER 909 STATE ROAD, PRINCETON. NEW JERSEY 08540 DIVISION OF MEM8ER New YORK STOCK EXCHANGE, INC MEMBER AMERICAN STOCI( EXCHANGE December 19, 1980 past;,It first a review of the year just to ,9Ltwosubjecls ,t.he . fOllowe-d-'byan 'attempt to forecast 'the 'shape of the market for' the year ahead. That tradition dictates, therefore, that this letter be devoted to a retrospective view of the year 1980. It was a very good year, or perhaps, to put it more accurately, it was a very good spring and summer — six months of a good stock market apparently being about the best we can expect these days. Insofar as the stock market is concerned, the parties see!'l to Qe geHing shorter. Those of us who have been around for a while can recall that there was, indeed, once a time when the mar- ket spent periods of as long as two or three years doing very little except going up. It may well be that such happy times will return. Meanwhile, we shall have to content ourselves with episodes such as the middle six months of 1980. The start of this particular party can be precisely dated. It began on March 27, 1980, a day which has come to be called Silver Thursday. In an almost textbook example of an intraday sell- ing climax, the Dow on that day posted an intraday low more than 30 points below its previous day's close, tacking on more than half of this loss between 2 and 3 PM. Almost all of the decline was then retraced in the last hour of trading, with total volume reaching over 63 million shares. From that day, on which the Dow closed at 759.98, the market's course was almost a straight upward one. The average moved through 800 in late April, through 900 in mid-July, and attained a high of 966 on August 15. Other indices followed parallel courses. From that point, however, the rise slowed down. Basically, we witnessed lateral movement through September and October, followed by a downside thrust just prior to the election, the post-election rise to 1000.17 on Nov- ember 20, and most recently, the 100-point drop which took the Dow to an intraday level of under r . ….-, ' . ' ,,' ' , ' , . -. , In the light of this sort of action, any attempt at a forecast must address itself to a rather ob- vious question. That question centers on whether the irregular market since mid-August consti- tutes part of a distributional top formation presaging market weakness for 1981. The question, in other words, is whether 1000.17 on November 20 (140.52 a week later for the S & P 500) constitutes an intermediate-term high for the market. As a preface to discussion of this question, it is perhaps appropriate to back off a bit farther into history and see just how we arrived at Silver Thursday last March. To attain a full perspec- tive, we must go back to 1974, a watershed low of stock market pessimism with the Dow under 600, and a P IE Ratio approaching 6. This benchmark was followed by a two-year rally to over 1000 in 1976 and a two-year-Iong, albeit mild, decline to March 1, 1978. 1978 and 1979 saw repeated rallies to just over 900, all of which were turned back, followed by a full-scale test of the 1978 low this spring. It is also worthy of note that, as of this spring, the Dow P lE had returned to just about the same depressed level which it had attained in 1974. The ensuing market rally, coupled with recession-induced, mildly declining earnings, has increased this P IE somewhat, but not by a sig- nificant amount. The essential point, and one that has been made many times in this letter, is that this perform- ance by the Dow (and by the S & P 500, which is about the same with a slightly-more-pronounced upward bias) significantly understates what has really been happening in the stock market. Our Cumulative Index of all NYSE stocks, rose from its 1974 nadir of 345 to a September, 1978 peak of 832, never participating in the Dow's 1976-78 bear market. For this indicator, 1978-80 constituted a lateral trading range between the mid-800's and mid-600's, that latter low having been finally tested this March. The 1980 performance of. the Cumulative Index has been an adv8p.c;,e from 661 ' on March 27 to over 1040 at the end of November. '' Putting all this in another perspective, the Dow, at its high of last month, stood 73 above its watershed 1974 low and 31 above its double-tested bottom of March, 1978 – March, 1980. The Cumulative Index', by contrast, had advanced some 200 from 1974 and almost 60 from the 1978- 1980 bottom. It was following these advances, fairly modest ones in the senior averages and rather sharp ones in the broad-based indicators, that the market began to move laterally last August. It is within this framework that we shall, next week, try to formulate a 1981 forecast. Dow-Jones Industrials (1200 PM) S & P Composite (1200 PM) Cumulative Index (12/18/80) 933.79 133.33 985.59 ANTHONY W. TAB ELL DELAFIELD, HARVEY, TABELL AWTsla No statement or expression of opInion or ony other motler herein contolned IS, or 1510 be deemed to be, directly or indirectly, on offer or the 5011(llollon of on offer 10 buy or sell onr. security referred to or mentioned The moiler IS prcsenled merely for Ihe corlVerlcnc!; of the subSCriber Whde we believe the sources of our Information to be reI lab e, we In na way represent ar guarantee the accuracy thereaf nor of the statements mode herem Any action to be token by the subSCriber should be based on hiS own investigation and mformohon Janney Montgomery Scott, Inc, as a corporallon, and lIs officers or employees, may now have, or may loler toke, positions or tradeS In respect to any securities mentioned In thiS or any future Issue, and such posItion may be different from any views now or herelfler e;pressed In thiS or any other Issue Janney Montgomery Scott, Inc, whICh IS regtered With the SEC as an Investment adVISor, may give adVice to 11 Investment adVISOry and othel C\lstomers Independently af any statements mode In thiS or In any other Issue Further information on any security mentioned herein 1 aVailable on request