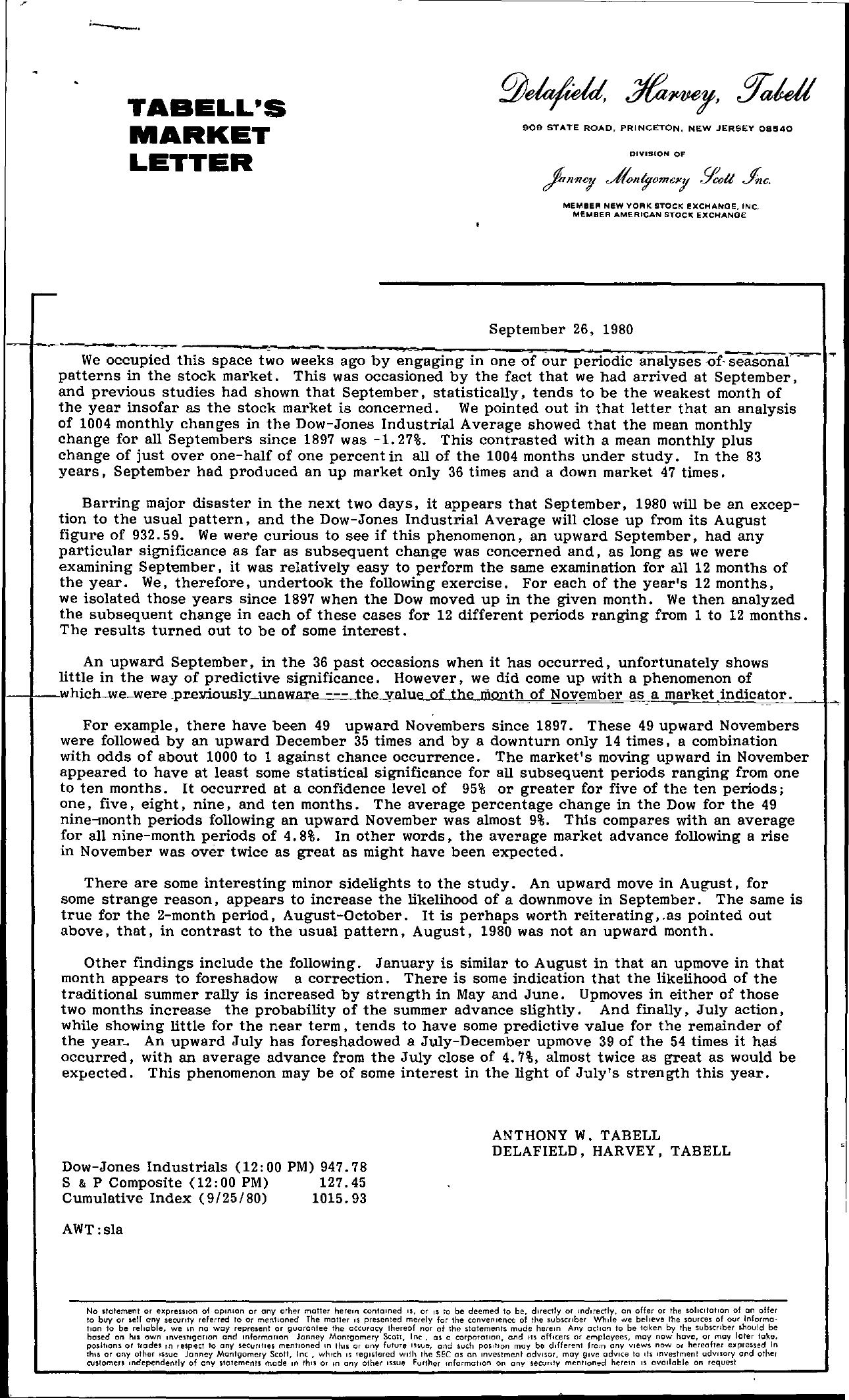 ———————————————————————————————————— ,—–. TABELL'S MARKET LETTER 909 STATE ROAD, PRINCETON, NEW JERSEY 08540 DIVISION OF MEMBER New VORK STOCK EXCHANCle, INC, MEMBER AMERICAN STOCK EXCHANGE September 26, 1980 We occupied this space two weeks ago by engaging in one of our periodic analyses patterns in the stock market. This was occasioned by the fact that we had arrived at September, and previous studies had shown that September, statistically, tends to be the weakest month of the year insofar as the stock market is concerned. We pointed out in that letter that an analysis of 1004 monthly changes in the Dow-Jones Industrial Average showed that the mean monthly change for all Septembers since 1897 was -1. 27. This contrasted with a mean monthly plus change of just over one-half of one percent in all of the 1004 months under study. In the 83 years, September had produced an up market only 36 times and a down market 47 times. Barring major disaster in the next two days, it appears that September, 1980 will be an exception to the usual pattern, and the Dow-Jones Industrial Average will close up from its August figure of 932.59. We were curious to see if this phenomenon, an upward September, had any particular significance as far as subsequent change was concerned and, as long as we were examining September, it was relatively easy to perform the same examination for all 12 months of the year. We, therefore, undertOOk the following exercise. For each of the year's 12 months, we isolated those years since 1897 when the Dow moved up in the given month. We then analyzed the subsequent change in each of these cases for 12 different periods ranging from 1 to 12 months. The results turned out to be of some interest. An upward September, in the 36 past occasions when it has occurred, unfortunately shows little in the way of predictive significance. However, we did come up with a phenomenon of — the…YJillle of the month .of November as. a m.arket indicator. For example, there have been 49 upward Novembers since 1897. These 49 upward Novembers were followed by an upward December 35 times and by a downturn only 14 times, a combination with odds of about 1000 to 1 against chance occurrence. The market's moving upward in November appeared to have at least some statistical significance for all subsequent periods ranging from one to ten months. It occurred at a confidence level of 95 or greater for five of the ten periods; one, five, eight, nine, and ten months. The average percentage change in the Dow for the 49 nine-month periods following an upward November was almost 9. This compares with an average for all nine-month periods of 4.8. In other words, the average market advance following a rise in November was over twice as great as might have been expected. There are some interesting minor Sidelights to the study. An upward move in August, for some strange reason, appears to increase the likelihood of a downmove in September. The same is true for the 2-month period, August-October. It is perhaps worth reiterating,.as pointed out above, that, in contrast to the usual pattern, August, 1980 was not an upward month. Other findings include the following. January is similar to August in that an upmove in that month appears to foreshadow a correction. There is some indication that the likelihood of the traditional summer rally is increased by strength in May and June. Upmoves in either of those two months increase the probability of the summer advance slightly. And finally, July action, while showing little for the near term, tends to have some predictive value for the remainder of the year.. An upward July has foreshadowed a July-December upmove 39 of the 54 times it has occurred, with an average advance from the July close of 4.7, almost twice as great as would be expected. This phenomenon may be of some interest in the light of July's strength this year. Dow-Jones Industrials (12 00 PM) 947.78 S & P Composite (12 00 PM) 127.45 Cumulative Index (9/25/80) 1015.93 AWTsla ANTHONY W. T ABELL DELAFIELD, HARVEY, TABELL No 510iement Of expression of opinion or ony other motler herein contolned IS, or , to be deemed to be, directly or ,nd,rectly, on offer or the SOl,Cllotlon of on offer to bvy or lell anI. security referred to or menhoned The matter 1 presented merely for the converllcnc() 01 the subSCriber While oNe believe the sources of our Informa- tion to be rei lob e, we In no wo,/ reprelent or guorolllee the accuracy thereof nor of the statements mude herem Any action to be token by the subSCriber be based on hIS own investigation and information Jonney Montgomery cotl, Inc, as 0 corporation, and 115 off,cers or employees, may now hove, or may loter toke, positions or lrodcs In respect to ony seCUrities mentIoned In thiS or ony future ond such pOSition moy be different from ony views now or hereafter epressed In Ih,s or ony other ,SS\J!;! Janney Montgomery Scott, Inc, which IS registered With the SEC 0 on Investment odvisor, may give adVice to ItS Investment adVisory and other customers ,ndependently of ony statements mode In thiS or ,n any other Issue Further Informotlon on ony securIty mentioned hereIn IS aVailable on request