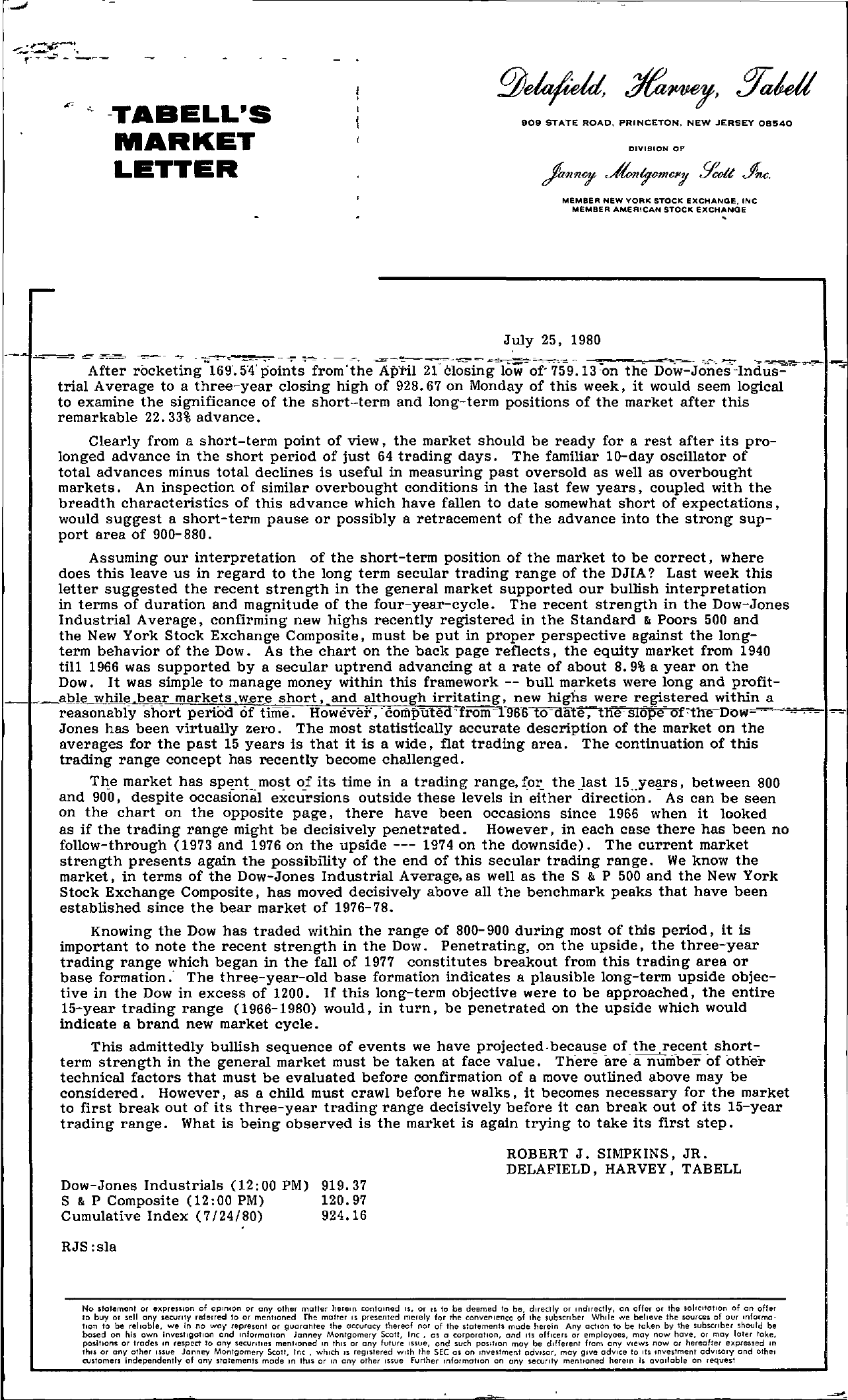 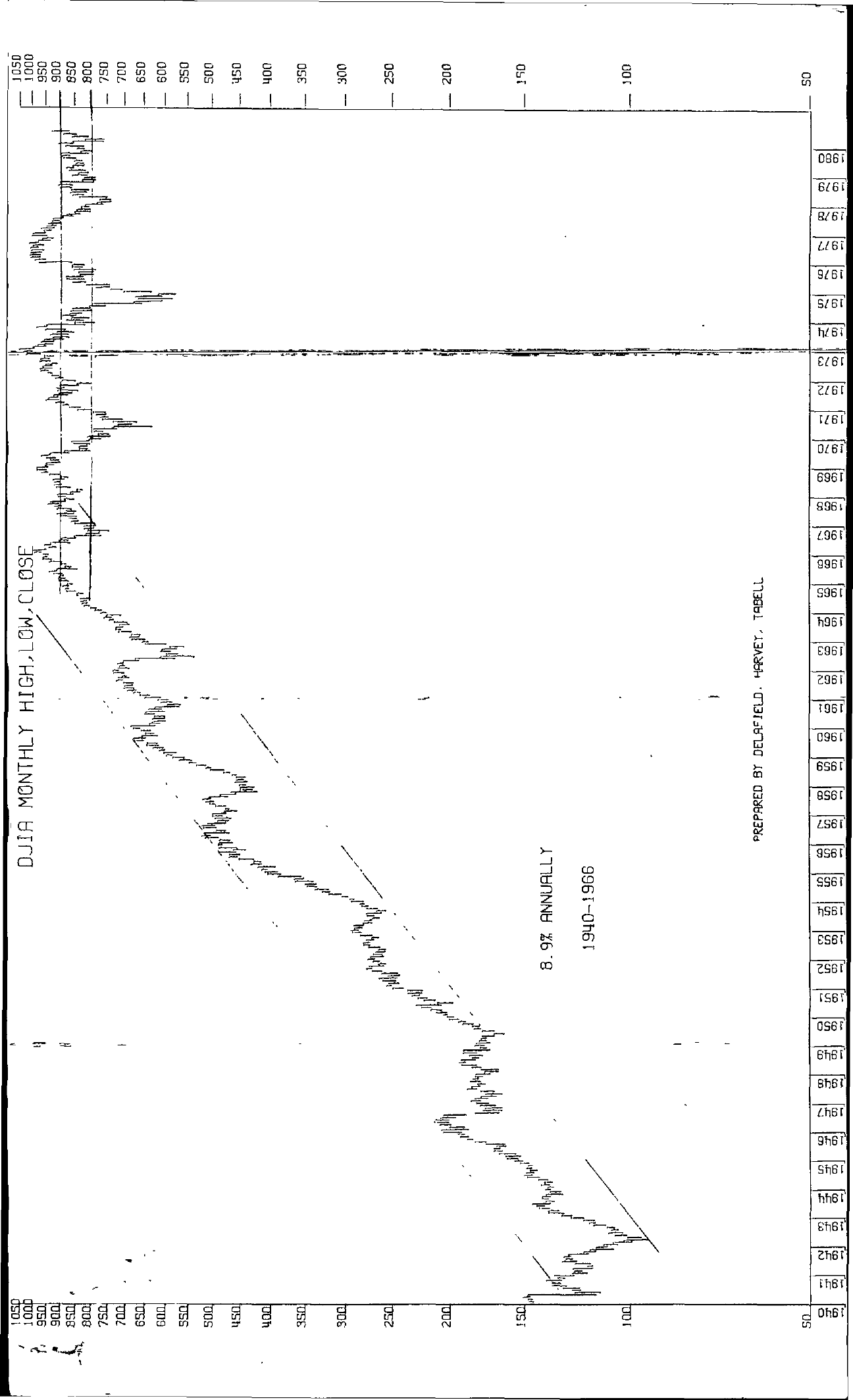 ,…,; – – – – – – – – – -TABELL'S MARKET LETTER 909 STATE ROAD. PRINCETON, NEW JERSEY 08540 DIVISION OF MEMBER NEW YOAK STOCK EXCHANGE, INC MEMBER AMERICAN STOCK eXCHANGe July 25. 1980 —– —— …. – ' . – . – ' -…….. … After rocketing 169'.5'4' points from'the Aiitil 21 closing low of- 759.13 on the Dow-Jones -Indus- trial Average to a three-year closing high of 928.67 on Monday of this week. it would seem logical to examine the significance of the short-term and long-term positions of the market after this remarkable 22.33 advance. —r Clearly from a short-term point of view. the market should be ready for a rest after its prolonged advance in the short period of just 64 trading days. The familiar 10-day oscillator of total advances minus total declines is useful in measuring past oversold as well as overbought markets. An inspection of similar overbought conditions in the last few years. coupled with the breadth characteristics of this advance which have fallen to date somewhat short of expectations. would suggest a short-term pause or possibly a retracement of the advance into the strong support area of 900- 880. Assuming our interpretation of the short-term position of the market to be correct. where does this leave us in regard to the long term secular trading range of the DJIA Last week this letter suggested the recent strength in the general market supported our bullish interpretation in terms of duration and magnitude of the four-year-cycle. The recent strength in the Dow-Jones Industrial Average. confirming new highs recently registered in the Standard 8. Poors 500 and the New York Stock Exchange Composite. must be put in proper perspective against the long- term behavior of the Dow. As the chart on the back page reflects. the equity market from 1940 till 1966 was supported by a secular uptrend advancing at a rate of about 8.9 a year on the Dow. It was simple to manage money within this framework — bull markets were long and profit- able while bear markets,were short. and although irritating. new highs were registered within a reasonably short period of time. However. -computed 'from slope- — – — Jones has been virtually zero. The most statistically accurate description of the market on the averages for the past 15 years is that it is a wide. flat trading area. The continuation of this trading range concept has recently become challenged. The market has spentmost oJ its time in a trading range. for. the Jast lS,ye1!rs. between 800 and 900. despite occasional excursions outside these levels in either direction. As can be seen on the chart on the opposite page. there have been occasions since 1966 when it looked as if the trading range might be decisively penetrated. However. in each case there has been no follow-through (1973 and 1976 on the upside — 1974 on the downside). The current market strength presents again the possibility of the end of this secular trading range. We know the market. in terms of the Dow-Jones Industrial Average. as well as the S 8. P 500 and the New York Stock Exchange Composite. has moved decisively above all the benchmark peaks that have been established since the bear market of 1976-78. Knowing the Dow has traded within the range of 800-900 during most of this period. it is important to note the recent strength in the Dow. Penetrating. on the upside. the three-year trading range which began in the fall of 1977 constitutes breakout from this trading area or base formation The three-year-old base formation indicates a plausible long-term upside objective in the Dow in excess of 1200. If this long-term objective were to be approached. the entire 15-year trading range (1966-1980) would. in turn. be penetrated on the upside which would indicate a brand new market cycle. This admittedly bullish sequence of events we have projected, because of the recellt shortterm strength in the general market must be taken at face value. There are a nu-fiber of other technical factors that must be evaluated before confirmation of a move outlined above may be considered. However. as a child must crawl before he walks. it becomes necessary for the market to first break out of its three-year trading range decisively before it can break out of its 15-year trading range. What is being observed is the market is again trying to take its first step. Dow-Jones Industrials (12 00 PM) 919.37 S 8. P Composite (12 00 PM) 120.97 Cumulative Index (7/24/80) 924.16 ROBERT J. SIMPKINS. JR. DELAFIELD. HARVEY. TAB ELL RJS sla No statement or e)(pre5S10n of opinIon or ony other motter here'n contolned IS, or 15 to be deemed 10 be, directly or Indlrt!dly, on Offt!f or the SohClfotlon of on offer 10 buy or sell ony security referred to or menlloned The molter IS presented merely for the conver-Iena; of the subscriber While we believe the sources of our Informo- han to be reliable, we In no way represent or guarantee the accuracy thereof nor of the statements mode herein Any action to be to!..en by the subSCriber should be based on his own Investigation and Information Janney Montgomery Scott, Inc, as a corporation, and It5 offICers or employees, may now have, or may later toke, positions or trades In respect 10 any seCUrities mentioned In thiS or any future Issue, and such position moy be different from any views now or hereafter expressed In thiS or ony other Issue Janney Montgomery ScoT!, tnc , which IS registered With the SEC 0 on mvestment adVisor, may give adVice 10 lIs Investment adVisory and othel customers Independently of any statements mode In tnlS or m any other Issue Further mformatlon on any security menhoncd herein Is available on request '00 Io-t,Io-)1momoo0()o('QJo') Oo(o(r-)- 0 0 t- 0 U) eo 0 0 CD 0 U) U) 0 0 U) II I I I I I I I I I T – '– 0 til I c 0 I 0 tn 1 I c 0 0; I I 0 U) N I 0 to N I 0u- I c 0 I — — .-J a.-J CD CD J OJ Z , aZ I 0r &-E OJ (J CO 0 U) I 096i' 6/6T fItS I usr 9t6f St6T nLSf ELSI VSI IL61 OLSf 696r' fI9S. L9SI' …J …J W il r- ,.. w r – 996i' 596r' h9S1 -E9S1 C9S1 !96i' 09Sr' q )-. SSsr' 'q w BSSI L W LSsr' 1(' 9s6t' -SSSI nssl ESSI CSSI ISSI 0s6r' ShSr' BhSI Lhsl 9hSI Sii6I hilS I' I1SI Ghsr Ihsr' 5-, OnSI