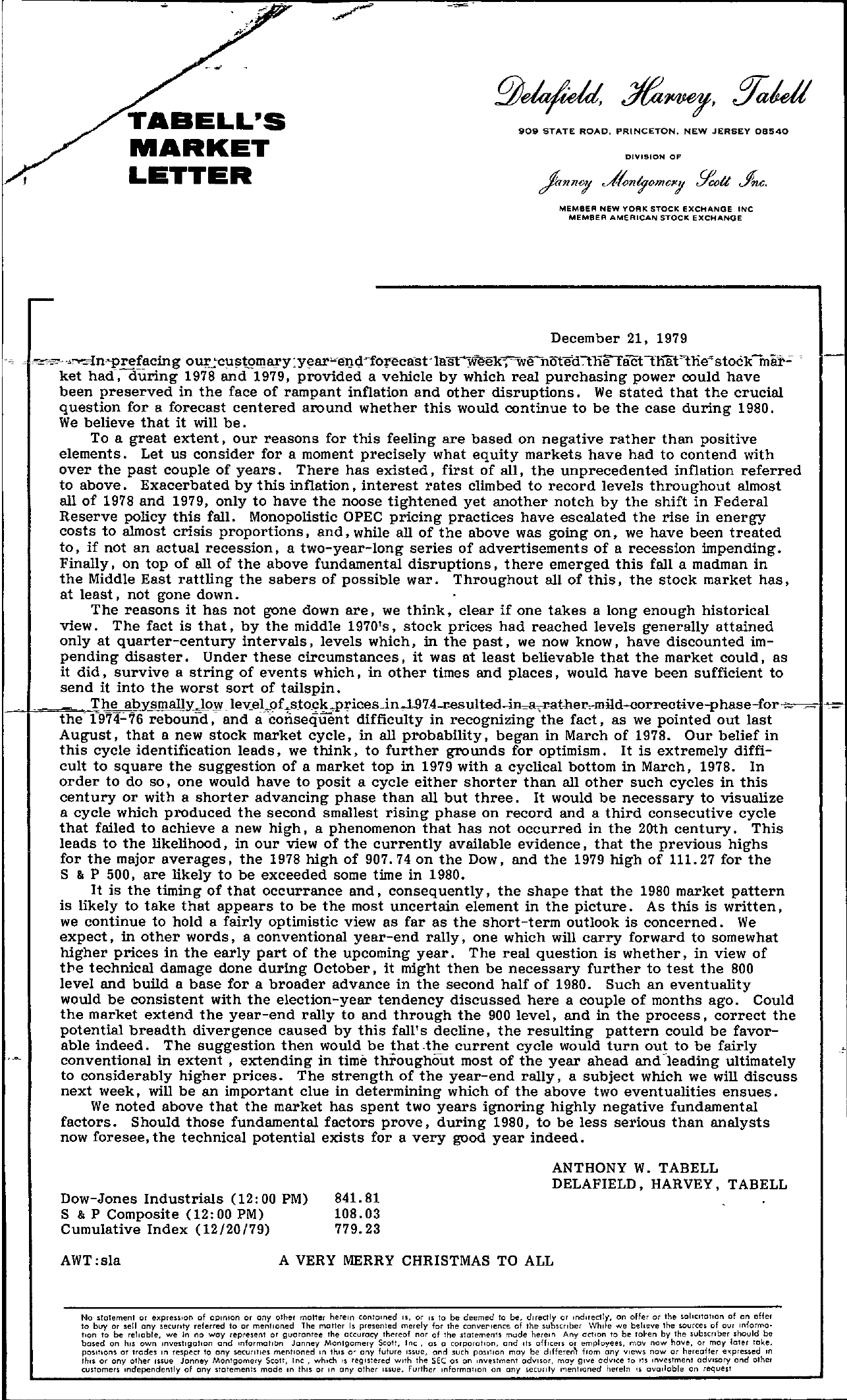 TABELL'S MARKET LETTER 909 STATE ROAD, PRINCETON, NEW JERSEY 08540 DIVISION OF MEM8ER New VORK STOCK EXCHANGE INC MEMBER AMERICAN STOCK EXCHANGE December 21, 1979 .— .. our,,cu1tQmary wenoted-t1ieTact -mar.o . ket had-, during 1978 and 1979, provided a vehicle by which real purchasing power could have been preserved in the face of rampant inflation and other disruptions. We stated that the crucial question for a forecast centered around whether this would continue to be the case during 1980. We believe that it will be. To a great extent, our reasons for this feeling are based on negative rather than positive elements. Let us consider for a moment precisely what equity markets have had to contend with over the past couple of years. There has existed, first of all, the unprecedented inflation referred to above. Exacerbated by this inflation, interest rates climbed to record levels throughout almost all of 1978 and 1979, only to have the noose tightened yet another notch by the shift in Federal Reserve policy this fall. Monopolistic OPEC pricing practices have escalated the rise in energy costs to almost crisis proportions, and, while all of the above was going on, we have been treated to, if not an actual recession, a two-year-long series of advertisements of a recession impending. Finally, on top of all of the above fundamental disruptions, there emerged this fall a madman in the Middle East rattling the sabers of possible war. Throughout all of this, the stock market has, at least, not gone down. The reasons it has not gone down are, we think, clear if one takes a long enough historical view. The fact is that, by the middle 1970's, stock prices had reached levels generally attained only at quarter-century intervals, levels which, in the past, we now know, have discounted im- pending disaster. Under these circumstances, it was at least believable that the market could, as it did, survive a string of events which, in other times and places, would have been sufficient to send it into the worst sort of tailspin. a!;.ysmally.J9.w – the 19'74'' 76 rebound,- and a consequent difficulty in recognizing the fact, as we pointed out last August, that a new stock market cycle, in all probability, began in March of 1978. Our belief in this cycle identification leads, we think, to further grounds for optimism. It is extremely diffi- cult to square the suggestion of a market top in 1979 with a cyclical bottom in March, 1978. In order to do so, one would have to posit a cycle either shorter than all other such cycles in this century or with a shorter advancing phase than all but three. It would be necessary to visualize a cycle which produced the second smallest rising phase on record and a third consecutive cycle that failed to achieve a new high, a phenomenon that has not occurred in the 20th century. This leads to the likelihood, in our view of the currently available evidence, that the previous highs for the major averages, the 1978 high of 907.74 on the Dow, and the 1979 high of 111.27 for the S & P 500, are likely to be exceeded some time in 1980. It is the timing of that occurrance and, consequently, the shape that the 1980 market pattern is likely to take that appears to be the most uncertain element in the picture. As this is written, we continue to hold a fairly optimistic view as far as the short-term outlook is concerned. We expect, in other words, a conventional year-end rally, one which will carry forward to somewhat higher prices in the early part of the upcoming year. The real question is whether, in view of tpe technical damage done during October, it might then be necessary further to test the 800 level and build a base for a broader advance in the second half of 1980. Such an eventuality would be consistent with the election-year tendency discussed here a couple of months ago. Could the market extend the year-end rally to and through the 900 level, and in the process, correct the potential breadth divergence caused by this fall's decline, the resulting pattern could be favor- able indeed. The suggestion then would be that .the current cycle would turn out to be fairly conventional in extent, extending in time throughout most of the year ahead and leading ultimately to considerably higher prices. The strength of the year-end rally, a subject which we will discuss next week, will be an important clue in determining which of the above two eventualities ensues. We noted above that the market has spent two years ignoring highly negative fundamental factors. Should those fundamental factors prove, during 1980, to be less serious than analysts now foresee, the technical potential exists for a very good year indeed. Dow-Jones Industrials (12 00 PM) S 81 P Composite (1200 PM) Cumulative Index (12/20/79) 841. 81 108.03 779.23 ANTHONY W. TABELL DELAFIELD, HARVEY, TABELL AWTsla A VERY MERRY CHRISTMAS TO ALL .' No statement or expressIon of opmlon or any other motter herein con tamed IS, or IS to be deemed to be, directly or Indirectly, on offer or the soilcltohon of on offer to buy or sell any securoty referred to or mentioned The molter Is presented merely for the of Ihe subSCriber Wh.le 'i'le believe Ihe sources of our Informo- t.on to be rel.oble, we In no way represent or guarantee the accuracy thereof nor of the sotements mude here.n Any act.on to be by the subscr.ber should be bosed on h.s own Invest'gotlon and ,nformat.tln Janney Montgomery Scolt, Inc, as a corporat.on, and .ts offICers or employees, mav now have, or may later lake, pOSitions Of trades In respect to any securities ment.oned ,n th,s 0' any future Issue, ond such POSItion moy be from ony vIews now or hereafter exprcned In thIS or any other lSsue Janney MOntgomery Scott, Inc, whIch IS regIstered WIth the SEC as on Investment adVisor, may give adVICe to Its .nvestmenl adVIsory and other customers Independently of any statements mode 1M thiS or In any other Issue. Further informatIon on ony security Mentioned herein IS ovollable on request