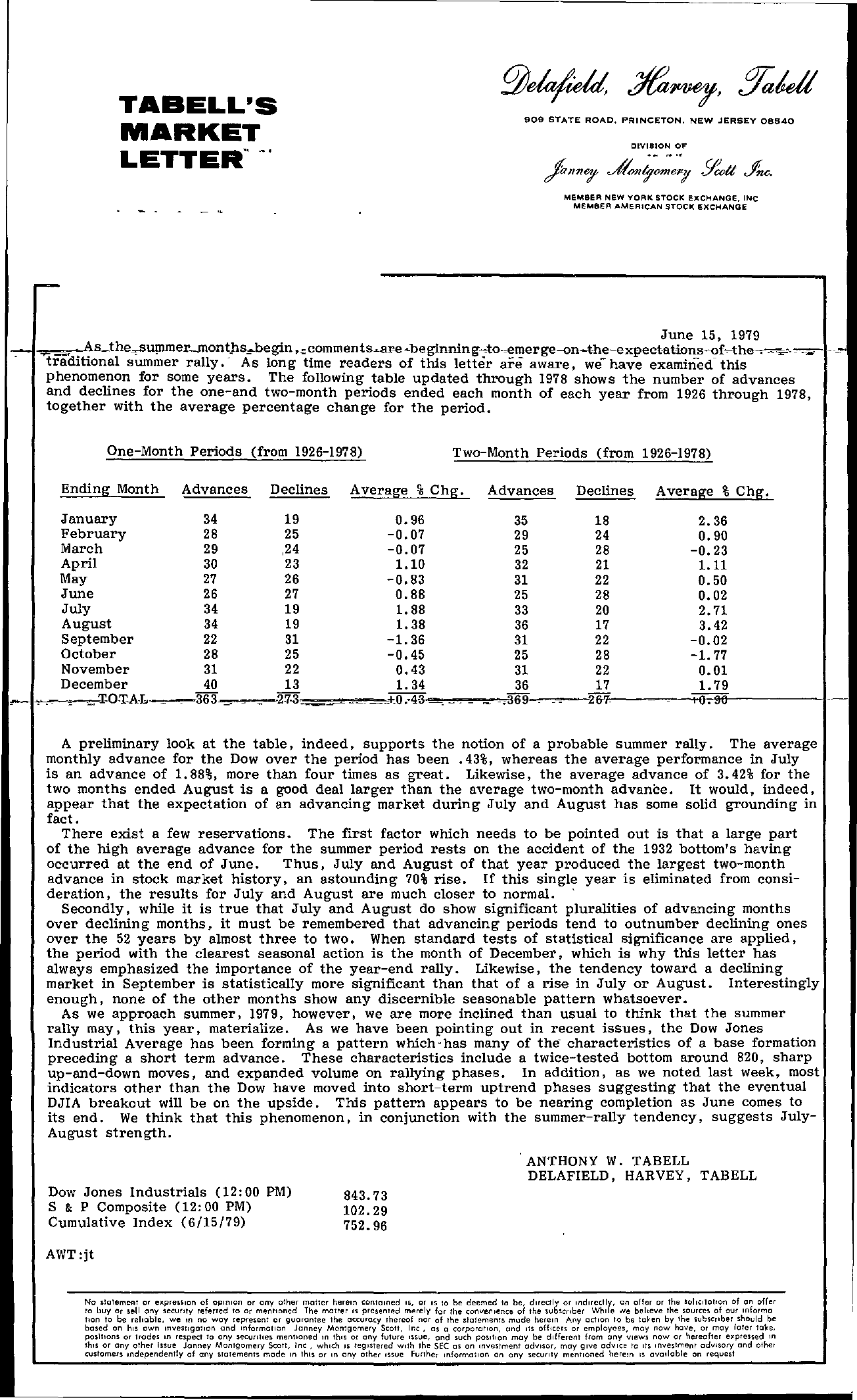 TABELL'S MARKET LETTER' . 909 STATE ROAD, PRINCETON, NEW JERSEY 08540 DIVISION OF cfoll1ly Jim,;;;;.!! Y/tt JnC. MEMBER NEW YORK STOCK EXCHANGE, INC MEMBER .AMERICAN STOCK EXCHANGE June 15, 1979 summer rally.' As time readers of this are aware, we- have this phenomenon for some years. The following table updated through 1978 shows the number of advances and declines for the one-and two-month periods ended each month of each year from 1926 through 1978, together with the average percentage change for the period. One-Month Periods (from 1926-1978) Two-Month Periods (from 1926-1978) Ending Month January February March April May June July August September October November December Advances 34 28 29 30 27 26 34 34 22 28 31 40 Declines 19 25 .24 23 26 27 19 19 31 25 22 13 Average Chg. 0.96 -0.07 -0.07 1.10 -0.83 0.88 1. 88 1. 38 -1. 36 -0.45 0.43 1. 34 Advances 35 29 25 32 31 25 33 36 31 25 31 Declines 18 24 28 21 22 28 20 17 22 28 22 17 Average Chg. 2.36 0.90 -0.23 1.11 0.50 0.02 2.71 3.42 -0.02 -1. 77 0.01 A preliminary look at the table, indeed, supports the notion of a probable summer rally. The average monthly advance for the Dow over the period has been .43, whereas the average performance in July is an advance of 1. 88, more than four times as great. Likewise, the average advance of 3.42 for the two months ended August is a good deal larger than the average two-month advance. It would, indeed, appear that the expectation of an advancing market during July and August has some solid grounding in fact. There exist a few reservations. The first factor which needs to be pointed out is that a large part of the high average advance for the summer period rests on the accident of the 1932 bottom's having occurred at the end of June. Thus, July and August of that year produced the largest two-month advance in stock market history, an astounding 70 rise. If this single year is eliminated from consideration, the results for July and August are much closer to normal. ' Secondly, while it is true that July and August do show significant pluralities of advancing months over declining months, it must be remembered that advancing periods tend to outnumber declining ones over the 52 years by almost three to two. When standard tests of statistical Significance are applied, the period with the clearest seasonal action is the month of December, which is why this letter has always emphasized the importance of the year-end rally. Likewise, the tendency toward a declining market in September is statistically more significant than that of a rise in July or August. Interestingly enough, none of the other months show any discernible seasonable pattern whatsoever. As we approach summer, 1979, however, We are more inclined than usual to think that the summer rally may, this year, materialize. As we have been pointing out in recent issues, the Dow Jones Industrial Average has been forming a pattern which' has many of the characteristics of a base formation preceding a short term advance. These characteristics include a twice-tested bottom around 820, sharp up-and-down moves, and expanded volume On rallying phases. In addition, as we noted last week, most indicators other than the Dow have moved into short-term uptrend phases suggesting that the eventual DJIA breakout will be on the upside. This pattern appears to be nearing completion as June comes to its end. We think that this phenomenon, in conjunction with the summer-rally tendency, suggests July- August strength. Dow Jones Industrials (12 00 PM) S & P Composite (12 00 PM) Cumulative Index (6/15/79) 843.73 102.29 752.96 ANTHONY W. TABELL DELAFIELD, HARVEY, TABELL AWTjt No statement or e)prenlon of opinion or ony olher matter herein contained IS, or IS to be deemed to be, directly or ,ndirectly, on offer or the SOllCllollon of on offer to buy or sell any security referred to or mentioned The moiler IS presenTed merely for the conveflience of the subSCriber While Ill' believe the SOurces of our Informo han to be rehable, we In no woy represent or guorantee the occurocy Ihereof nor of the mude herein Any action 1-0 be by the subSCriber should be based on hiS own InveStlgOllon and Information Janney Montgomery Seoll. Inc, 0 a corporation. and 11 offICers or employees, moy now have. or may 10lCr lOire. pOllhons or Irodes In respect fa any secuntlel mentioned In thiS or any future Issue. ond such pOSition may be different from ony Views now or hereafter In thn or any other Issue Janney Montgomery Scott, Inc. which IS regiStered With Ihe SEC as on Investment adVisor, may give adVice to Its Investment adVIsory and othel customers mdependently of any stotements mode m thiS or In any other Issue Further mformalon on any secunty mentioned herem IS o'/otiable on request