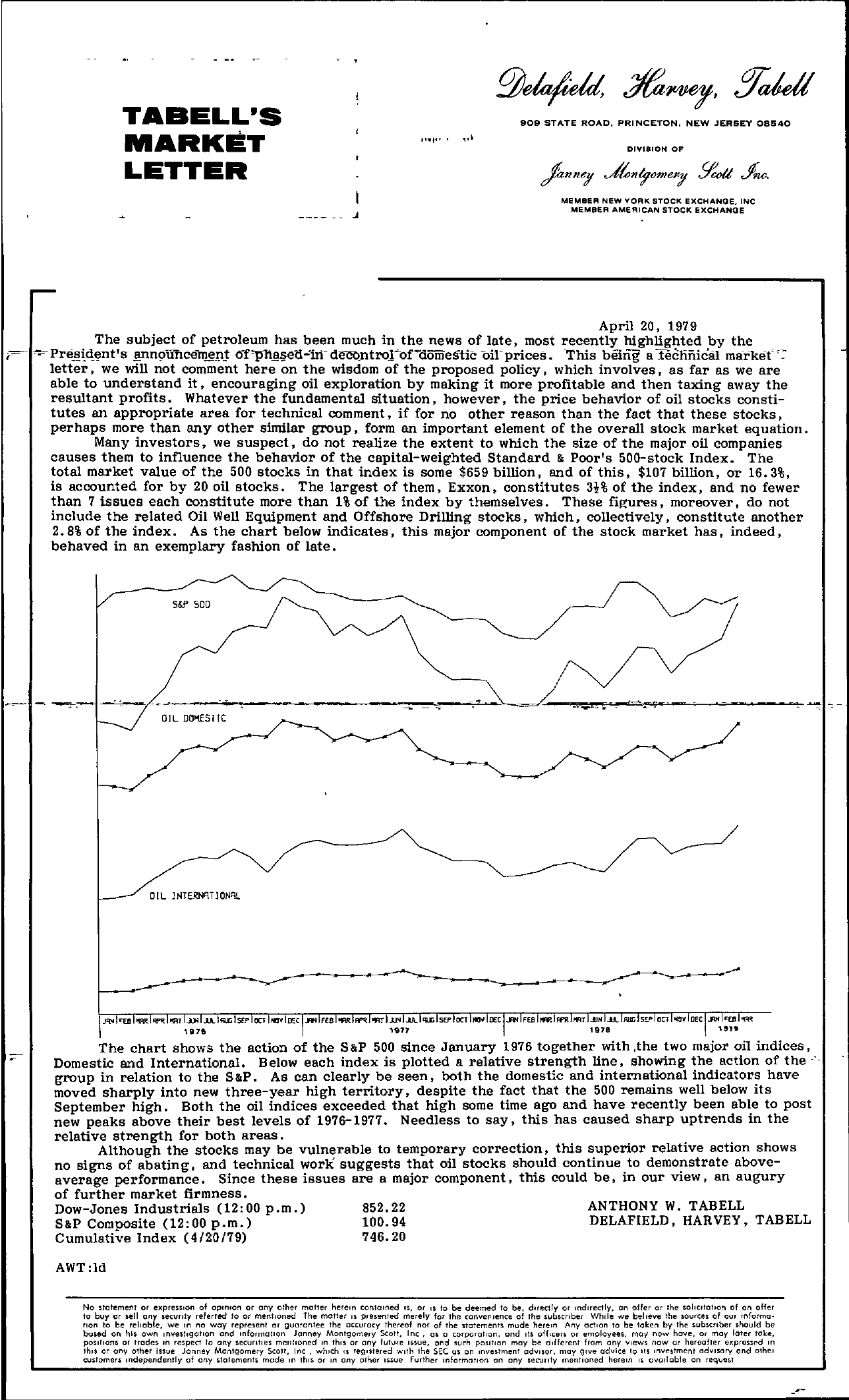 TABELL'S MARKET LETTER I' ,. 909 STATE ROAD, PRINCETON, NEW .JERSEY 08540 DIVISION OF MEMBER New VORK STOCK EXCHANOE, INC MEMBER AMERICAN STOCK EXCHANQE April 20, 1979 The subject of petroleum has been much in the news of late, most recently highlighted by the jIIlnounce-m.J!I'lt crfPli1!eoirt-decontrorordomestic oirprices. -This being a tecfiiiicaI letter, we will not comment here on the wisdom of the proposed policy, which involves, as far as we are able to understand it, encouraging oil exploration by making it more profitable and then taxing away the resultant profits. Whatever the fundamental situation, however, the price behavior of oil stocks constitutes an appropriate area for technical comment, if for no other reason than the fact that these stocks, perhaps more than any other similar group, form an important element of the overall stock market equation. Many investors, we suspect, do not realize the extent to which the size of the major oil companies causes them to influence the behavior of the capital-weighted Standard 110 Poor's 50o-stock Index. The total market value of the 500 stocks in that index is some 659 billion, and of this, 107 billion, or 16.3, is accounted for by 20 oil stocks. The largest of them, Exxon, constitutes 3t of the index, and no fewer than 7 issues each constitute more than 1 of the index by themselves. These figures, moreover, do not include the related Oil Well Equipment and Offshore Drilling stocks, which, collectively, constitute another 2.8 of the index. As the chart below indicates, this major component of the stock market has, indeed, behaved in an exemplary fashion of late. S&I' SOO – — –'—/ OIL DDt-tESilC The chart shows the action of the S IIoP 500 since January 1976 together with ,the two major oil indices, Domestic and International. Below each index is plotted a relative strength line, showing the action of the group in relation to the S&P. As can clearly be seen, both the domestic and international indicators have moved sharply into new three-year high territory, despite the fact that the 500 remains well below its September high. Both the oil indices exceeded that high some time ago and have recently been able to post new peaks above their best levels of 1976-1977. Needless to say, this has caused sharp uptrends in the relative strength for both areas. Although the stocks may be vulnerable to temporary correction, this superior relative action shows no signs of abating, and technical work suggests that oil stocks should continue to demonstrate above- average performance. Since these issues are a major component, this could be, in our view, an augury of further market firmness. Dow-Jones Industrials (1200 p.m.) S&P Composite (1200 p.m.) Cumulative Index (4/20/79) 852.22 100.94 746.20 ANTHONY W. TABELL DELAFIELD, HARVEY, TAB ELL AWTld No statement or expreSSion of opIniOn or ony other motter herein contolned IS, or IS 10 be deemed to be, directly or indirectly, on offer or the SoliCIlotlon of on offer to buy or sell any security referred to or mentioned The moiler 1 presented merely for the convenumce of the subSCriber V/hde -He believe the sources of our IOformo tlon to be reliable, we In no way represent or guarantee the accuracy thereof nor of the statements mude herein Any action to be laken by the subscnber should be based on his own inVestigation and Informal Ion Janney Montgomery Scott, Inc, as a corporalton, ond Its officers or employees, may now have, or may loler lake, posilions or trodes 10 respect to ony secufltles mentioned In thiS or ony fulure ISSUe, ond such POSition may be different from ony views now or hereafter expressed 10 thiS or any other Issue Janney Montgomery cott, Inc, whICh IS registered With Ihe SEC as on Investment odvisor, moy grve advice to 1/5 Investment odYlsory ond othel customers Independently of ony stotements mode In thiS or tn ony other Issue Further tnfOrmotlNI on ony secuflty mentIOned herein IS available on requesl