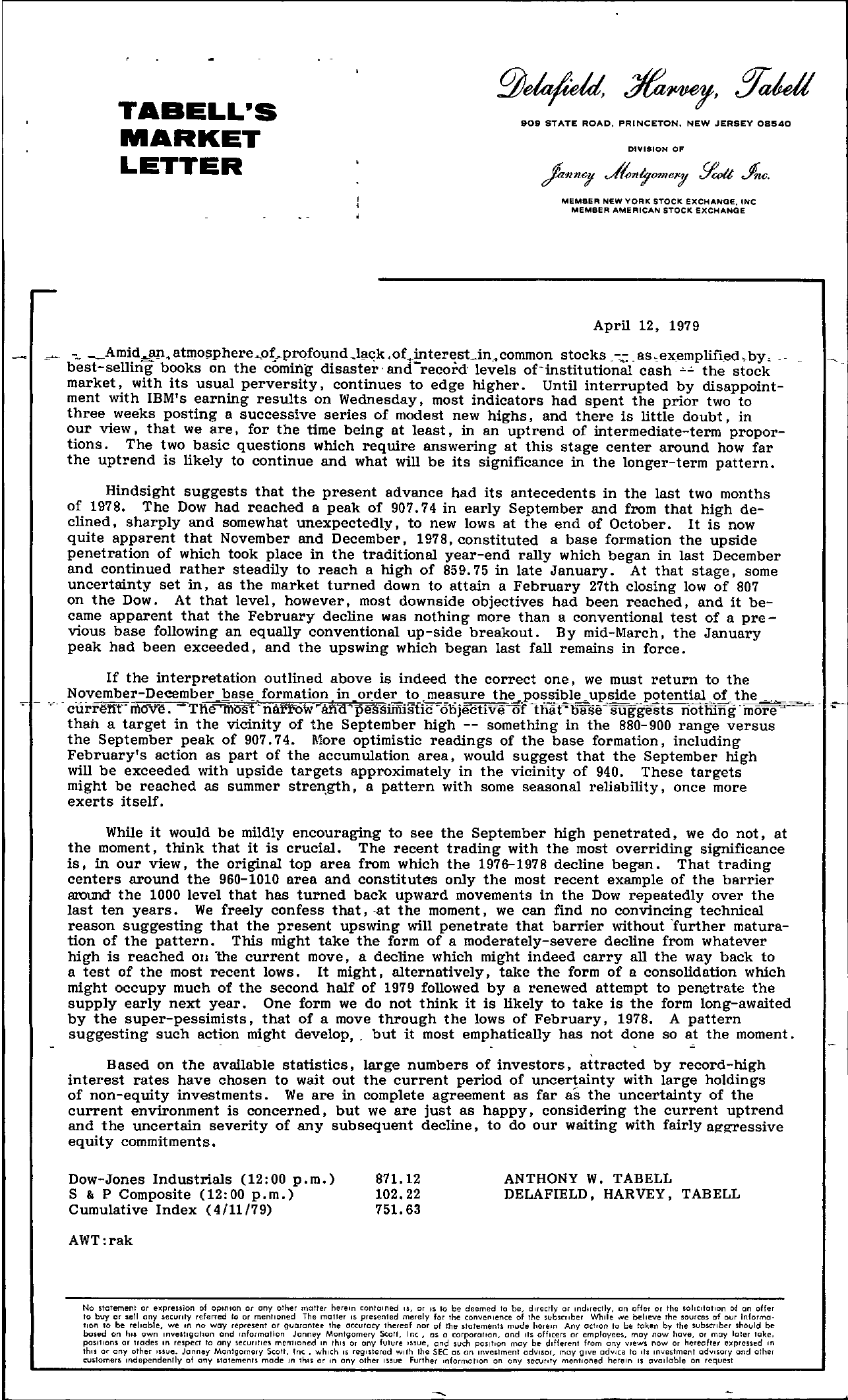 TABELL'S MARKET LETTER 909 STATE ROAD, PRINCETON. NEW JERSEY 08540 DIVISION OF MEMBER NEW VORK STOCK EXCHANGE, INC MEMBER AMERICAN STOCI( eXCHANGE April 12. 1979 '- profoundl!lk .0C!teresLin.common stocks ,-'; ,as ,exemplifi,ed,by 0 best-selling books on the coming disaster' and record' levels of-institutional cash the stock market. with its usual perversity. continues to edge higher. Until interrupted by disappointment with IBM's earning results on Wednesday. most indicators had spent the prior two to three weeks posting a successive series of modest new highs. and there is little doubt, in our view. that we are. for the time being at least. in an uptrend of intermediate-term proportions. The two basic questions which require answering at this stage center around how far the uptrend is likely to continue and what will be its significance in the longer-term pattern. HindSight suggests that the present advance had its antecedents in the last two months of 1978. The Dow had reached a peak of 907.74 in early September and from that high declined. sharply and somewhat unexpectedly. to new lows at the end of October. It is now quite apparent that November and December, 1978. constituted a base formation the upside penetration of which took place in the traditional year-end rally which began in last December and continued rather steadily to reach a high of 859.75 in late January. At that stage, some uncertainty set in. as the market turned down to attain a February 27th closing low of 807 on the Dow. At that level. however. most downside objectives had been reached, and it became apparent that the February decline was nothing more than a conventional test of a previous base following an equally conventional up-side breakout. By mid-March, the January peak had been exceeded, and the upswing which began last fall remains in force. If the interpretation outlined above is indeed the correct one, we must return to the November-December base formation in order to ,measure the possible upside potential of the ' current' move. The-most 'narrow andpes'srnlisfic 'ol'ijectiveCirtllat'1lase-suggests rioWng'more – ' than a target in the vicinity of the September high — something in the 880- 900 range versus the September peak of 907.74. More optimistic readings of the base formation, including February's action as part of the accumulation area, would suggest that the September high will be exceeded with upside targets approximately in the vicinity of 940. These targets might be reached as summer stren,gth, a pattern with some seasonal reliability, once more exerts itself. While it would be mildly encouraging to see the September high penetrated. we do not. at the moment, think that it is crucial. The recent trading with the most overriding significance is, in our view, the original top area from which the 1976-1978 decline began. That trading centers around the 960-1010 area and constitutes only the most recent example of the barrier around the 1000 level that has turned back upward movements in the Dow repeatedly over the last ten years. We freely confess that, -at the moment, we can find no convincing technical reason suggesting that the present upswing will penetrate that barrier without 'further maturation of the pattern. This might take the form of a moderately-severe decline from whatever high is reached 011 'the current move, a decline which might indeed carryall the way back to a test of the most recent lows. It might, alternatively, take the form of a consolidation which might occupy much of the second half of 1979 followed by a renewed attempt to penetrate the supply early next year. One form we do not think it is likely to take is the form long-awaited by the super-pessimists, that of a move through the lows of February, 1978. A pattern suggesting such action might develop but it most emphatically has not done so at the moment. Based on the available statistics, large numbers of investors. attracted by record-high interest rates have chosen to wait out the current period of uncertainty with large holdings of non-equity investments. We are in complete agreement as far as the uncertainty of the current environment is concerned, but we are just as happy, considering the current uptrend and the uncertain severity of any subsequent decline, to do our waiting with fairly ag-gressive equity commitments. Dow-Jones Industrials (1200 p.m.) S & P Composite (1200 p.m.) Cumulative Index (4/11/79) AWTrak 871.12 102.22 751. 63 ANTHONY W. TAB ELL DELAFIELD. HARVEY. TAB ELL No statement or expresslon of opinIOn or any other matter herein contolned IS, or IS to be deemed to be, directly Of indirectly, on offer or the soliCitation of on offer to buy or sell any security referred to or mentioned The moiler IS presented merely for the converlence of the subscrIber WhIle -He belIeve the sources of our Informa- t,on to be reliable, we In no way represent or guarantee the accuracy thereof nor of the statements mude hore, Any acllon to be laken by the subSCriber should be based on hIS own investIgation and information Janney Montgomery SCali, Inc, as a corporohon, and Its offICers or employees, moy now have, or moy laler lake, pOSItIOns or Hodes In respect to any mentIoned In Ihls or any future Issue, and such POSitIon may be dIfferent from any views now or hereafter expressed m thIS or any other Issue. Janney Montgomery Scotl, Inc, whIch IS reglstorcd Wllh the SEC as on Investment adVIsor, may gIve adVICe 10 lIs Investment adVIsory and othel customers mdependently of any statements mode In thiS or In any other luue Further ,nformat,on on any secunty mentIoned hereIn IS available on request