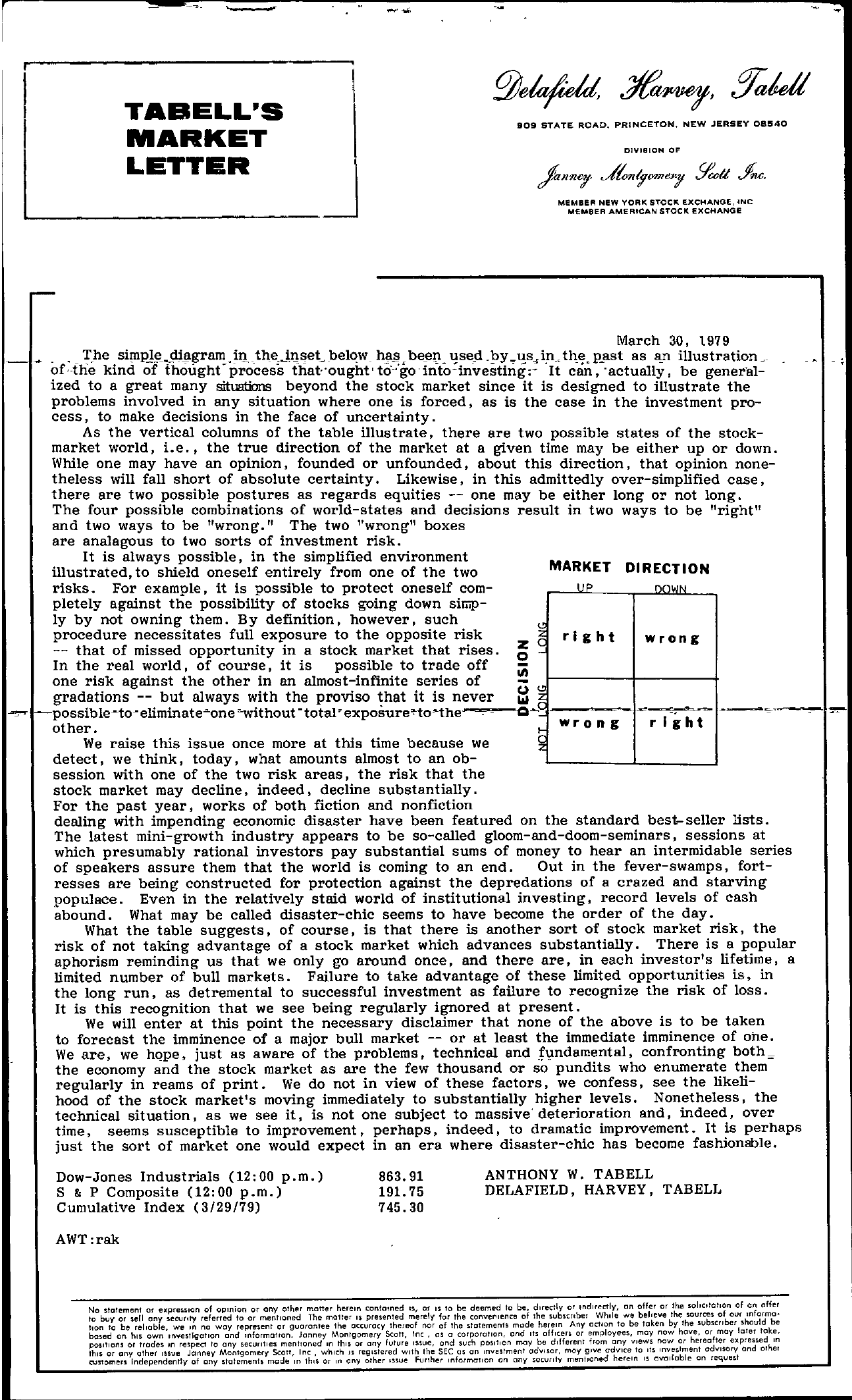 r r TABELL'S MARKET LETTER L-. 909 STATE ROAD. PRINCETON. NEW JERSEY 08!540 DIYIBION OF MEMBER New YORK STOCK EXCHANGE, INC MEMBER AMERICAN STOCK EXCHANGE March 30, 1979 . The . below h!ll'!. py,,!s.i.n. Rast as an f–the kmd of thought process that–ought' t6– go- into-investing;- It can, -actually, be gener-al- lzed to a great many situations beyond the stock market since it is designed to illustrate the problems involved in any situation where one is forced, as is the case in the investment pro- cess, to make decisions in the face of uncertsinty. As the vertical columns of the table illustrate, there are two possible states of the stock- market world, i. e., the true direction of the market at a given time may be either up or down. While one may have an opinion, founded or unfounded, about this direction, that opinion none- theless will fall short of absolute certainty. Likewise, in this admittedly over-simplified case, there are two possible postures as regards equities — one may be either long or not long. The four possible combinations of world-states and decisions result in two ways to be right and two ways to be wrong. The two wrong boxes are analagous to two sorts of investment risk. It is always possible, in the simplified environment illustrated, to shield oneself entirely from one of the two MARKET DIRECTION risks. For example, it is possible to protect oneself com- UP DOWN pletely agsinst the possibility of stocks going down simp- ly by not owning them. By definition, however, such procedure necessitates full exposure to the opposite risk — that of missed opportunity in a stock market that rises. rig h t wrong In the real world, of course, it is possible to trade off one risk agsinst the other in an almost-infinite series of III gradations — but always with the proviso that it is never without – total' other. We raise this issue once more at this time because we detect, we think, today, what amounts almost to an ob- session with one of the two risk areas, the risk that the stock market may decline, indeed, decline substantially. For the past year, works of both fiction and nonfiction dealing with impending economic disaster have been featured on the standard best- seller lists. The latest mini-growth industry appears to be so-called gloom-and-doom-seminars, sessions at which presumably rational investors pay substantial sums of money to hear an intermidable series of speakers assure them that the world is coming to an end. Out in the fever-swamps, fort- resses are being constructed for protection against the depredations of a crazed and starving populace. Even in the relatively staid world of institutional investing, record levels of cash abound. What may be called disaster-chic seems to have become the order of the day. What the table suggests, of course, is that there is another sort of stock market risk, the risk of not taking advantage of a stock market which advances substantially. There is a popular aphorism reminding us that we only go around once, and there are, in each investor's lifetime, a limited number of bull markets. Fsilure to take advantage of these limited opportunities is, in the long run, as detremental to successful investment as failure to recognize the risk of loss. It is this recognition that we see being regularly ignored at present. We will enter at this point the necessary disclaimer that none of the above is to be taken to forecast the imminence of a major bull market — or at least the immediate imminence of one. We are, we hope, just as aware of the problems, technical and .rl,lndamental, confronting both the economy and the stock market as are the few thousand or so pundits who enumerate them regularly in reams of print. We do not in view of these factors, we confess, see the likeli- hood of the stock market's moving immediately to substantially higher levels. Nonetheless, the technical situation, as we see it, is not one subject to massive- deterioration and, indeed, over time, seems susceptible to improvement, perhaps, indeed, to dramatic improvement. It is perhaps just the sort of market one would expect in an era where disaster-chic has become fashionable. Dow-Jones Industrials (12;00 p.m.) S & P Composite (12 00 p. m. ) Cumulative Index (3/29/79) 863.91 191. 75 745.30 ANTHONY W. TABELL DELAFIELD, HARVEY, TABELL AWT;rak ,- No stglemenl or expn!Ulon of opmion or Qny other matter herein contmned IS, or 1 10 be deemed to be, directly or Indirectly. an offer or the soliCitation of on offer to buy or sell ony secunly referred 10 or mentioned The moiler 1 presented merely for the converllena. of the subscrtber Wh,le we believe the sources of our mformo t,on to be reliable, we ,n no way represent or guarontee the occuracy thereof nor of the statements mude herem Any octlon to be token by the subscriber should be bosed on hiS own Investigation ond mforma1ron. Janney Montgomery Scott, Inc, as a corporation, and Its olf,cers or employees, moy now have, or may loter take, pOSitions or trades In respect to any seCUrities menltoned In thiS or any future Issue, and such pOSition may be dilferent from any views now or hereafter expressed In Ih,s or any other Issue Janney Montgomery Scott, tnc , which IS registered With Ihe SEC as on Invulment adVisor, may give adVice to lis Investment adVisory and othel customers Independently of ony statements mode In thiS or In any olher Issue Funher information on any secunty mentioned herem IS avolloble on request