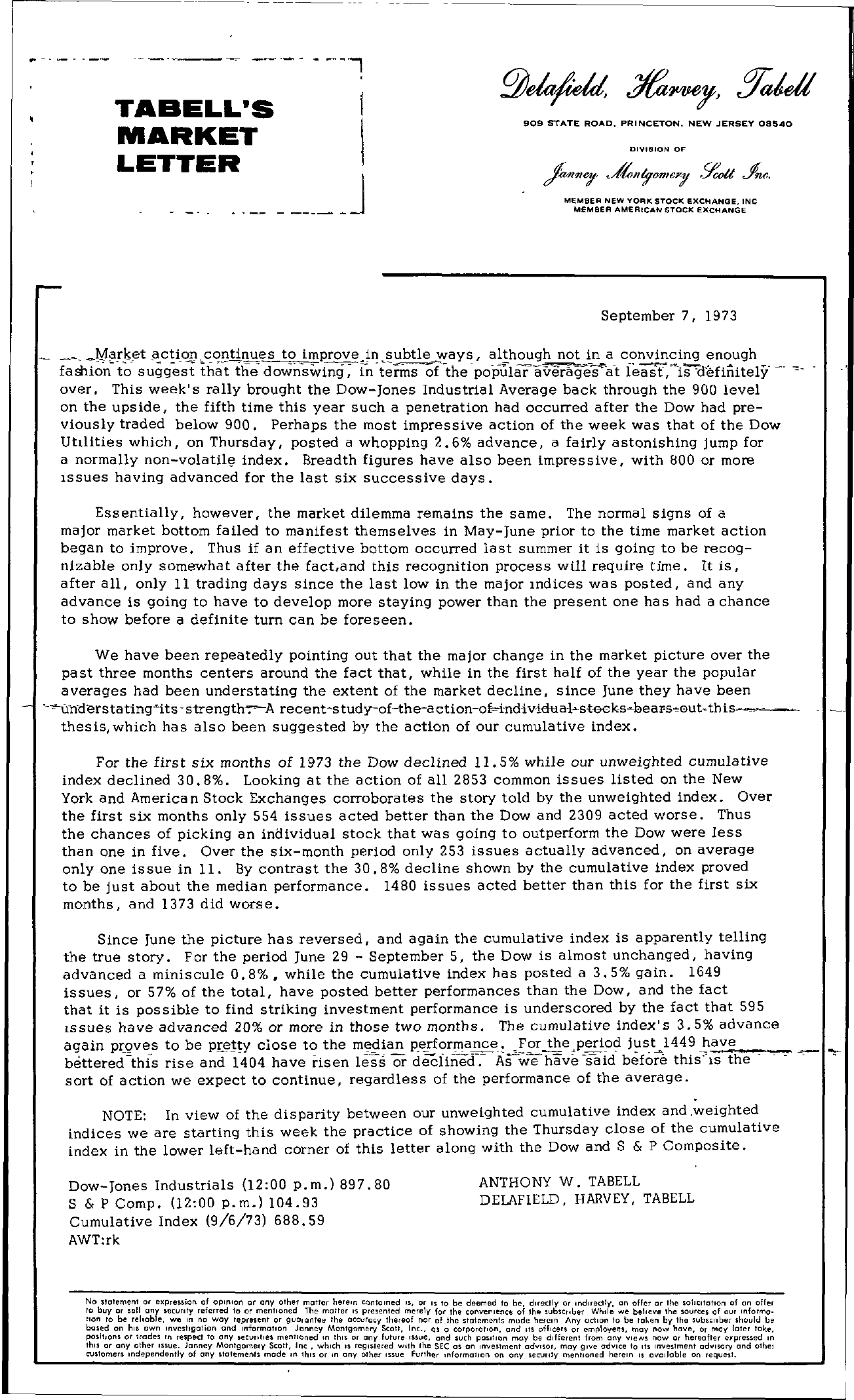 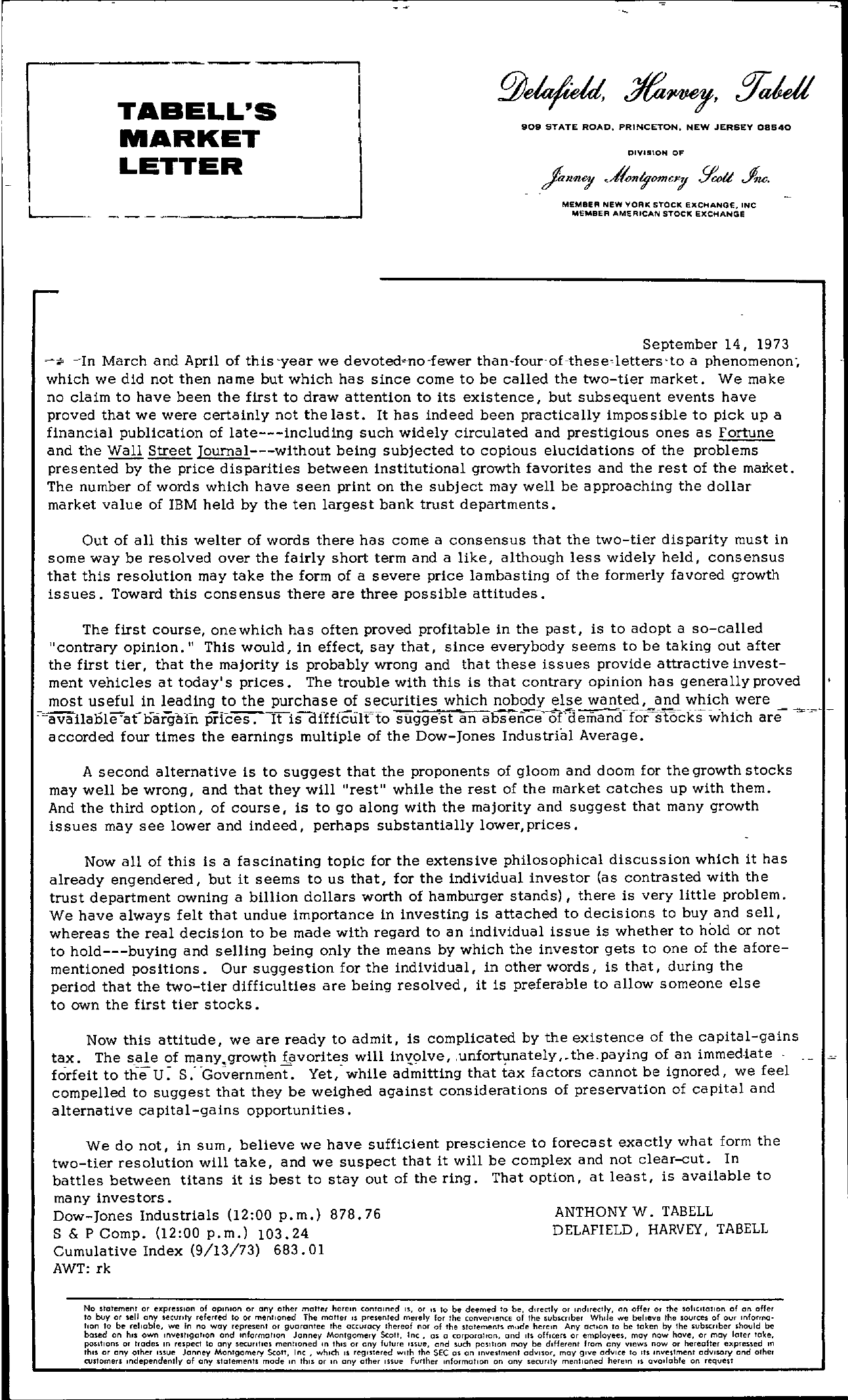 – ! TABELL'S , , MARKET LETTER – I — i 909 STATE ROAD, PRINCETON, NEW JERSEY 08540 DIVISION OF MEMBER New VORK STOCK EXCHANG, INC MEMBER AMERICAN STOCK eXCHANGE September 14, 1973 –In March and April of this 'year we devotedno-fewer than-four-of-these,letters -to a phenomenon; which we did not then name but which has since come to be called the two-tier market. We make no claim to have been the first to draw attention to its existence, but subsequent events have proved that we were certainly not the last. It has indeed been practically impossible to pick up a financial publication of late—including such widely circulated and prestigious ones as Fortune and the Wall Street Journal—without being subjected to copious elucidations of the problems presented by the price disparities between institutional growth favorites and the rest of the market. The number of words which have seen print on the subject may well be approaching the dollar market value of IBM held by the ten largest bank trust departments. Out of all this welter of words there has come a consensus that the two-tier disparity must in some way be resolved over the fairly short term and a like, although less widely held, consensus that this resolution may take the form of a severe price lambasting of the formerly favored growth issues. Toward this consensus there are three possible attitudes. The first course, one which has often proved profitable in the past, is to adopt a so-called contrary opinion. This would, in effect, say that, since everybody seems to be taking out after the first tier, that the majority is probably wrong and that these issues provide attractive investment vehicles at today's prices. The trouble with this is that contrary opinion has generally proved ' most useful in leading to the purchase of securities which nobody else wanted, and which were cavailaJ5le'afDa;galn Pi'lces–Itlsdfff1culno sugge-st an ansence–o(CiemancCforittocJ(swhich are- ' accorded four times the earnings multiple of the Dow-Jones Industrial Average. A second alternative is to suggest that the proponents of gloom and doom for the growth stocks may well be wrong, and that they will rest while the rest of the market catches up with them. And the third option, of course, is to go along with the majority and suggest that many growth issues may see lower and indeed, perhaps substantially lower,prices. Now all of this is a fascinating topic for the extensive philosophical discussion which it has already engendered, but it seems to us that, for the individual investor (as contrasted with the trust department owning a billion dollars worth of hamburger stands), there is very little problem. We have always felt that undue importance in investing is attached to decisions to buy and sell, whereas the real decision to be made with regard to an individual issue is whether to hold or not to hold—buying and selling being only the means by which the investor gets to one of the aforementioned positions. Our suggestion for the individual, in other words, is that, during the period that the two-tier difficulties are being resolved, it is preferable to allow someone else to own the first tier stocks. Now this attitude, we are ready to admit, is complicated by the existence of the capital-gains tax. The sale of many.growth lavorites will in,olve, ,unfort';lnately,.the,paying of an immed-iate forfeit to theU SGovernm'ent. Yet, while admitting that tax factors cannot be ignored, we feel compelled to suggest that they be weighed against considerations of preservation of capital and alternative capital-gains opportunities. We do not, in sum, believe we have sufficient prescience to forecast exactly what form the two-tier resolution will take, and we suspect that it will be complex and not clear-cut. In battles between titans it is best to stay out of the ring. That option, at least, is available to many investors. Dow-Jones Industrials (1200 p.m.) 878.76 S & P Compo (1200 p.m.) 103.24 ANTHONY W. TAB ELL DELAFIELD, HARVEY, TABELL Cumulative Index (9/13/73) 683.01 AWT rk No stalement or expreSSion of opInion or any other motler herem contolned IS, or IS to be deemed 10 be, dlrec1ly or indirectly, on offer or the 50lle.IOllon of on offer to buy or seU any secvrlty referred 10 or mentioned The mOiler IS presented merely for the conve((ence of the subscriber While oNe believe the sources of our Informa- hon to be reliable, we In no way represent or guarontee the accuracy thereof nor of the stotements mude herein Any aclion to be token by the subSCriber should be based on hiS own Investlgallon and Information Janney Montgomery Seoll. Inc, as a corporallon, and Its officers or employees, may now have, or may later take, poSitions or trades In respect to any securlhcs mentIOned In thiS or any future Issue, and such pOSition may be different from any views now or hereafter expressed In thIS or any other ISsue Janney Montgomery Scoff, Inc, which IS registered With the SEC as on Investment adVisor, may give adVice to lIs Investment adVISOry and othel customers Independently of any statements mode In thiS or In any other Issue Further InformatIOn an any seeurlly mentioned herein IS available on request