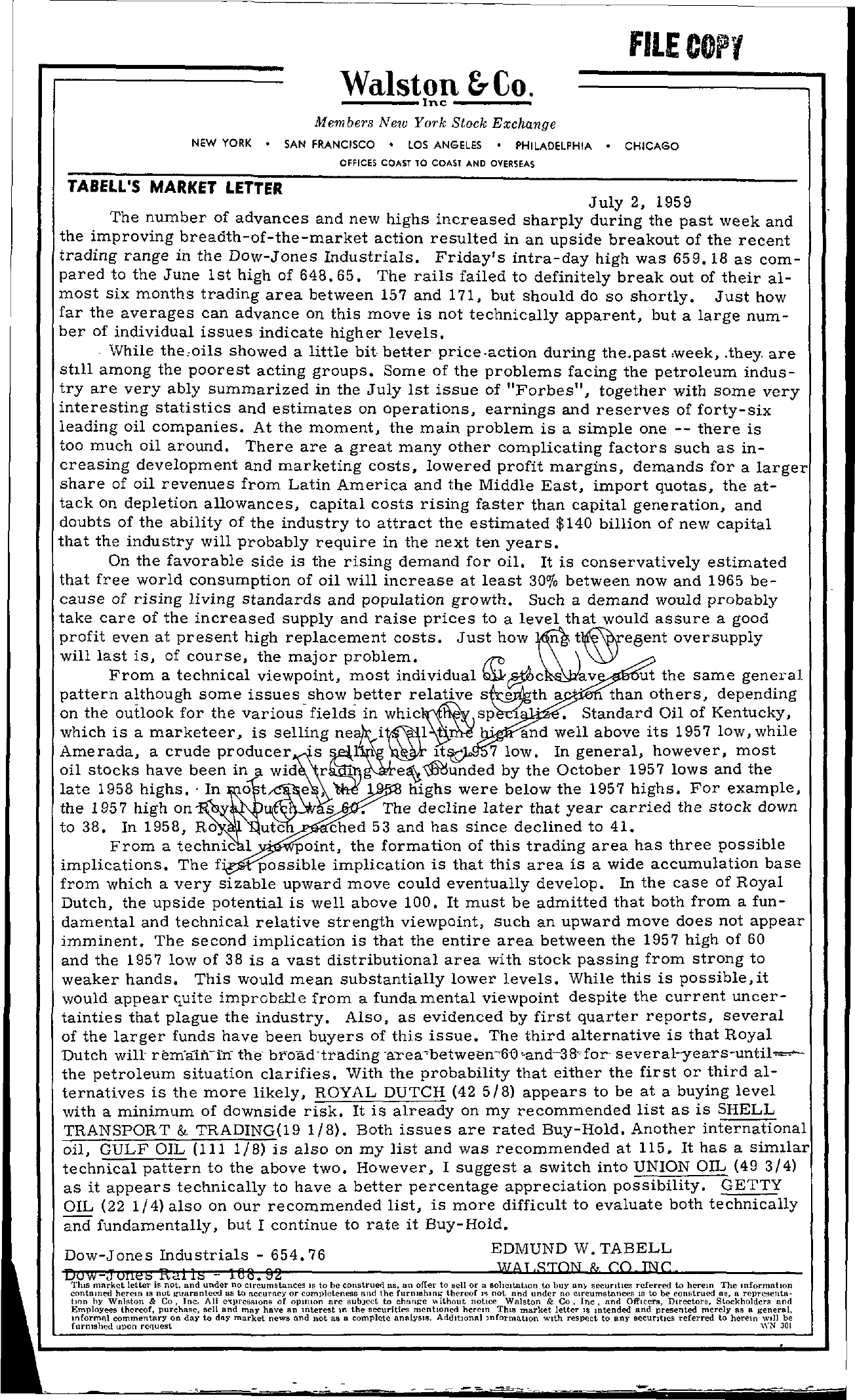 Walston &Co. FILE COP, Membe1's New York Stock Exchange NEW YORK SAN FRANCISCO LOS ANGELES PHILADELPHIA CHICAGO OFFICES COAST TO COAST AND OVERSEAS TABEll'S MARKET lETTER July 2, 1959 The number of advances and new highs increased sharply during the past week and the improving breadth-of-the-market action resulted in an upside breakout of the recent trading range in the Dow-Jones Industrials. Friday's intra-day high was 659.18 as com- pared to the June 1st high of 648.65. The rails failed to definitely break out of their al- most six months trading area between 157 and 171, but should do so shortly. Just how far the averages can advance on this move is not technically apparent, but a large num- ber of individual issues indicate higher levels. While the,oils showed a little bit bet-ter price,action during the. past ,week, .they. are shll among the poorest acting groups. Some of the problems facing the petroleum indus- try are very ably summarized in the July 1st issue of Forbes, together with some very interesting statistics and estimates on operations, earnings and reserves of forty-six leading oil companies. At the moment, the main problem is a simple one — there is too much oil around. There are a great many other complicating factors such as in- creasing development and marketing costs, lowered profit margins, demands for a larger share of oil revenues from Latin America and the Middle East, import quotas, the at- tack on depletion allOWances, capital costs rising faster than capital generation, and doubts of the ability of the industry to attract the estimated 140 billion of new capital that the industry will probably require in the next ten years. On the favorable side is the rising demand for oil. It is conservatively estimated that free world consumption of oil will increase at least 300/0 between now and 1965 be- cause of rising living standards and population growth. Such a demand would probably take care of the increased supply and raise prices to a level that would assure a good profit even at present high replacement costs. Just how will last is, of course, the major problem. flO W oversupply From a technical viewpoint, most individual av ut the same general pattern although some issues show better relative a' than others, depending on the outlook for the various fields in which is a marketeer, is selling SAmerada, a crude \sp\ci'.;J . . Standard Oil of Kentucky, and well above its 1957 low, while It 7 low. In general, however, most oil stocks have been in a wid r 1 by the October 1957 lows and the late 1958 highs. the 1957 high on 0 1 highs were below the 1957 highs. For example, s The decline later that year carried the stock down to 38. In 1958, Ro utc ched 53 and has since declined to 41. From a technic I . point, the formation of this trading area has three possible implications. The f possible implication is that this area is a wide accumulation base from which a very sizable upward move could eventually develop. In the case of Royal Dutch, the upside potential is well above 100. It must be admitted that both from a fun- damental and technical relative strength viewpoint, such an upward move does not appear imminent. The second implication is that the entire area between the 1957 high of 60 and the 1957 low of 38 is a vast distributional area with stock passing from strong to weaker hands. This would mean substantially lower levels. While this is possible,it would appear c,uite improbille from a funda mental viewpoint despite the current uncer- tainties that plague the industry. Also, as evidenced by first quarter reports, several of the larger funds have been buyers of this issue. The third alternative is that Royal Dutch win remaifJ.-fn- the- broadtrading the petroleum situation clarifies. With the probability that either the first or third al- ternatives is the more likely, ROYAL DUTCH (42 5/8) appears to be at a buying level with a minimum of downside risk. It is already on my recommended list as is SHELL TRANSPORT & TRADING(19 1/8). Both issues are rated Buy-Hold. Another international oil, GULF OIL (111 1/8) is also on my list and was recommended at 115. It has a simllar technical pattern to the above two. However, I suggest a switch into UNION OIL (49 3/4) as it appears technically to have a better percentage appreciation possibility. GETTY OIL (22 1/4) also on our recommended list, is more difficult to evaluate both technically and fundamentally, but I continue to rate it Buy-Hold. Dow-Jones Industrials – 654.76 LJuw-Jones Kalls – 166. 2 EDMUND W. TABELL WA T.STGN & co me ThiS market letter is not, and under no circumstances IS to be construeI'! as. an offer to sell or a BohcltntJon to buy an) securities referred to herein The mformatlOn contamed herem IS nut guaranteed as tt accuracy or completeness and the furnlshmg thereof not alld under no CIrcumstances IS to be construed n reprcsentu- tlfla hy & Co, lac, All e'lpreSBlOas of opInIOn are subJect to change \\-ithout notice Walston & Co, Inc, and Officers, Directors, Stockholders and Jomployees thereof, purchase, Informnl commentary on day sell to d an ny d may have market new a s n a m nd tere not st I as fl D the securities mentIOned herem ThiS market letter 1 mtended complete analYSIS. AddItIOnal mformntlOn With respect to any and presented merely as a general, secuntJcs referred to hereIn WIll be furmshed upon request \\,N 301