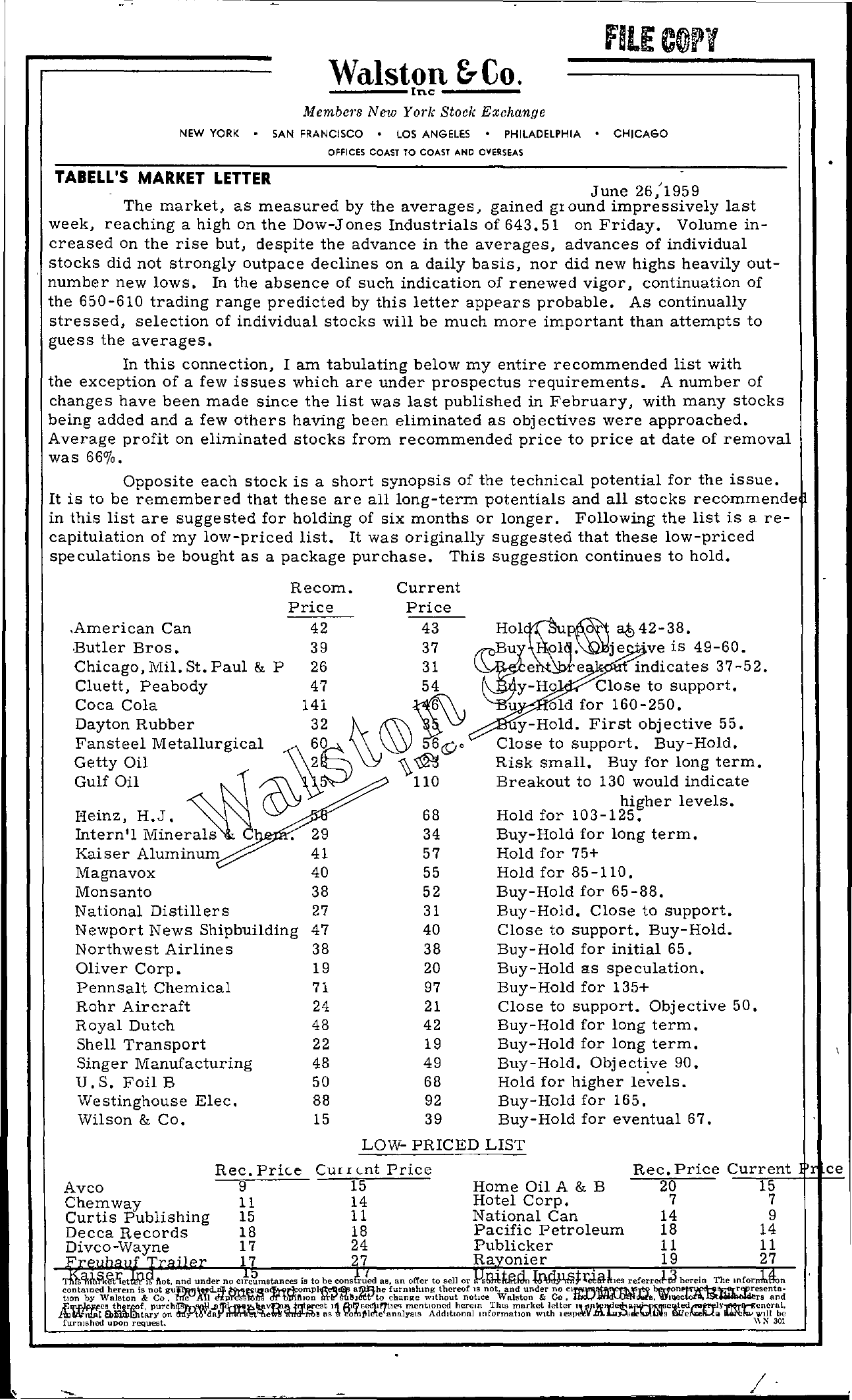 Walston &Co. Inc Members New York Stock Exchange NEW YORK SAN FRANCISCO LOS ANGELES PHILADELPHIA CHICAGO OFFICES COAST TO COAST AND OVERSEAS TABELL'S MARKET LETTER June 26 1959 The market, as measured by the averages, gained ground impressively last week, reaching a high on the Dow-J ones Industrials of 643.51 on Friday. Volume increased on the rise but, despite the advance in the averages, advances of individual stocks did not strongly outpace declines on a daily basis, nor did new highs heavily outnumber new lows. In the absence of such indication of renewed vigor, continuation of the 650-610 trading range predicted by this letter appears probable. As continually stressed, selection of individual stocks will be much more important than attempts to guess the averages. In this connection, I am tabulating below my entire recommended list with the exception of a few issues which are under prospectus requirements. A number of changes have been made since the list was last published in February, with many stocks being added and a few others having been eliminated as obj ectives were approached. Average profit on eliminated stocks from recommended price to price at date of removal was 66. Opposite each stock is a short synopsis of the technical potential for the issue. It is to be remembered that these are all long-term potentials and all stocks recommende in this list are suggested for holding of six months or longer. Following the list is a recapitulation of my low-priced list. It was originally suggested that these low-priced speculations be bought as a package purchase. This suggestion continues to hold. Recom. Price Current Price Kaiser Aluminum 41 Magnavox 40 Monsanto 38 National Distillers 27 Newport News Shipbuilding 47 Northwest Airlines 38 Oliver Corp. 19 Pennsalt Chemical 71 Rohr Aircraft 24 Royal Dutch 48 Shell Transport 22 Singer Manufacturing 48 U.S. FoilE 50 Westinghouse Elec. 88 Wilson & Co. 15 57 55 52 31 40 38 20 97 21 42 19 49 68 92 39 Rec. Price Avco 9 Chemway 11 Curtis Publishing 15 Decca Records 18 FDi vco- ,1- W,,,afyTnera j p r 17 17 CUI I cnt Price 15 14 11 18 24 27 Rec. Price Current Home Oil A & E Hotel Corp. 207 157 National Can Pacific Petroleum 14 18 9 14 Publicker 11 11 19 27 nnd under no contamed herem is not tlOn by Walston & Co. MeAll lmWrthlI ther.gof, EbJiiibl!J.tary on d1fYUi vdnt' furnished upon request. is to be con,sr.ied RS, an offer to sell furnlshmg thcrCQf 15 not, and under no df'b)fU!.lOn chanp;c Without nobce Walston & CO, trtt.l'csnt s111\\ QllS'se1lTleI mentiOned herem ThiS market letter 'loM1H1fte analYllls AdditiOnal mformatlon With lespe'tV rcferrJ.J herein The and 1W.l'b!lP..o will be \\ N 301 ce