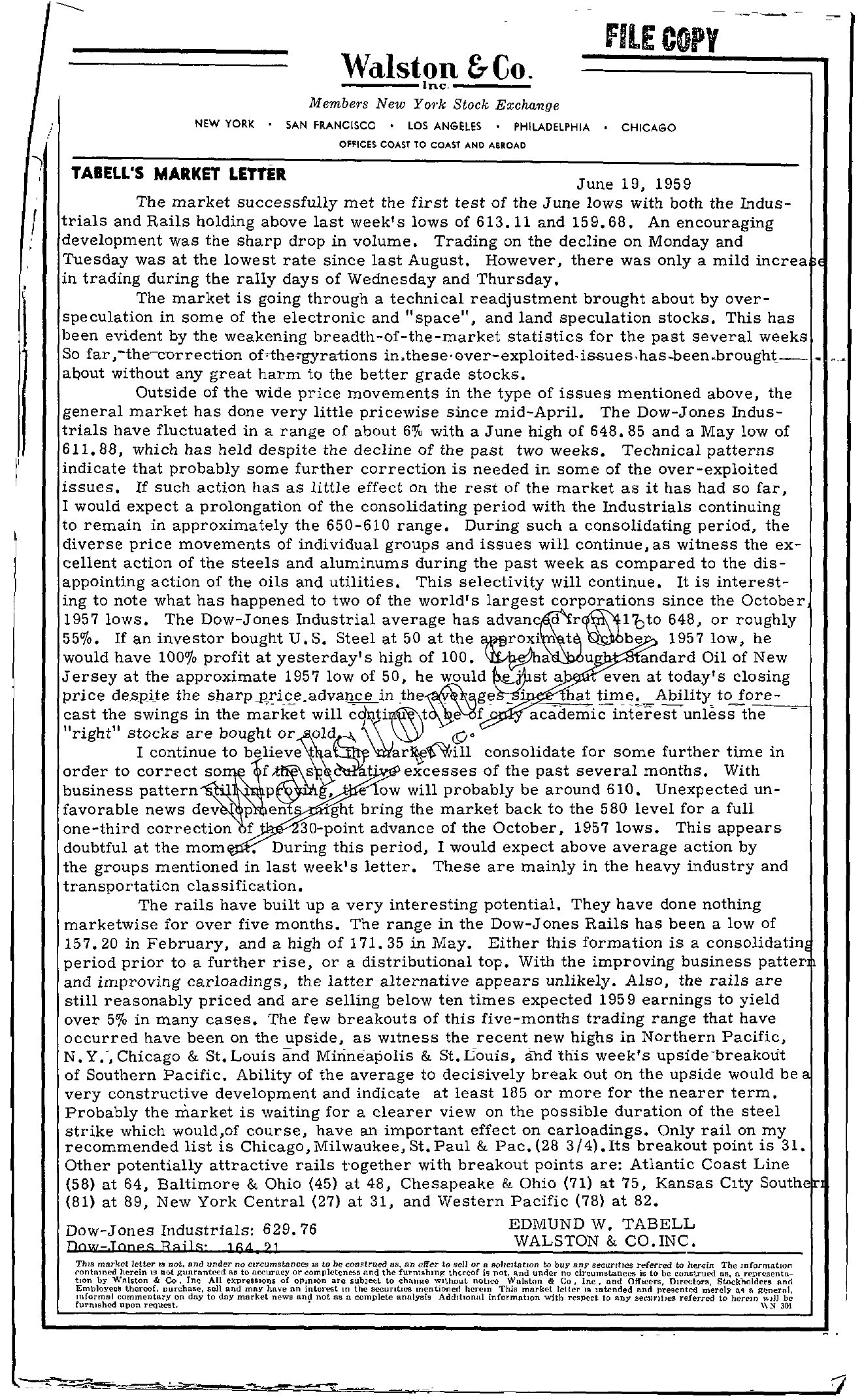 Walston &Co. Inc, Members New yo,'k Stock Exchange fiLE COpy – — NEW YORK SAN FRANCISCO LOS ANGELES PHILADELPHIA OFFICES COAST TO COAST AND ABROAD CHICAGO TABEll'S MARKET lETTER June 19, 1959 The market successfully met the first test of the June lows with both the lndus- f trials and Rails holding above last week's lows of 613. 11 and 159.68. An encouraging development was the sharp drop in volume. Trading on the decline on Monday and Tuesday was at the lowest rate since last August. However, there was only a mild increa le in trading during the rally days of Wednesday and Thursday. The market is going through a technical readjustment brought about by over- speculation in some of the electronic and space, and land speculation stocks. This has been evident by the weakening breadth-of-the-market statistics for the past several weeks So far, -the-cDrrection in,theseQver-exploited.issues,has-been.brought aoout without any great harm to the better grade stocks. Outside of the wide price movements in the type of issues mentioned above, the general market has done very little pricewise since mid-April. The Dow-Jones Indus- trials have fluctuated in a range of about 60/0 with a June high of 648.85 and a May low of 611.88, which has held despite the decline of the past two weeks. Technical patterns indicate that probably some further correction is needed in some of the over-exploited issues. If such action has as little effect on the rest of the market as it has had so far, I would expect a prolongation of the consolidating period with the Industrials continuing to remain in approximately the 650-610 range. During such a consolidating period, the diverse price movements of individual groups and issues will continue, as witness the ex- cellent action of the steels and aluminums during the past week as compared to the dis- appointing action of the oils and utilities. This selectivity will continue. It is interest- ing to note what has happened to two of the world's largest corporations since the October 1957 lows. The Dow-Jones Industrial average has 648, or roughly 55. If an investor bought U. S. Steel at 50 at the a&flroxi t 1957 low, he would have 1000/0 profit at yesterday's high of 100. Oil of New Jersey at the approximate 1957 low of 50, he would a even at today's closing price de.spiJe the sharpJlrice.advance in hat time. Ability to fore- cast the swings in the will right stocks are bought I continue to believe a – academicinterest unless W iJ)o consolidate for some further time in order to t' excesses of the past several months. With business pattern' p , ow will probably be around 610. Unexpected un- favorable news dev p en 'ght bring the market back to the 580 level for a full one-third correction f 30-point advance of the October, 1957 lows. This appears doubtful at the mom During this period, I would expect above average action by the groups mentioned in last week's letter. These are mainly in the heavy industry and transportation classification. The rails have built up a very interesting potential. They have done nothing marketwise for over five months. The range in the Dow-J ones Rails has been a low of 157.20 in February, and a high of 171.35 in May. Either this formation is a period prior to a further rise, or a distributional top. With the improving business patter and improving carloadings, the latter alternative appears unlikely. Also, the rails are still reasonably priced and are selling below ten times expected 1959 earnings to yield over 50/0 in many cases. The few breakouts of this five-months trading range that have occurred have been on the upside, as WItness the recent new highs in Northern Pacific, N. Y. -, Chicago & St. Louis and Mirineapolis & St. Louis, and this week's upsidebreakout of Southern Pacific. Ability of the average to decisively break out on the upside would be a very constructive development and indicate at least 185 or more for the nearer term. PrObably the market is waiting for a clearer view on the possible duration of the steel strike which would,of course, have an important effect on carloadings. Only rail on my recommended list is Chicago, Milwaukee, St. Paul & Pac. (28 3/4). Its breakout point is 31. Other potentially attractive rails together with breakout pOints are Atlantic Coast Line (58) at 64, Baltimore & Ohio (45) at 48, Chesapeake & Ohio (71) at 75, Kansas CIty Southelr, (81) at 89, New York Central (27) at 31, and Western Pacific (78) at 82. Dow-Jones Industrials 629.76 DoJ ,Tones Bajls 164 21 EDMUND W. TABELL WALSTON & CO. INC. Th!s market letter ,., not, tlnd under no circumstance, JS to be construed as, tin offer to sell or a SohcJUltlOn W buy any securIties referred to herein The mformatlOfi ('ontnmcd herein IS not as to nccurucy or completene5s and the fUl'mshmg thucor not, lnd under no circumstnnces is to be construed as, 0. reprQSento.- tlOn by Vo'alston & Co, Ine All expressIOns of OPITIIon arc subJet to change Without notlcl 'Valston & Co, Inc, and Ofilcern, Directors, Stockholdel's and Employees thcroof, purchase, sell and may hnve an interest In the SecUrItlCS mentioned her(!m This market Ictter IS mtended and N'cscnted merely nq a general, lIIformo.l commentary on day to day market news nnd not as a complete analysis AddItional information with respect to any secuntJes reierred to herem 'Mll be furnIshed upon r e q u e s t . ' \\ JOI