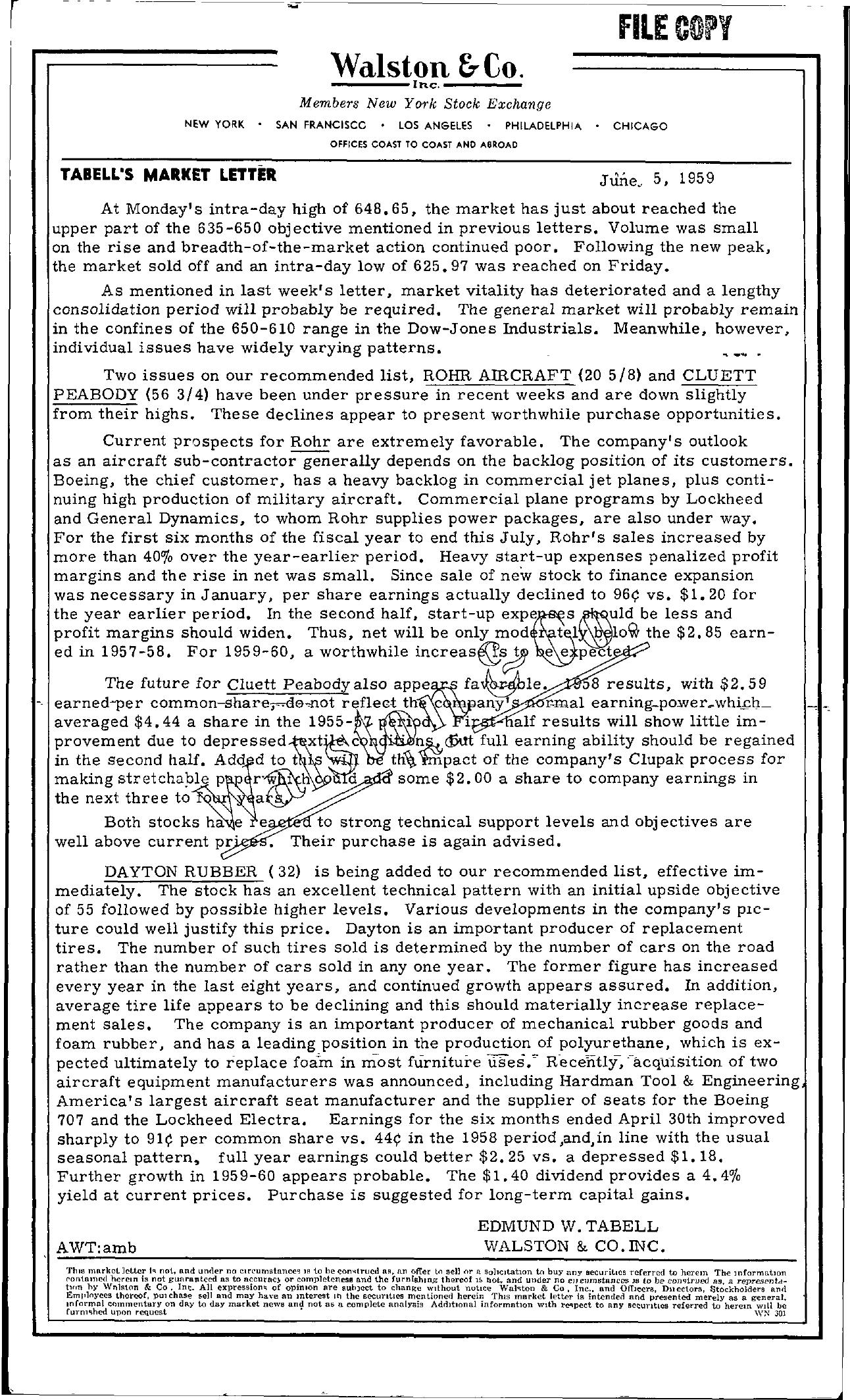 r FILE COpy Walston &Co. —–Inc, —-Members New York Stock Exchange NEW YORK SAN FRANCISCC LOS ANGELES 0 PHILADELPHIA 0 CHICAGO OFFICES COAST TO COAST AND ABROAD TABELL'S MARKET LETTER June., 5, 1959 At Monday's intra-day high of 648.65, the market has just about reached the upper part of the 635-650 objective mentioned in previous letters. Volume was small on the rise and breadth-of-the-market action continued poor. Following the new peak, the market sold off and an intra-day low of 625.97 was reached on Friday. As mentioned in last week's letter, market vitality has deteriorated and a lengthy consolidation period will probably be required. The general market will probably remain in the confines of the 650-610 range in the Dow-Jones Industrials. Meanwhile, however, individual issues have widely varying patterns. 0 Two issues on our recommended list, ROHR AllCRAFT (205/8) and CLUETT PEABODY (56 3/4) have been under pressure in recent weeks and are down slightly from their highs. These declines appear to present worthwhile purchase opportunities. Current prospects for Rohr are extremely favorable. The company's outlook as an aircraft sub-contractor generally depends on the backlog position of its customers. Boeing, the chief customer, has a heavy backlog in commercial jet planes, plus conti- nuing high production of military aircraft. Commercial plane programs by Lockheed and General Dynamics, to whom Rohr supplies power packages, are also under way. For the first six months of the fiscal year to end this July, ROhr's sales increased by more than 400/0 over the year-earlier period. Heavy start-up expenses penalized profit margins and the rise in net was small. Since sale of new stock to finance expansion was necessary in January, per share earnings actually declined to 96'; vs. 1. 20 for the year earlier period. In the second half, start-up be less and profit margins should widen. Thus, net will be only mod t the 2.85 earn- ed in 1957-58. For 1959-60, a worthwhile e e pect The future for Cluett Peabody also 8 results, with 2.59 earned-per common-share.de-not reflect th c – any' – J'.mal earningpowerwhi.f!ll averaged 4.44 a share in the i alf results will show little im- provement due to full earning ability should be regained in the second Add d to t making stretchaple p a0 lIDpact of the company's Clupak process for some 2.00 a share to company earnings in the next three to Both stocks ha e e to strong technical support levels and objectives are well above current pro Their purchase is again advised. DAYTON RUBBER (32) is being added to our recommended list, effective im- mediately. The stock has an excellent technical pattern with an initial upside objective of 55 followed by possible higher levels. Various developments in the company's PIC- ture could well justify this price. Dayton is an important producer of replacement tires. The number of such tires sold is determined by the number of cars on the road rather than the number of cars sold in anyone year. The former figure has increased every year in the last eight years, and continued growth appears assured. In addition, average tire life appears to be declining and this should materially increase replacement sales. The company is an important producer of mechanical rubber goods and foam rubber, and has a leading position in the production of polyurethane, which is expected ultimately to replace foam in most furniture u.ses.- Recently-, –acqUisition of two aircraft equipment manufacturers was announced, including Hardman Tool & Engineering America's largest aircraft seat manufacturer and the supplier of seats for the Boeing 707 and the Lockheed Electra. Earnings for the six months ended April 30th improved sharply to 91'; per common share vs. 44'; in the 1958 period ,and, in line with the usual seasonal pattern, full year earnings could better 2.25 vs. a depressed 1.18. Further growth in 1959-60 appears probable. The 1. 40 dividend provides a 4.40/0 yield at current prices. Purchase is suggested for long-term capital gains. AWTamb EDMUND W. TABELL WALSTON & CO. INC. ThIS market letter fO; not. and uno('t' no w18 1.0 be (!on'trucu aBo an offer lo sell or a sollCltabon buy nny securittes referred to herem The mformatlon r'ontnmcd hereIn is not gunrantced as to accurac. or completeness nnd the thereof 1& not. and under no ClI cllmstfinccs IS to be as a Fcpresentd. \\'nlI110n & Co. Int. All expression; of opinion are suh)cct to chanRe WIthout notice Wal;ton & Co. Inc and OffIccr;;, Dlicetors, and bmplnyecs thereof, sell and may have nn mteFC'St III the sC'CurltlC'S mentioned herein ThiS market letter is int'nderl and presented merely ns a general. lnrormai commentary on dRy to day market news and not as a complete nnnlysis Adrhbonal informatIon With lC'lpect to /lny secullhes referred to herem wIll be fUTIl1;hcd upon r e q u e s t ' \\'-;' 301