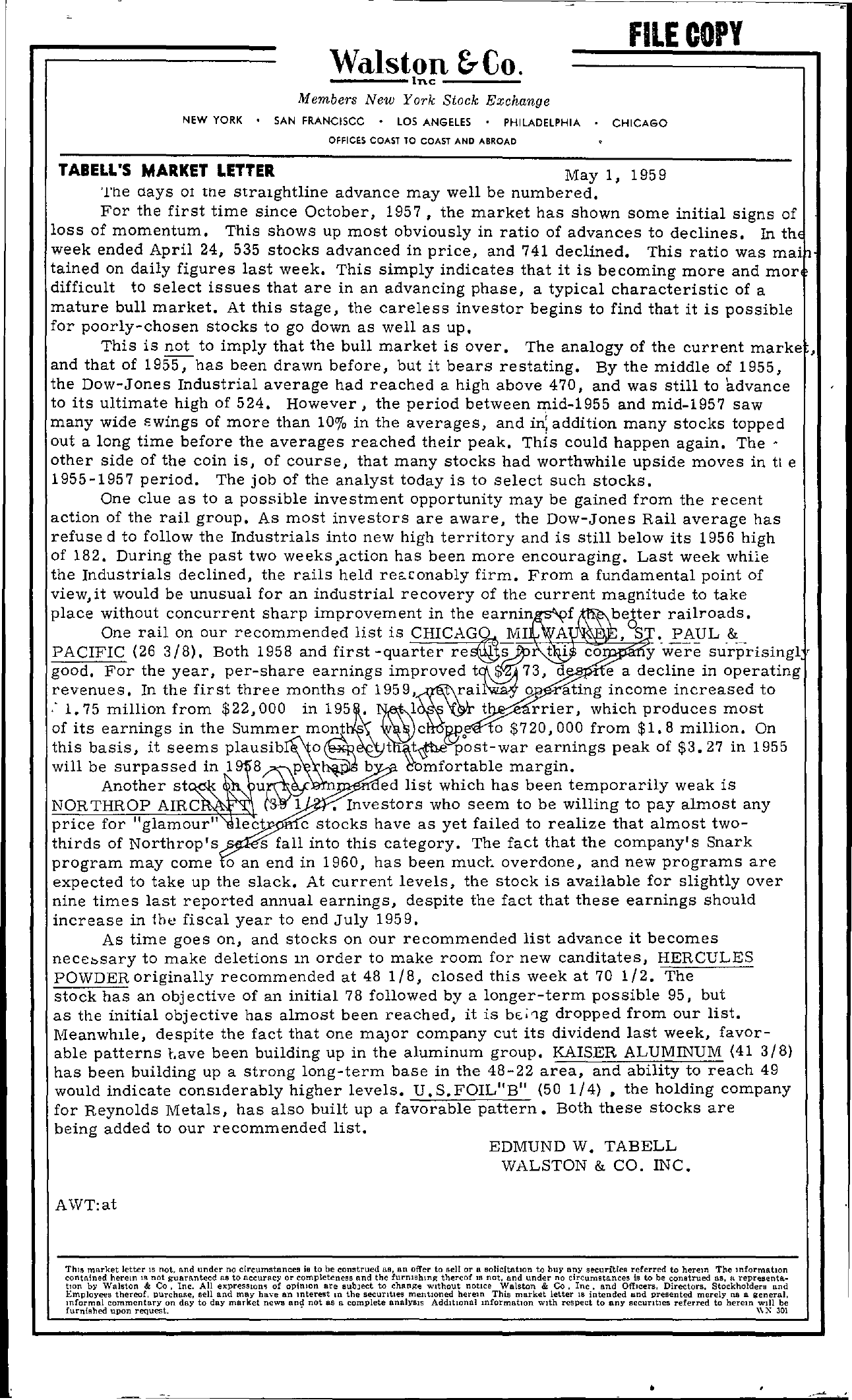 Walston &Co. —–Inc —…..;.- Members New York Stock Exchange NEW YORK SAN FRANCISCC LOS ANGELES PHILADELPHIA OFFICES COAST TO COAST AND ABROAD fiLE COpy CHICAGO TABELL'S MARKET LETTER May 1, 1959 The oays 01 we stralghtline advance may well be numbered. For the first time since October, 1957, the market has shown some initial signs of loss of momentum. This shows up most obviously in ratio of advances to declines. In th week ended April 24, 535 stocks advanced in price, and 741 declined. This ratio was mai tained on daily figures last week. This simply indicates that it is becoming more and mor difficult to select issues that are in an advancing phase, a typical characteristic of a mature bull market. At this stage, the careless investor begins to find that it is possible for poorly-chosen stocks to go down as well as up. This is not to imply that the bull market is over. The analogy of the current marke , and that of 1955, has been drawn before, but it bears restating. By the middle of 1955, the Dow-Jones Industrial average had reached a high above 470, and was still to advance to its ultimate high of 524. However, the period between mid-1955 and mid-1957 saw many wide swings of more than 100/0 in the averages, and in addition many stocks topped out a long time before the averages reached their peak. This could happen again. The' other side of the coin is, of course, that many stocks had worthwhile upside moves in tl e 1955-1957 period. The job of the analyst tOday is to select such stocks. One clue as to a possible investment opportunity may be gained from the recent action of the rail group. As most investors are aware, the Dow-Jones Rail average has refuse d to follow the Industrials into new high territory and is still below its 1956 high of 182. During the past two weeks ,action has been more encouraging. Last week while the Industrials declined, the rails held re2.conably firm. From a fundamental point of view, it would be unusual for an industrial recovery of the current magnitude to take place without concurrent sharp improvement in the f better railroads. One rail on our recommended list is CHICAG MI A ,OS. PAUL & PACIFIC (26 3/8). Both 1958 and first -quarter re t i co y 'were su'rp-rising1' gOOd. For the year, per-share earnings improved d e a decline in operating revenues. In the first three months of 0 ating income increased to 1.75 million from 22,000 in t rrier, which produces most of its earnings in the Summer mont 0 720,000 from 1. 8 million. On this basis, it seems will be surpassed in 1 t post-war earnings peak of 3.27 in 1955 b (lomfortable margin. Another st u ed list which has been temporarily weak is NOR THROP AIRC 1 . Investors who seem to be willing to pay almost any price for glamour lect c stocks have as yet failed to realize that almost two- thirds of Northrop's s fall into this category. The fact that the company's Snark program may come 0 an end in 1960, has been muer. overdone, and new programs are expected to take up the slack. At current levels, the stock is available for slightly over nine times last reported annual earnings, despite the fact that these earnings should increase in the fiscal year to end July 1959. As time goes on, and stocks on our recommended list advance it becomes necebsary to make deletions In order to make room for new canditates, HERCULES POWDER originally recommended at 481/8, closed this week at 70 1/2. The stock has an obj ective of an initial 78 followed by a longer-term possible 95, but as the initial objective has almost been reaChed, it is bEO;'lg dropped from our list. MeanwhIle, despite the fact that one maJor company cut its dividend last week, favor- able patterns Lave been building up in the aluminum group. KAISER ALUMINUM (41 3/8) has been building up a strong long-term base in the 48-22 area, and ability to reach 49 would indicate conSIderably higher levels. U. S. FOILB (50 1/4) the holding company for Reynolds Metals, has also built up a favorable pattern. Both these stocks are being added to our recommended list. EDMUND W. TABELL WALSTON & CO. INC. AWTat ThiS market letter 15 not. and under no circumstances ia to be construed (lB, an offer to Bell or a solicitatJon to buy any seeuritiea referred to herem The mformatlon contained hereln IS not guarnntced as to Ilccuracy or completeness and the furnlshmg thereof IS not. llnd under no circumstances is to be construed 8S, u representa- han by 'Walston & Co, Inc. All expresslOno; of opimon are subJect to change Without notice Walston & Co, Inc. and Officers, Directors, Stockholders Ilnd Employees thereof, purchaM, sell and may have an mterest In the securities mentioned herem This market letter 18 intended and presented merely ns a general, mformal commentary on day to day market neWli and not as a complete analysIs AdditIOnal mformatlOn WIth respect to any securities referred to herem Will be furnished. upon r e q u e s t . ' \\1;' 301