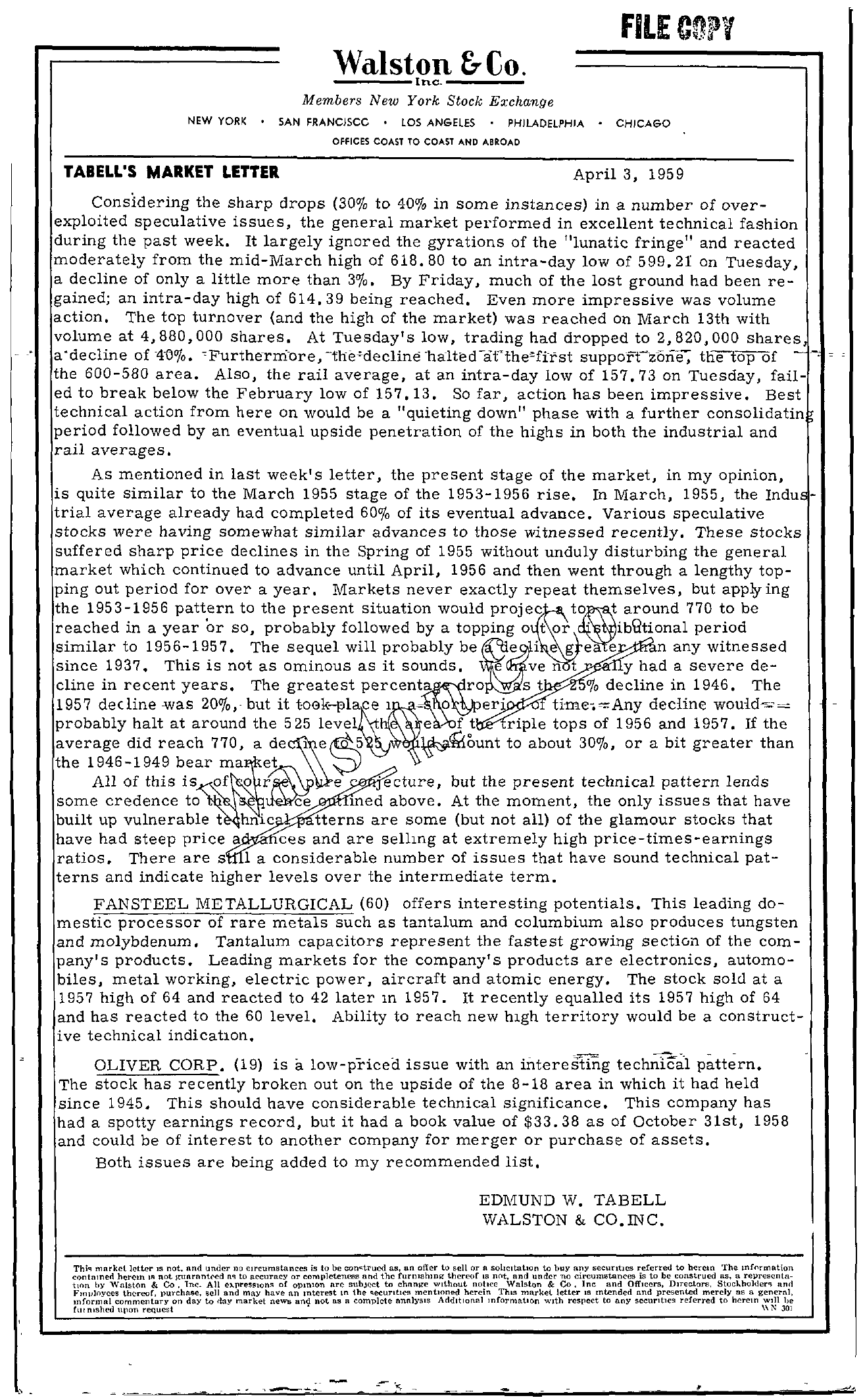 Walston &Co. —–Inc —– Members New York Stock Exchange FILE NEW YORK ' SAN FRANCISCC ' LOS ANGElES ' PHILADElPHIA ' CHICAGO OFFICES COAST TO COAST AND ABROAD TABEll'S MARKET lETTER April 3, 1959 Considering the sharp drops (30 to 40 in some instances) in a number of over- exploited speculative issues, the general market performed in excellent technical fashion during the past week. It largely ignored the gyrations of the lunatic fringe and reacted moderately from the mid-March high of 618.80 to an intra-day low of 599,21 on Tuesday, a decline of only a little more than 3. By Friday, much of the lost ground had been re- gained; an intra-day high of 614.39 being reached. Even more impressive was volume action. The top turnover (and the high of the market) was reached on March 13th with volume at 4,880,000 shares. At Tuesday's low, trading had dropped to 2,820,000 shares -a'decline of 40. cFurtheTrribre, halted-arthe'fitst supportzone- the top of the 600-580 area. Also, the rail average, at an intra-day low of 157.73 on Tuesday, fail- ed to break below the February low of 157.13. So far, action has been impressive. Best technical action from here on would be a quieting down phase with a further consolidatin period followed by an eventual upside penetration of the highs in both the industrial and rail averages. As mentioned in last week's letter, the present stage of the market, in my opinion, is quite similar to the March 1955 stage of the 1953-1956 rise. In March, 1955, the Indu – trial average already had completed 60 of its eventual advance. Various speculative stocks were having somewhat similar advances to those witnessed recently. These stocks suffered sharp price declines in the Spring of 1955 without unduly disturbing the general market which continued to advance until April, 1956 and then went through a lengthy top- ping out period for over a year. Markets never exactly repeat themselves, but applying the 1953-1956 patt,ern to the present situation would around 770 to be reached in a year or so, probably followed by a topping 0 t or ib't1tional period similar to 1956-1957. The sequel will probably e g ea e n any witnessed since 1937. This is not as ominous as it sounds. e ve n t y had a severe de- cline in recent years. The greatest s t decline in 1946. The 1957 decline -was 20, but it probably halt at around the 525 level a er time-.-.-Any decline wou-ld eft riple tops of 1956 and 1957. If the average did reach 770, a to about 30, or a bit greater than the 1946-1949 bear rna et All of this is of a e ecture, but the present technical pattern lends some credence to med above. At the moment, the only issues that have built up vulnerable t hn c tterns are some (but not all) of the glamour stocks that have had steep price a ces and are sellmg at extremely high price-tirnes-earnings ratios. There are s 1 a considerable number of issues that have sound technical pat- terns and indicate higher levels over the intermediate term. FANSTEEL METALLURGICAL (60) offers interesting potentials. This leading domestic processor of rare metals such as tantalum and columbium also produces tungsten and molybdenum. Tantalum capacitors represent the fastest growing section of the company's products. Leading markets for the company's products are electronics, automobiles, metal working, electric power, aircraft and atomic energy. The stock sold at a 1957 high of 64 and reacted to 42 later m 1957. It recently equalled its 1957 high of 64 and has reacted to the 60 level. Ability to reach new h1gh territory would be a constructive technical indicatlon. aOLIVER CORP. (19) is low-priced issue with an in- teresting technical p-atte- rn. The stock has recently broken out on the upside of the 8-18 area in which it had held since 1945. This should have considerable technical significance. This company has had a spotty earnings record, but it had a book value of 33.38 as of October 31st, 1958 and could be of interest to another company for merger or purchase of assets. Both issues are being added to my recommended list. EDMUND W. TABELL WALSTON & CO. INC. mnrkellctter 15 not, nnd under no cIrcumstances is to be contl'ucd as, un offer to sell or n soitcltahon to buy any securities referred to herem The mformation con till ned herem IR not gnnrllnt('ed to accuracy or compictenl!!!s and the furmshlnj;! thereof IS not, and under no circumst.&nees is to bc construed as, a representa- tion hy '''alston & Co, Inc. All e).preSSlOns or OpmlOn arc subJQct to chnnge Without notIce Walston & Co, Inc and Officers, Dlrectors, Stockholder'! and Fmpjoyecs thereof, purchase, sell and may have an mtcrest m the ;ecUTltJes mentIOned herein ThiS markel Jetter IS mtended and presented merely as II general, mformal commentary on day to clay market news and not as a complete analYSIS AdditIOnal mformatJon nth respect to any SeCUTltlcs referred to herem WIll be fUI nlshed tlllOn r e q u e s t ' \\ N 30 . – – -, ……….