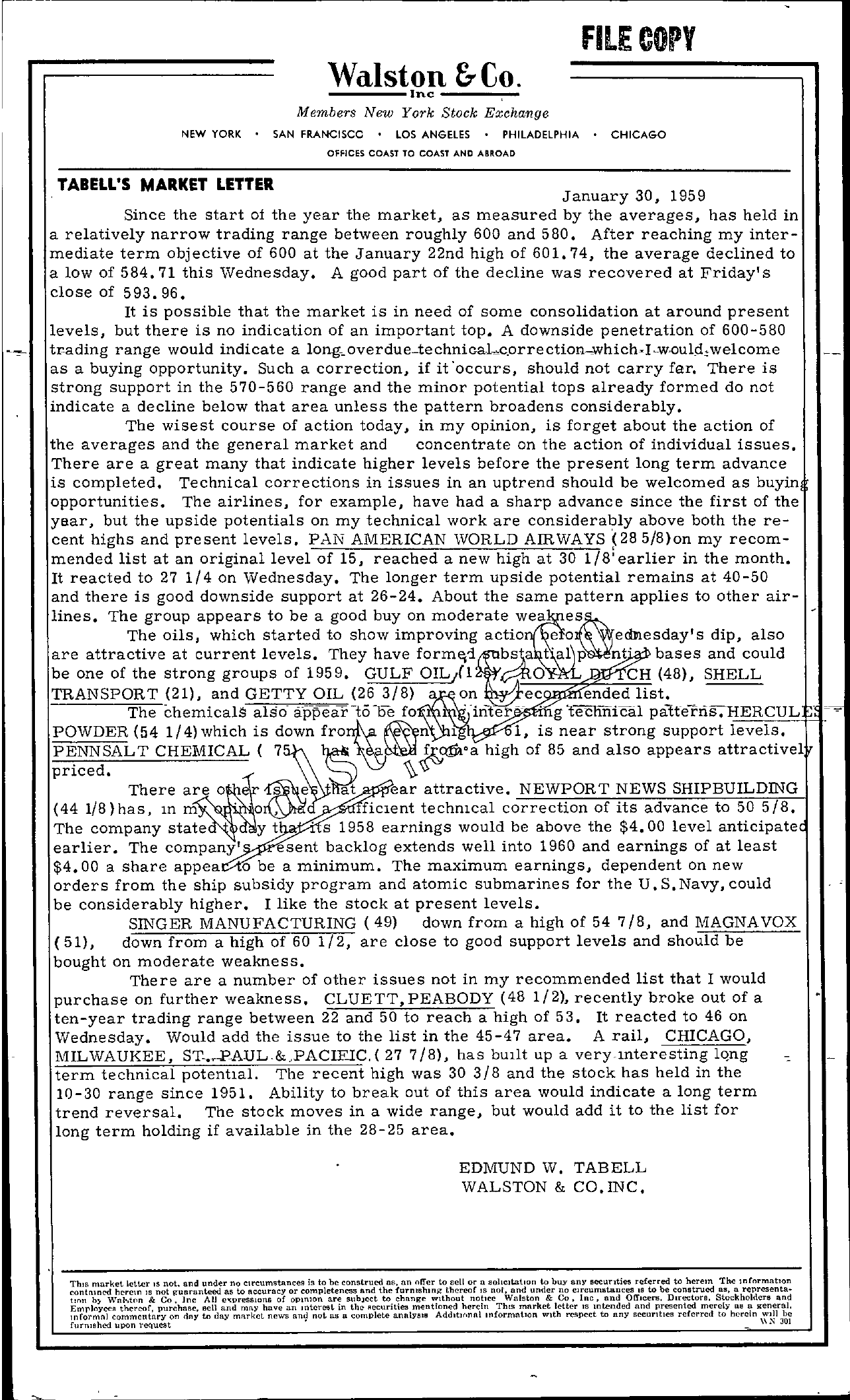 FILE COpy Walston &Co. Members New York Stock Exchange NEW YORK SAN FRANCISCO LOS ANGELES PHILADELPHIA CHICAGO OffiCES COAST TO COAST AND ABROAD TABELL'S MARKET LETTER January 30, 1959 Since the start of the year the market, as measured by the averages, has held in a relatively narrow trading range between roughly 600 and 580. After reaching my inter- mediate term objective of 600 at the January 22nd high of 601. 74, the average declined to a low of 584.71 this Wednesday. A good part of the decline was recovered at Friday's close of 593.96. It is possible that the market is in need of some consolidation at around present levels, but there is no indication of an important top. A downside penetration of 600-580 tl'ading range would indicate a long as a buying opportunity. Such a correction, if it 'occurs, should not carry fer. There is strong support in the 570-560 range and the minor potential tops already formed do not indicate a decline below that area unless the pattern broadens considerably. The wise st course of action today, in my opinion, is forget about the action of the averages and the general market and concentrate on the action of individual issues. There are a great many that indicate higher levels before the present long term advance is completed. Technical corrections in issues in an uptrend should be welcomed as buyin opportunities. The airlines, for example, have had a sharp advance since the first of the year, but the upside potentials on my technical work are considerably above both the re- cent highs and present levels. PAN AMERICAN WORLD AIRWAYS (28 5/8)on my recom- mended list at an original level of 15, reached a new high at 30 1/8earlier in the month. It reacted to 27 1/4 on Wednesday. The longer term upside potential remains at 40-50 and there is good downside support at 26-24. About the same pattern applies to other air- lines. The group appears to be a good buy on moderate wea The oils, which started to show improving actio e 0 ecbJ.esday's dip, also are attractive at current levels. They have a t'al p nt' bases and could be one of the strong groups of 1959. GULF OILl1 CH (48), SHELL TRANSPORT (21), and GETTY OIL (26 3/8) a on ec ended list. The chemicals also appear tii-De fo I , gte-clinical palterrl6,HERCUL POWDER (54 1/4)which is down I 1, is near strong support levels. PENNSALT CHEMICAL priced. '\. '-Y high of 85 and also appears attractivel There 0 (44 1/8)has, In m '0rQ)t t at ear attractive. NEWPORT NEWS SHIPBUILDING ficlent techmcal correction of its advance to 50 5/8. The company state y t 's 1958 earnings would be above the 4.00 level anticipate earlier. The company' esent backlog extends well into 1960 and earnings of at least 4.00 a share appea 0 be a minimum. The maximum earnings, dependent on new orders from the ship subsidy program and atomic submarines for the U. S. Navy, could be considerably higher. I like the stock at present levels. SINGER MANUFACTURING (49) down from a high of 54 7/8, and MAGNAVOX (51), down from a high of 60 1/2, are close to good support levels and should be bought on moderate weakness. There are a number of other issues not in my recommended list that I would purchase on further weakness. CLUETT,PEABODY (48 1/2), recently broke out of a ten-year trading range between 22 and 50 to reach a high of 53. It reacted to 46 on Wednesday. Would add the issue to the list in the 45-47 area. A rail, CHICAGO, MILWAUKEE, ST-.,-P-AUL-&rPACIF.lC,( 277/8), has bUIlt up a verYInteresting lQng term technical potentral. The recent high was 30 3/8 and the stock has held in the 10-30 range since 1951. Ability to break out of this area would indicate a long term trend reversal. The stock moves in a wide range, but would add it to the list for long term holding if available in the 28-25 area. EDMUND W. TAB ELL WALSTON & CO. INC, ThiS market letter IS not. and under no Circumstances is to be construed as, an offer to sell or n soliCitatIOn to buy any s(!Cunties referred to herem The Information contained herem IS not guaranteed as to accuracy or completeness and the furnlShlllJl!' therC!'O( IS not, and under no CIrcumstances 19 to be construed as, n Teprcsenta tlflll b li\'nJo.tnn & Co, Inc All e'lpresslOns of opllllon are subJect to change Without nobce Walston & Co, Inc, and OfficeI'!!, Directors, Stockholders and Employccs thereof, purchase, sell and may have an mterest in the lIecurities mentioned herein ThIS market letter IS Intended and presented merely as a general, Informal commentary on day to day market news and not us a complete analYSIS AddltJ(lnnl information With respect to any seCUrities referred to herein Will be furlllshed upon r e q , u e s t ' \\N 301