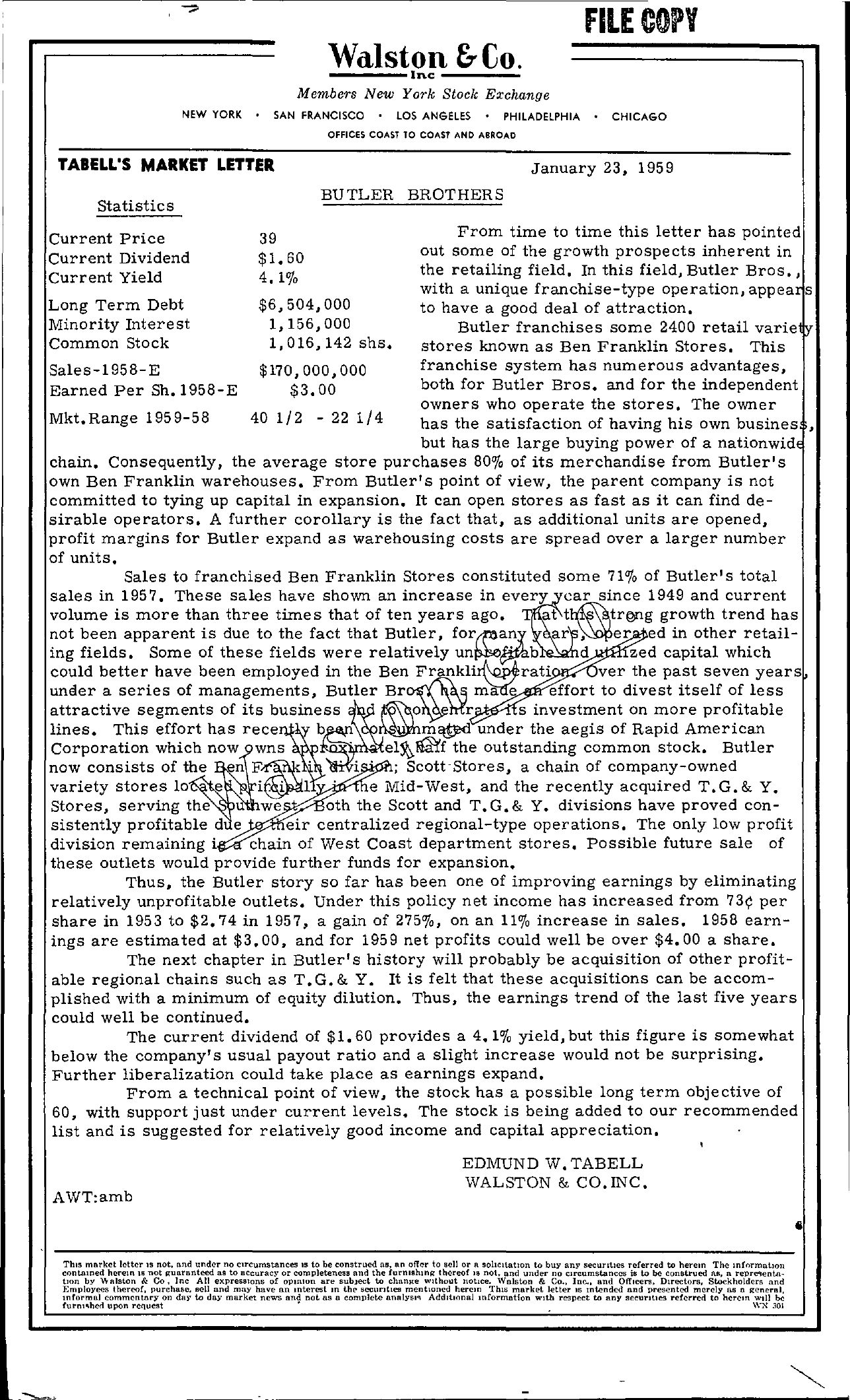 NEW YORK FILE COpy Walston &Co. Inc Members New York Stock Exchange SAN FRANCISCO LOS ANGELES PHILADELPHIA CHICAGO OFFICES COAST TO COAST AND ABROAD TABELL'S MARKET LETTER January 23, 1959 Statistics BUTLER BROTHERS Current Price Current Dividend Current Yield Long Term Debt Minority Interest Common Stock 39 1. 60 4.10/0 6,504,000 1,156,000 1,016,142 shs, From time to time this letter has pointed out some of the growth prospects inherent in the retailing field. In this field, Butler Bros., with a unique franchise-type operation, appear s to have a good deal of attraction. Butler franchises some 2400 retail varie IY stores known as Ben Franklin Stores. This Sales-1958-E 170,000,000 Earned Per Sh, 1958 – E 3.00 Mkt. Range 1959-58 40 1/2 – 22 1/4 franchise system has numerous advantages, both for Butler Bros. and for the independent owners who operate the stores. The owner has the satisfaction of having his own busines , but has the large buying power of a nationwid chain. Consequently, the average store purchases 800/0 of its merchandise from Butler's own Ben Franklin warehouses, From Butler's pOint of view, the parent company is not committed to tying up capital in expansion. It can open stores as fast as it can find de- sirable operators, A further corollary is the fact that, as additional units are opened, profit margins for Butler expand as warehousing costs are spread over a larger number of units. Sales to franchised Ben Franklin Stores constituted some 710/0 of Butler's total sales in 1957. These sales have shown an increase in since 1949 and current volume is more than three times that of ten years ago. 'E at growth trend has not been apparent is due to the fact that Butler, ed in other retail- ing fields. Some of these fields were relatively d zed capital which could better have been employed in the Ben FrankliJ\0'4rati 'uver the past seven years unser a series of managements, Butler effort to divest itself of less attractive segments of its s investment on more profitable lines, This effort has Corporation which now 9wns . the aegis of Rapid American the outstanding common stock. Butler now consists of the . i ; Scott-Stores, a chain of company-owned variety stores . e Mid-West, and the recently acquired T.G.& Y. Stores, serving the 1Ioth the Scott and T. G. & Y. divisions have proved con- sistently profitable d e eir centralized regional-type operations. The only low profit division remaining i chain of West Coast department stores. Possible future sale of these outlets would provide further funds for expansion. Thus, the Butler story so far has been one of improving earnings by eliminating relatively unprofitable outlets. Under this policy net income has increased from 739 per share in 1953 to 2.74 in 1957, a gain of 2750/0, on an 110/0 increase in sales. 1958 earn- ings are estimated at 3.00, and for 1959 net profits could well be over 4.00 a share. The next chapter in Butler's history will probably be acquisition of other profit- able regional chains such as T.G.& Y. It is felt that these acquisitions can be accom- plished with a minimum of equity dilution. Thus, the earnings trend of the last five years could well be continued. The current dividend of 1. 60 provides a 4.10/0 yield, but this figure is somewhat below the company's usual payout ratio and a slight increase would not be surprising. Further liberalization could take place as earnings expand. From a technical pOint of view, the stock has a possible long term objective of 60, with support just under current levels. The stock is being added to our recommended list and is suggested for relatively good income and capital appreciation, AWTamb EDMUND W. TABELL WALSTON & CO. INC. ThiS market letter IS not. and under no Circumstances IS to be construed UB, an ofter to sell or n soliCitation to buy any secUritieS referred to herem The mformatlOn conltuned herein IS not Jlulll'anteed as to uccurac)' or completencss and the furnishing thereof IS not. and under no Circumstances is to be construed nfl, n reprC'Jenta. tlOn by ,,alston &. Co, Inc All expressions of opinIOn are subject to chnnJe Without notice. 'Valston & Co., Inc., and Officers, Directors, Stockholdcrs and Informal thereof, purchase, commentary on da)' tsoeldl anyndmmarnkyethnaevWe'Sananmd tneroetsat sma the SCCllrJtlC!l complete mentioned herem ThiS market letter IS Intended AddltlOnnl mformation With respect to any and presented merely a5 a general, securities referred to herem will be furnl'lhed upon r e ( l u e s t ' . WN 301