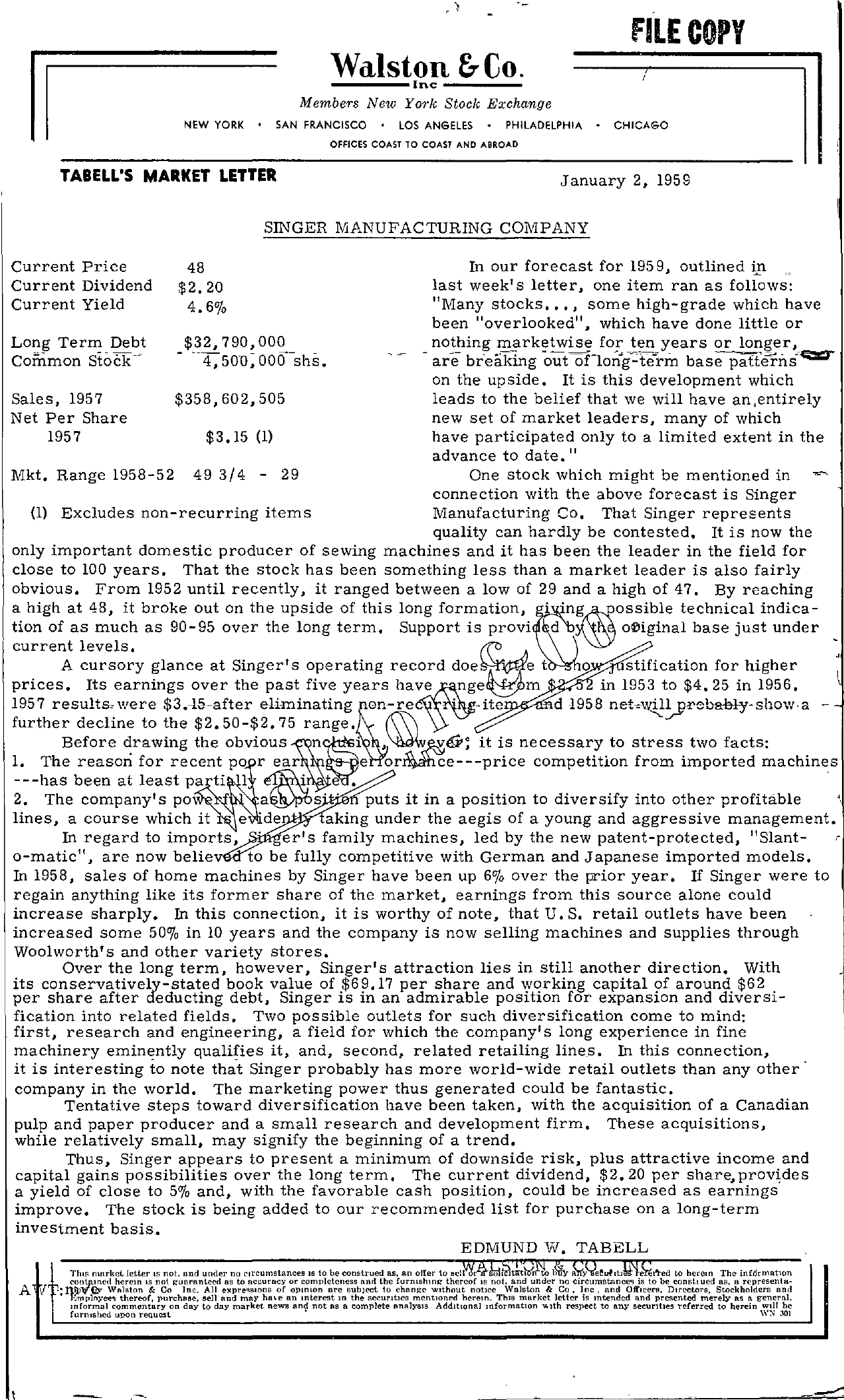 ,i Walston &Co. —–lnc —– Members New York Stock Exchange FILE COPY ,, NEW YORK SAN FRANCISCO LOS ANGELES PHILADELPHIA CHICAGO OFFICES COAST TO COAST AND ABROAD TABELL'S MARKET LETTER January 2, 1959 SINGER MANUFACTURING COMPANY Current Price Current Dividend Current Yield Long Term Debt Common 48 2.20 4.6 32,790,000 – '4,50'0; OOn-shE. In our forecast for 1959, outlined in last week's letter, one item ran as follows Many stocks , some high-grade which have been overlooked, which have done little or nothing marketwise for ten years or longer, – are breaking base on the up side. It is this development which Sales, 1957 Net Per Share 1957 358,602,505 3.15 (1) leads to the belief that we will have an,entirely new set of market leaders, many of which have participated only to a limited extent in the advance to date. Mkt. Range 1958-52 493/4 – 29 One stock which might be mentioned in connection with the above forecast is Singer (1) Excludes non-recurring items Manufacturing Co. That Singer represents quality can hardly be contested. It is now the only important domestic producer of sewing machines and it has been the leader in the field for close to 100 years. That the stock has been something less than a market leader is also fairly obvious. From 1952 until recently, it ranged between a low of 29 and a high of 47. By reaching a high at 48, it broke out on the upside of this long tion of as much as 90-95 over the long term. Support is provi d technical indicaotliginal base just under current levels. A cursory glance at Singer's operating record doe prices. Its earnings over the past five years 1957 resultswere 3.-1,-after eliminating nell-re – ite e t 0 stification for higher m in 1953 to 4.25 in 1956. nd 1958 – further decline to the 2.50-2. 75 – Before drawing the obvious it is necessary to stress two facts 1. The reason for recent po rear e competition from imported machines —has been at least pa ti 1 43iAit e. 2. The company's po puts it in a position to diversify into other profitable \ lines, a course which it e de aking under the aegis of a young and aggressive management. In regard to imports, er's family machines, led by the new patent-protected, Slant- o-matic, are now belie to be fully competitive with German and Japanese imported models. In 1958, sales of home machines by Singer have been up 6 over the prior year. If Singer were to regain anything like its former share of the market, earnings from this source alone could increase sharply. In this connection, it is worthy of note, that U. S. retail outlets have been increased some 50 in 10 years and the company is now selling machines and supplies through Woolworth's and other variety stores. Over the long term, however, Singer's attraction lies in still another direction. With its conservatively-stated book value of 69.17 per share and working capital of around 62 per share after deducting debt, Singer is in an admirable position for expansion and diversi- fication into related fields. Two possible outlets for such diversification come to mind first, research and engineering, a field for which the company's long experience in fine machinery eminently qualifies it, and, second, related retailing lines. In this connection, it is interesting to note that Singer probably has more world-wide retail outlets than any other company in the world. The marketing power thus generated could be fantastic. Tentative steps toward diversification have been taken, with the acquisition of a Canadian pulp and paper producer and a small research and development firm. These acquisitions, while relatively small, may signify the beginning of a trend. Thus, Singer appears to present a minimum of downside risk, plus attractive income and capital gains possibilities over the long term. The current dividend, 2.20 per share, provides a yield of close to 5 and, with the favorable cash position, could be increased as earnings improve. The stock is being added to our recommended list for purchase on a long-term investment basis. EDMUND W. TABELL This mnrket letter IS not. nnd under no circumstances IS to be construed as, an offer to scl( 0 I rtlrtM to h II 11 el!ufltJ e ted to herem The infdrmahon A if contp,med herem IS not gunrantc('cllls to accuracy or completeness anrl the furmshlns! thereof IS not, and under no circumstance'! is to be conshued ns, a representa- . n!).i\f(iY 'Vlllston & Co Inc. All expreo;SlOns of OPlnLon are subject to chanJle WIthout notlce Walston & Co, Inc, and OffIcers, Directors, Stockholders and -r-,mpln)'ee'! thereof, pnrchllse, sell and may an mterest 10 the securIties mentIOned herem. ThIS market letter is 10tended and presented merely as a general, mformal commcntary on day to day market news and not as a complete analYSIS AdditIOnal 1OformatlOn 'illth respect to an)' securIties referred to hCT('in wdl be furlllshed upon r e q u e s t ' \\'\, 301