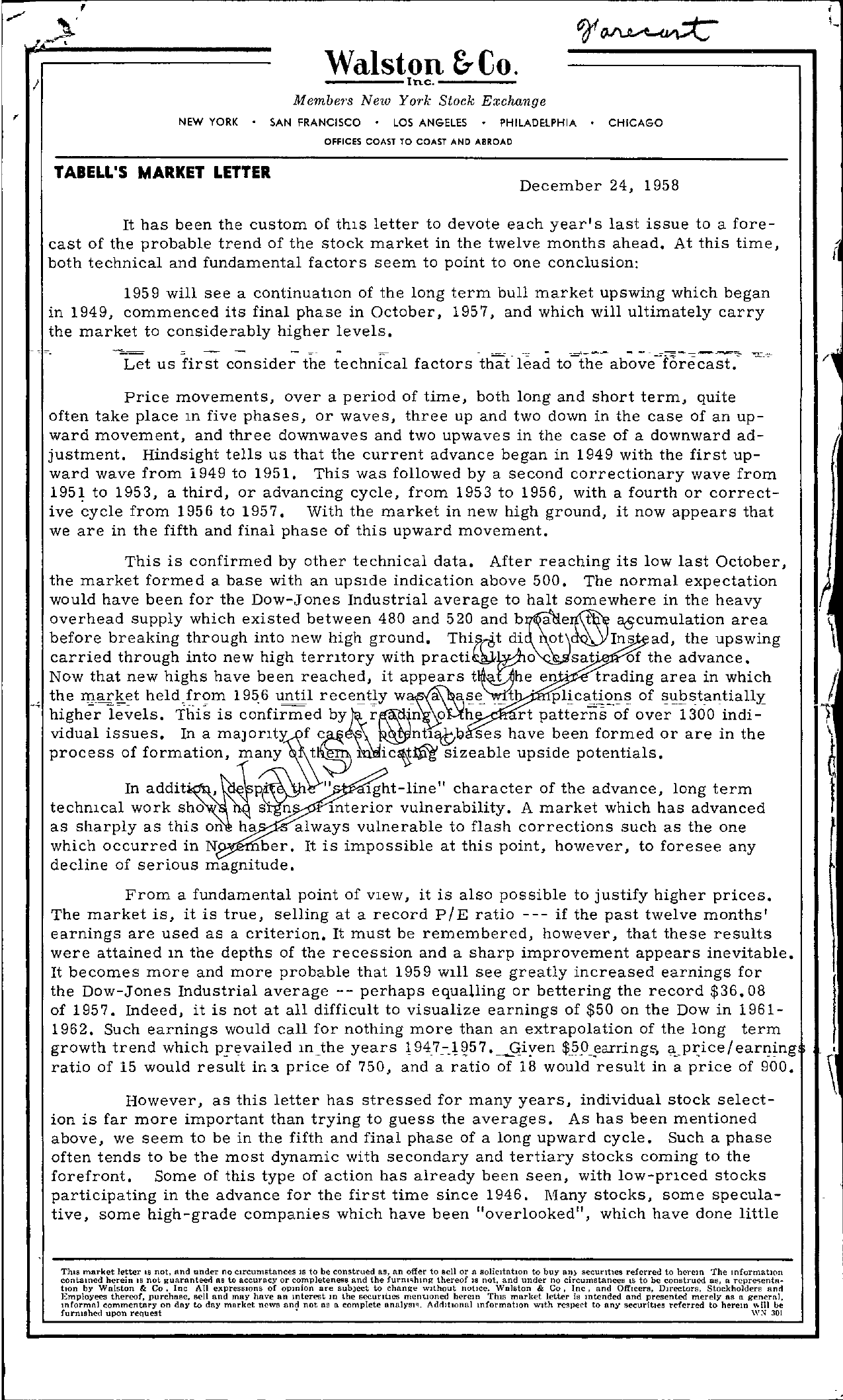 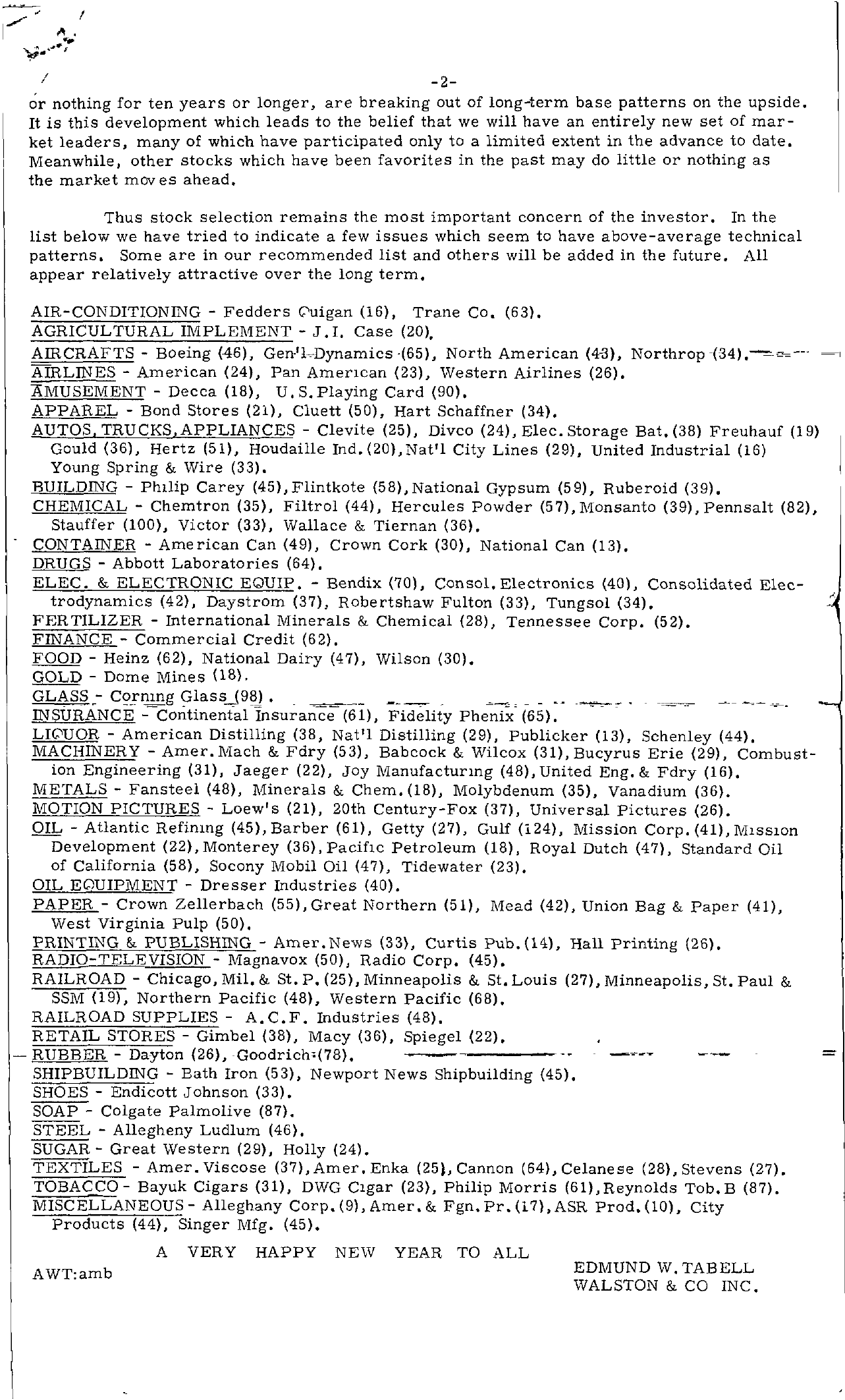 , Walston &Co. / —–Inc. —-Membe,'s New York Stock Excoonge NEW YORK SAN FRANCISCO LOS ANGELES PHILADELPHIA CHICAGO OFFICES COAST TO COAST AND ABROAD TABELL'S MARKET LETTER December 24, 1958 It has been the custom of thIS letter to devote each year's last issue to a forecast of the probable trend of the stock market in the twelve months ahead. At this time, both technical and fundamental factors seem to pOint to one conclusion 1959 will see a continuatlOn of the long term bull market upswing which began in 1949, commenced its final phase in October, 1957, and which will ultimately carry the market to considerably higher levels. I 1- Price movements, over a period of time, both long and short term, quite often take place m five phases, or waves, three up and two down in the case of an upward movement, and three downwaves and two upwaves in the case of a downward ad- justment. Hindsight tells us that the current advance began in 1949 with the first upward wave from 1949 to 1951. This was followed by a second correctionary wave from 1951 to 1953, a third, or advancing cycle, from 1953 to 1956, with a fourth or corrective cycle from 1956 to 1957. With the market in new high ground, it now appears that we are in the fifth and final phase of this upward movement. This is confirmed by other technical data. After reaching its low last October, the market formed a base with an upsIde indication above 500. The normal expectation would have been for the Dow-Jones Industrial average to halt somewhere in the heavy overhead supply which existed between 480 and 520 and aocumulation area before breaking through into new high ground. ThifH,t di ot .dQ0)Ins ad, the upswing carried through into new high terntory with sat' of the advance. Now that new highs have been reached, it appears en' trading area in which ' the heldfrm 1956 Ulltil recel1tlY . of higher levels. This is confirmed rt patterns of over 1300 indi- vidual issues. In a ses have been formed or are in the process of I sizeable upside potentials. In addit, fl' Ight-line character of the advance, long term techmcal work sho s n mterior vulnerability. A market which has advanced as sharply as this on ha always vulnerable to flash corrections such as the one which occurred in N ber. It is impossible at this point, however, to foresee any decline of serious magnitude. From a fundamental pOint of VIew, it is also possible to justify higher prices. The market is, it is true, selling at a record PiE ratio — if the past twelve months' earnings are used as a criterion. It must be remembered, however, that these results were attained m the depths of the recession and a sharp improvement appears inevitable. It becomes more and more probable that 1959 WIll see greatly increased earnings for the Dow-Jones Industrial average — perhaps equalling or bettering the record 36.08 of 1957. Indeed, it is not at all difficult to visualize earnings of 50 on the Dow in 19611962. Such earnings would call for nothing more than an extrapolation of the long term growth trend which PFevailed m Jhe years 194.7-) Giyen .J.D.eaIringe, ,,-.pzice I earning ratio of 15 would result inJ. price of 750, and a ratio of 18 would result in a price of 900. However, as this letter has stressed for many years, individual stock selection is far more important than trying to guess the averages. As has been mentioned above, we seem to be in the fifth and final phase of a long upward cycle. Such a phase often tends to be the most dynamic with secondary and tertiary stocks coming to the forefront. Some of this type of action has already been seen, with low-pnced stocks participating in the advance for the first time since 1946. Many stocks, some specula- tive, some high-grade companies which have been overlooked, which have done little \1 \ ./l 1 \C l ThiS market letter IS not. Rnd under no Clrcumstnnces lS to be construed as, nn offer to Bell or n solicItation to buy an) secuntlCs referred to herem The mformatl(\n contained herein IS not guaranteed Be to accuracy or completeness and the thereof IS not, and under no circumstances IS to be construed as, R rcpre-;entR- tlOn by Walston & Co, Inc All expressions of oPlOion are subJect to chnnge Without notice. Walston & Co, Inc, and Offlcenl. Directors, Stockholders and Employees thereof, purchase, mformal commentnry on dny sell and may have an mterest In the secUrities to day market news and not ns a complete mentioned herem ThIS market letter is mtended AdrhtlOnnl informatIOn WIth respect to any saencdurpitrieessenretefedrrmederetolyhaesreamge….nmerable, furnished upon r e q u e s t ' 301