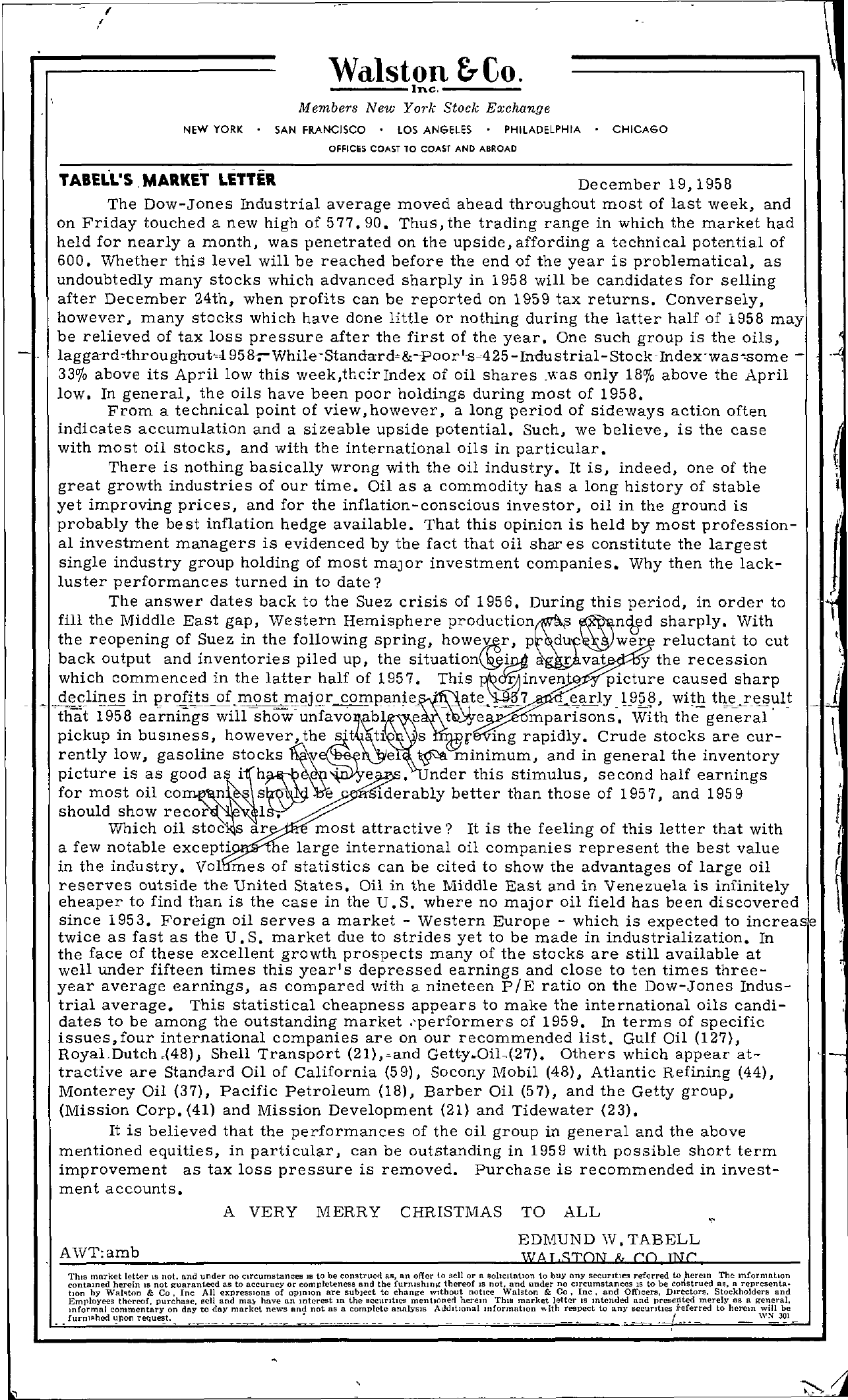 f – ' – – ' Walston &Co. In.c. Members New Y01'k Stock Exchange NEW YORK SAN FRANCISCO LOS ANGELES PHILADELPHIA CHICAGO OFFICES COAST TO COAST AND ABROAD TABELL'S MARKET LETTER December 19,1958 The Dow-Jones Industrial average moved ahead throughout most of last week, and on Friday touched a new high of 577.90. Thus, the trading range in which the market had held for nearly a month, was penetrated on the upside, affording a technical potential of 600. Whether this level will be reached before the end of the year is problematical, as undoubtedly many stocks which advanced sharply in 1958 will be candidate s for selling after December 24th, when profits can be reported on 1959 tax returns. Conversely, however, many stocks which have done little or nothing during the latter half of 1958 may be relieved of tax loss pressure after the first of the year. One such group is the oils, – –', 33'/0 above its April low this week,thcr Index of oil shares was only 18 above the April low. In general, the oils have been poor holdings during most of 1958. From a technical pOint of view, however, a long period of sideways action often indicates accumulation and a sizeable upside potential. Such, we believe, is the case with most oil stocks, and with the international oils in particular. There is nothing basically wrong with the oil industry. It is, indeed, one of the great growth industries of our time. Oil as a commodity has a long history of stable yet improving prices, and for the inflation-conscious investor, oil in the ground is probably the best inflation hedge available. That this opinion is held by most profession- al investment managers is evidenced by the fact that oil shar es constitute the largest single industry group holding of most major investment companies. Why then the lack- luster performances turned in to date The answer dates back to the Suez crisis of 1956. During this period, in order to fill the Middle East gap, western Hemisphere sharply. With I';\ the reopening of Suez in the following spring, p du reluctant to cut back output and inventories piled up, the which commenced in the latter half of 1957. This in o(most a r vat y the recession picture caused sharp with j – -that 1958 earnings will show pickup in busmess, however, rently low, gasoline stocks -t e – mparisons. With the general' ti s ring rapidly. Crude stocks are cur- e minimum, and in general the inventory \ picture is as good aJ ii h s t ' e nder this stimulus, second half earnings for most oil co s should show Which oil stoc'! s ar e iderably better than those of 1957, and 1959 most attractive It is the feeling of this letter that with f a few notable cue large international oil companies represent the best value ( in the industry. Volllmes of statistics can be cited to show the advantages of large oil reserves outside the United States. Oil in the Mi'ddle East and in Venezuela is infinitely eheaper to find than is the case in the U. S. where no major oil field has been discovered \ since 1953. Foreign oil serves a market – Western Europe – which is expected to increasje twice as fast as the U S. market due to strides yet to be made in industrialization. In the face of these excellent growth prospects many of the stocks are still available at well year under fifteen times average earnings, this year's depress as compared with a endineeaterneinngPsIEanrdatciloo se on to ten the D times threeow-Jones Ind us- trial average. This statistical cheapness appears to make the international oils candi- dates to be among the outstanding market .'performers of 1959. In terms of specific issues,four international companies are on our recommended list. Gulf Oil (127), RoyaL Dutch .(48); Shell Transport (21),and Others which appear at- '1-, tractive are Standard Oil of California (59), Socony Mobil (48), Atlantic Refining (44), Monterey Oil (37), Pacific Petroleum (18), Barber Oil (57), and the Getty group, (Mission Corp. (41) and Mission Development (21) and Tidewater (23). It is believed that the performances of the oil group in general and the above mentioned equities, in particular, can be outstanding in 1959 with possible short term improvement as tax loss pressure is removed. Purchase is recommended in investment accounts. A VERY MERRY CHRISTMAS TO ALL AWTamb EDMUND W. TABELL WAJ,STON & CO INC ThIS mnrket letter IS not. and under no Circumstances lS to be construed as, nn offer to sell or II, aohcltntlon to buy lny secuTlties referred to ,herem The mformatlon contamed herein IS not guaranteed as to accuracy or complcuness and the thereof lS not. and under no Clrcumstanccs 1S to be construed as, n representa- tion by & Co. Inc All expressIons of OPlnJon are subject to change WIthout notice Walston & Co, Inc, and OffIcers, DIrectors, Stockholders and Fmployees thereof purchase eel! and rna have an mterest III the sccurltles mentioned hcrem ThIS market lettcr IS Illtcnded and presented merely as a gen(!rnl, furDH.hed on day to day market news and not as n complete anaiYSl!; request . AddItIonal mformatlOn v.ith respect to any seCUfltJ–e–s.1r(!ferred to hcrem will W)/ be