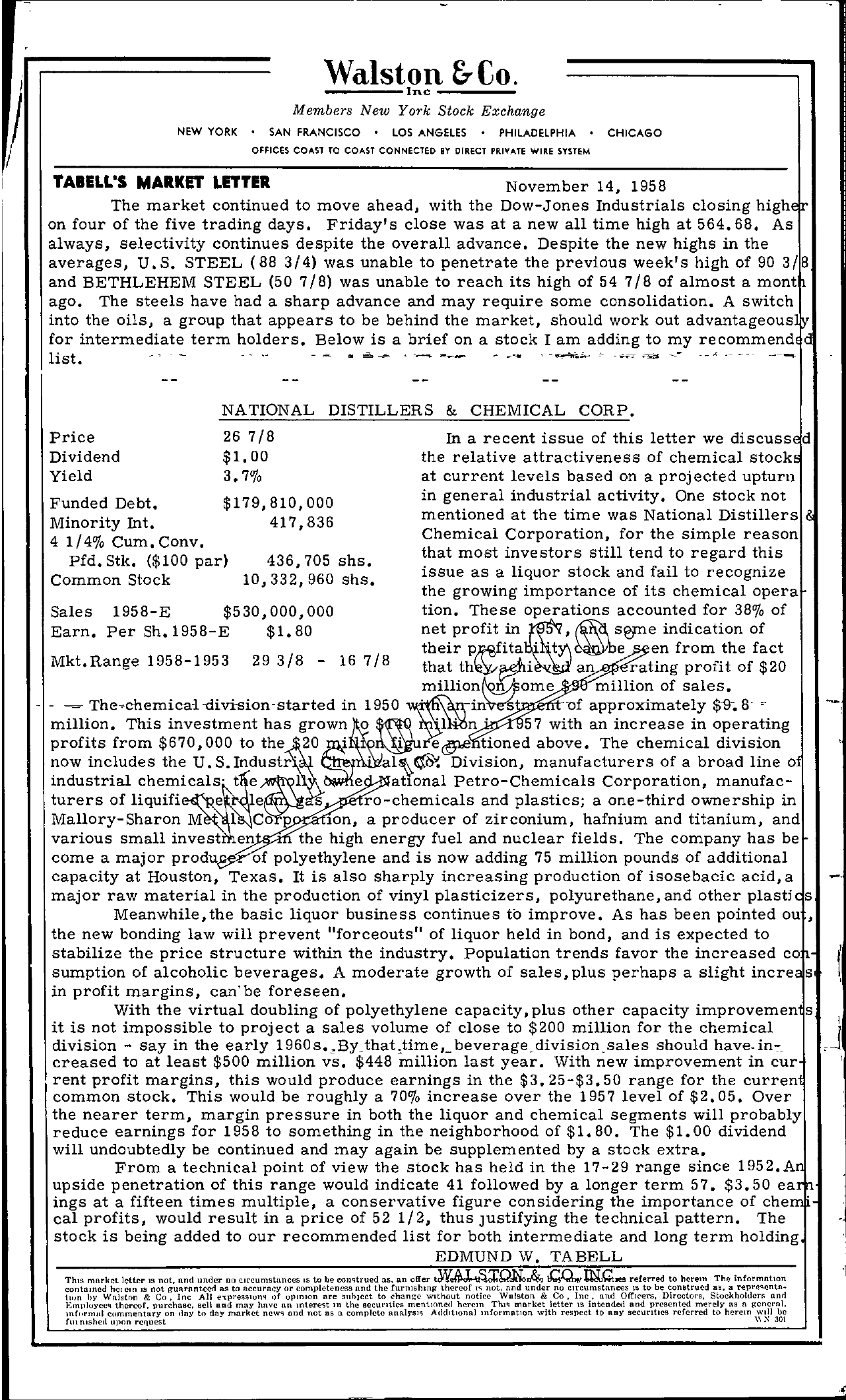 ! I NEW YORK Walston &- Co. —–lnc —– Members New York Stock Exchange SAN FRANCISCO LOS ANGELES PHILADELPHIA OFFICES COAST TO COAST CONNECTED BY DIRECT PRIVATE WIRE SYSTEM CHICAGO TABELL'S MARKET LETTER November 14, 1958 The market continued to move ahead, with the Dow-Jones Industrials closing high on four of the five trading days. Friday's close was at a new all time high at 564.68. As always, selectivity continues despite the overall advance. Despite the new highs in the averages, U.S. STEEL (883/4) was unable to penetrate the previous week's high of 903/8 and BETHLEHEM STEEL (50 7/8) was unable to reach its high of 547/8 of almost a mont ago. The steels have had a sharp advance and may require some consolidation. A switch into the oils, a group that appears to be behind the market, should work out advantageous for intermediate term holders. Below is a brief on a stock I am adding to my recommend list. ' – —- — !- …..—-c —- – .- – – – – – – – NATIONAL DISTILLERS & CHEMICAL CORP. Price Dividend 26 7/8 1. 00 In a recent issue of this letter we discuss the relative attractiveness of chemical stock Yield 3.7 Funded Debt. 179,810,000 Minority Int. 417,836 4 1/4 Cum. Conv. Pfd. Stk. (100 par) 436,705 shs. Common Stock 10,332,960 shs. Sales 1958-E 530,000,000 Earn. PerSh.1958-E 1.80 Mkt.Range 1958-1953 293/8 – 16 7/8 at current levels based on a projected upturn in general industrial activity. One stock not mentioned at the time was National Distillers Chemical Corporation, for the simple reason that most investors still tend to regard this issue as a liquor stock and fail to recognize the growing importance of its chemical opera tion. These operations accounted for 38 of net profit in their Plrlfita t that th'E')yti an indication of en from the fact rating profit of 20 million(QrVJ,ome million of sales. -o -started in 1950 t-uf approximately 8- 0 million. This investment has 0 . 57 with an increase in operating profits from 670,000 to theiO i now includes the U. S. Industr' , al\ tioned above. The chemical division Division, manufacturers of a broad line 0 industrial t turers of liquifi e e Mallory-Sharon M I Co e atlOnal Petro-Chemicals Corporation, manufacs ro-chemicals and plastics; a one-third ownership in lOn, a producer of zirconium, hafnium and titanium, and various small invest en the high energy fuel and nuclear fields. The company has be come a major produ of polyethylene and is now adding 75 million pounds of additional capacity at Houston, Texas. It is also sharply increasing production of isosebacic acid, a major raw material in the production of vinyl plasticizers, polyurethane, and other plasti s Meanwhile,the basic liquor business continues to improve. As has been pointed ou , – the new bonding law will prevent forceouts of liquor held in bond, and is expected to stabilize the price structure within the industry. Population trends favor the increased co Isumption of alcoholic beverages. A moderate growth of sales, plus perhaps a slight incre s , in profit margins, can'be foreseen. With the virtual doubling of polyethylene capacity, plus other capacity improvemen s it is not impossible to project a sales volume of close to 200 million for the chemical division – say in the early 1960s.,Bythat,timeL beverage.divisionsales should have-in- I .J creased to at least 500 million vs. 448 million last year. With new improvement in cur rent profit margins, this would produce earnings in the 3.25-3.50 range for the curren common stock. This would be roughly a 70 increase over the 1957 level of 2.05. Over the nearer term, margin pressure in both the liquor and chemical segments will probably reduce earnings for 1958 to something in the neighborhood of 1.80. The 1.00 dividend will undoubtedly be continued and may again be supplemented by a stock extra. From a technical point of view the stock has held in the 17-29 range since 1952.A upside penetration of this range would indicate 41 followed by a longer term 57. 3.50 ea ings at a fifteen times multiple, a conservative figure considering the importance of che cal profits, would result in a price of 52 1/2, thus Justifying the technical pattern. The stock is being added to our recommended list for both intermediate and long term holding EDMUND W. TABELL ThiS mll.rklJlletter IS not, nnd under no cIrcumstances IS to be conqtrued as, an offer referred to herem The information contaIned hel ('In IS not as to accuracy or completeness and the furnlshlnR' thereof 1; not, nnd under no cIrcumstances IS to be conatrued as, a rcprecmtn. hun hy & Co. Inc All C'lprCSSlUn9 of opinIOn arc suhJect to ehanJ;e Without notice Wnlston & Co. Inc, and Offlecrs, Directors, anrl Ernllluycl!'1 thereof purchase. sell and may hnve un mterEt m the seCUrities mentloned hercm Thl'l market letter IS intended and presented merely as n cncrnl, mfrmul on 'lny to dny market m!W9 (lnd not 1190 11 complete anab'sl., Additional mformntlon with respect to any referred to herem WI be fLll nlshed upon request \\. 301 'I .(