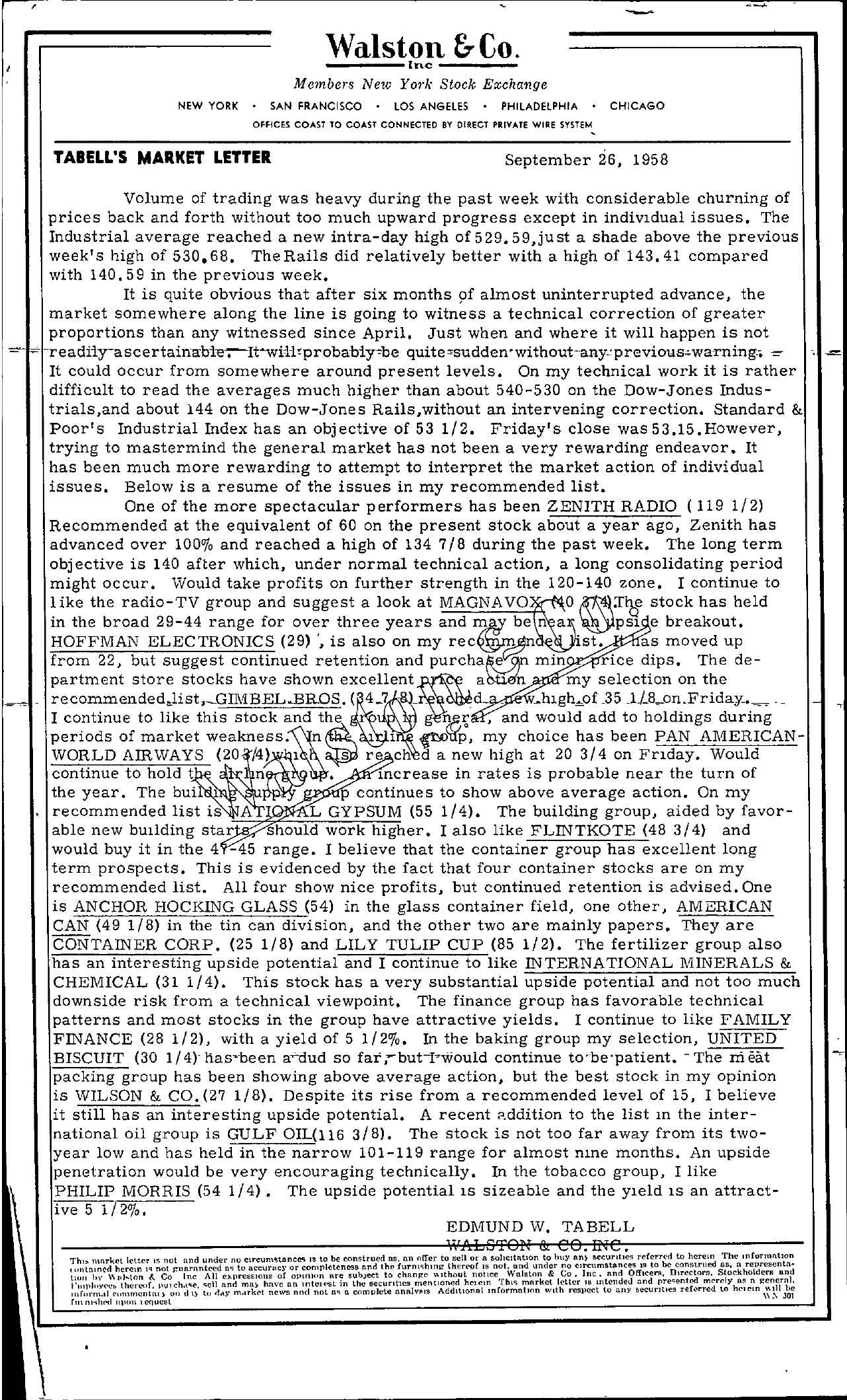 , —- Walston &Co. Inc M cmbas New YOk Stock Exchange NEW YORK SAN FRANCISCO LOS ANGELES PHILADELPHIA CHICAGO OFFICES COAST TO COAST CONNECTED BY DIRECT PRIVATE WIRE SYSTEM TABELL'S MARKET LETTER September 26, 1958 Volume of trading was heavy during the past week with considerable churning of prices back and forth without too much upward progress except in indiv1dual issues. The Industrial average reached a new intra-day high of529.59,just a shade above the previous week's high of 530.68. The Rails did relatively better with a high of 143.41 compared with 140.59 in the previous week. It is quite obvious that after six months 9f almost uninterrupted advance, the market somewhere along the line is going to witness a technical correction of greater proportions than any witnessed since April. Just when and where it will happen is not .. It could occur from somewhere around present levels. On my technical work it is rather difficult to read the averages much higher than about 540-530 on the Dow-Jones Indus- trials,and about 144 on the Dow-Jones Rails,without an intervening correction. Standard Poor's Industrial Index has an objective of 531/2. Friday's close was53.15.However, trying to mastermind the general market has not been a very rewarding endeavor. It has been much more rewarding to attempt to interpret the market action of individual issues. Below is a resume of the issues in my recommended list. One of the more spectacular performers has been ZENITH RADIO (119 1/2) Recommended at the equivalent of 60 on the present stock about a year ago, Zenith has advanced over 100 and reached a high of 134 7/8 during the past week. The long term objective is 140 after which, under normal technical action, a long conSOlidating period might occur. Would take profits on further strength in the 120-140 zone. I continue to I ike the radiO-TV group and suggest a look at MAGNA VO 0 stock has held in the broad 29-44 range for over three years and be n a e breakout. HOFFMAN ELECTRONICS (29) ',is also on my from 22, but suggest continued retention and .partment store stocks have shown 'st. as moved up . min rice dips. The de- ahlW'n my selection on the d.. .35 . I continue to like this stock and the g!),eX ,and would add to holdings during periods of market 1 1 my choice has been PAN AMERICAN- WORLD AIRWAYS (20 re cli d a new high at 203/4 on Fnday. Would continue to hold t n . mcrease in rates is probable near the turn of the year. The bui p continues to show above average action. On my recommended list is A L GYPSUM (55 1/4). The building group, aided by favor- able new bU11ding star should work higher. I also like FLINTKOTE (48 3/4) and would buy it in the 4 -45 range. I believe that the container group has excellent long term prospects. This is evidenced by the fact that four container stocks are on my recommended list. All four show nice profits, but continued retention is advised. One is ANCHOR HOCKING GLASS (54) in the glass container field, one other, AMERICAN CAN (49 1/8) in the tin can division, and the other two are mainly papers. They are CONTAINER CORP. (25 1/8) and LILY TULIP CUP (85 1/2). The fertilizer group also san . upside potential and I continue to like INTERNATIONAL MINERALS & CHEMICAL (31 1/4). This stock has a very substantial upside potential and not too much downside risk from a technical viewpoint. The finance group has favorable technical rns and most stocks in the group have attractive yields. I continue to like FAMILY ANCE (28 1/2), with a yield of 5 1/2,,/0. In the baking group my selection, UNITED BISCUIT (30 1/4) has'been a-c-dud so fat continue to'bepatient. – The IIi eat king group has been showing above average action, but the best stock in my opinion WILSON & CO. (27 1/8). Despite its rise from a recommended level of 15, I believe still has an interesting upside potential. A recent Hddition to the list m the inter- tional oil group is GULF OIL(116 3/8). The stock is not too far away from its two- ear low and has held in the narrow 101-119 range for almost mne months. An upside enetration would be very encouraging technically. In the tobacco group, I like MORRIS (54 1/4). The upside potential 1S sizeable and the Y1eld 1S an attract- EDMUND W. TABELL V/ILS'f'OPJ & CO. litC. Thl I1\nrkct leUer IS not and under no CITcum;tancC'I IS to be construed as, an offer to sell or a sohcltnllOn to huy an) securities referred to hereIn The mformntlOn (llntntn'd herem not Juornntced n; to accurllCY or completeness and the fUTnJ;hmg thereof IS not, and under no CIrcumstances IS to be construed as, n rcprcsenln- tUJI! ii \\ ,00…tOIl l. Co Inc All c).prCSSlOns of opInion nr subject to change notice, Walston & Co. Inc. nnn Officers, Directors. Stockholders lind !'lI1pJy,t.' thereof, 'lcll and have nn ll1t(l(t In the securitIes mentIoned helcm fhl'; mllTkcl letter HI Intended and pre;ente! merely liS n IUrI'rn,1l ('Illm('ntnl) on d \) to lias m.lrkeot nc\,.'5 lind not 11'1 n complete nnniVl'as Addltlonni mformntlOn With reSllect to any seCUrities referred to hClcln Joi rlll 111-111'1 ll\!(ll\ 1Cfjucst