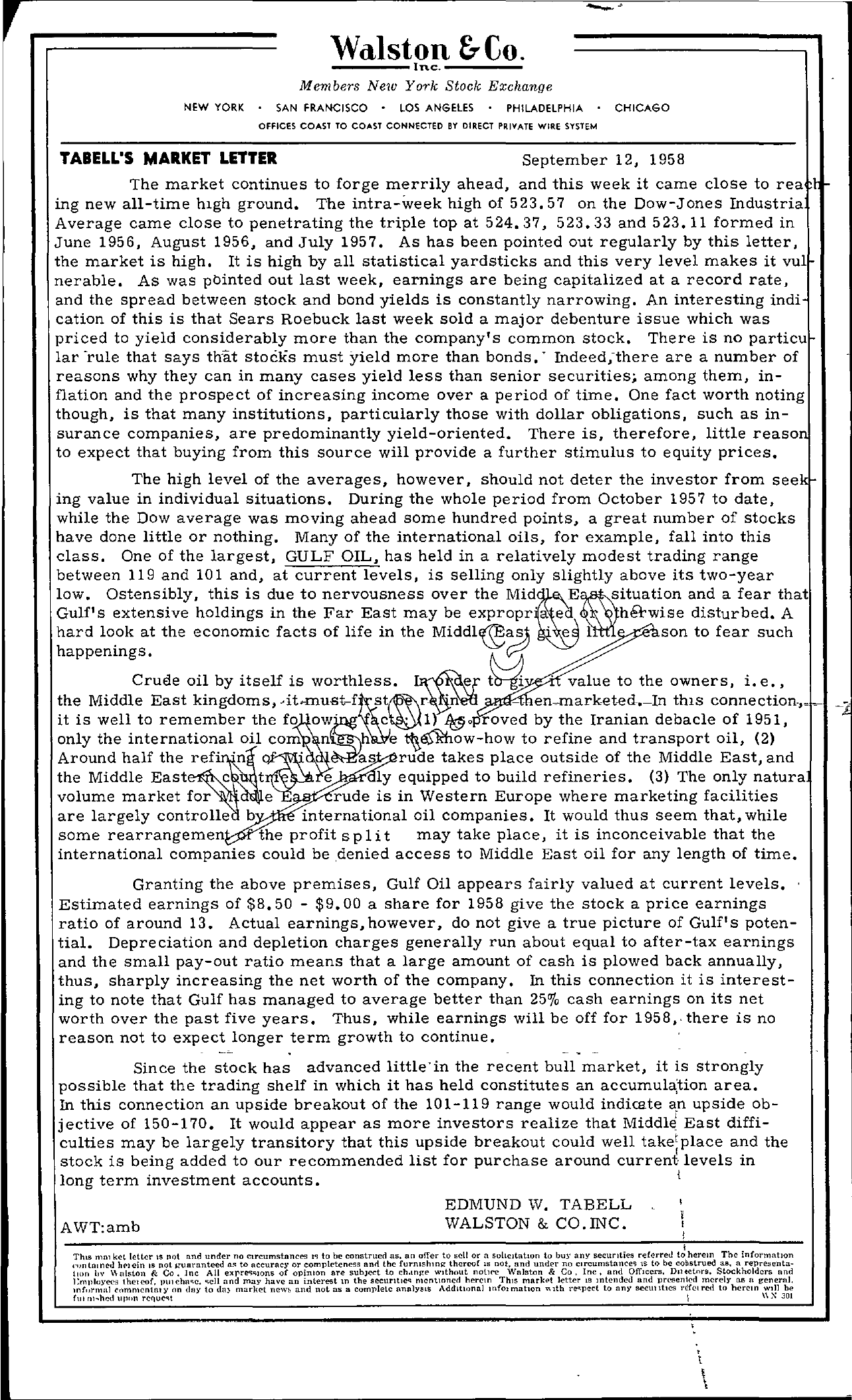 Wdlston &Co. Inc, – – – – – -' Members New YOTk Stock EXchange NEW YORK SAN FRANCISCO LOS ANGELES PHILADELPHIA OFFICES COAST TO COAST CONNECTED BY DIRECT PRIVATE WIRE SYSTEM CHICAGO TABELL'S MARKET LETTER September 12, 1958 The market continues to forge merrily ahead, and this week it came close to rea ing newall-time high ground. The intra-week high of 523.57 on the Dow-Jones Industria Average came close to penetrating the triple top at 524.37, 523.33 and 523.11 formed in June 1956, August 1956, and July 1957. As has been pointed out regularly by this letter, the market is high. It is high by all statistical yardsticks and this very level makes it vul nerable. As was pOinted out last week, earnings are being capitalized at a record rate, and the spread between stock and bond yields is constantly narrowing. An interesting indi cation of this is that Sears Roebuck last week sold a major debenture issue which was priced to yield considerably more than the company's common stock. There is no particu lar rule that says that stocKS must yield more than bonds. Indeed,-there are a number of reasons why they can in many cases yield less than senior securities; among them, inflation and the prospect of increasing income over a period of time. One fact worth noting though, is that many institutions, particularly those with dollar obligations, such as insurance companies, are predominantly yield-oriented. There is, therefore, little reaso to expect that buying from this source will provide a further stimulus to equity prices. The high level of the averages, however, should not deter the investor from see ing value in individual situations. During the whole period from October 1957 to date, while the Dow average was moving ahead some hundred points, a great number of stocks have done little or nothing. Many of the international oils, for example, fall into this class. One of the largest, GULF OIL, has held in a relatively modest trading range between 119 and 101 and, at current levels, is selling only slightly above its two-year low. Ostensibly, this is due to nervousness over the and a fear that Gulf's extensive holdings in the Far East may be expropr a e het-wise disturbed. A hard IO,ok at the economic facts of life in the ,e I son to fear such happenmgs. Cruele oil by itself is worthless. t'o–gj, 'value to the owners, i. e., the Middle East kingdoms, it is well to remember the fOiWS' – thiS connection, Wo roved by the Iranian debacle of 1951, only the international oil com n h e to refine and transport oil, (2) Around half the refi 'n as rude takes place outside of the Middle East, and the Middle East c t e ly equipped to build refineries. (3) The only natura volume market for ' e rude is in Western Europe where marketing facilities are largely controlle b international oil companies. It would thus seem that, while some rearrangemen the profit s p lit may take place, it is inconceivable that the international companies could be .denied access to Middle East oil for any length of time. Granting the above premises, Gulf Oil appears fairly valued at current levels. Estimated earnings of 8.50 – 9.00 a share for 1958 give the stock a price earnings ratio of around 13. Actual earnings,however, do not give a true picture of Gulf's potential. Depreciation and depletion charges generally run about equal to after-tax earnings and the small pay-out ratio means that a large amount of cash is plowed back annually, thus, sharply increaSing the net worth of the company. In this connection it is interesting to note that Gulf has managed to average better than 25 cash earnings on its net worth over the past five years. Thus, while earnings will be off for 1958,.there is no reason not to expect longer term growth to continue. Since the stock has advanced little in the recent bull market, it is strongly possible that the trading shelf in which it has held constitutes an accumula;tion area. In this connection an upside breakout of the 101-119 range would indicate a,n upside ob- jective of 150-170. It would appear as more investors realize that East diffi- culties may be largely transitory that this upside breakout could well take;place and the stock is being added to our recommended list for purchase around current levels in long term investment accounts. \ EDMUND W. TABELL AWTamb WALSTON & CO. INC. , ThiS mill k'l iettlr IS 110t and under no CIrcumstances to be construed as, nn offer to sdl or n soLICitatIOn to buy any securlties referred to herem The informntlOn 'ntlllneol hf'lein IS lIot /.!unrnnteed n.' to accuracy or completeness and the furnishing thereof IS not, and under no Clrcumst.mceg IS to be construed as. a rePresenta- tIOn hy \\nlstol\ & Co. Inc All expre;lOns of opinIon nre subject to ch.lnge Without notlf'C \\'alston & Co. Inc. and Officers, Dutclnrs. Stockholders and lmllluyees theleof. pUlchi\;c, ;cll and may have an interest In the securltlC'l mentIOned hereIn ThIS mark..t letter IS Intended and IJresenled merely as n general. 1I1fllrmni (lmmentm y on dny to mnrket ne,,'! and not as a complete nnnly.!lIs AddItIOnal InfOI mahon lth re-pcct to any secUllhes rUel red to herein Will be fill upon reflu(';t \ \\-; 301 \ \