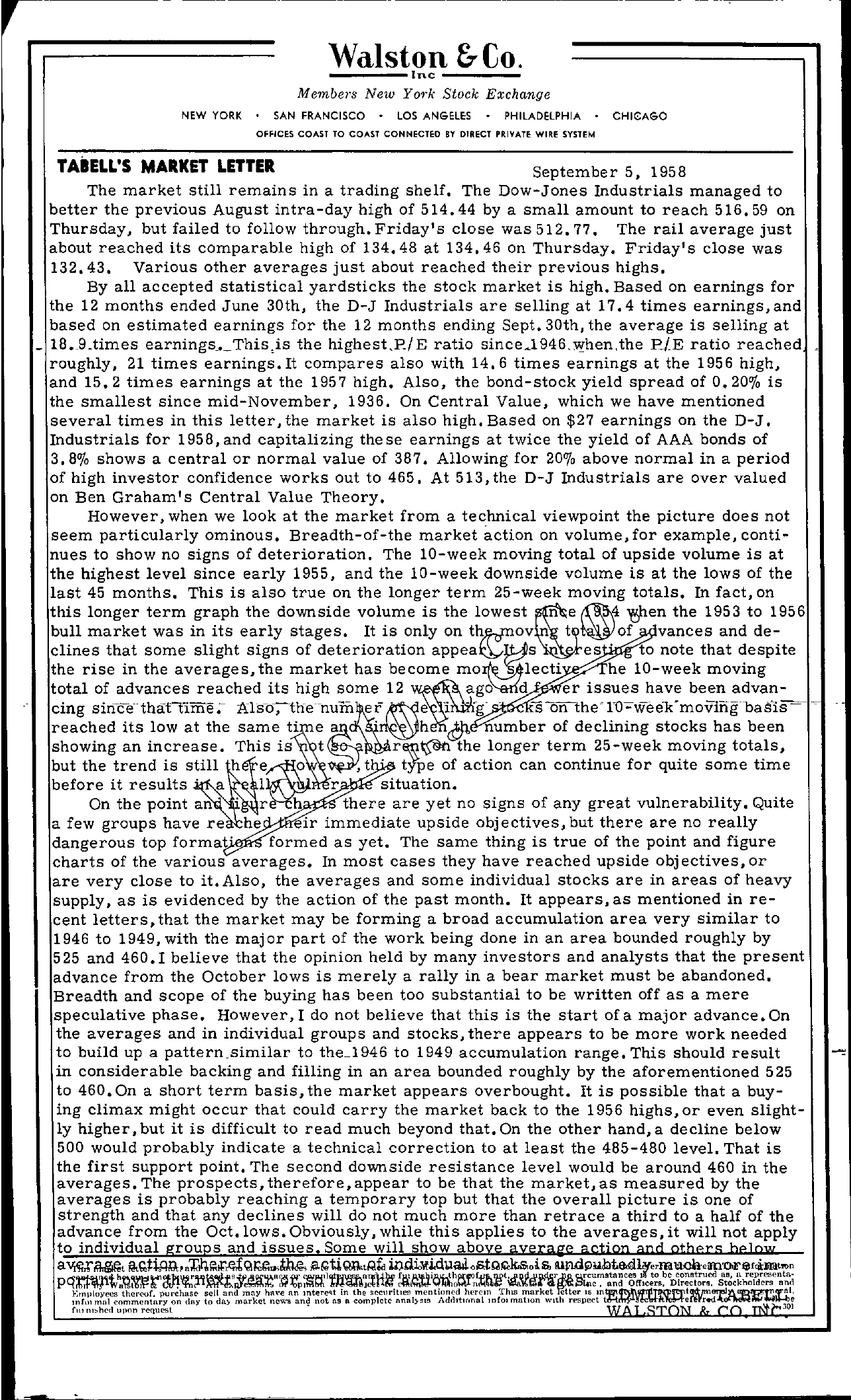 —— – – – – – – – – – – – – – – – – – – – – – – – – – – – – – – – – – – — Walston &Co. Inc Members New yo,-k Stock Exchange NEW YORK SAN FRANCISCO LOS ANGELES PHILADELPHIA OFFICES COAST TO COAST CONNECTED BY DIRECT PRIVATE WIRE SYSTEM CHICAGO TAIELL'S MARKET LETTER September 5, 1958 The market still remains in a trading shelf. The Dow-Jones Industrials managed to better the previous August intra-day high of 514.44 by a small amount to reach 516.59 on Thursday, but failed to follow through. Friday's close was512.77. The rail average just about reached its comparable high of 134.48 at 134.46 on Thursday. Friday's close was 132.43. Various other averages just about reached their previous highs. By all accepted statistical yardsticks the stock market is high. Based on earnings for the 12 months ended June 30th, the D-J Industrials are selling at 17.4 times earnings,and based on estimated earnings for the 12 months ending Sept. 30th, the average is selling at 18 .9.times earnings.This)s the highest ,p./ E ratio ,the pJE ratio reached roughly, 21 times earnings. It compares also with 14.6 times earnings at the 1956 high, and 15.2 times earnings at the 1957 high. Also, the bond-stock yield spread of 0.20 is the smallest since mid-November, 1936. On Central Value, which we have mentioned several times in this letter, the market is also high. Based on 27 earnings on the D-J. Industrials for 1958,and capitalizing these earnings at twice the yield of AAA bonds of 3.8 shows a central or normal value of 387. Allowing for 20'70 above normal in a period of high investor confidence works out to 465. At 513, the D-J Industrials are over valued on Ben Graham's Central Value Theory. However, when we look at the market from a technical viewpoint the picture does not seem particularly ominous. Breadth-of-the market action on volume, for example, conti- nues to show no signs of deterioration. The 10-week moving total of upside volume is at the highest level since early 1955, and the 10-week downside volume is at the lows of the last 45 months. This is also true on the longer term 25-week moving totals. In fact, on this longer term graph the downside volume is the lowest s e 't)hen the 1953 to 1956 bull market was in its early stages. It is only on th)hiffiov n t vances and de- clines that some slight signs of deterioration – es' to note that despite 0the rise in the averages, the market has become its high he 10-week moving is,sues cmg smce that tlme. 1I;1so, the num!r' reached its low at the same time;, lg S on the lO-week movmg basls . c8t number of declining stocks has been showing an increase. This the longer term 25-week moving totals, but the trend is h ,t' type of action can continue for quite some time before it results' a 1 r situation. On the pOint an ' r h there are yet no signs of any great vulnerability. Quite a few groups have re he eir immediate upside objectives, but there are no really dangerous top format' formed as yet. The same thing is true of the point and figure charts of the various averages. In most cases they have reached upside objectives, or are very close to it. Also, the averages and some individual stocks are in areas of heavy supply, as is evidenced by the action of the past month. It appears, as mentioned in re- cent letters, that the market may be forming a broad accumulation area very similar to 1946 to 1949,with the major part of the work being done in an area bounded roughly by 525 and 460. I believe that the opinion held by many investors and analysts that the present advance from the October lows is merely a rally in a bear market must be abandoned. Breadth and scope of the buying has been too substantial to be written off as a mere speculative phase. However, I do not believe that this is the start ofa major advance.On the averages and in individual groups and stocks, there appears to be more work needed to build up a patternsimilar to the1946 to 1949 accumulation range. This should result in considerable backing and filling in an area bounded roughly by the aforementioned 525 to 460. On a short term basis, the market appears overbought. It is possible that a buy- ing climax might occur that could carry the market back to the 1956 highs, or even slight- ly higher, but it is difficult to read much beyond that. On the other hand, a decline below 500 would probably indicate a technical correction to at least the 485-480 level. That is the first support pOint. The second downside resistance level would be around 460 in the averages. The prospects, therefore, appear to be that the market, as measured by the averages is probably reaching a temporary top but that the overall picture is one of strength and that any declines will do not much more than retrace a third to a half of the advance from the Oct. lows. Obviously, while this applies to the averages, it will not apply to individual groups and issues. Some will show above average action and others below i;l,g.gc P'1.rtlTt'''ttt''Wa'Mt\')\-I; …,.. ..''f'''''''''' Qn.cQtd wdi'lfi.d1.la.l s, tllna!luJatedI7M('0mb, lslWo..h'm.mado'.r'e0fo,ipm'ffi..CnCa', 'ii1n.';tai'a and Officers, Directors. Stockholders and Empluyees thereof. purchase sell and may hnve nn mtere'lt in the sccurilles mentioned herem ThiS market ctter IS lIlfm mnl commentary on dny to market Ile\\'l! not as a complete nnaisls Addlt1(lnai InfOI matton With respect rr.d J fu! llI..hci III)On request 0