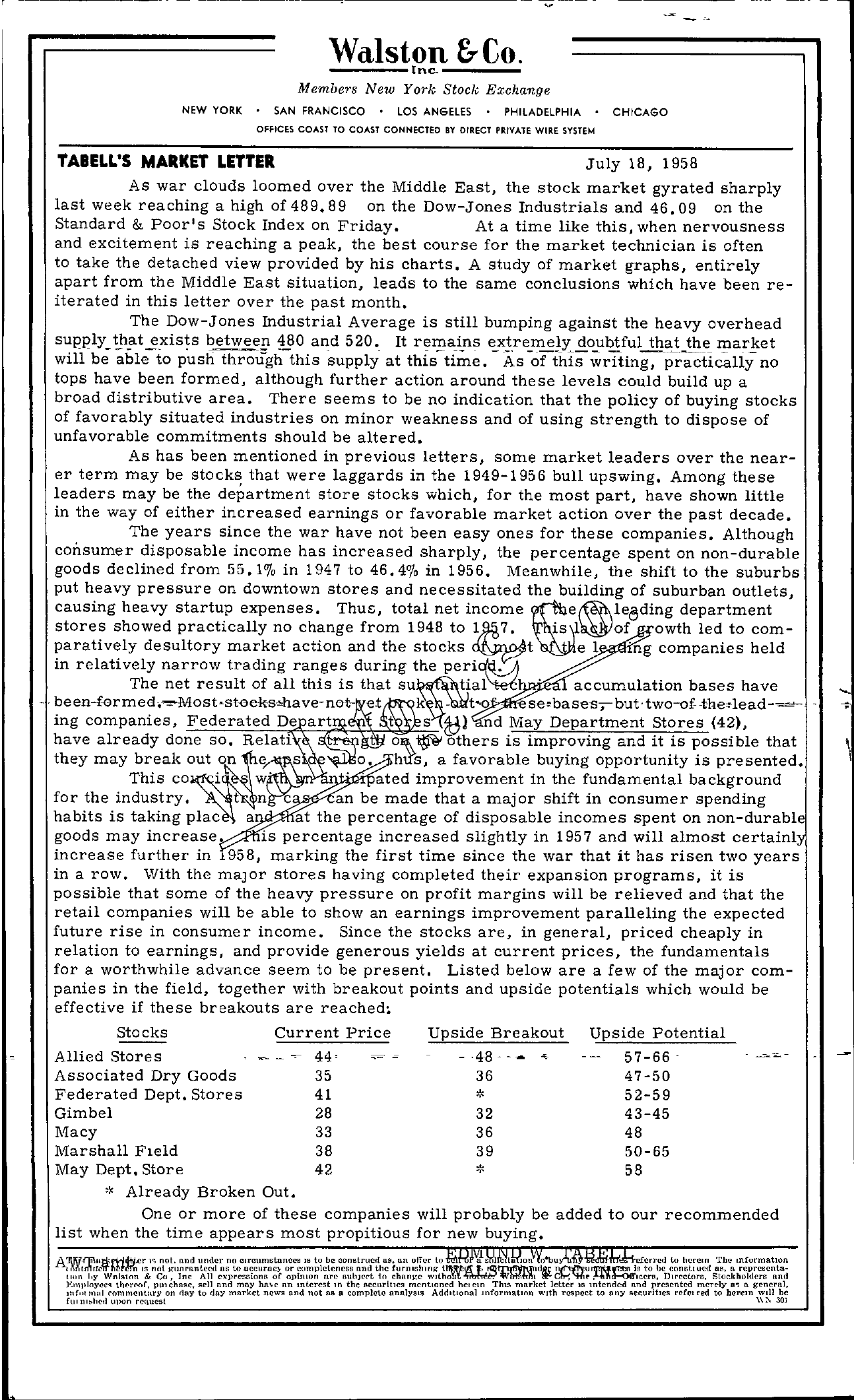 ———- – – NEW YORK W—a-lsItnocn.&–C-o-. Members New York Stock Exchange SAN FRANCISCO LOS ANGELES PHILADELPHIA OFfiCES COAST TO COAST CONNECTED BY DIRECT PRIVATE WIRE SYSTEM CHICAGO fABELL'S MARKET LETTER July 18, 1958 As war clouds loomed over the Middle East, the stock market gyrated sharply last week reaching a high of489.89 on the Dow-Jones Industrials and 46.09 on the Standard & Poor's Stock Index on Friday. At a time like this, when nervousness and excitement is reaching a peak, the best course for the market technician is often to take the detached view provided by his charts. A study of market graphs, entirely apart from the Middle East situation, leads to the same conclusions which have been re- iterated in this letter over the past month. The Dow-Jones Industrial Average is still bumping against the heavy overhead sUrPly that exists between and 520. It remains extremely doubtful that the market able-to push through-thiS supply at -As -ofthis;riting,p-racticallyno tops have been formed, although further action around these levels could build up a broad distributive area. There seems to be no indication that the policy of buying stocks of favorably situated industries on minor weakness and of using strength to dispose of unfavorable commitments should be altered. As has been mentioned in previous letters, some market leaders over the nearer term may be stocks that were laggards in the 1949-1956 bull upswing. Among these leaders may be the department store stocks which, for the most part, have shown little in the way of either increased earnings or favorable market action over the past decade. The years since the war have not been easy ones for these companies. Although consumer disposable income has increased sharply, the percentage spent on non-durable goods declined from 55.1 in 1947 to 46.4 in 1956. Meanwhile, the shift to the suburbs put heavy pressure on downtown stores and necessitated the building of suburban outlets, causing heavy startup expenses. ThuE, total net income department 1t7..stores showed practically no change from 1948 to is l'aMJof owth led to com- paratively desultory market action and the stocks e I 'ng companies held in relatively narrow trading ranges during the periq'q.v.J\ The net result of all this is that been-formed,,,.,Moststoekschave-not- e-t ing companies, Federated De art t have already done so. Relati a1 accumulation bases have K- – s (Bl d May Department Stores (42), W'9' others is improving and it is possible that they may break out on hus, a favorable buying opportunity is presented. This co ated improvement in the fundamental background for the industry. c an be made that a major shift in consumer spending habits is taking plac a at the percentage of disposable incomes spent on non-durabl goods may increase. is percentage increased slightly in 1957 and will almost certainl increase further in 958, marking the first time since the war that it has risen two years in a row. With the maJor stores having completed their expansion programs, it is possible that some of the heavy pressure on profit margins will be relieved and that the retail companies will be able to show an earnings improvement paralleling the expected future rise in consumer income. Since the stocks are, in general, priced cheaply in relation to earnings, and provide generous yields at current prices, the fundamentals for a worthwhile advance seem to be present. Listed below are a few of the major com- panies in the field, together with breakout points and upside potentials which would be effective if these breakouts are reached; Stocks Current Price Upside Breakout Upside Potential Allied Stores Associated Dry Goods Federated Dept. Stores Gimbel Macy Marshall Field May Dept. Store Already Broken Out. 44 35 41 28 33 38 42 – 48 – -36 32 36 39 57-66 47-50 52-59 43-45 48 50-65 58 One or more of these companies will probably be added to our recommended list when the time appears most propitious for new buying. 10; not. nnd under no Circumstances 18 to be construcon a9, un offer to a1s tu Ion ' to herem The mformatIon IS not us to or completeness nnd the furnlshmg J, tHIll loy Wnlston & Co, Inc All expressions of opinIon nre 6ubJc('t to chonge wlthoWt whffibJln cb- 'ill' i9 to be constlued as, a reprcsenta Stockholders and Elllllloycl.''1 ttwrf'OC, plllchnse, sell and may haH' an Interest In thc 8cclIritH!9 mentioned helem ThIS market letter IS mtcnded Iud rrcscnted meTely a'J a geneTal, IlIf. mill ('ommentnry on (jay to day maTket news and not as a complete analYSIS Addlttonal lnformatlnn WIth Tespect to any securlbes reCeI red to herem Will be fllllllth,d up.m request \\;\ 30J …. –