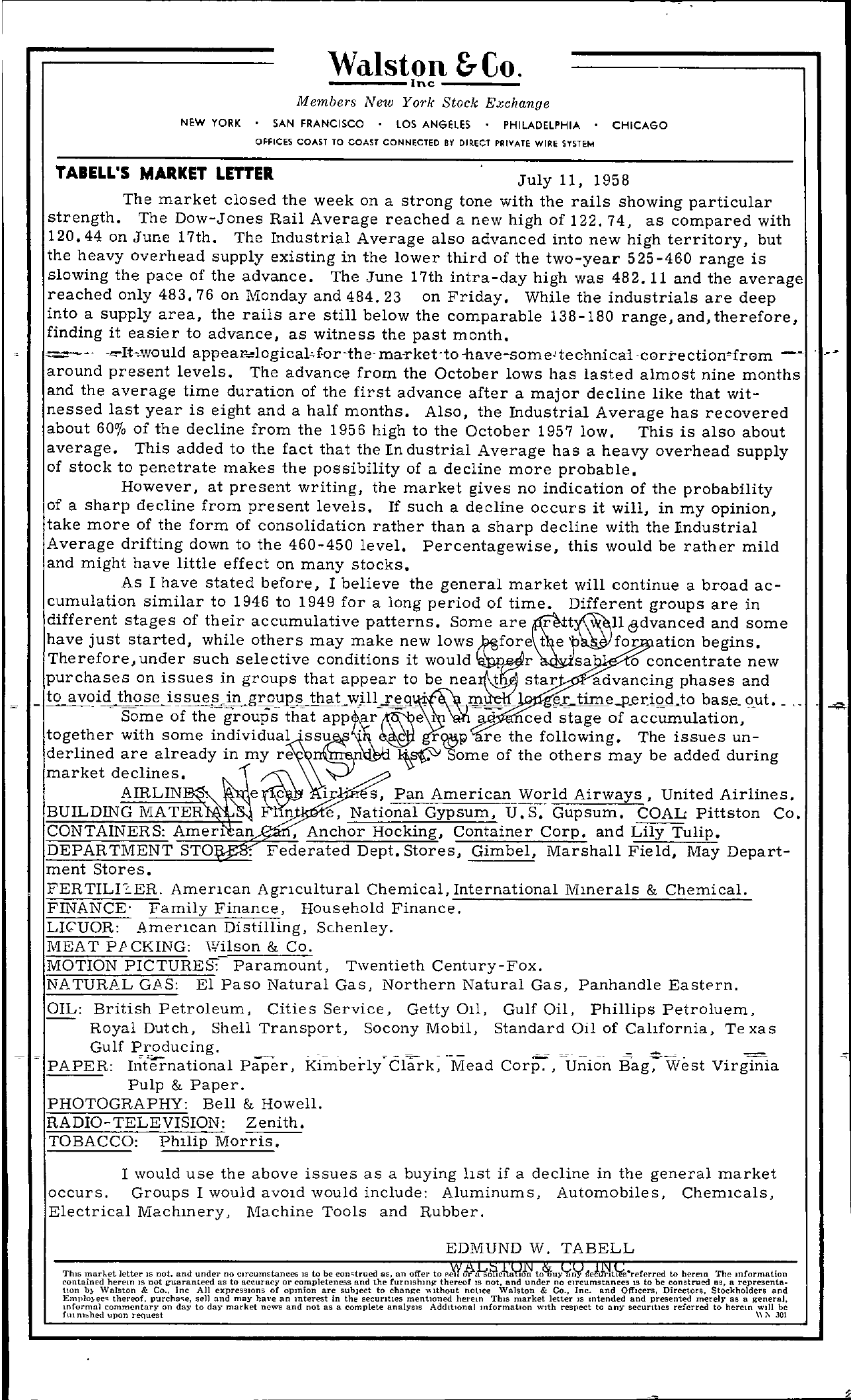 NEW YORK Walston &- Co. Inc Members New YOk Stock Exchange SAN FRANCISCO LOS ANGELES PHILADELPHIA OFFICES COAST TO COAST CONNECTED BY DIRECT PRIVATE WIRE SYSTEM CHICAGO TABELL'S MARKET LETTER July 11, 1958 The market closed the week on a strong tone with the rails showing particular strength. The Dow-Jones Rail Average reached a new high of 122. 74, as compared with 120.44 on June 17th. The Industrial Average also advanced into new high territory, but the heavy overhead supply existing in the lower third of the two-year 525-460 range is slowing the pace of the advance. The June 17th intra-day high was 482.11 and the average reached only 483.76 on Monday and 484. 23 on Friday. While the industrials are deep into a supply area, the rails are still below the comparable 138-180 range,and,therefore, finding it easier to advance, as witness the past month. –' . around present levels. The advance from the October lows has lasted almost nine months and the average time duration of the first advance after a major decline like that wit- nessed last year is eight and a half months. Also, the Industrial Average has recovered about 60'70 of the decline from the 1956 high to the October 1957 low. This is also about average. This added to the fact that the In dustrial Average has a heavy overhead supply of stock to penetrate makes the possibility of a decline more probable. However, at present writing, the market gives no indication of the probability of a sharp decline from present levels. If such a decline occurs it will, in my opinion, take more of the form of consolidation rather than a sharp decline with the Industrial Average drifting down to the 460-450 level. Percentagewise, this would be rather mild and might have little effect on many stocks. As I have stated before, I believe the general market will continue a broad ac- cumulation similar to 1946 to 1949 for a long period of time. Different groups are in different stages of their accumulative patterns. Some are edvanced and some have just started, while others may make new lows te ation begins. Therefore, under such selective conditions it would .sa 0 concentrate new purchases on issues in groups that appear to be nearNl1Ei star to avoid those issue.'U!l.-grouRs . mM advancing phases and bas.e. o,ut. ' .. , Some of the-g'roups that appar- – 'e I -7 ced stage of accumulation, derlined are already in my re ome of the others may be added during market declines. – e c i ' s, Pan American World Airways, United Airlines. BUILDING MATER m e, National Gypsum, Gupsum. COAll Pittston Co. CONTAINERS Amentan , Anchor Hocking, Container Corp. and Lily Tulip. DEPARTMENT Federated Dept. Stores, Gimbel, Marshall Field, May Depart- ment Stores. FERTILEER. Amencan Agncultural Chemical, International Mmerals & Chemical. FINANCE' Family Finance, Household Finance. LI;'UOR Amencan Distilling, Schenley. MEAT PPCKING Wilson & Co. MOTION PICTURES Paramount, Twentieth Century-Fox. NATURAL GAS El Paso Natural Gas, Northern Natural Gas, Panhandle Eastern. – -OIL British Petroleum, Cities Service, Getty 011, Gulf Oil, Phillips Petroluem, Royal Dutch, Shell Transport, Socony Mobil, Standard Oil of Calrfornia, Te xas Gulf Producing. . . PAPER Paper, Kimberly-Ciark -Mead Corp', -Union Bag7'West Virginia Pulp & Paper. PHOTOGRAPHY Bell & Howell. RADIO-TELEVISION Zenith. TOBACCO PhIlip Morris. I would use the above issues as a buying lrst if a decline in the general market occurs. Groups I would avoId would include Aluminums, Automobiles, ChemIcals, Electrical Machmery, Machine Tools and Rubber. EDMUND W. TABELL ThIS market letter 15 not, Ilnd under no CIrcumstances 15 to be contrued as, an offer to ,RYI to herem The mformation contained herem lS not guaranteed as to accuracy or completeness and the furnlshml'! thereor IS not. and under no Circumstances IS to be construed ae, a representa- tIOn b. Walston & Co.. Inc All expressions of opmion are subject to chan)!e Ithout notice 'Valston & Co., Inc. Bnd Officers, Dircctors, Stockholders and thereof. purchae, sell and may ha\'e an mterest in the securities mentlOnoo herem Thls market letter IS mtended and presented merely as a general, mfurrnal commentary on day to day market news and not as a complete analYSIS Addlt10nal mfOrmat10n WIth respect to any seCUritIes referred to herem wlll be f111 mhed upon request \\.. 301