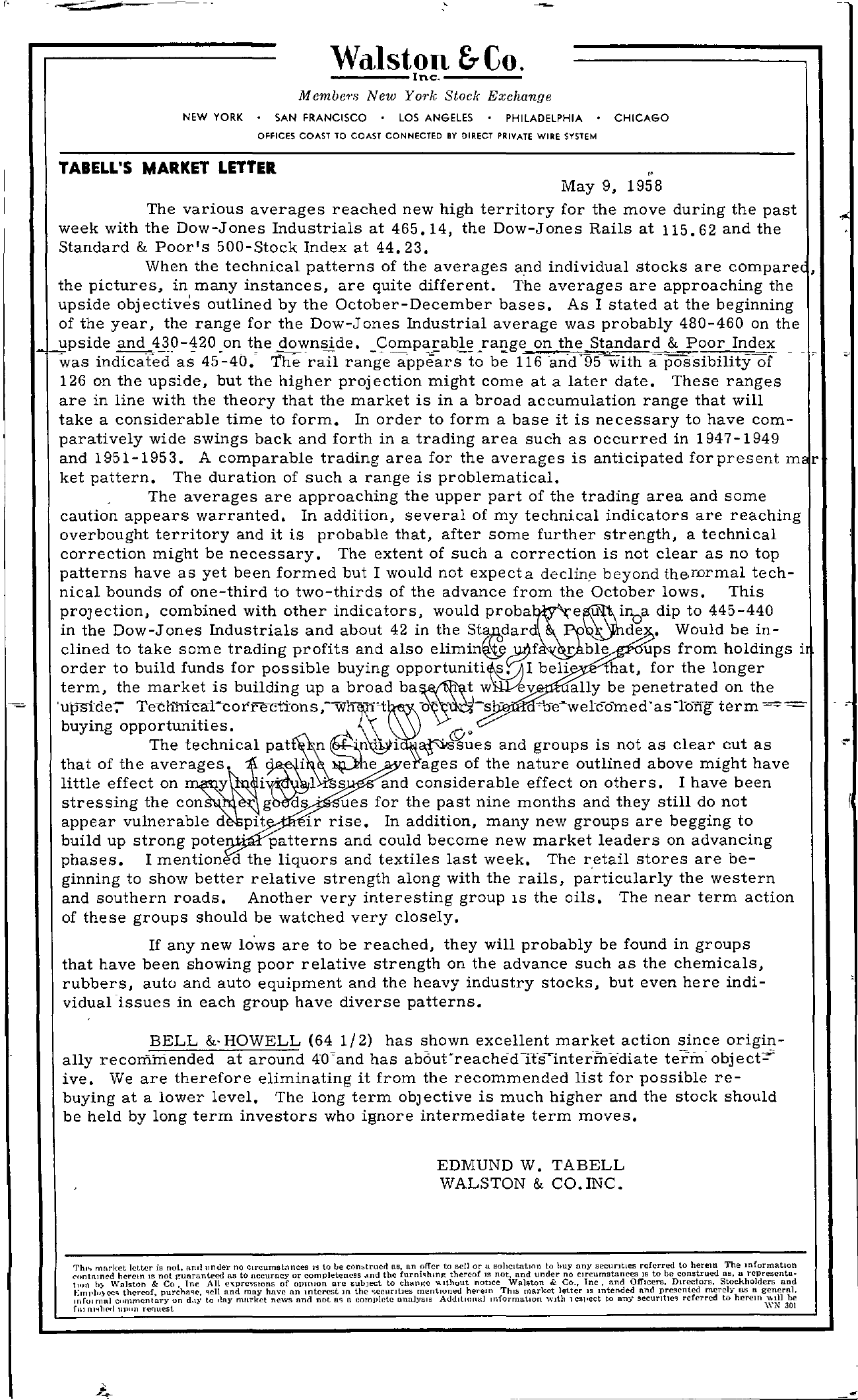 r .. .' Wdlston &Co. NEW YORK M embo1'S Now York Stock Exchange SAN FRANCISCO LOS ANGELES PHILADELPHIA OFFices COAST TO COAST CONNECTED BY DIRECT PRIVATE WIRE SYSTEM CHICAGO TABELL'S MARKET LETTER May 9, 1958 The various averages reached new high territory for the move during the past week with the Dow-Jones Industrials at 465.14, the Dow-Jones Rails at 115.62 and the Standard & Poor's 500-Stock Index at 44.23. When the technical patterns of the averages and individual stocks are comparee, the pictures, in many instances, are quite different. The averages are approaching the upside objectives outlined by the October-December bases. As I stated at the beginning of the year, the range for the Dow-Jones Industrial average was probably 480-460 on the 1 ,on t!Ie ()wnside. ra!!ge on t Standard & Poor Index was indicated as 45-40. The rail range appears to be 116 'and 95 with a possibility of 126 on the upside, but the higher projection might come at a later date. These ranges are in line with the theory that the market is in a broad accumulation range that will take a considerable time to form. In order to form a base it is necessary to have com- paratively wide swings back and forth in a trading area such as occurred in 1947-1949 and 1951-1953. A comparable trading area for the averages is anticipated for present mer ket pattern. The duration of such a range is problematical. The averages are approaching the upper part of the trading area and some caution appears warranted. In addition, several of my technical indicators are reaching overbought territory and it is probable that, after some further strength, a technical correction might be necessary. The extent of such a correction is not clear as no top patterns have as yet been formed but I would not expecta decline beyond themrmal tech- nical bounds of one-third to two-thirds of the advance from the October lows. This proJection, combined with other indicators, would dip to 445-440 in the Dow-Jones Industrials and about 42 in the Stmdard Would be in- clined to take some trading profits and also r ble ups from holdings i order to build funds for possible buying beli -that, for the longer term, the market is building up a broad ally be penetrated on the 'up'Stde7 ,-c' , term buying opportuniti es. cO 0 The technical pat n 'n i arwsues and groups is not as clear cut as … ;-' little effect on 1 . s and considerable effect on others. I have been stressing the con g as' ues for the past nine months and they still do not appear vulnerable d pit ir rise. In addition, many new groups are begging to build up strong pote patterns and could become new market leaders on advancing phases. I mention d the liquors and textiles last week. The retail stores are be- ginning to show better relative strength along with the rails, particularly the western and southern roads. Another very interesting group IS the oils. The near term action of these groups should be watched very closely. If any new lows are to be reached, they will probably be found in groups that have been showing poor relative strength on the advance such as the chemicals, rubbers, auto and auto equipment and the heavy industry stocks, but even here individual'issues in each group have diverse patterns. BELL &. HOWELL (64 1/2) has shown excellent market action since originally recommended at around 4'Oand has abiiut'reached-ifs-interme'diate term object ive. We are therefore eliminating it from the recommended list for possible rebuying at a lower level. The long term objective is much higher and the stock should be held by long term investors who ignore intermediate term moves. EDMUND W. TABELL WALSTON & CO. INC. Thl' nlarket lctwr is nol anrl under no Clrcumstnnces 10; to loe cOnl,trucri !l.S, an offer to sell or u aohCltatlon to Iouy flny securities referred to herem The mformatlon ('ontnmed herein IS not as to accuracy or completeness dod the thereof IS not, and under no circumstances IS to be construed as, a Tcpresenta. iwn b) \\'alston & Co, Inc All e'lpre'5SlonS of OPimon are subJect to change ..,thout notice Walston & Co., Inc, and Officers, Directors, Stockholders and mr1 mnl thereof, cllmmentary on d,l), to and may have an mterest m ,lay market news and not a' a the ecuntles mentIOned herein ThiS complete analYSIS AdditIOnal mform market letter 15 I atlon WIth 1CSI'ect ntended to any and sccu presented merely IlS ntle, referred to her enmgen.Je!rable, fUI lIP'OlI rel')uest \\ N 301