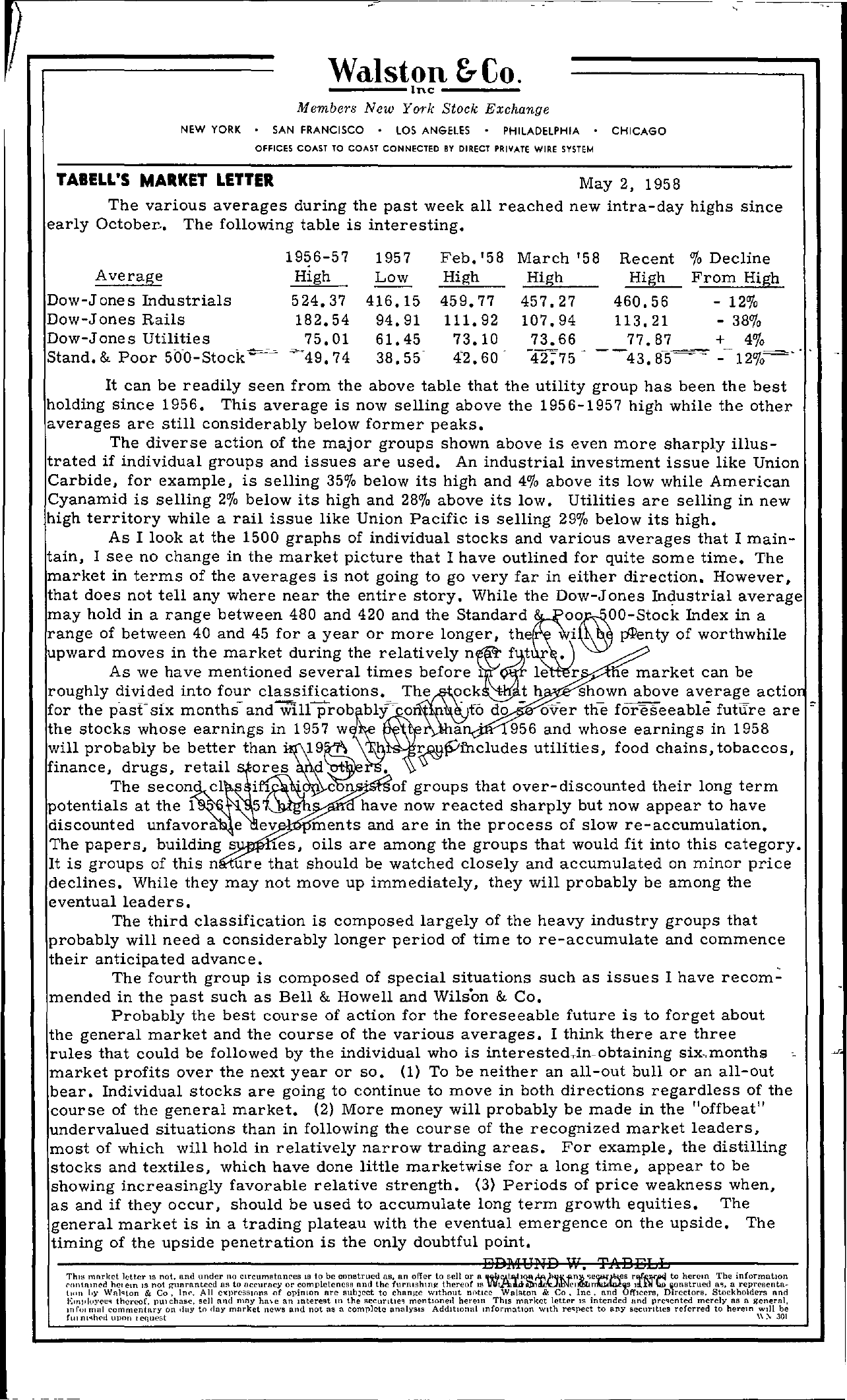 NEW YORK Walston &Co. —–inc —– Members New York Stock Exchange SAN FRANCISCO LOS ANGELES PHILADELPHIA OFFICES COAST TO COAST CONNECTED BY DIRECT PRIVATE WIRE SYSTEM CHICAGO TABELL'S MARKET LETTER May 2, 1958 The various averages during the past week all reached new intra-day highs since early October,. The following table is interesting. Average Dow-J one s Industrials Dow-Jones Rails Dow-Jones Utilities Stand. & Poor 500-Stock 1956-57 Hi/ilh 524.37 182.54 75.01 49.74 1957 Low 416.15 94.91 61. 45 38.55 Feb. '58 High 459.77 111. 92 73.10 40 2.60 March '58 Recent High High 457.27 460.56 107.94 113.21 73.66 77.87 -42;75 '–43.85 0/0 Decline From High – 120/0 – 380/0 40/0 120/0 – It can be readily seen from the above table that the utility group has been the best holding since 1956. This average is now selling above the 1956-1957 high while the other averages are still considerably below former peaks. The diverse action of the major groups shown above is even more sharply illustrated if individual groups and issues are used. An industrial investment issue like Union Carbide, for example, is selling 350/0 below its high and 40/0 above its low while American Cyanamid is selling 20/0 below its high and 280/0 above its low. Utilities are selling in new high territory while a rail issue like Union Pacific is selling 29/0 below its high. As I look at the 1500 graphs of individual stocks and various averages that I main- tain, I see no change in the market picture that I have outlined for quite some time. The market in terms of the averages is not going to go very far in either direction. However, that does not tell any where near the entire story. While the Dow-Jones Industrial average may hold in a range between 480 and 420 and the range of between 40 and 45 for a year or more longer, the Index in a ppenty of worthwhile upward moves in the market during the relatively nat As we have mentioned several times before 1 Ie r e market can be roughly divided into fo,r for the past- six months and wIll the stocks whose earnings in 1957 w h above actio fo do over the foreseeable future are a ' 956 and whose earnings in 1958 will probably be better finance, drugs, retail ores d utilities, food chains, tobaccos, The secon cl . of groups that over-discounted their long term potentials at the 1 have now reacted sharply but now appear to have discounted unfavora ments and are in the process of slow re-accumulation. The papers, building s 1es, oils are among the groups that would fit into this category. It is groups of this n ure that should be watched closely and accumulated on minor price declines. While they may not move up immediately, they will probably be among the eventual leaders. The third classification is composed largely of the heavy industry groups that probably will need a considerably longer period of time to re-accumulate and commence their anticipated advance. The fourth group is composed of special situations such as issues I have recom mended in the past such as Bell & Howell and Wils'on & Co. Probably the best course of action for the foreseeable future is to forget about the general market and the course of the various averages. I think there are three rules that could be followed by the individual who is interestedTin-obtaining six.,months market profits over the next year or so. (1) To be neither an all-out bull or an all-out bear. Individual stocks are going to continue to move in both directions regardless of the course of the general market. (2) More money will probably be made in the offbeat undervalued situations than in following the course of the recognized market leaders, most of which will hold in relatively narrow trading areas. For example, the distilling stocks and textiles, which have done little marketwise for a long time, appear to be showing increasingly favorable relative strength. (3) Periods of price weakness when, as and if they occur, should be used to accumulate long term growth equities. The general market is in a trading plateau with the eventual emergence on the upside. The timing of the upside penetration is the only doubtful pOint. 'f'1'iBBLL Thill market letter IS not, and under no Clrcumstnnces IS to be construed as, an offer to sell or a ('untamed hel em lS not guarllnlccd tiS to lIccurncy or completeness nnd the furnlshmj! thereof IS rQf'1,Ijl',.eq to herem The informatIOn Id..UiI 'w Itonstrued a representn. ll'u l,y Wallon & Co. rH'. All expreSSions of opinion are subJcct to chan).!e Without notice WnlSton & Co, Inc. and Officers, Directors, Stockholders and thereof, pUlchasc, sell nnd mny ha\c an Interest In the mentIOned herem Th,s market Ictter IS intended lind preqentcd merely as a genernl, InfO! mnl commentary on dilY to day mllrket news and not as a complete nnnlysis Addltionlll mformntlon With Te;pect to any Securltle9 referred to herem Will be fill nih,,j upon I equest \\.. 301