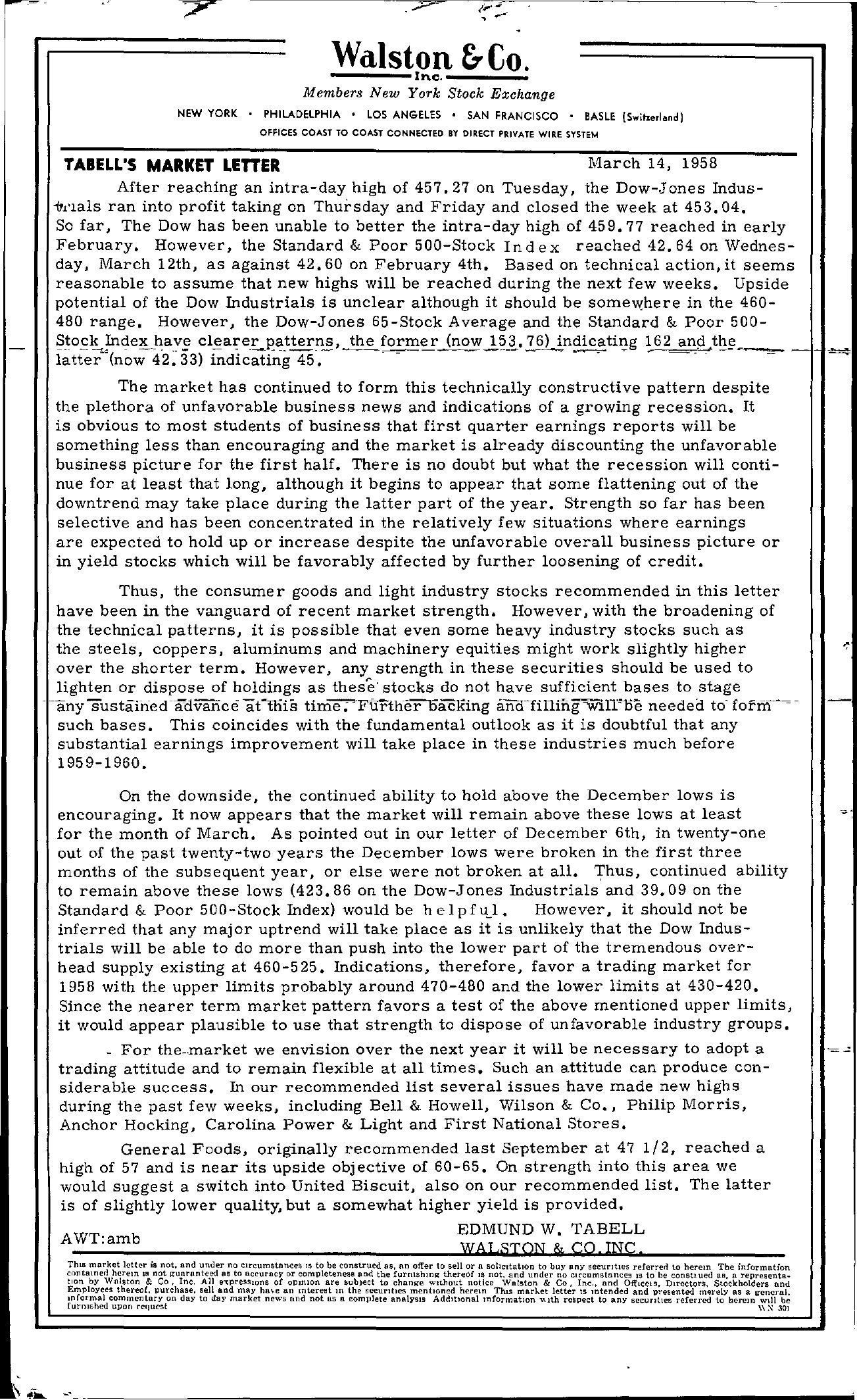 Walston &eo.–….;…;,..;;In.c. – Members New York Stock Exchange NEW YORK PHILADELPHIA LOS ANGELES SAN FRANCISCO BASLE (Switzerl,nd) OFFICES COAST TO COAST CONNECTED BY DIRECT PRIVATE WIRE SYSTEM TABELL'S MARKET LETTER March 14, 1958 After reaching an intra-day high of 457.27 on Tuesday, the Dow-J ones Indus- 111'lals ran into profit taking on Thursday and Friday and closed the week at 453.04. So far, The Dow has been unable to better the intra-day high of 459.77 reached in early February. However, the Standard & Poor 500-Stock Index reached 42.64 on Wednes- day, March 12th, as against 42.60 on February 4th. Based on technical action,it seems reasonable to assume that new highs will be reached during the next few weeks. Upside potential of the Dow Industrials is unclear although it should be somewhere in the 460- 480 range. However, the Dow-Jones 65-Stock Average and the Standard & Poor 500- latter-(now 42.33) indicating 45. .- . l.l..ipicatirg 162 – . .. – The market has continued to form this technically constructive pattern despite the plethora of unfavorable business news and indications of a growing recession. It is obvious to most students of business that first quarter earnings reports will be something less than encouraging and the market is already discounting the unfavorable business picture for the first half. There is no doubt but what the recession will continue for at least that long, although it begins to appear that some flattening out of the downtrend may take place during the latter part of the year. Strength so far has been selective and has been concentrated in the relatively few situations where earnings are expected to hold up or increase despite the unfavorable overall business picture or in yield stocks which will be favorably affected by further loosening of credit. Thus, the consumer goods and light industry stocks recommended in this letter have been in the vanguard of recent market strength. However, with the broadening of the technical patterns, it is possible that even some heavy industry stocks such as the steels, coppers, aluminums and machinery equities might work slightly higher over the shorter term. However, any strength in these securities should be used to lighten or dispose of holdings as thes'e' stocks do not have sufficient bases to stage .-anysustaihed-a'dVarice af'tliis time; 'Further oacKing ana-fil1ing-willDe needed to' such bases. This coincides with the fundamental outlook as it is doubtful that any substantial earnings improvement will take place in these industries much before 1959-1960. On the downside, the continued ability to hold above the December lows is encouraging. It now appears that the market will remain above these lows at least for the month of March. As pointed out in our letter of December 6th, in twenty-one out of the past twenty-two years the December lows were broken in the first three months of the subsequent year, or else were not broken at all. Thus, continued ability to remain above these lows (423.86 on the Dow-Jones Industrials and 39.09 on the Standard & Poor 500-Stock Index) would be he I p f q). However, it should not be inferred that any major uptrend will take place as it is unlikely that the Dow Industrials will be able to do more than push into the lower part of the tremendous overhead supply existing at 460-525. Indications, therefore, favor a trading market for 1958 with the upper limits probably around 470-480 and the lower limits at 430-420. Since the nearer term market pattern favors a test of the above mentioned upper limits, it would appear plausible to use that strength to dispose of unfavorable industry groups. For the..market we envision over the next year it will be necessary to adopt a trading attitude and to remain flexible at all times. Such an attitude can produce considerable success. In our recommended list several issues have made new highs during the past few weeks, including Bell & Howell, Wilson & Co., Philip Morris, Anchor Hocking, Carolina Power & Light and First National Stores. General Foods, originally recommended last September at 47 1/2, reached a high of 57 and is near its upside objective of 60-65. On strength into this area we would suggest a switch into United Biscuit, also on our recommended list. The latter is of slightly lower quality, but a somewhat higher yield is provided. AWTamb EDMUND W. TABELL WAJtSTON & CO,INe, ThiS market letter is not. nnd under no circumstances IS to be construed as, nn offer to sell Of n soliCitatIOn to buy any seCUrities referrerl to herem The information con tamer! herem 19 not guarnnteed as to accurncy or completenC!!s nnd the furnish 109 thereOf IS not, and under no Clrcumstanccs IS to be constl ued as, n represcntll t!on by Walston & Co, Inc. All c,,presslons of oPlnlon Ilre subject to change WIthout notice Walston & Co, Inc.. nnd Offlcets, Directors, Stockholders nnd Employees thereof, purchase, sell and may an lOterest m the securities mentIOned herem ThiS market letter IS mtended and presented merely as a general. Informal commentary on day to day market news and not as a complete analYSIS Additional mformabon '\'lth respect to any securities referred to herem Will be fU\'nlshed upon retlucst \\)\ 301