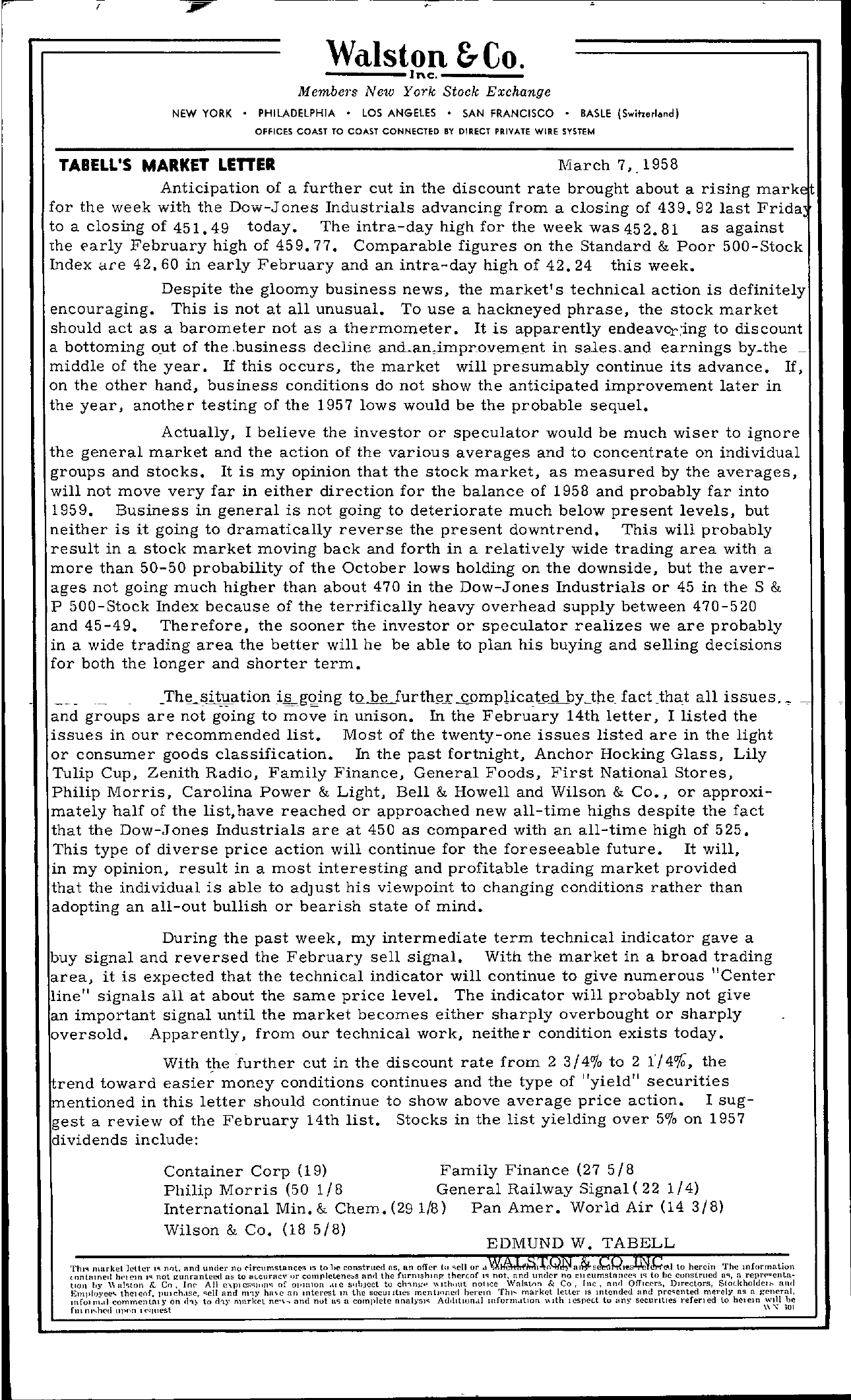 – r Walston &- Co. – – – – I n c . – – Membe1's New York Stock Exchange NEW YORK PHILADELPHIA LOS ANGELES SAN FRANCISCO BASLE (SwH,I.,d) OFfiCES COAST TO COAST CONNECTED BY DIRECT PRIVATE WIRE SYSTEM TABELL'S MARKET LEnER March 7,.1958 Anticipation of a further cut in the discount rate brought about a rising marke for the week with the Dow-Jones Industrials advancing from a closing of 439.92 last Frida. to a closing of 451. 49 today. The intra-day high for the week was 452.81 as against the 'arly February high of 459.77. Comparable figures on the Standard & Poor 500-Stock Index ace 42.60 in early February and an intra-day high of 42.24 this week. Despite the gloomy business news, the market's technical action is definitely encouraging. This is not at all unusual. To use a hackneyed phrase, the stock market should act as a barometer not as a thermometer. It is apparently endeavering to discount a bottoming o,ut of the .business decline in sales.and earnings bythe middle of the year. If this occurs, the market will presumably continue its advance. If, on the other hand, business conditions do not show the anticipated improvement later in the year, another testing of the 1957 lows would be the probable sequel. Actually, I believe the investor or speculator would be much wiser to ignore the general market and the action of the various averages and to concentrate on individual groups and stocks. It is my opinion that the stock market, as measured by the averages, will not move very far in either direction for the balance of 1958 and probably far into 1959. Business in general is not going to deteriorate much below present levels, but neither is it going to dramatically reverse the present downtrend. This will probably result in a stock market moving back and forth in a relatively wide trading area with a more than 50-50 probability of the October lows holding on the downside, but the averages not going much higher than about 470 in the Dow-Jones Industrials or 45 in the S & P 500-Stock Index because of the terrifically heavy overhead supply between 470-520 and 45-49. Therefore, the sooner the investor or speculator realizes we are probably in a wide trading area the better will he be able to plan his buying and selling decisions for both the longer and shorter term. tQ be complicat.e1L1Jythe fact .that all issues. and groups are not going to move in unison. In the February 14th letter, I listed the issues in our recommended list. Most of the twenty-one issues listed are in the light or consumer goods classification. In the past fortnight, Anchor Hocking Glass, Lily Tulip Cup, Zenith Radio, Family Finance, General Foods, First National Stores, Philip Morris, Carolina Power & Light, Bell & Howell and Wilson & Co., or approxi- mately half of the list,have reached or approached newall-time highs despite the fact that the Dow-Jones Industrials are at 450 as compared with an all-time high of 525. This type of diverse price action will continue for the foreseeable future. It will, in my opinion, result in a most interesting and profitable trading market provided that the individual is able to adjust his viewpoint to changing conditions rather than adopting an all-out bullish or bearish state of mind. During the past week, my intermediate term technical indicator gave a buy signal and reversed the February sell signal. With the market in a broad trading area, it is expected that the technical indicator will continue to give numerous Center line signals all at about the same price level. The indicator will probably not give an important signal until the market becomes either sharply overbought or sharply oversold. Apparently, from our technical work, neithe r condition exists today. With the further cut in the discount rate from 2 3/4/0 to 2 the rend toward easie; money conditions continues and the type of yield securities irnentioned in this letter should continue to show above average price action. I sug- gest a review of the February 14th list. Stocks in the list yielding over 5 on 1957 dividends include Container Corp (19) Family Finance (27 5/8 Philip Morris (50 1/8 General Railway Signal (22 1/4) International Min. & Chem. (29 1/8) Pan Amer. World Air (14 3/8) Wilson & Co. (185/8) EDMUND W. TABELL Thl'l market letter ; not. lind tmder no drcllmstanc('S IS to he construed as, un offer t ell or ,I to herein The mformation tnnllllne'! h,'lcm 1'1 not gunrantl!cd as to 11LCUrlIC\' r complct.ene.s lind the furnishing thcr(of not, and under no cl1cumstnncc'l 1; to be cunstrued 3'1, Il rellrl'cnla- 11011 \'Y \'III'lton &. Co, Inr All e\.pICS'lIn'l of OlIIlon .IlC sllhJcct to chmg.. \\Ithut nollcc '\'nlston & Co, Inc, nnd OffIcers, DIrectors, Slo(.khoJdclh nnd Eml,loycc thClcof. Illllch,lse, ell and mlY hll\c ao Intereslln the sCClllltles mentlone,l hereIn 'fhl' market lettcr IS 1Il1cnded lind prC'\cnted merely liS a general, mfollll.t1 eommcntru' on 10 (hy market ne and nut 1I'l It complete nnalysl'l Ad,litlUllJ.lwfornl.ltlon \\lth lCSpec.t to IIny 5eCUrities referlecllo helelll wl!1 be fll1 n I…hed U1'..-.n I ('quest \\ '\ 101