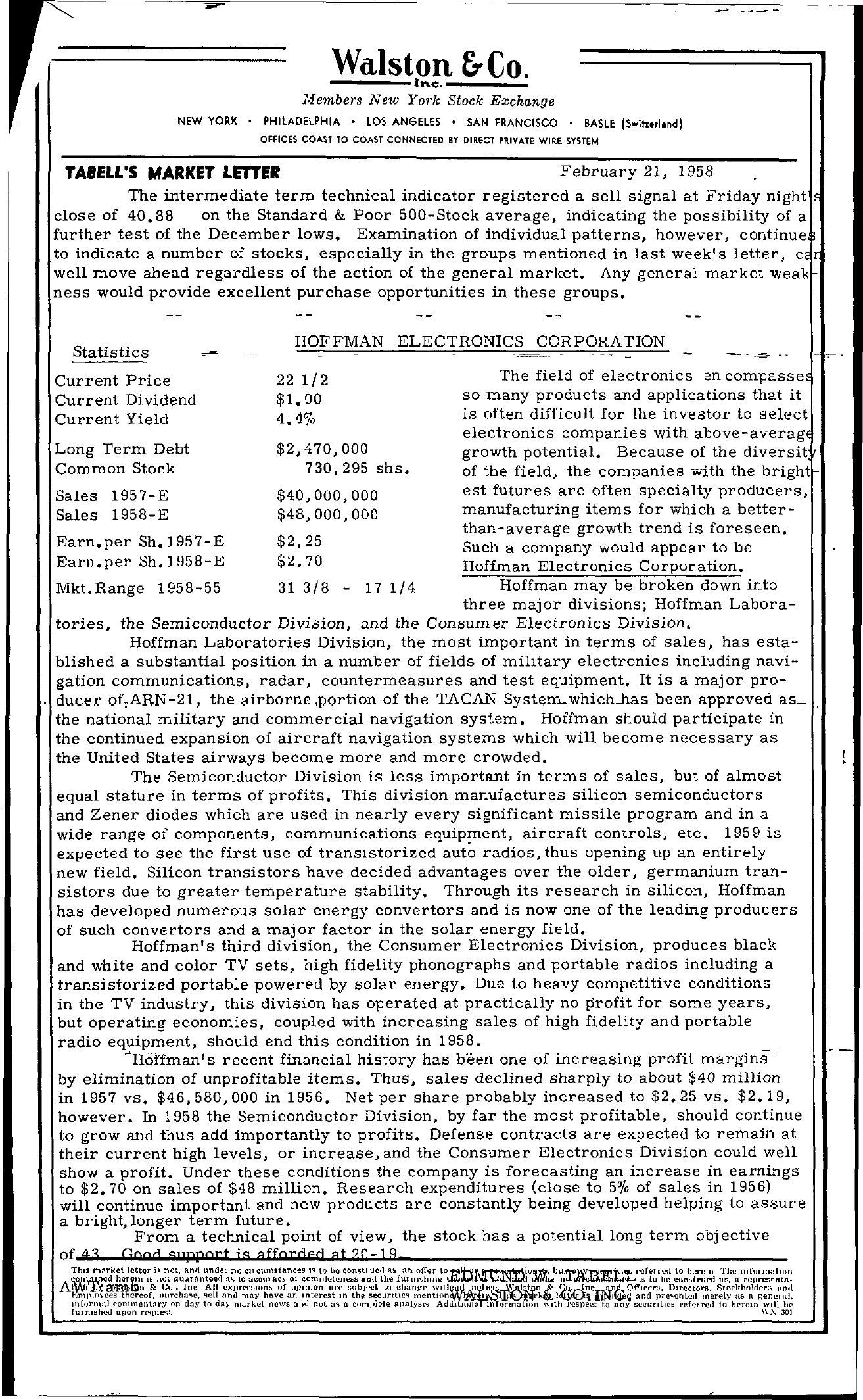 — – – Wdlston &Co.—–lnc. Members New York Stock EXchange NEW YORK PHILADELPHIA LOS ANGELES SAN FRANCISCO BASLE (Switml d) OFFICES COAST TO COAST CONNECTED BY DIRECT PRIVATE WIRE SYSTEM TABELL'S MARKET LETTER February 21, 1958 The intermediate term technical indicator registered a sell signal at Friday night close of 40.88 on the Standard & Poor 500-Stock average, indicating the possibility of a further test of the December lows. Examination of individual patterns, however, continue to indicate a number of stocks, especially in the groups mentioned in last week's letter, c well move ahead regardless of the action of the general market. Any general market weal ness would provide excellent purchase opportunities in these groups. Statistics HOFFMAN ELECTRONICS CORPORATION Current Price Current Dividend Current Yield Long Term Debt Common Stock 22 1/2 1.00 4.40/0 2,470,000 730,295 shs. The field of electronics en compasse1 so many products and applications that it is often difficult for the investor to select electronics companies with above-averagl growth potential. Because of the diversit of the field, the companies with the bright Sales 1957-E Sales 1958-E Earn.per Sh.1957-E Earn.per Sh.1958-E 40,000,000 48,000,000 2.25 2.70 est futures are often specialty producers, manufacturing items for which a betterthan-average growth trend is foreseen. Such a company would appear to be Hoffman Electronics Corporation. Mkt.Range 1958-55 313/8 – 171/4 Hoffman may be broken down into three major divisions; Hoffman Labora- tories, the Semiconductor Division, and the Consumer Electronics Division. Hoffman Laboratories Division, the most important in terms of sales, has esta- blished a substantial position in a number of fields of milltary electronics including navi- gation communications, radar, countermeasures and test equipment. It is a major pro- ducer oLARN-21, theairborne ,portion of the TACAN been approved the national military and commercial navigation system. Hoffman should participate in the continued expansion of aircraft navigation systems which will become necessary as the United States airways become more and more crowded. The Semiconductor Division is less important in terms of sales, but of almost equal stature in terms of profits. This division manufactures silicon semiconductors and Zener diodes which are used in nearly every significant missile program and in a wide range of components, communications equip;uent, aircraft controls, etc. 1959 is expected to see the first use of transistorized auto radios, thus opening up an entirely new field. Silicon transistors have decided advantages over the older, germanium tran- sistors due to greater temperature stability. Through its research in silicon, Hoffman has developed numerous solar energy convertors and is now one of the leading producers of such convertors and a major factor in the solar energy field. Hoffman's third division, the Consumer Electronics Division, produces black and white and color TV sets, high fidelity phonographs and portable radios including a transistorized portable powered by solar energy. Due to heavy competitive conditions in the TV industry, this division has operated at practically no profit for some years, but operating economies, coupled with increasing sales of high fidelity and portable radio equipment, should end this condition in 1958. -Hoi'fman's recent financial history has been one of increasing profit margins— by elimination of unprofitable items. Thus, sales declined sharply to about 40 million in 1957 vs. 46,580,000 in 1956. Net per share probably increased to 2.25 vs. 2.19, however. In 1958 the Semiconductor Division, by far the most profitable, should continue to grow and thus add importantly to profits. Defense contracts are expected to remain at their current high levels, or increase, and the Consumer Electronics Division could well show a profit. Under these conditions the company is forecasting an increase in earnings to 2.70 on sales of 48 million. Research expenditures (close to 50/0 of sales in 1956) will continue important and new products are constantly being developed helping to assure a bright, longer term future. From a technical point of view, the stock has a potential long term obj ective of 43 Good support is afforded at 2Q- 1 9 ThLS mnrket letter jq not, and undet no ClICllmstances 19 to he con-;ttucrl 11,& lin offer b\!b'rIl\Yntrt1fitlql rcfertcd to herelll The lIlformntlon At!'!Cd is not gUdrnntee(\ n; to 01 completeness and the 1 )t 3ynfl-19n &. Co, Inc All expressIons of oPInion arc subJC'Ct to ehunge Wlt'wl,j ,mp )urchu'lC, '1ell lnd may have an Interest III the securltHq mentlOnWih I JiMo,r to be eon…trued as, a represcnln t;Q,.,….,!ney….'l;i. Officers, DIrectors, Stockholders IIn.\ nnd merely liS 1\ genel ai, IlIr'Jrrnnl l'ommentnry nn day tn m,lrkct news and not nq n cml,('te RnuiysI AddltJonu mformatlon \\Ith respect to IIny SeCLlrltles referred to hereIn WIll he fUI filshcd upon retuCt \\;.. 301 ,I