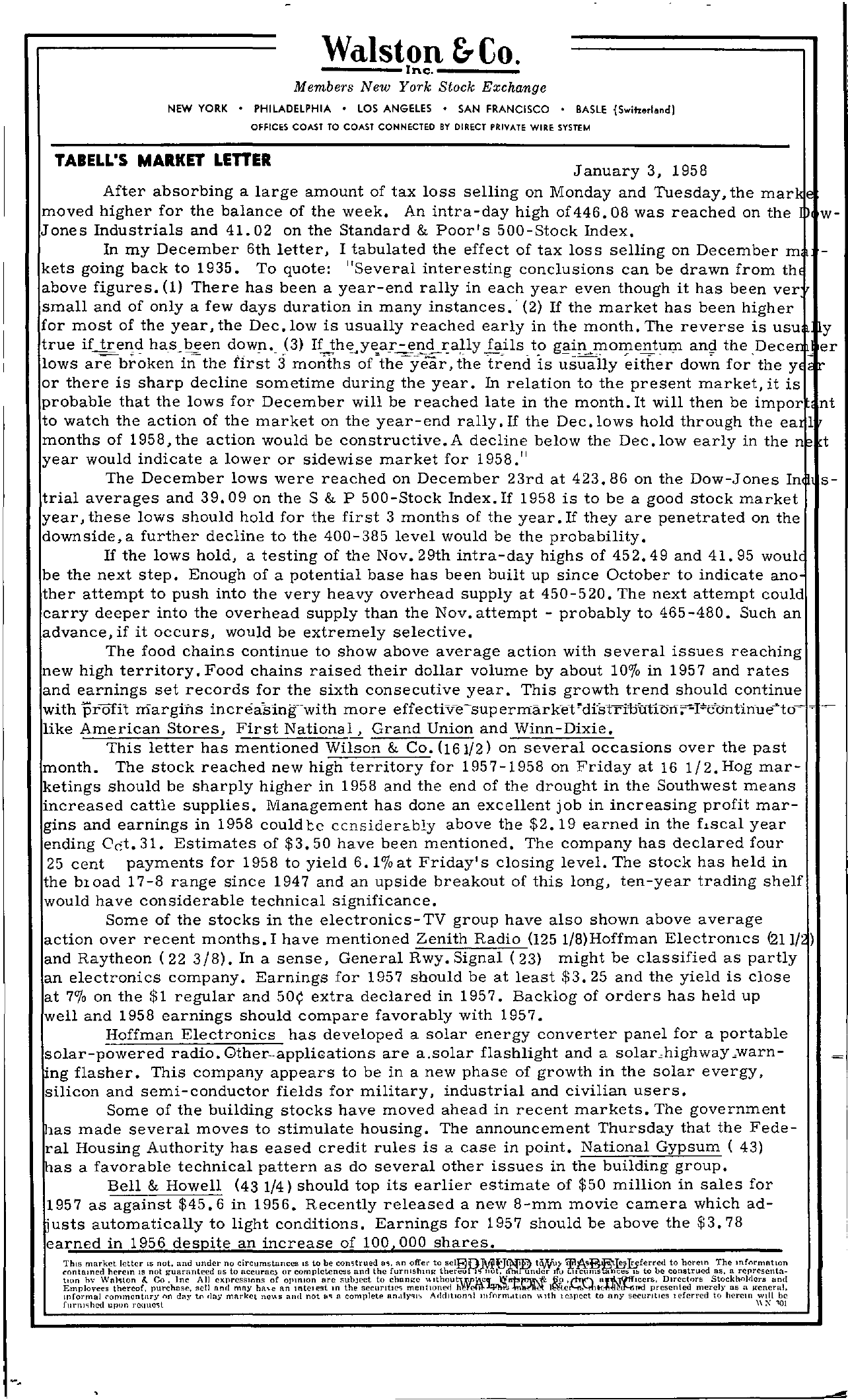 Walston &Co.——–Inc. Members New York Stock Exchange NEW YORK PHILADELPHIA LOS ANGELES SAN FRANCISCO BASLE SwHmld) OFFICES COAST TO COAST CONNECTED BY DIRECT PRIVATE WIRE SYSTEM TABELL'S MARKET LETTER January 3, 1958 After absorbing a large amount of tax loss selling on Monday and Tuesday, the mark moved higher for the balance of the week. An intra-day high of446.08 was reached on the wJones Industrials and 41.02 on the Standard & Poor's 500-Stock Index. In my December 6th letter, I tabulated the effect of tax loss selling on December m kets going back to 1935. To quote Several interesting conclusions can be drawn from thE above figures. (1) There has been a year-end rally in each year even though it has been ver small and of only a few days duration in many instances.' (2) If the market has been higher for most of the year, the Dec. low is usually reached early in the month. The reverse is usu y true if tr'eqd down ..(3) faps t an the Decen er lows are broken in the fi.rst 3 months of the year, the trend is usually either down for the yE r or there is sharp decline sometime during the year. In relation to the present market, it is probable that the lows for December will be reached late in the month. It will then be impor nt to watch the action of the market on the year-end rally. If the Dec.lows hold through the ea 1 months of 1958, the action would be constructive. A decline below the Dec low early in the n t year would indicate a lower or sidewise market for 1958. The December lows were reached on December 23rd at 423.86 on the Dow-Jones In s- trial averages and 39.09 on the S & P 500-Stock Index. If 1958 is to be a good stock market year, these lows should hold for the first 3 months of the year. If they are penetrated on the downside, a further decline to the 400-385 level would be the probability. If the lows hold, a testing of the Nov. 29th intra-day highs of 452.49 and 41. 95 woul be the next step. Enough of a potential base has been built up since October to indicate ano ther attempt to push into the very heavy overhead supply at 450-520. The next attempt could carry deeper into the overhead supply than the Nov. attempt – probably to 465-480. Such an advance, if it occurs, would be extremely selective. The food chains continue to show above average action with several issues reaching new high territory. Food chains raised their dollar volume by about 100/0 in 1957 and rates and earnings set records for the sixth consecutive year. This growth trend should continue with profit margins increasinjCwith more – like American Stores, First National, Grand Union and Winn-Dixie. This letter has mentioned Wilson & Co. (161/2) on several occasions over the past month. The stock reached new high territory for 1957-1958 on Friday at 16 1/2.Hog mar- ketings should be sharply higher in 1958 and the end of the drought in the Southwest means increased cattle supplies. Management has done an excellent job in increasing profit mar- gins and earnings in 1958 couldtc ccnsiden.bly above the 2.19 earned in the f.sca1 year ending Oc;t. 31. Estimates of 3.50 have been mentioned. The company has declared four 25 cent payments for 1958 to yield 6. 10/0 at Friday's closing level. The stock has held in the broad 17-8 range since 1947 and an upside breakout of this long, ten-year trading shelf would have considerable technical significance. Some of the stocks in the electronics-TV group have also shown above average action over recent months. I have mentioned Zenith Radio (125 1/8)Hoffman Electromcs 1211/' ) and Raytheon (22 3/8). In a sense, General Rwy. Signal (23) might be classified as partly an electronics company. Earnings for 1957 should be at least 3.25 and the yield is close at 70/0 on the 1 regular and 50 extra declared in 1957. Backlog of orders has held up well and 1958 earnings should compare favorably with 1957. Hoffman Electronics has developed a solar energy converter panel for a portable solar-powered radio. Gther–appliGations are a.solar flashlight and a solaLhighwaywarn- flasher. This company appears to be in a new phase of growth in the solar evergy, silicon and semi-conductor fields for military, industrial and civilian users. Some of the building stocks have moved ahead in recent markets. The government las made several moves to stimulate housing. The announcement Thursday that the Fede- ral Housing Authority has eased credit rules is a case in point. National Gypsum ( 43) has a favorable technical pattern as do several other issues in the building group. Bell & Howell (43 1/4) should top its earlier estimate of 50 million in sales for 1957 as against 45.6 in 1956. Recently released a new 8-mm movie camera which ad- 'usts automatically to light conditions. Earnings for 1957 should be above the 3.78 earned in 1956 despite an increase of 100,000 shares. Thl! market letter 15 not, and under no circumstances IS to be con5trued n;, an offer to sel,Bnn.filtTfMilii\ 'lj!lJ;BiRtJ5;bferred to hereIn The mformatlOn contained herem IS not guaranteed HS to nccuraCl or completeness nnd the furn IShlng thereoH.flitH, dh1ttlntler rto LI I cumsfii'rice lb to he construed as, a representn- tlOn hv Wal;ton &, Co, Inc All eXpreSSIons of OPInIOn are subject to Wrrtlto\1;\t; uft,QfflcetS, Directors Stockholders and Emplovees thereof. purchase, sell anr! mny an Intel est In the securltlCs mentioned presented merely as a J.tenerul, Informal l'ommcntnry on day to day market nc\\s alld not Il'l a complete andlyql' A(ldltIOn-tI mfflrm.ltLOn \qth IC3PCCt to any seCUrltlcs leferrcd to herem will bc fUrnlhc1i UpLln relllC'lt \\- 101 -.