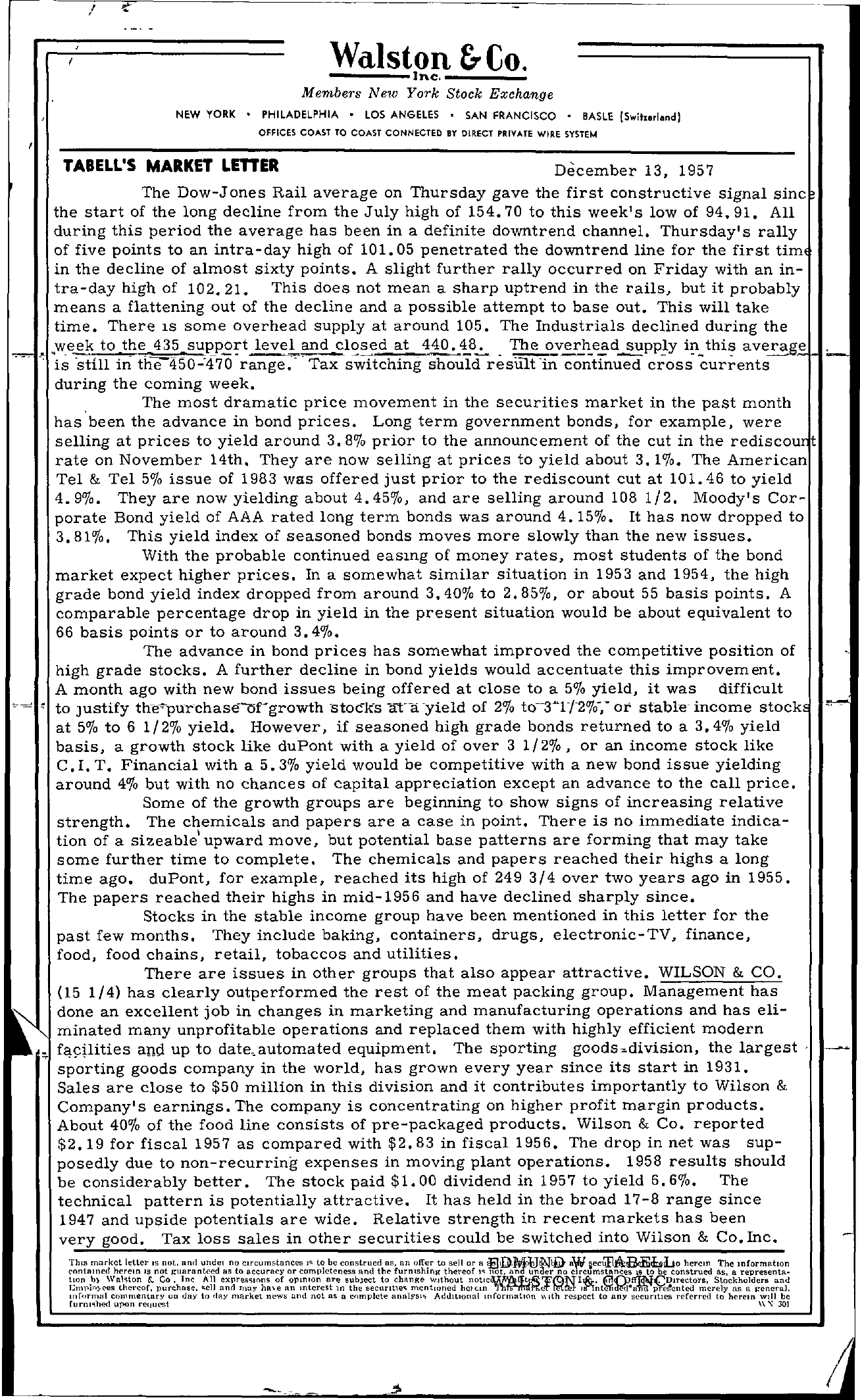 ,- Walston &- Co. Inc. Members New York Stock Exchange NEW YORK PHILADELPHIA LOS ANGELES SAN FRANCISCO BASLE Sw;he,landl OFFICES COAST TO COAST CONNECTED BY DIRECT PRIVATE WIRE SYSTEM I TABELL'S MARKET LETTER December 13, 1957 The Dow-Jones Rail average on Thursday gave the first constructive signal sinc the start of the long decline from the July high of 154.70 to this week's low of 94.91. All during this period the average has been in a definite downtrend channel. Thursday's rally of five points to an intra-day high of 101.05 penetrated the downtrend line for the first in the decline of almost sixty points. A slight further rally occurred on Friday with an in- tra-day high of 102.21. This does not mean a sharp uptrend in the rails, but it probably means a flattening out of the decline and a possible attempt to base out. This will take time. There IS some overhead supply at around 105. The Industrials declined during the week to the 435 support level and closed at 440.48. The overhead supply in this average 'is in 7ntinU'ed crosscurrents '- during the coming week. The most dramatic price movement in the securities market in the past month has been the advance in bond prices. Long term government bonds, for example, were selling at prices to yield around 3.8 prior to the announcement of the cut in the rediscollrlt rate on November 14th. They are now selling at prices to yield about 3.1. The American Tel & Tel 5 issue of 1983 was offered just prior to the rediscount cut at 101.46 to yield 4.9. They are now yielding about 4.45, and are selling around 1081/2. Moody's Cor- porate Bond yield of AAA rated long term bonds was around 4.15. It has now dropped to 3.81. This yield index of seasoned bonds moves more slowly than the new issues. With the probable continued easmg of money rates, most students of the bond market expect higher prices. In a somewhat similar situation in 1953 and 1954, the high grade bond yield index dropped from around 3.40 to 2.85, or about 55 basis points. A comparable percentage drop in yield in the present situation would be about equivalent to 66 basis pOints or to around 3.4. The advance in bond prices has somewhat improved the competitive position of high grade stocks. A further decline in bond yields would accentuate this improvement. A month ago with new bond issues being offered at close to a 5 yield, it was difficult to Justify theO'purchaseof-growth stocks arayield of 2 to–3-1-;-2,- or stable income st'Clc'ks ,',-,. at 5 to 6 1/2 yield. However, if seasoned high grade bonds returned to a 3.4 yield basis, a growth stock like duPont with a yield of over 3 1/2, or an income stock like C.1. T. Financial with a 5.3 yield would be competitive with a new bond issue yielding around 4 but with no chances of capital appreciation except an advance to the call price. Some of the growth groups are beginning to show signs of increasing relative strength. The chemicals and papers are a case in point. There is no immediate indica- tion of a sizeable' upward move, but potential base patterns are forming that may take some further time to complete. The chemicals and papers reached their highs a long time ago. duPont, for example, reached its high of 249 3/4 over two years ago in 1955. The papers reached their highs in mid-1956 and have declined sharply since. Stocks in the stable income group have been mentioned in this letter for the past few months. They include baking, containers, drugs, electronic-TV, finance, food, food chains, retail, tobaccos and utilities. There are issues in other groups that also appear attractive. WILSON & CO. (15 1/4) has clearly outperformed the rest of the meat packing group. Management has done an excellent job in changes in marketing and manufacturing operations and has eli- minated many unprofitable operations and replaced them with highly efficient modern and up to equipment. The sporting the largest 1- sporting goods company in the world, has grown every year since its start in 1931. Sales are close to 50 million in this division and it contributes importantly to Wilson & Company's earnings. The company is concentrating on higher profit margin products. About 40 of the food line consists of pre-packaged products. Wilson & Co. reported 2.19 for fiscal 1957 as compared with 2.83 in fiscal 1956. The drop in net was sup- posedly due to non-recurring expenses in moving plant operations. 1958 results should be considerably better. The stock paid 1.00 dividend in 1957 to yield 6.6. The technical pattern is potentially attractive. It has held in the broad 17-8 range since 1947 and upside potentials are wide. Relative strength in recent markets has been very good. Tax loss sales in other securities could be switched into Wilson & Co. Inc.