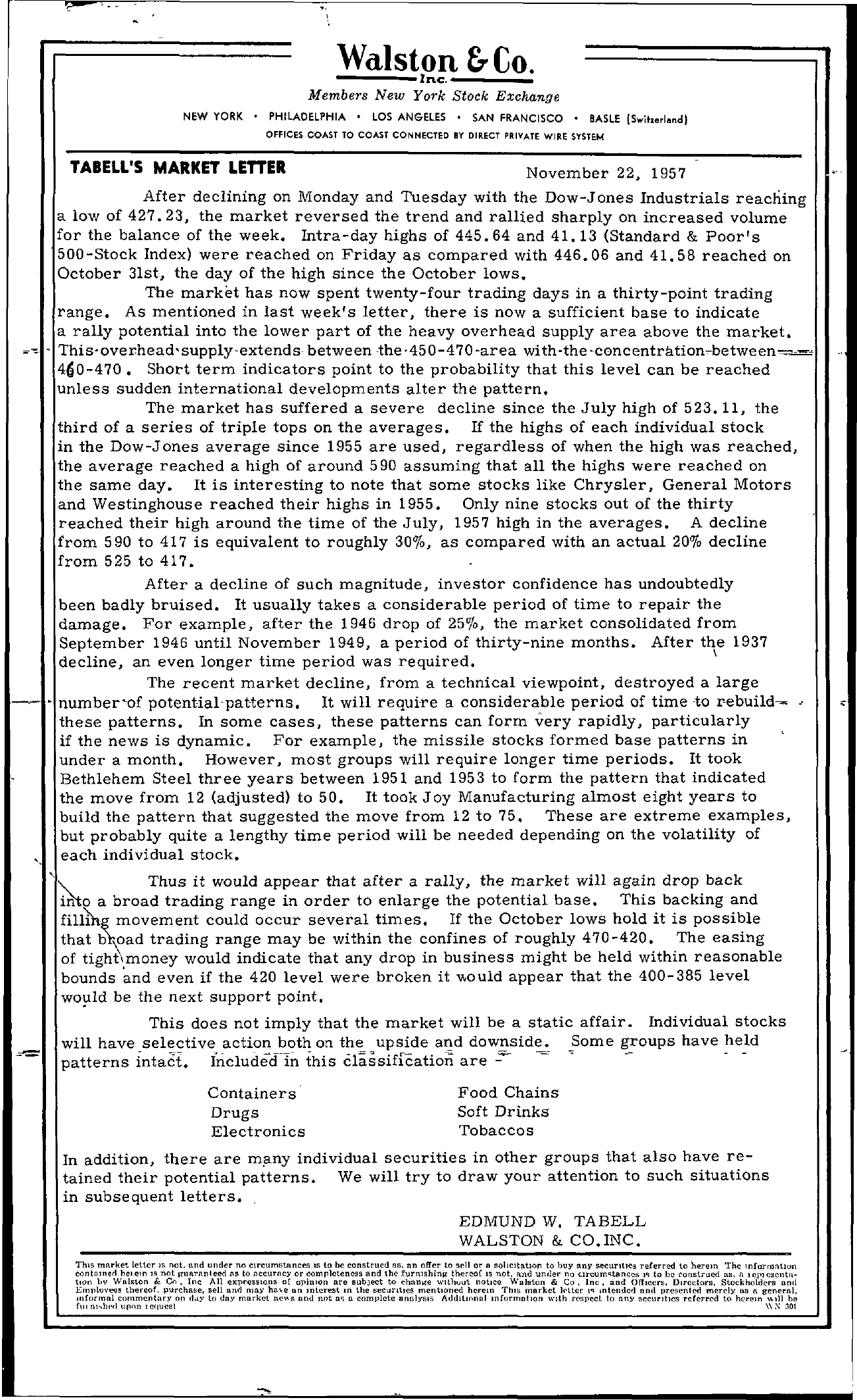 Walston &- Co. – – – – l n c , – Members New York Stock Exchange NEW YORK PHILADELPHIA LOS ANGELES SAN FRANCISCO BASLE (Swaml.nd) OFFICes COAST TO COAST CONNECTED BY DIRECT PRIVATE WIRE SYSTEM TABELL'S MARKET LEnER November 22, 1957 After declining on Monday and Tuesday with the Dow-Jones Industrials reaching a low of 427.23, the market reversed the trend and rallied sharply on increased volume for the balance of the week. Intra-day highs of 445.64 and 41.13 (Standard & Poor's 500-Stock Index) were reached on Friday as compared with 446.06 and 41.58 reached on October 31st, the day of the high since the October lows. The market has now spent twenty-four trading days in a thirty-point trading range. As mentioned in last week's letter, there is now a sufficient base to indicate a rally potential into the lower part of the heavy overhead supply area above the market. This-overhead'supply-extends between the450-470-area with-the-concentration-between 460-470. Short term indicators point to the probability that this level can be reached unless sudden international developments alter the pattern. The market has suffered a severe decline since the July high of 523.11, the third of a series of triple tops on the averages. If the highs of each individual stock in the Dow-J ones average since 1955 are used, regardless of when the high was reached, the average reached a high of around 590 assuming that all the highs were reached on the same day. It is interesting to note that some stocks like Chrysler, General Motors and Westinghouse reached their highs in 1955. Only nine stocks out of the thirty reached their high around the time of the July, 1957 high in the averages. A decline from 590 to 417 is equivalent to roughly 300/0, as compared with an actual 200/0 decline from 525 to 417. After a decline of such magnitude, investor confidence has undoubtedly been badly bruised. It usually takes a considerable period of time to repair the damage. For example, after the 1946 drop of 250/0, the market consolidated from September 1946 until November 1949, a period of thirty-nine months. After the 1937 decline, an even longer time period was required. \ The recent market decline, from a technical viewpoint, destroyed a large -.- . number'of potentialpatterns. It will require a considerable period of time to these patterns. In some cases, these patterns can form very rapidly, particularly if the news is dynamic. For example, the missile stocks formed base patterns in under a month. However, most groups will require longer time periods. It took Bethlehem Steel three years between 1951 and 1953 to form the pattern that indicated the move from 12 (adjusted) to 50. It took Joy Manufacturing almost eight years to build the pattern that suggested the move from 12 to 75. These are extreme examples, but probably quite a lengthy time period will be needed depending on the volatility of '. each individual stock. Thus it would appear that after a rally, the market will again drop back into a broad trading range in order to enlarge the potential base. This backing and filling movement could occur several times. If the October lows hold it is possible that b\oad trading range may be within the confines of roughly 470-420. The easing of tight\money would indicate that any drop in business might be held within reasonable bounds even if the 420 level were broken it ,,ould appear that the 400-385 level woIld be the next support point. This does not imply that the market will be a static affair. Individual stocks Inwill have selective action both on the upside and downside. Some groups have held patterns intact. included this classificatio;'; are- – Containers' Drugs Electronics Food Chains Soft Drinks Tobaccos In addition, there are m,any individual securities in other groups that also have retained their potential patterns. We will try to draw your attention to such situations in subsequent letters. EDMUND W. TABELL WALSTON & CO. INC. ThiS market letter IS not, and under no Circumstances 15 to be construed as, an offer to sell or a soiLcltatwn to buy any seCUritIes referred to herem The InformatIOn contamer! hClem IS not Iuarll.nteed ns to accuracy or completeness and the furmshinl therc6f IS not, and unrler no UTcum;tllfices 1; to be ('onstrl.lcd as, fI leplcscnta- lIOn loy \Vulston & Co, Inc All expreSSions of opinion are subject to wlthuut notlcc alston & Co, Inc, and Officers, Directors, Stockholders and Employees thereof, purchase, sell ani! may ha\e an mterest m the seCUrities mentiOned herem ThiS market 1('tter 1; Intended and presented merely all a genera\, 1l1formnl commentary on rldY to day market nc\\s and not a; a complete analYSIS Additional mrornmtloa With rcspect to nny securitIes referred to herein \\111 be fUI upon I equesl \\;..; 301