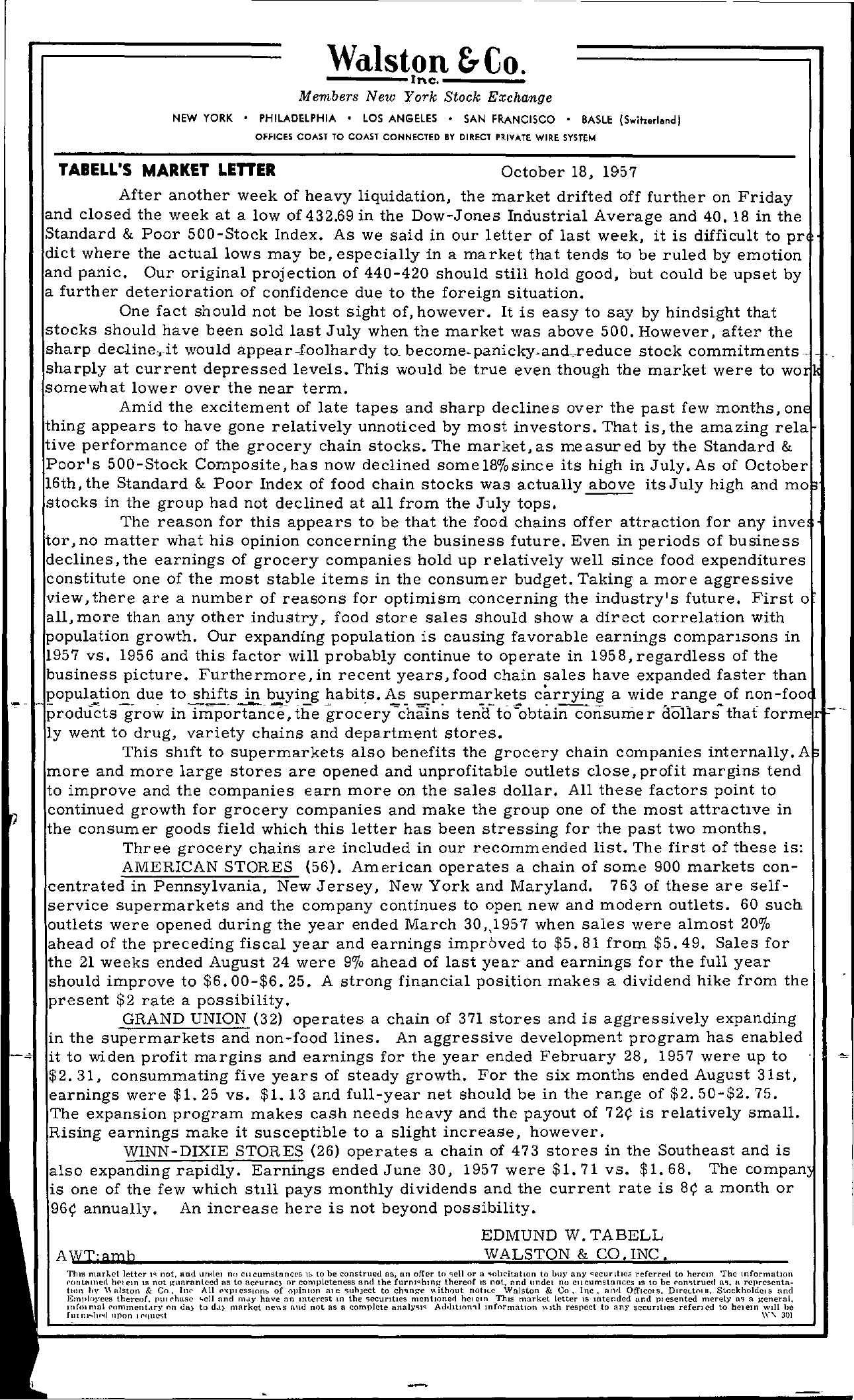 Walston &Co. – – – – I n c . – Members New York Stock EXchange NEW YORK PHILADELPHIA LOS ANGELES SAN FRANCISCO BASLE (Sw;t,I.,dJ OFfiCES COAST TO COAST CONNECTED BY DIRECT PRIVATE WIRE SYSTEM TABELL'S MARKET LEnER October 18, 1957 After another week of heavy liquidation, the market drifted off further on Friday closed the week at a low of 432.69 in the Dow-Jones Industrial Average and 40. 18 in the naara & Poor 500-Stock Index. As we said in our letter of last week, it is difficult to p where the actual lows may be, especially in a market that tends to be ruled by emotion panic. Our original projection of 440-420 should still hold good, but could be upset by further deterioration of confidence due to the foreign situation. One fact should not be lost sight of, however. It is easy to say by hindsight that Istocks should have been sold last July when the market was above 500. However, after the decline.it would appear-foolhardy to stock commitments at current depressed levels. This would be true even though the market were to wo (;cHn.ewhat lower over the near term. Amid the excitement of late tapes and sharp declines over the past few months, g appears to have gone relatively unnoticed by most investors. That is, the amazing r performance of the grocery chain stocks. The market, as me asur ed by the Standard & r's 500-Stock Composite,has now declined some 180/0 since its high in July.As of th,the Standard & Poor Index of food chain stocks was actually above its July high and tocks in the group had not declined at all from the July tops. The reason for this appears to be that the food chains offer attraction for any inve ,no matter what his opinion concerning the business future. Even in periods of business IdE!c,ines, the earnings of grocery companies hold up relatively well since food expenditures stitute one of the most stable items in the consumer budget. Taking a more aggressive w,there are a number of reasons for optimism concerning the industry's future. First 0 ,more than any other industry, food store sales should show a direct correlation with 1f.I\J!-,'Ll .vu growth. Our expanding population is causing favorable earnings comparIsons in 957 vs. 1956 and this factor will probably continue to operate in 1958, regardless of the busi'ness picture. Furthermore, in recent years, food chain sales have expanded faster than Ipclpullatiom due to shifts in buying habits. As supermarkets carrying a wide range of non InrOO(IIH'tgrow in import;rice', the -chains ten1fto r dollars- that went to drug, variety chains and department stores. This ShIft to supermarkets also benefits the grocery chain companies internally. Imorf' and more large stores are opened and unprofitable outlets close, profit margins tend improve and the companies earn more on the sales dollar. All these factors point to Iccmtinued growth for grocery companies and make the group one of the most attractlve in consumer goods field which this letter has been stressing for the past two months. Three grocery chains are included in our recommended list. The first of these is AMERICAN STORES (56). American operates a chain of some 900 markets con- entrated in Pennsylvania, New Jersey, New York and Maryland. 763 of these are self- ervice supermarkets and the company continues to open new and modern outlets. 60 such s were opened during the year ended March 30,,1957 when sales were almost 200/0 ead of the preceding fiscal year and earnings improved to 5.81 from 5.49. Sales for 21 weeks ended August 24 were 90/0 ahead of last year and earnings for the full year should improve to 6.00-6.25. A strong financial position makes a dividend hike from the sent 2 rate a possibility. GRAND UNION (32) operates a chain of 371 stores and is aggressively expanding the supermarkets and non-food lines. An aggressive development program has enabled it to widen profit margins and earnings for the year ended February 28, 1957 were up to 2.31, consummating five years of steady growth. For the six months ended August 31st, were 1. 25 vs. 1. 13 and full-year net should be in the range of 2.50-2.75. expansion program makes cash needs heavy and the payout of 72 is relatively small. 1'….111; earnings make it susceptible to a slight increase, however. WINN-DIXIE STORES (26) operates a chain of 473 stores in the Southeast and is expanding rapidly. Earnings ended June 30, 1957 were 1. 71 vs. 1. 68. The comp one of the few which stlll pays monthly dividends and the current rate is 8 a month or 96 annually. An increase here is not beyond possibility. A'NT'arnb EDMUND W. TABELL WALSTON & CO. INC . ThiS market letter not. and undel no CLI(,Umstnncl'S to be construed os, an offer to 'Jell or a '1ohcitatLOn to buy any ccuntle. rererred to herem The mformabon ('oullunerl h('IClll IS not j(unrantced liS to aCrUrllC) or completeness and the furl'llhmg thereof IS not. and undel nu ClIcumslnnces IS to be ron'ltrucd 11 rCJlrcscntn- hun 1,\' '\ulstun & Co, Ill(, All (,,(PICSSlOlll of opinl)l1 me 'luhJect to ch'lnge ,ithl)ut 110tll..C 'Valston & Co, Inc, mvl Offlccls, DlrcLtCls, SLockholdcls and Eml'lyees thereof. Plllrhusc and 111..1)' have an mtcr'st III the 'lecurlti's m'ntlOnen hCI'1I1 ThiS market letter IS mtended and plescnted merely!l.'l a gcneral, In fill mal 1'ummenLlry nil da to dJ. market nc\\s IIlId not as a complcte anaIY'll Ad.htlOn'll lIIformntlOn respect to any SCCUrities referl ed to hCI em will he fUlllllwfi u))on I '(IIlC'll \\-'\ 301 –