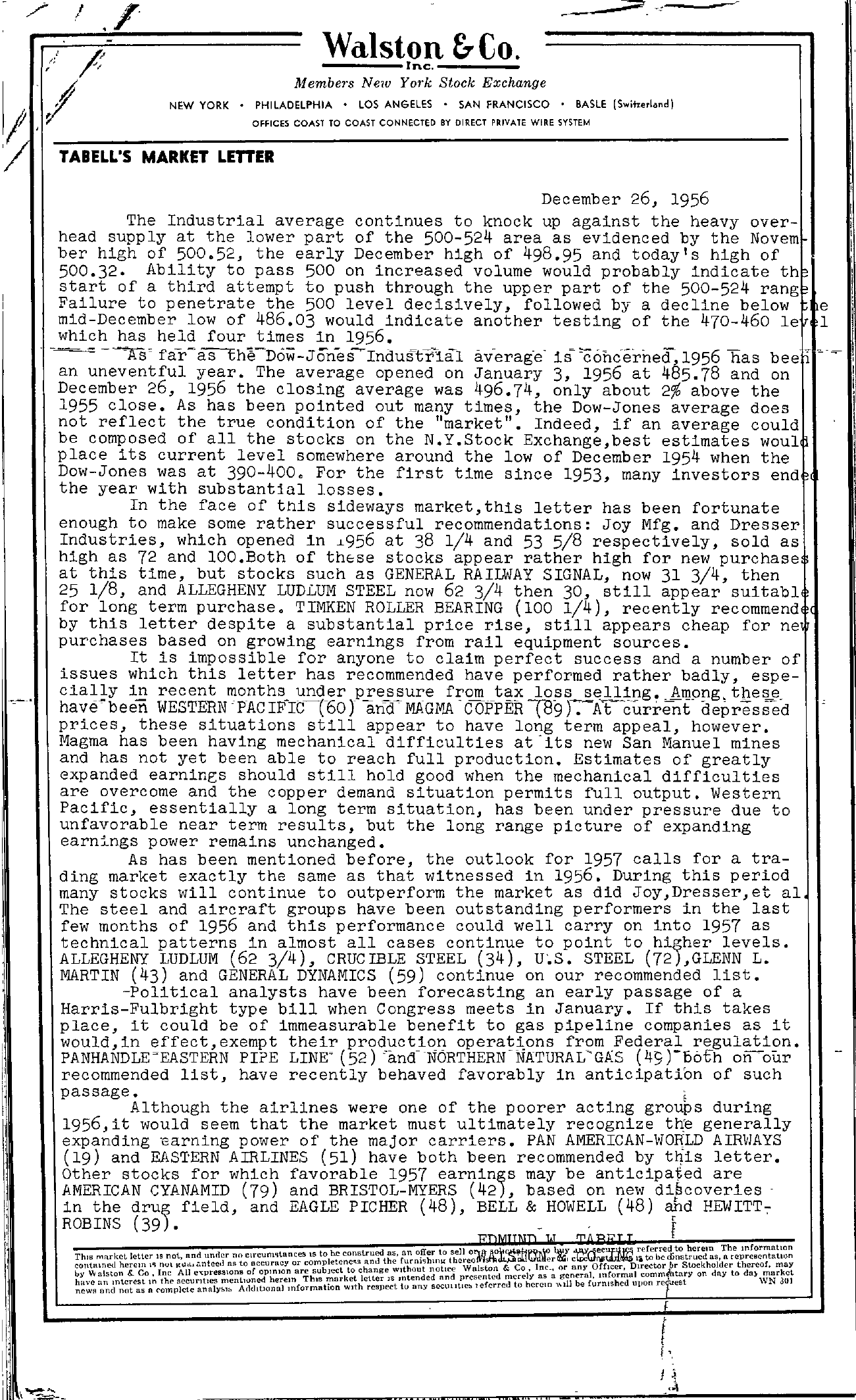 I .F — // Walston &- Co. – – MembeTs New YOI'k Stock Exchange ';/I / NEW YORK PHILADELPHIA LOS ANGELES SAN FRANCISCO BASlE (Switzerland) OFFICES COAST TO COAST CONNECTED BY DIRECT PRIVATE WIRE SYSTEM -T-A-.-EL-L-S–M-A-R-K-ET–L-ETT–E-R—————————————— December 26, 1956 The Industrial average continues to knock up against the heavy over- head supply at the lower part of the 500-524 area as evidenced by the Novem ber high of 500.52, the early December high of 498.95 and today1s high of 500.32. Ability to pass 500 on increased volume would probably indicate th start of a third attempt to push through the upper part of the 500-524 rang Failure to penetrate the 500 level decisively, followed by a decline below mid-December low of 486.03 would indicate another testing of the 470-460 le which has held four times in 1956. ,-'- – –rsc averag'e 1956 has bee an uneventful year. The average opened on January 3, 1956 at 485.78 and on December 26, 1956 the closing average was 496.74, only about 2 above the 1955 close. As has been pointed out many times, the Dow-Jones average does not reflect the true condition of the market. Indeed, if an average could be composed of all the stocks on the N.Y.Stock Exchange,best estimates woul place its current level somewhere around the low of December 1954 when the Dow-Jones was at 390-400, For the first time since 1953, many investors end the year with substantial losses. In the face of this sideways market,this letter has been fortunate enough to make some rather successful recommendations Joy Mfg. and Dresser Industries, which opened in at 38 1/4 and 53 5/8 respectively, sold as high as 72 and 100.Both of th8se stocks appear rather high for new purchase at this time, but stocks such as GENERAL RAILWAY SIGNAL, now 31 3/4, then 25 1/8, and ALLEGHENY LUDLUM STEEL now 62 3/4 then 30, still appear suitabl for long term purchase, TIMKEN ROLLER BEARING (100 1/4), recently recommend by this letter despite a substantial price rise, still appears cheap for ne purchases based on growing earnings from rail equipment sources. It is impossible for anyone to claim perfect success and a number of issues which this letter has recommended have performed rather badly, espe- ancrcially in recent months under pressure from tax loss have-been WESTERN PAC J MJ'WMA COPPER )–AYcurrent depressed prices, these situations still appear to have long term appeal, however. Magma has been having mechanical difficulties at'its new San Manuel mines and has not yet been able to reach full production. Estimates of greatly expanded earninEs should still hold good when the mechanical difficulties are overcome and the copper demand situation permits full output. Western Pacific, essentially a long term situation, has been under pressure due to unfavorable near term results, but the long range picture of expanding earnings power remains unchanged. As has been mentioned before, the outlook for 1957 calls for a tra- ding market exactly the same as that witnessed in 1956. During this period many stocks will continue to outperform the market as did Joy,Dresser,et al The steel and aircraft groups have been outstanding performers in the last few months of 1956 and this performance could well carryon into 1957 as technical patterns in almost all cases continue to point to levels. ALLEGHENY LUDLUM (62 3/4), CRUCIBLE STEEL (34), STEEL (72),GLENN L. MARTIN (43) and GENERAL DYNAMICS (59) continue on our recommended list. -Political analysts have been forecasting an early passage of a Harris-Fulbright type bill when Congress meets in January. If this takes place, it could be of immeasurable benefit to gas pipeline companies as it would,in effect,exempt their PIPE LINE' (52) and NORTHERN NATURAL'GAS (49) Doth recommended list, have recently behaved favorably in anticipation of such passage. f Although the airlines were one of the poorer acting groups during 1956,it would seem that the market must ultimately recognize the generally expanding 'earning power of the major carriers. PAN AMERICAN-WOR;LD AIRWAYS (19) and EAS'I'ERN AIRLINES (51) have both been recommended by tl)is letter. Other stocks for which favorable 1957 may be anticipated are AMERICAN CYANAMID (79) and BRISTOL-MYERS (42), based on new diScoveries' in the field, and EAGLE PICHER (48), BELL & HOWELL (48) ahd HBJITT 7 ROBINS (39). -' EDMUND 1M TABETT f' ff 11 …\O iwy referred to herem The InformatIOn ThiS market letter IS not. Ilnd unner no Circumqlllnces 15 to he construed as, an 0. er se r Ii to be mnstrued as, a reprCBentatwn WOcontained herein Iq not ).IiL,;.ntcct! as to IlCCuracy or completenelS hilt! the the I tOil & Co Inc or any Officer Director Dr Stockholder thereof, may Iby Walston &. Co. Inc All e,,preSSlons of merely as -; general. on day to dal' '''fhneaWvRe alinndInntoetreIslSt (IlnctohmepsleeCteUarnitnileYs!.mIlenAtiUddIt lOlIa In arrnattipOanr weItherespcct tu any seclilitLel leferred to herem '\Ill be furmsheu u,on rc cst \\N JU i e 1 – Itt f f I ,.\