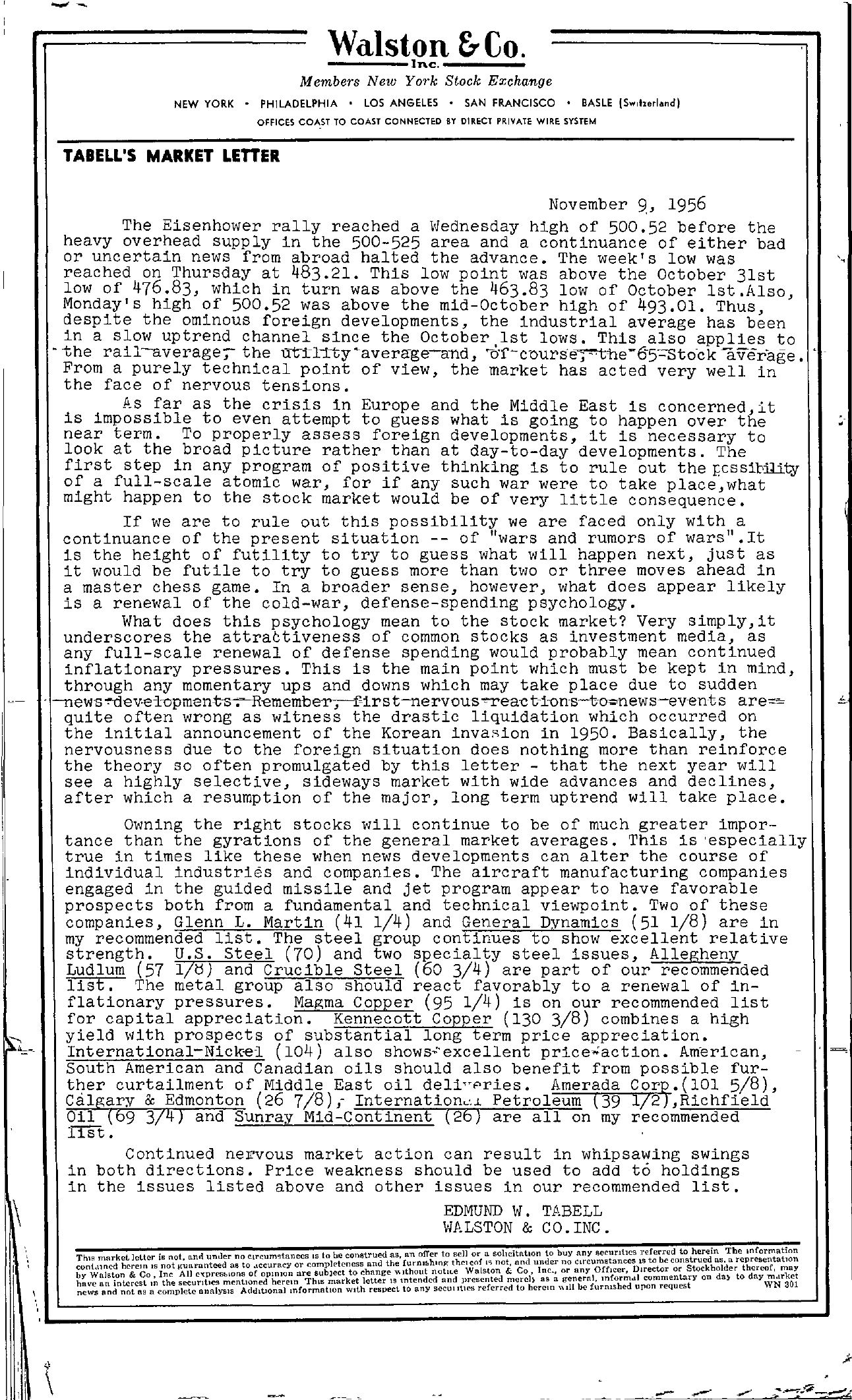 -W—a–l–s-tInocn.–&—-C-o. Members New YOk Stock Exchange NEW YORK PHILADELPHIA LOS ANGELES SAN FRANCISCO BASLE (Sw,',laod) OFFICES COAST TO COAST CONNECTED BY DIRECT PRIVATE WIRE SYSTEM TABELL'S MARKET LEnER November 9., 1956 The Eisenhower rally reached a Wednesday high of 500.52 before the heavy overhead supply in the 500-525 area and a continuance of either bad or uncertain news from abroad halted the advance. The week's low was reached on Thursday at 483.21. This low point was above the October 31st low of 476.83, which in turn was above the 463.83 low of October Ist.Also, Monday's high of 500.52 was above the mid-October high of 493.01. Thus despite the ominous foreign developments, the industrial average has in a slow uptrend channel since the October,lst lows. This also applies to – the rail-average, the average . From a purely technical pOint of view, the market has acted very well in the face of nervous tensions. As far as the crisis in Europe and the Middle East is concerned it is impossible to even attempt to guess what is going to happen over the near term. To properly assess foreign developments, it is necessary to look at the broad picture rather than at day-to-day developments. The first step in any program of positive thinking is to rule out the ICssibility of a full-scale atomic war, for if any such war were to take place,what might happen to the stock market would be of very little consequence. If we are to rule out this possibility we are faced only with a continuance of the present situation — of wars and rumors of wars.It is the height of futility to try to guess what will happen next, just as it would be futile to try to guess more than two or three moves ahead in a master chess game. In a broader sense, however, what does appear likely is a renewal of the cold-war, defense-spending psychology. What does this psychology mean to the stock market Very simplY,it underscores the attractiveness of common stocks as investment media, as any full-scale renewal of defense spending would probably mean continued inflationary pressures. This is the main point which must be kept in mind, through any momentary ups and downs which may take place due to sudden . -news t-nervQus 'reac t-ions-1Yonews-event s are quite often wrong as witness the drastic liquidation which occurred on the initial announcement of the Korean inva0ion in 1950. Basically, the nervousness due to the foreign situation does nothing more than reinforce the theory so often promulgated by this letter – that the next year will see a highly selective, sideways market with wide advances and declines, after which a resumption of the major, long term uptrend will take place. Owning the right stocks will continue to be of much greater impor- tance than the gyrations of the general market averages. This is 'especially true in times like these when news developments can alter the course of individual industries and companies. The aircraft manufacturing companies engaged in the guided missile and jet program appear to have favorable prospects both from a fundamental and technical viewpoint. Two of these companies, Glenn L. Martin (41 1/4) and General Dynamics (51 1/8) are in my recommended list. The steel group continues to show excellent relative strength. U.S. Steel (70) and two specialty steel issues, Allegheny Ludlum (57 and Crucible Steel (60 3/4) are part of our recommended list. The metal group also should react favorably to a renewal of in- flationary pressures. Magma Copper (95 1/4) is on our recommended list for capital appreciation. Kennecott Copper (130 3/8) combines a high yield with prospects of substantial long term price appreciation. International-Nickel (104) also American, South American and Canadian oils should also benefit from possible fur- ther curtailment of Middle East oil deli'pries. Amerada cor). (101 5/8), Calgary & Edmonton (26 7/8) ,- Internationc..J. Petroleum (39 V2, Richfield Oil (69 3/4) and Sunray Mid-Continent (26) are all on my recommended list. Continued neEVOUS market action can result in whipsawing swings in both directions. Price weakness should be used to add to holdings in the issues listed above and other issues in our recommended list. EDMUND W. TABELL WALSTON & CO. INC. k I r is not anti unJer no IS to he construed as, an oITer to sell or a sohcitntlon to buy any secuntIes referred to herein The Information not as to .tccuracy or completeness and the !Ilrmbhlng thC1WOO', 1; not& .Cd ulnder no b WIt & Co Inc All C'I(preS!LOns of opmIOn nrc subJect to change v,lthout noble aston 0, nc., or any Icer, k 31the seeuntles mentIoned herem ThIS market letter IS mtendcd and presented mereh as a general, mform.!.l commentnry on dalo to day m.Jr news and not as a completc analysIs AddItIOnal mformatlOn wIth rcspect to any seculltlCs refcrred to hercm \\111 be f\lrmshed upon request \VN 3 ' . i \ I