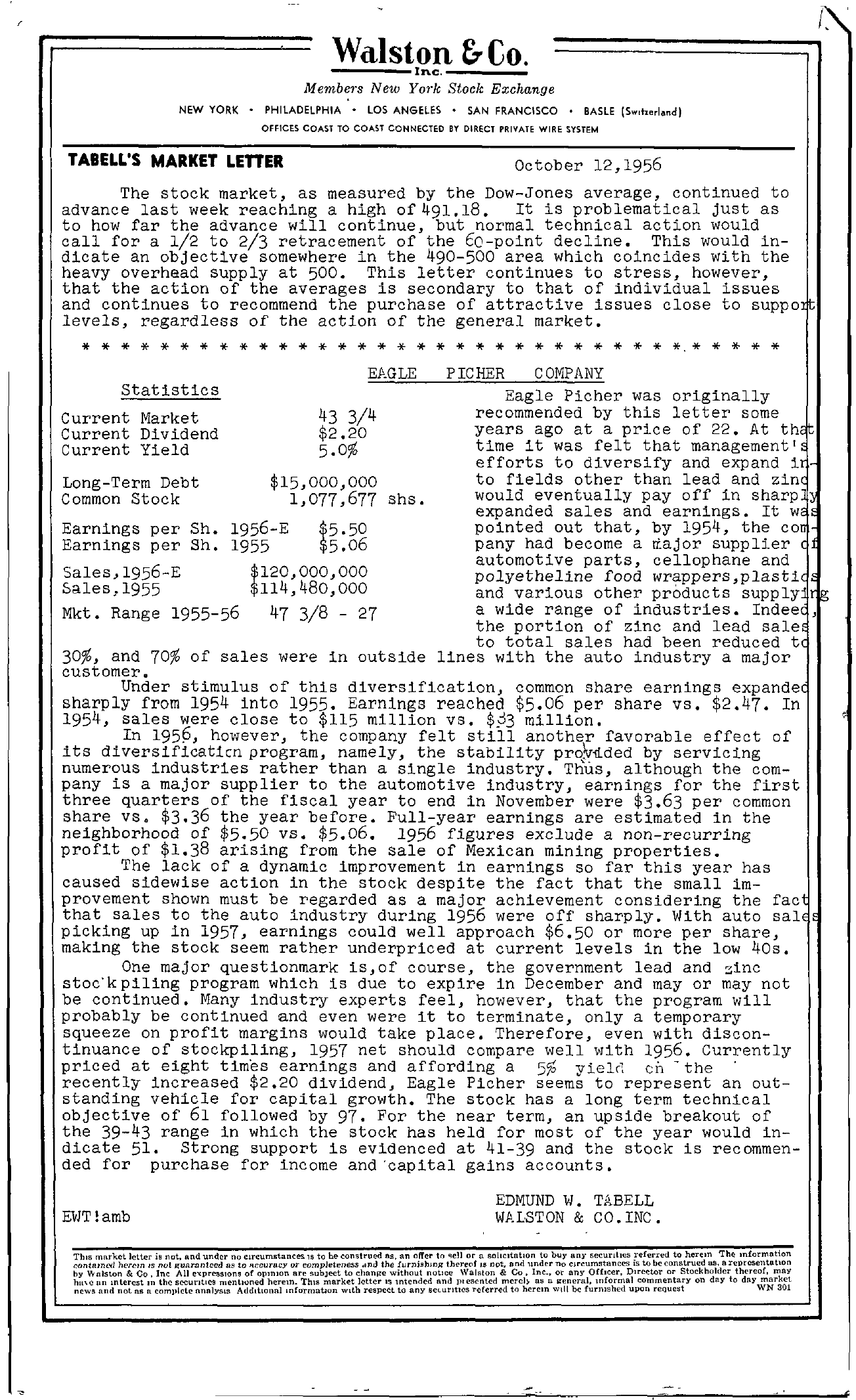 WalstIoncn, &Co. Membe1's New Y01'k Stock Exchange NEW YORK PHILADELPHIA LOS ANGELES SAN fRANCISCO BASLE (Sw,hl.nd) OFFICES COAST TO COAST CONNECTED BY DIRECT PRIVATE WIRE SYSTEM I I, TABELL'S MARKET LETTER October 12,1956 The stock market, as measured by the Dow-Jones average, continued to advance last week reaching a high of 491.18. It is problematical just as to how far the advance will continue, but normal technical action would call for a 1/2 to 2/3 retracement of the cO-point decline. This would indicate an objective somewhere in the 490-500 area which coincides with the heavy overhead supply at 500. This letter continues to stress, however, that the action of the averages is secondary to that of indiVidual issues and continues to recommend the purchase of attractive issues close to suppoJ levels, regardless of the action of the general market. . EAGLE PICHER COMPANY Statistics Eagle Picher was originally Current Market Current Dividend Current Yield 43 3/4 2.20 5.0 recommended by this letter some years ago at a price of 22. At the time it was felt that management', efforts to diversify and expand il Long-Term Debt Common Stock 15,000,000 1,077,677 shs. to fields other than lead and zinc would eventually payoff in sharp expanded sales and earnings. It Earnings per Sh. 1956-E 5.50 pointed out that, by 1954, the cor Earnings per Sh. 1955 5.06 pany had become a rr.ajor supplier ( automotive parts, cellophane and Sales,1956-E 120,000,000 polyetheline food wrappers,plasti 5ales,1955 114,480,000 and various other products supply Mkt. Range 1955-56 47 3/8 – 27 a wide range of industries. Indee(, the portion of zinc and lead sale to total sales had been reduced t 30, and 70 of sales were in outside lines with the auto industry a major customer. Under stimulus of this diversification, common share earnings expande sharply from 1954 into 1955. Earnings reached 5.06 per share vs. 2.47. In 1954, sales were close to 115 million vs. million. In however, the company felt still anothe,r favorable effect of its diversificaticn program, namely, the stability by serVicing numerous industries rather than a single industry. ThUS, although the com- pany is a major supplier to the automotive industry, earnings for the first three quarters of the fiscal year to end in November were 3.63 per common share vs. 3.36 the year before. Full-year earnings are estimated in the neighborhood of 5.50 vs. 5.06. 1956 figures exclude a non-recurring profit of 1.38 arising from the sale of Mexican mining properties. The lack of a dynamic improvement in earnings so far this year has caused Sidewise action in the stock despite the fact that the small im- provement shown must be regarded as a major achievement conSidering the fac i that sales to the auto industry during 1956 were off sharply. With auto salE picking up in 1957, earnings could well approach 6.50 or more per share, making the stock seem rather underpriced at current levels in the low 40s. One major questionmark is,of course, the government lead and stoc'kpiling program which is due to expire in December and mayor may not be continued. Many industry experts feel, however, that the program will probably be continued and even were it to terminate, only a temporary squeeze on profit margins would take place. Therefore, even with discon- tinuance of stockpiling, 1957 net should compare well with priced at eight tim'es earnings and affording a 5 yielr1 1cn95-6t.hCe ur'rently recently increased 2.20 dividend, Eagle Picher seems to represent an outstanding vehicle for capital growth. The stock has a long term technical objective of 61 followed by 97. For the near term, an upside breakout of the 39-43 range in which the stock has held for most of the year would indicate 51. Strong support is evidenced at 41-39 and the stock is recommended for purchase for income and 'capital gains accounts. EvlT lamb EDMUND vi. TABELL WALSTON & CO. INC ThIS market letter is not. and under no Circumstances 15 to he construed as, an offer to '1ell or (l soiLcltntlOn to buy any seCUritIes Feft'rred to herem The mformation contained herem IS not gUllrnntced as to ,\CcurliCY or completeness dni! the iurnishlflg thereof IS not, and under no Circumstances IS to be construed as, a representatIOn hy Walston & Co, Inc All expreSS10ns of opmlon are subJect to chanRc without notice Walston & Co, Inc. at any Officer, Dlreetor or Stockholder thereof, may hllH' un interest In the securities mentIOned herem ThiS market letter IS intended and plescnted mereh as 11 generui. mformal commentary on day to day news und not as Il complete nnnlYSls Addlt10nal Information With respect to any S('Lurltlcs referred to herem Will be furnished upon request \\ N 301