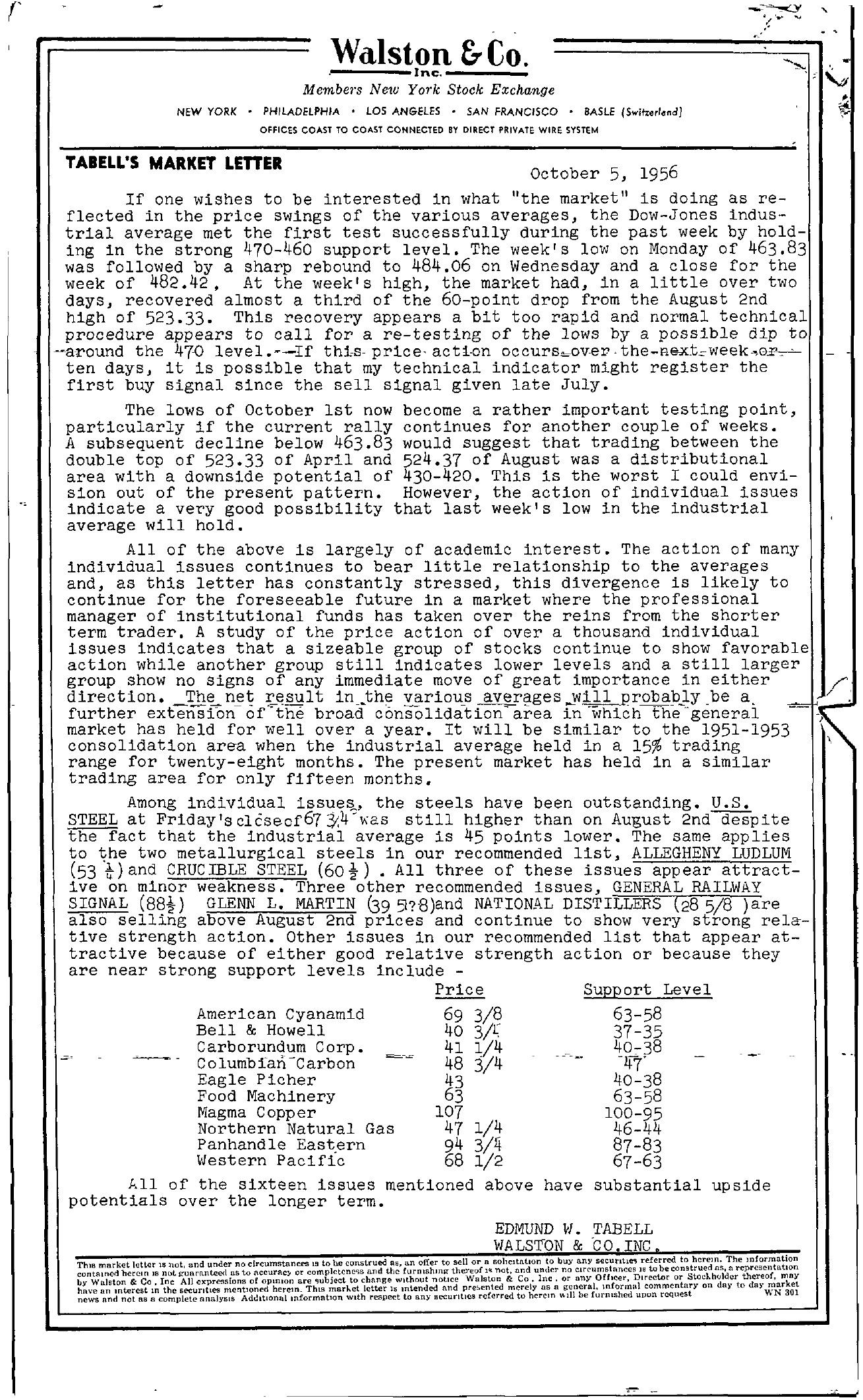 r Walston &Co. .- -. . . . . . . . . .- – I n c. . . . . . . . . . . . . . . . . . . . . MembeTs New YOI-k Stock Exchange NEW YORK PHILADELPHIA LOS ANGELES SAN FRANCISCO BASLE (SwUm/.nd) OFFICES COAST TO COAST CONNECTED BY DIRECT PRIVATE WIRE SYSTEM TABELL'S MARKET LmER October 5, 1956 If one wishes to be interested in what the market is doing as reflected in the price swings of the various averages, the Dow-Jones indus- trial average met the first test successfully during the past week by holding in the strong 470-460 support level. The week's low on Monday of 463.83 was followed by a sharp rebound to 484.06 on Wednesday and a close for the week of 482.42, At the week's high, the market had, in a little over two days, recovered almost a third of the 60-point drop from the August 2nd high of 523.33. This recovery appears a bit too rapid and normal technical procedure appears to call for a re-testing of the lows by a possible dip to –around the 470 level.–If thi-s- price- acti-on occursoverthe-l'lextweek-,o.I'….–'ten days, it is possible that my technical indicator might register the first buy signal since the sell signal given late July. The lows of October 1st now become a rather important testing point, particularly if the current rally continues for another couple of weeks. A subsequent decline below 463.83 would suggest that trading between the double top of 523.33 of April and 524.37 of August was a distributional area with a downside potential of 430-420. This is the worst I could envision out of the present pattern. However, the action of individual issues indicate a very good possibility that last week's low in the industrial average will hold. All of the above is largely of academic interest. The action of many individual issues continues to bear little relationship to the averages and, as this letter has constantly stressed, this divergence is likely to continue for the foreseeable future in a market where the professional manager of institutional funds has taken over the reins from the shorter term trader. A study of the price action of over a thousand individual issues indicates that a sizeable group of stocks continue to show favorable action while another group still indicates lower levels and a still larger group show no Signs of any immediate move of great importance in either direction. various be a further extension of the broad consolidation area in which the general market has held for well over a year. It will be similar to the 1951-1953 consolidation area when the industrial average held in a 15 trading range for twenty-eight months. The present market has held in a similar trading area for only fifteen months. Among individual the steels have been outstanding. U.S. STEEL at Friday's clcseof67 3-4 ',as still higher than on August 2nd despite the fact that the industrial average is 45 points lower. The same applies to the two metallurgical steels in our recommended list, ALLEGHENY LUDLUM (53 and CRUCIBLE STEEL (60 All three of these issues appear attract- ive on minor weakness. Three other recommended issues, GENERAL RAILWAY SIGNAL GLENN L. MARTIN 89518)and NATIONAL DISTILLERS (285/8 )are also selling above August 2nd prices and continue to show very strong rela- tive strength action. Other issues in our recommended list that appear at- tractive because of either good relative strength action or because they are near strong support levels include – Price SUI2I2ort Level — – —– American Cyanamid Bell & Howell Carborundum Corp. Columbian -Carbon -. Eagle Picher Food Machinery Magma Copper Northern Natural Gas Panhandle Eastern Western PaCific 69 3/8 40 3/( 41 1/4 48 3/4 43 63 107 47 1/4 94 3/4 68 1/2 63-58 37-35 -.— 40-38 -4'( 40-38 63-58 100-95 46-44 87-83 67-63 – – — kll of the sixteen issues mentioned above have substantial upside potentials over the longer term. EDMUND W. TABELL WALSTON & CO.INC , ThlS market letter 18 not, and under no circumstances 19 to he construed as, an offer to sell or a 6ohcltataon to buy Ilny secut'ltle'i referred to herem. The con taL ned herein lS n(;lt guaranteed as to or complctcnc'ls and the furmshmg thereof I' not, and under no CLrcumstnnccs IS to be rer;CSC1tntlo by Walston & Co Inr All expressions of opinIOn are 'lubject to change Without notice Walston & Co. Inc, or any Officer, Dlredor or toe 0 er ereo, ffikllY have an Interest the mentIoned herein. ThiS market letter IS mtendcd and merely as a general, InfOrmll rommenlary on to news and not R8 1I complete nnalysis AddltlOnalmformatlon With respect to any IICCUrltlCS referred to herem …. 111 be furnished upon request /' /' ..