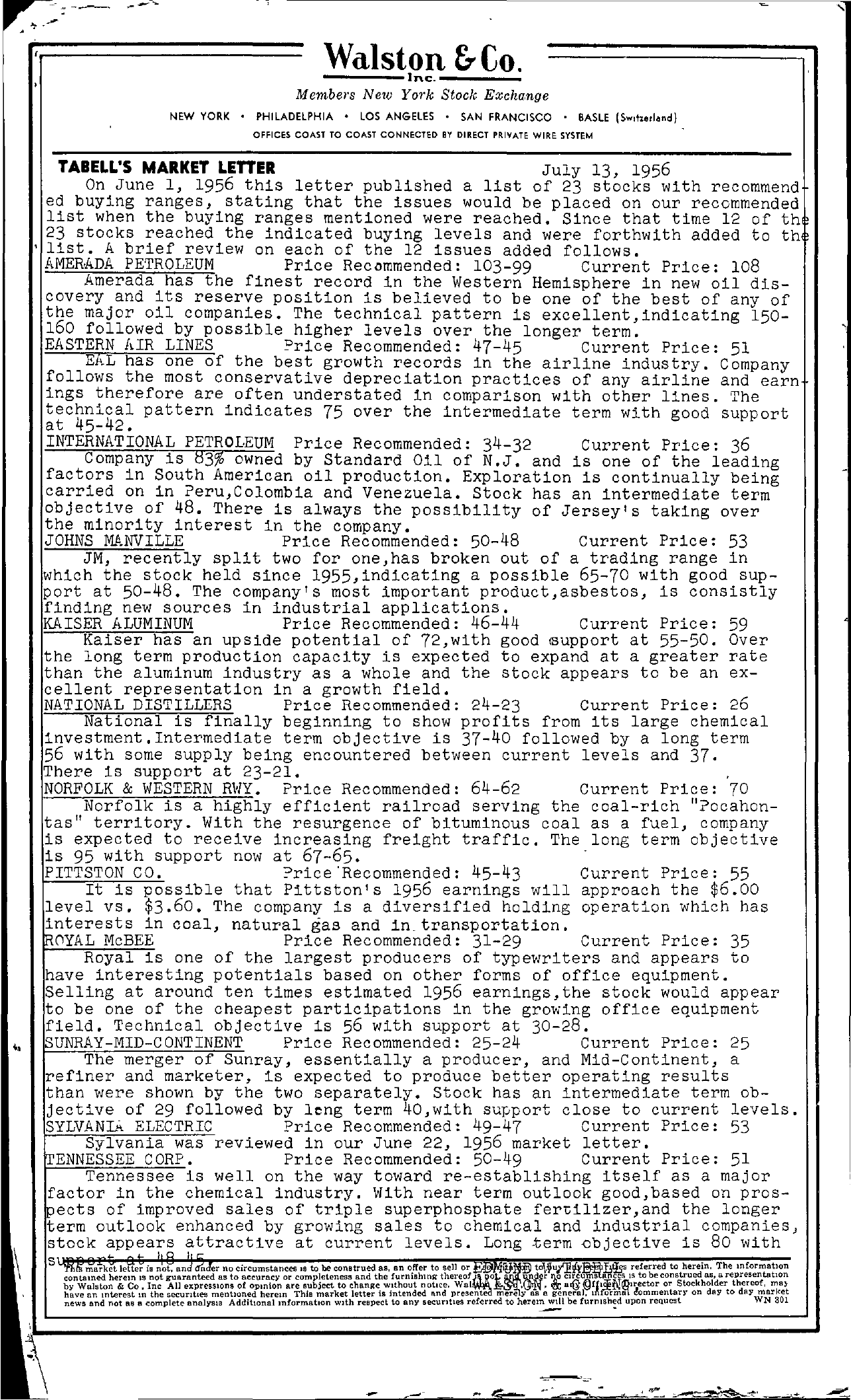 — NEW YORK Wdlston &Co. Inc. Members New Y Qj'Ie Stock EXcha,nge PHILADELPHIA LOS ANGELES SAN FRANC.SCO BASLE ISw,t,l.nd) OFFICES COAST TO COAST CONNECTED BY DIRECT PRIVATE WIRE SYSTEM TABELL'S MARKET LEnER July 13, 1956 On June 1, 1956 this letter published a list of 23 stocks with recommend ed buying ranges, stating that the issues would be placed on our recommended list when the buying ranges mentioned were reached. Since that time 12 of th 23 stocks reached the indicated buying levels and were forthwith added to th , list. A brief review on each of the 12 issues added follows. AMER.ADA PETROLEUM Price Recmmended 103-99 Current Price 108 Amerada has the finest record in the Western Hemisphere in new oil dis- covery and its reserve position is believed to be one of the best of any of the major oil companies. The technical pattern is excellent,indicating 150- 160 followed by possible higher levels over the longer term. EASTERN AIR LINES Price Recommended 47-45 Current Price 51 ERL has one of the best growth records in the airline industry. Company follows the most conservative depreciation practices of any airline and earn ings therefore are often understated in comparison with other lines. The technical pattern indicates 75 over the intermediate term with good support at 45-42. INTERNATIONAL PETROLEUM Price Recommended 34-32 Current Price 36 Company is 83 owned by Standard Oil of N.J. and is one of the leading factors in South American oil production. Exploration is continually being carried on in eru,Colombia and Venezuela. Stock has an intermediate term objective of 48. There is always the possibility of Jersey's taking over the minority interest in the company. JOHNS MANVILLE Price Recommended 50-48 Current Price 53 JM, recently split two for one,has broken out of a trading range in which the stock held since 1955,indicating a possible 65-70 with good sup- port at 50-48. The company's most important product,asbestos, is consistly finding new sources in industrial applications. KAISER ALUMINUM Price Recommended 46-44 Current Price 59 Kaiser has an upside potential of 72,with good Gupport at 55-50. Over the long term production capacity is expected to expand at a greater rate than the aluminum industry as a whole and the stock appears to be an ex- cellent representation in a growth field. NATIONAL DISTILLERS Price Recommended 24-23 Current Price 26 National is finally beginning to show profits from its large chemical investment.Intermediate term objective is 37-40 followed by a long term 56 with some supply being encountered between current levels and 37. There is support at 23-21. NORFOLK & WESTERN RVlY. Price Recommended 64-62 Current Price 70 Norfolk is a highly efficient railroad serving the coal-rich ocahon- tas territory. Vlith the resurgence of bituminous coal as a fuel, company is expected to receive increasing freight traffic. The long term objective is 95 with support now at 67-65. PITTSTON CO. rice'Recommended 45-43 Current Price 55 It is possible that Pittston's 1956 earnings will approach the 6.00 level vs. 3.60. The company is a diversified holding operation which has in coal, natural gas and intransportation. McBEE Price Recommended 31-29 Current Price 35 Royal is one of the largest producers of typewriters and appears to have interesting potentials based on other forms of office equipment. Selling at around ten times estimated 1956 earnings,the stock would appear to be one of the cheapest participations in the growing office equipment . field. Technical objective is 56 with support at 30-28. SUNRAY-MID-CONTINENT Price Recommended 25-24 Current Price 25 The merger of Sunray, essentially a producer, and Mid-Continent, a refiner and marketer, is expected to produce better operating results than were shown by the two separately. Stock has an intermediate term ob- jective of 29 followed by leng term 40,with support close to current levels. ELECTRIC Price Recommended 49-47 Current Price 53 Sylvania was reviewed in our June 22, 1956 market letter. CORP. Price Recommended 50-49 Current Price 51 Tennessee is well on the way toward re-establishing itself as a major factor in the chemical industry. With near term outlook good,based on pros- pects of improved sales of triple superphosphate fertilizer,and the longer term outlook enhanced by growing sales to chemical and industrial companies, stock at current levels. Long term Dbjective is 80 with S ''ff..fi market letter is not, no circumstances 18 to be construed as, an offer to sell or rderred to herein, The mformatlOn contaIned herem IS not guaranteed as to accuracy or completeness and the furnishing by Walston & Co Inc All expresSIOns of opinion arc Bubject to change Without notace. Wal ra1),0 clrcctfu'stances IS to be construed as, a representatIon .1JIll'q . nljf'f1ct!NOJlrector or Stockholder thereof, mil.) have an Interest the securitIes mentlOned herem This market letter is intended and presente mere y as a general, c!ommentar)' on day to day market 'L- —'-news and not as a complete analyslB Additional mformatlon With respect to any securities referred to herem Will be furnished upon reque!t WN 301