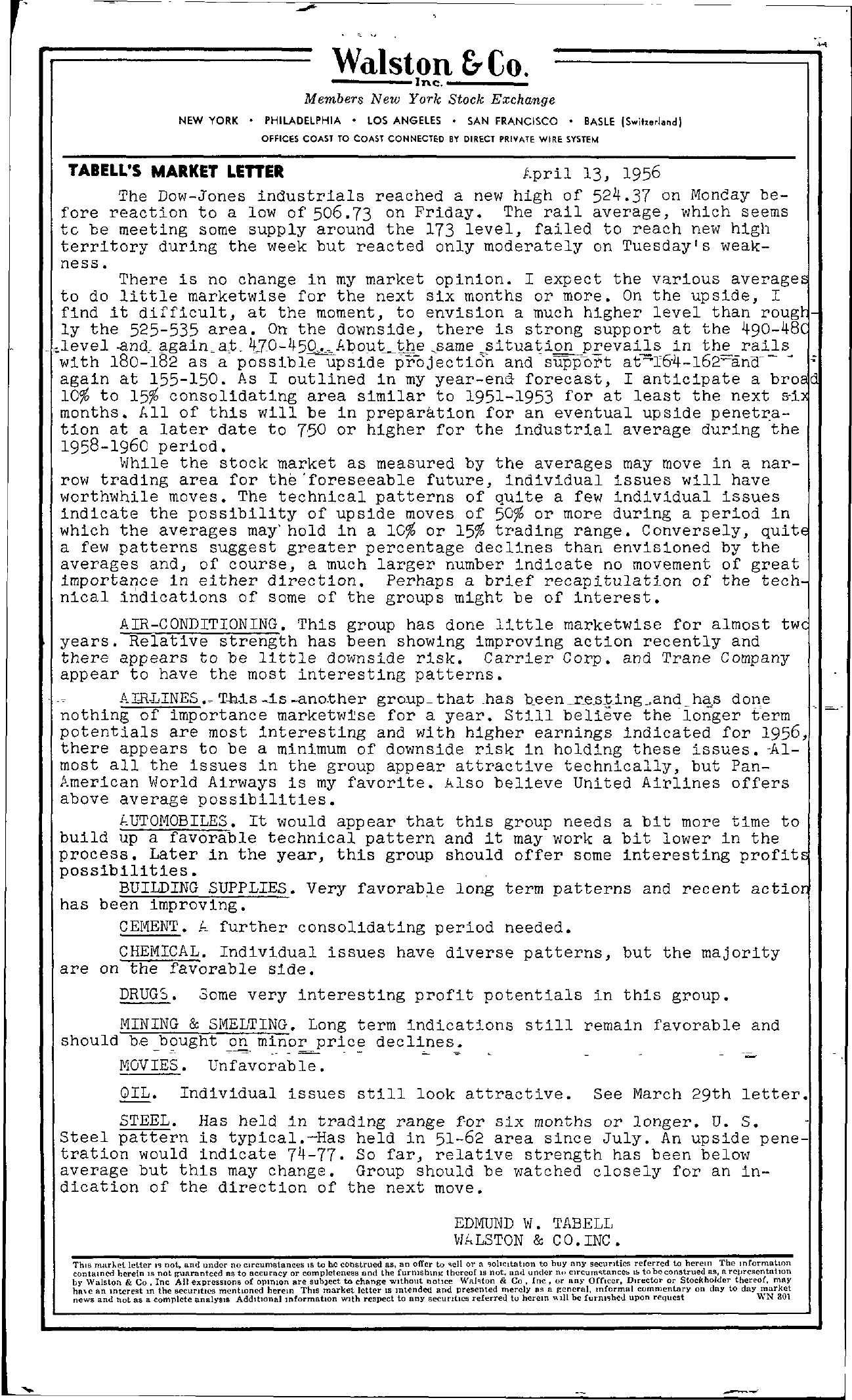 — &- Co.Walston—-Inc. Members New York Stock Exchange NEW YORK PHILADELPHIA LOS ANGELES SAN FRANCISCO BASLE (Sw;t,.,Idl OFFICES COAST TO COAST CONNECTED BY DIRECT PRIVATE WIRE SYSTEM TABEll'S MARKET lEnER April 13, 1956 The Dow-Jones industrials reached a new high of 524.37 on Monday be- fore reaction to a low of 506.73 on Friday. The rail average, which seems tc be meeting some supply around the 173 level, failed to reach new high territory during the week but reacted only moderately on Tuesday's weak- ness. There is no change in my market opinion. I expect the various averagee to do little marketwise for the next six months or more. On the upside, I find it difficult, at the moment, to envision a much higher level than rougr ly the 525-535 area. On the downside, there is strong support at the 490-48c -and. 1l.gain a,t, ,same situation prevails in the rails o with 180-182 as a possible upside pr-ojection and at'r6'4-162-ana- again at 155-150. As I outlined in my year-end forecast, I anticipate a broa 10 to 15 consolidating area similar to 1951-1953 for at least the next fri) months. hll of this will be in preparation for an eventual upside penetra- tion at a later date to 750 or higher for the industrial average during the 1958-1960 period. While the stock market as measured by the averages may move in a nar- row trading area for the 'foreseeable future, individual issues will have worthwhile moves. The technical patterns of quite a few individual issues indicate the possibility of upside moves of 50 or more during a period in which the averages may' hold in a lC or 15 trading range. Conversely, qUitE a few patterns suggest greater percentage declines than envisioned by the averages and, of course, a much larger number indicate no movement of great importance in either direction. Perhaps a brief recapitulation of the tech- nical indications of some of the groups might be of interest. AIR-CONDITIONING. This group has done little marketwise for almost twc years. Relative strength has been showing improving action recently and there appears to be little downside risk. Carrier Corp. and Trane Company appear to have the most interesting patterns. AIRLINES F T-Q.is is -ano.ther group. that has ha.s done nothing of importance marketw\;se for a year. Still believe theionger ferm potentials are most interesting and with higher earnings indicated for 1956, there appears to be a minimum of downSide risk in holding these issues. -Al- most all the issues in the group appear attractive technically, but Pan- American World Airways is my favorite. Also believe United Airlines offers above average possibilities. hUTOMOBILES. It would appear that this group needs a bit more time to build up a favorable technical pattern and it may work a bit lower in the process. Later in the year, this group should offer some interesting profitE possibilities. BUILDING SUPPLIES. Very long term patterns and recent actior has been improving. CEMENT. h further consolidating period needed. CHEMICAL. Individual issues have diverse patterns, but the majority are on the favorable side. DRUGS. 30me very interesting profit potentials in this group. MINING & SMELTING. Long term indications still remain favorable and should b.e bo- ught on mi n-or p – r i c e – declines. MOVIES. Unfavorable. GIL. Individual issues still look attractive. See March 29th letter. STEEL. Has held in trading range ror six months or longer. U. S. Steel pattern is typical.-Has held in 51-62 area since July. An upside penetration would indicate 74-77. So far, relative strength has been below average but this may change. Group should be watched closely for an indication of the direction of the next move. EDMUND W. TABELL vU,LSTON & CO. INC. This mllrh(!t letter not. and under no Clrcum131ances IS to he construed as, an offer to 'lell or n qOhcltntlOn to buy any secufltics referred to herem The mformatlon contained herein IS not gUII.rnnteed ns to accurncy or completeness and the furmshmK thereof IS lIot, anil under no clrcum;tanceb Ib to be construed as, II. re)Jresentntion by \Valston & Co, Inc All expressions of OPinIOn are subJect tG change Without notIce & Co, Inc, or I\ny Officer, Director or Stockholder thereof, may hale an llItcrest III the SccufltlCS mentIoned herem ThiS market letter IS mtendC(! and presented merely us a mformlll commentary on day to day market news and not as a complete anai'SIB AdditIOnal mformatlon WIth respect to any SecUrItlCS referred to herem \\111 be furm.,hcu upon request '\\'N 301