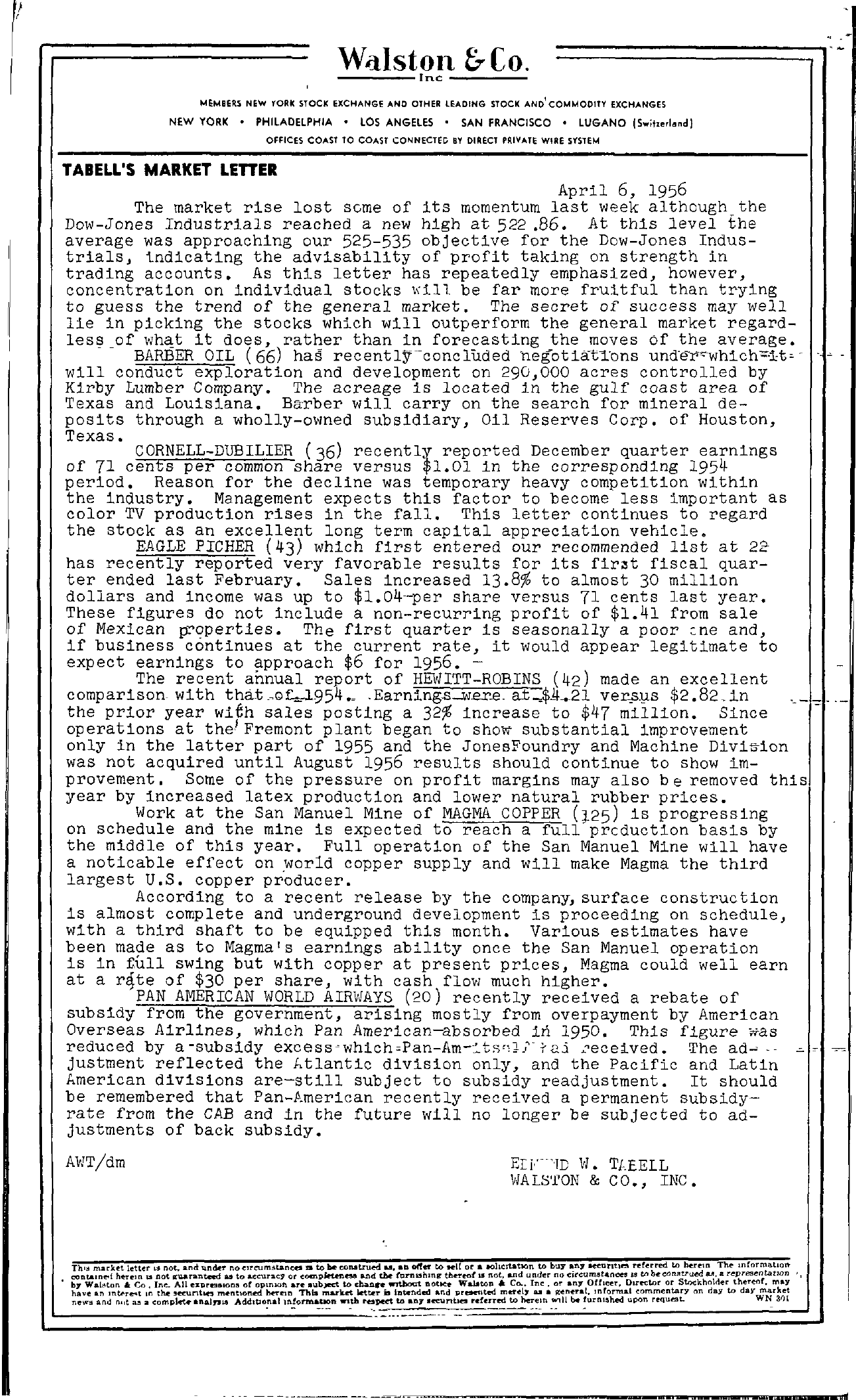 r Wals &-tonnc Co. – – I MEMBERS NEw fORk STOCK EXCHANGE AND OTHER LEADING STOCK AND' COMMODITY EXCHANGES NEW YORK PHILADELPHIA LOS ANGELES SAN FRANCISCO LUGANO (Swit,ld) OFFICES COAST TO COAST CONNECTEr; BY DIRECT PRIVATE WIRE SYSTEM TABELL'S MARKET LEnER April 6, 1956 The market rise lost seme of its momentum last week although the Dow-Jones Industrials reached a new high at 522 .86. At this level the average was approaching our 525-535 objective for the Dow-Jones Indus- trials, indicating the advisability of profit taking on strength in trading accounts. As this letter has repeatedly emphasized, however, concentration on individual stocks 1\111 be far more fruitful than trying to guess the trend of the general market. The secret of success may well lie in picking the stocks which will outperform the general market regard- less of what it does, rather than in forecasting the moves of the average. BARBER OIL (66) has recently-concluded 'negotia-tJons will conduct exploration and development on 290,000 acres controlled by Kirby Lumber Company. The acreage is located in the gulf coast area of Texas and Louisiana. Barber will carryon the search for mineral de- posits through a wholly-owned subsidiary, Oil Reserves Corp. of Houston, Texas. CORNELL-DUBILIER (36) recently reported December quarter earnings of 71 cents per common share versus 1.01 in the corresponding 1954 period. Reason for the decline was temporary heavy competition within the industry. Management expects this factor to become less important as color TV production rises in the fall. This letter continues to regard the stock as an excellent long term capital appreCiation vehicle. EAGLE PICHER (43) which first entered our recommended list at 22 has recently reported very favorable results for its fiscal quar- ter ended last February. Sales increased 13.8 to almost 30 million dollars and income was up to 1.04–per share versus 71 cents last year. These figures do not include a non-recurring profit of 1.41 from sale of Mexican The first quarter is seasonally a poor and, if business continues at the current rate, it would appear legitimate to expect earnings to approach 6 for 1956. – The recent annual report of (42) made an excellent comparison with that -Earning-sw.er.e at …lt.21 versl,lS 2.82 in ,- the prior year with sales posting a 32 increase to 47 million. Since operations at the! Fremont plant began to show substantial improvement only in the latter part of 1955 and the JonesFoundry and Machine was not acquired until August 1956 results should continue to show im- provement. Some of the pressure on profit margins may also be removed this year by increased latex production and lower natural rubber prices. Work at the San Manuel Mine of MAGMA COPPER (25) is progressing on schedule and the mine is expected to reach a full prcduction basis by the middle of this year. Full operation of the San Manuel Mine will have a noticable effect on wor1d copper supply and will make Magma the third largest U.S. copper producer. According to a recent release by the company, surface construction is almost complete and underground development is proceeding on schedule, with a third shaft to be equipped this month. Various estimates have been made as to Magma's earnings ability once the San Manuel operation is in ,illl swing but with copper at present prices, Magma could well earn at a r4te of 30 per share, with cash flow much higher. PAN AMERICAN WORLD AIRWAYS (20) recently received a rebate of subsidy from the government, arising mostly from overpayment by American Overseas Airlines, which Pan American-absorbed in 1950. This figure was reduced by a-subsidy 2eceived. The . justment reflected the htlantic division only, and the Pacific and Latin hmerican divisions are-still subject to subsidy readjustment. It should be remembered that Pan-American recently received a permanent subsidy- rate from the CAB and in the future will no longer be subjected to adjustments of back subsidy. AvlT/dm En—TD vi. THELL vlALSTON & CO., INC. '- Thll letter ur. not. and lI.ndoH' noelreumltaned IS to be eonatrued …. aD. offe'l' to HI( or a .aliertatlCIn to buy any nferred to herein The mf()rmatlon \.t not ,;…..rantftd as to aecuracy or eoaJ.pWtenesa tM t'tIrnfiltung ' not, and under no oI!'ircum.,t.noes IS t.n beeon3trued U, a reprf!'l3entatlOl'l by 6 Co, All elllrltlllllOM of osunlOn are aub,.,ct to 1n1.hout Walaton. Co.. Inc, or any Director or St.Qekh()lder t.hereof, mlY have In Inttore'Ot In 5Untae mentlonei he'reln Thb markltt Letter is intended and Ilre5ft).ted meTel,. A.I II genet'a!, Informal commentary on oay to day market ne….s and nt a., a eompJeu. analJ'lfil to an,. Iunbe. referred to be urntllhed upon requll'!St.. WN 3I)l – — …… III