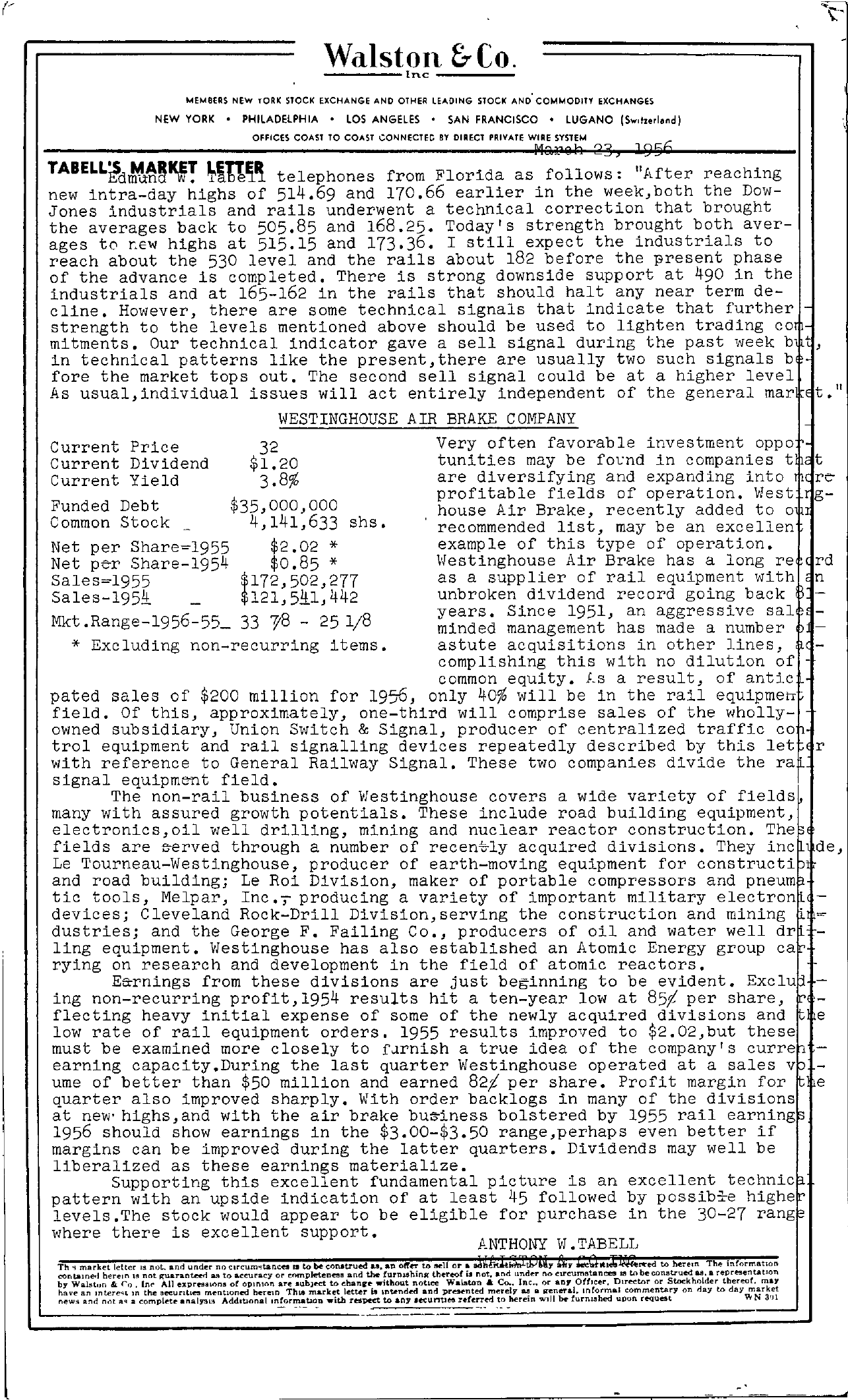 -W—a–l-s-tloncn–&—C–o-. MEM8ERS NEw tORK STOCK EXCHANGE AND OTHER LEADING STOCK AND' COMMODITY EXCHANGES NEW YORK PHILADELPHIA LOS ANGELES SAN FRANCISCO LUGANO ISw ..d) OFFICES COAST TO COAST CONNECTEC BY DIRECT PRIVATE WIRE SYSTEM PliU,1;j 13, J 9196 telephones from Florida as follows After reaching new intra-day highs of 514.69 and 170.66 earlier in the week,both the Dow- Jones industrials and rails underwent a technical correction that brought the averages back to 505.85 and 168.25. Today's strength brought both aver- ages to highs at 515.15 and 173.36. I still expect the industrials to reach about the 530 level and the rails about 182 before the phase of the advance is completed. There is strong downside support at 490 in the industrials and at 165-162 in the rails that should halt any near term de- cline. However, there are some technical signals that indicate that further strength to the levels mentioned above mitments. Our technical indicator gave should a sell be used to lighten trading co signal during the past week b 1- , in technical patterns like the present,there are usually two such signals b fore the market tops out. The second sell signal could be at a higher level As usual,individual issues will act entirely independent of the general mar t.lI WESTINGHOUSE AIR BRAKE COMPANY Current Price Current Dividend Current Yield Funded Debt Common Stock 32 1.20 3.8 35,000,000 4,141,633 shs. Very often favorable investment oppo tunities may be fOI-'nd in companies t p, t are diversifying and expanding into rc profitable fields of operation. Vlestl, g- house Air Brake, recently added to recommended list, may be an excellen Net per Share1955 2.02 Net per Share-1954 0.85 Sales1955 172,502,277 example of this type of operation. Westinghouse Air Brake has a long re rd as a supplier of rail equipment with n unbroken dividend record going back Mkt .Range-1956-55 33 1'8 – 25 1/8 years. Since 1951, an aggressive sal minded management has made a number Excluding non-recurring items. astute acquisitions in other lines, complishing this with no dilution of common equity. ks a result, of antic pated sales of 200 million for 1956, only 40 will be in the rail equipmerr field. Of this, approximately, one-third will comprise sales of the wholly- owned subsidiary, Union Switch & Signal, producer of centralized traffic co trol equipment and rail signalling devices repeatedly described by this let r with reference to General Railway Signal. These two companies divide the ra' signal equipm&nt field. The non-rail business of Westinghouse covers a wide variety of fields many with assured growth potentials. These include road building equipment, electronics,oil well drilling, mining and nuclear reactor construction. The fields are frerved through a number of acquired divisions. They incllde, Le Tourneau-Westinghouse, producer of earth-moving equipment for constructiJl and road buildingj Le Roi Division, maker of portable compressors and tic tools, Melpar, Inc., producing a variety of important military electron' – devicesj Cleveland Rock-Drill Division,serving the construction and mining il dustriesj and the George F. Failing Co., producers of oil and water well dr' – ling equipment. vlestinghouse has also established an Atomic Energy group rying on research and development in the field of atomic reactors. Earnings from these divisions are just be5inning to be evident. Excluj- ing non-recurring profit,1954 results hit a ten-year low at 851 per share, r,- flecting heavy initial expense of some of the newly acquired divisions and e low rate of rail equipment orders. 1955 results improved to 2.02,but these must be examined more closely to a true idea of the company1s currer earning capacity.During the last quarter Vlestinghouse operated at a sales vp – ume of better than 50 million and earned 821 per share. Profit margin for t. e quarter also improved sharply. With order backlogs in many of the divisions at new' highs,and with the air brake bUfriness bolstered by 1955 rail earnings 1956 should show earnings in the 3.00-3.50 range,perhaps even better if margins can be improved during the latter quarters. Dividends may well be liberalized as these earnings materialize. Supporting this excellent fundamental picture is an excellent pattern with an upside indication of at least 45 followed by possibTe levels.The stock would appear to be eligible for purchase in the 30-27 where there is excellent support. ANTHONY 1'1. TABELL contained h by Walltun e.Irierin(). not pUAranteel as to aceuracy or In.. All exprr.!.uons or opinion are and the !urnJ.Shing thel'eof La not, and under no Clreumlltanees III tll beeon!ltrued as, a reprl!!SentatJon to ehanlre without notlee Walaton. Co.. Inc. or any Officer, DlreetGr or Stockholder thereof, may have an mtere..t In the mentIOned heTeln TIllS market letter bI Ultended and merely u a I!ennal. mrormal on ,jay to day market new.'! and nc)t a .. a Addlb()nal InformatlOn with respect to any Jecuntle!l referred to herein WlJJ furnished upon request Vr N 3'Jl