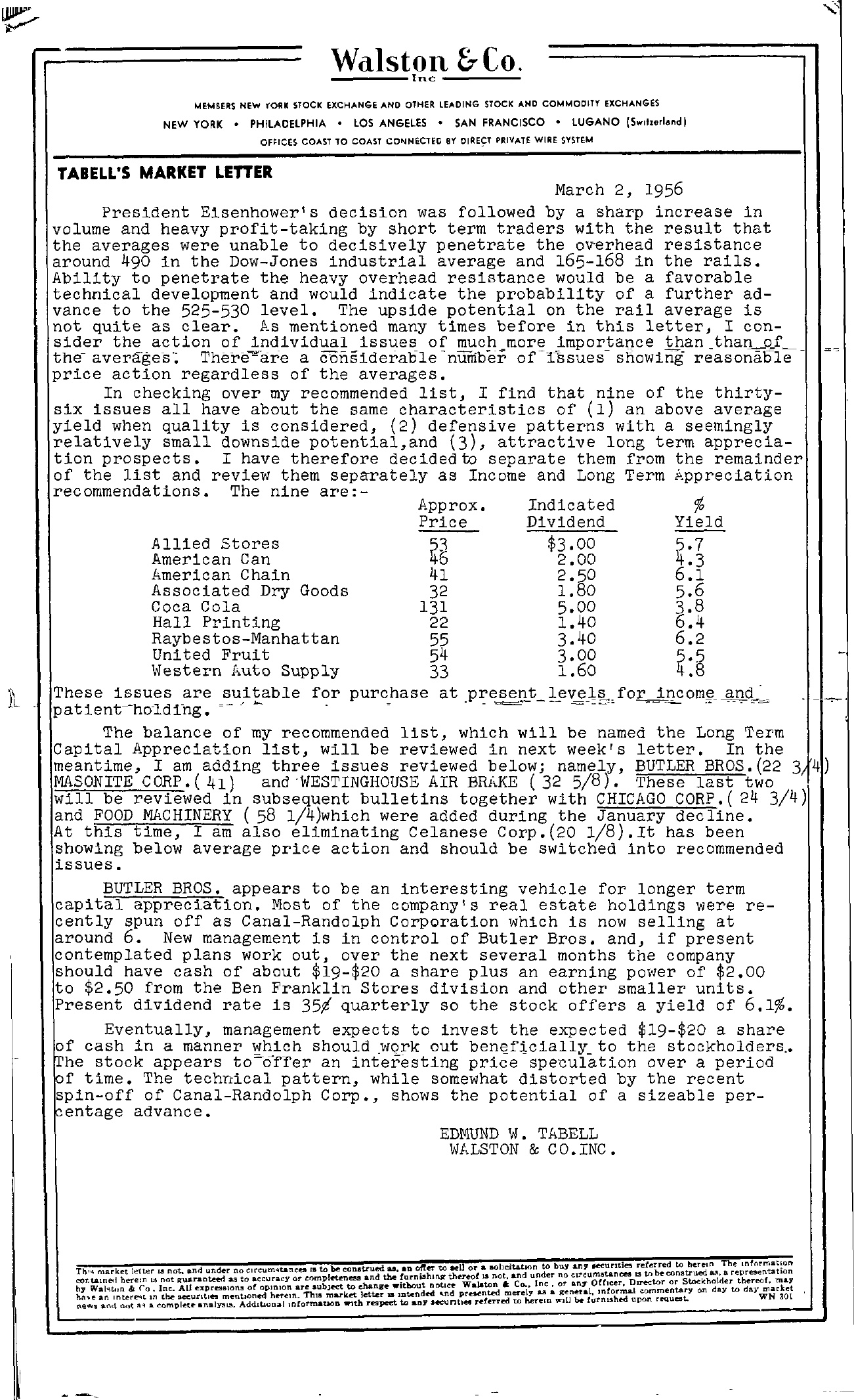 Walston &Co. Inc t.4EMBE-RS NEw YORK STOCK EXCHANGE AND OTHER LEADING STOCK AND COMMODITY EXCHANGES NEW YORK PHILADELPHIA LOS ANGELES SAN FRANCISCO LUGANO Sw,,,.d.,d I OFHCES COAST TO COAST BY PRIVATE WIRE SYSTEM TABELL'S MARKET LETTER March 2, 1956 President Eisenhower's decision was followed by a sharp increase in volume and heavy profit-taking by short term traders with the result that the averages were unable to decisively penetrate the overhead resistance around 490 in the Dow-Jones industrial average and 165-168 in the rails. Ability to penetrate the heavy overhead resistance would be a favorable technical development and would indicate the probability of a further advance to the 525-530 level. The upside potential on the rail average is not quite as clear. As mentioned many times before in this letter, I consider the action of individual issues of muchmore importance thanthanQf the- averages There'are a considera1ile -number orl13sues- snowirig reasonaole price action regardless of the averages. In checking over my recommended list, I find that nine of the thirty- six issues all have about the same characteristics of (1) an above average yield when quality is considered, (2) defensive patterns with a seemingly relatively small downside potential,and (3), attractive long term apprecia- tion prospects. I have therefore decidedw separate them from the remainder of the list and review them separately as Income and Long Term Appreciation recommendations. The nine are- Approx. Indicated Price Dividend Yield Allied Stores American Can American Chain Associated Dry Goods Coca Cola Hall Printing Raybestos-Manhattan United Fruit Western Auto Supply 41 32 131 22 55 54 33 3.00 2.00 2.50 1.80 5.00 1.40 3.40 3.00 1.60 5.7 4.3 6.1 5.6 3.8 6.4 6.2 5.5 4.8 lL . for purcohase at .preseQt . —– The balance of my recommended list, which will be named the Long Term Capital Appreciation list, will be reviewed in next week's letter. In the meantime, I am adding three issues reviewed below; namely, BUTLER BROS. (22 3,4) MASONITE CORP.( 41) and WESTINGHOUSE AIR BRAKE (32 5/8). These last two will be reviewed in subsequent bulletins together with CHICAGO CORP.( 24 3/4) and FOOD MACHINERY ( 58 1/4)which were added during the January decline. At this time, I am also eliminating Celanese Corp.(20 1/8).It has been showing below average price action and should be switched into recommended issues. BUTLER BROS. appears to be an interesting vehicle for longer term capital appreciation. Most of the company's real estate holdings were recently spun off as Canal-Randolph Corporation which is now selling at around 6. New management is in control of Butler Bros. and, if present contemplated plans work out, over the next several months the company should have cash of about 19-20 a share plus an earning power of 2.00 to 2.50 from the Ben Franklin Stores division and other smaller units. Present dividend rate is 35/ quarterly so the stock offers a yield of 6.1. Eventually, management expects to invest the expected 19-20 a share of cash in a manner which should .wQrk out to the stockholders. stock appears an interesting price speculation over a period pf time. The technical pattern, while somewhat distorted by the recent spin-off of Canal-Randolph Corp., shows the potential of a sizeable per- pentage advance. EDMUND W. TABELL WALSTON & CO. INC