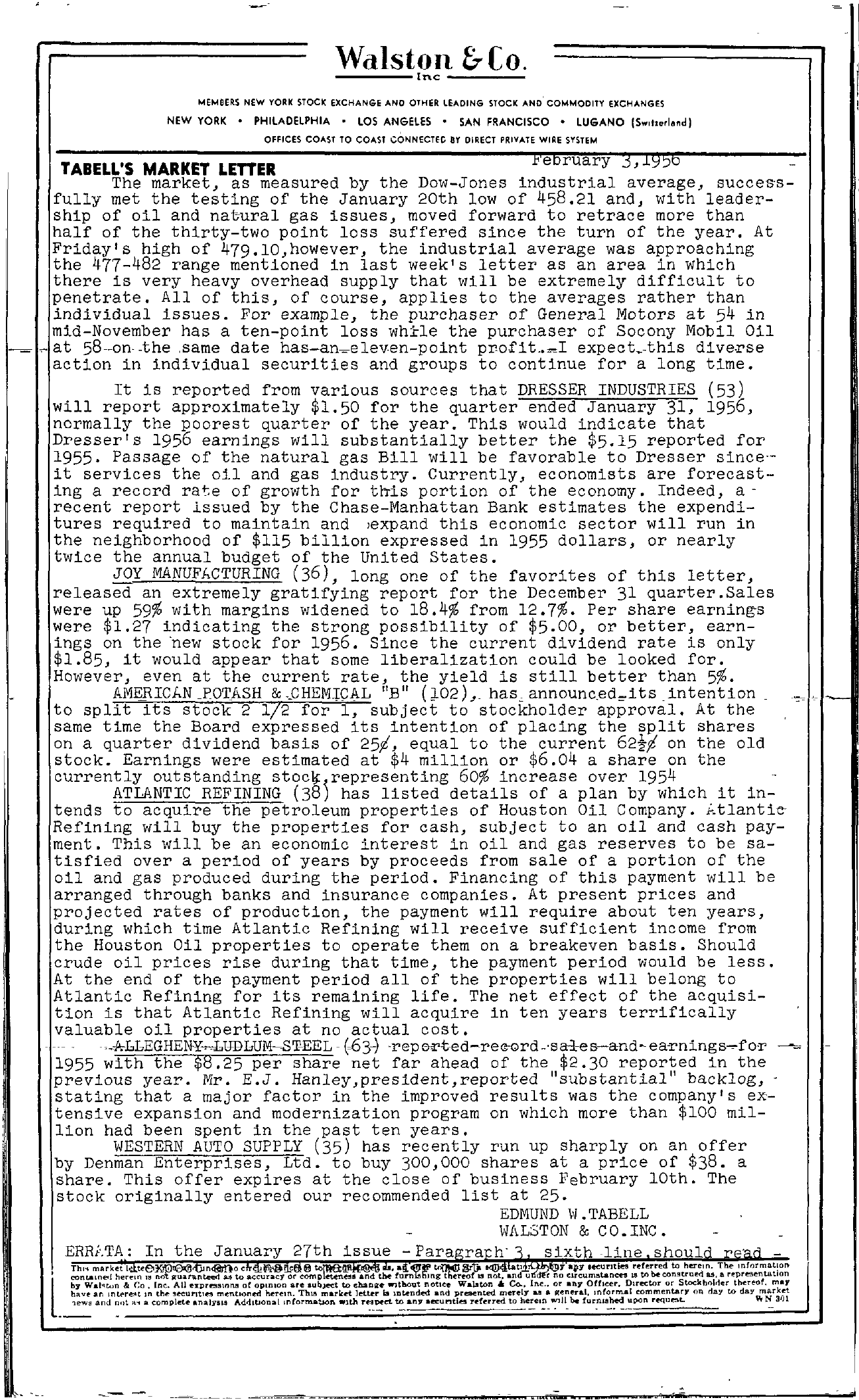 Walston &- Co. – – – – – – – – I n c – – – – MEMBERS NEW YORK STOCK EXCHANGE AND OTHER LEADING STOCK AND' COMMODITY EXCHANGES NEW YORK PHILADELPHIA LOS ANGELES SAN FRANCISCO LUGANO ISw,…,Id I ayOFFICES COAST TO COAST CONNECTfC DIRECT PRIVATE WIRE SYSTEM TAB Ell'S MARKET lEnER F'ebruary 3, 1956 — The market, as measured by the Dow-Jones industrial average, success- fully met the testing of the January 20th low of 458.21 and, with leader- ship of oil and gas issues, moved forward to retrace more than half of the thirty-two point loss suffered since the turn of the year. At Friday'S high of 479.10,however, the industrial average was approaching the 477-482 range mentioned in last week's letter as an area in which there is very heavy overhead supply that will be extremely difficult to penetrate. All of this, of course, applies to the averages rather than indiVidual issues. For example, the purchaser of General Motors at 54 in mid-November has a ten-point loss the purchaser of Socony Mobil Oil at 58–on- -the ,same date pr-ofit.I expect-this diverse action in individual securities and groups to continue for a long time. It is reported from various sources that DRESSER INDUSTRIES (53) will report approximately 1.50 for the quarter ended January 31, 1956, normally the poorest quarter of the year. This would indicate that Dresser's 1956 earnings will substantially better the 5.15 reported for 1955. Passage of the natural gas Bill will be favorable to Dresser since-it services the oil and gas industry. Currently, economists are forecasting a record rate of growth for this portion of the economy. Indeed, arecent report issued by the Chase-Manhattan Bank estimates the expenditures required to maintain and ,expand this economic sector will run in the neighborhood of 115 billion expressed in 1955 dollars, or nearly twice the annual budget of the United States. JOY MANUFhCTURING (36), long one of the favorites of this letter, released an extremely gratifying report for the December 31 quarter.Sales were up 59 with margins widened to 18.4 from 12.7. Per share earnings were 1.27 indicating the strong possibility of 5.00, or better, earnings on the 'new stock for 1956. Since the current dividend rate is only 1.85, it would appear that some liberalization could be looked for. However, even at the current rate, the yield is still better than 5. AMERIChN POTJ,SH & -CHEMICAL B (1.02), has e intention to split its stock 2 1/2 for 1, subject to stockholder approval. At the same time the Board expressed its intention of placing the split shares on a quarter dividend basis of equal to the current on the old stock. Earnings were estimated at 4 million or 6.04 a share on the currently outstanding 60 increase over 1954 . ATLANTIC REFINING (38 has listed details of a plan by which it in- tends to acquire the petroleum properties of Houston Oil Company. Refining will buy the properties for cash, subject to an oil and cash pay- ment. This will be an economic interest in oil and gas reserves to be satisfied over a period of years by proceeds from sale of a portion of the oil and gas produced during the period. Financing of this payment will be arranged through banks and insurance companies. At present prices and projected rates of production, the payment will require about ten years, during which time Atlantic Refining will receive sufficient income from the Houston Oil properties to operate them on a breakeven basis. Should crude oil prices rise during that time, the payment period would be less. At the end of the payment period all of the properties will belong to Atlantic Refining for its remaining life. The net effect of the acquisition is that Atlantic Refining will acquire in ten years terrifically valuable oil properties at no actual cost. — – (.63-) 'repoit'ted-rec-ord.'sal-es-and-eat'nings-for 1955 with the 8.25 per share net far ahead of the 2.30 reported in the previous year. Mr. E.J. Hanley,president,reported SUbstantial backlog, stating that a major factor in the improved results was the company's ex- tensive expansion and modernization program on which more than 100 million had been spent in the past ten years. WESTERN AUTO SUPPLY (35) has recently run up sharply on an offer by Denman Enterprises, Ltd. to buy 300,000 shares at a price of 38. a share. This offer expires at the close of business February lOth. The stock originally entered our recommended list at 25. EDMUND IV. TABELL – \vALSTON & CO.INC. – . ERRf,TA In the January 27th issue – Paragra)h' 3 sixth line shouln T'P',n – market It!tteeKKoltOO1 un4irno orI contained her;;'n niX guarl1.nteei J,. to aeeuracy an-4!/iti' ttlTlktlrra 'tnereoru not;and ay leeurlties referred to herein. The mforma.tlolt 19 to Mcon9trueQ as, a representation l by – Co. Inc. All of oplnlon are luhjed. to Wltlwut notlO!'e Wabton. Co.. Ine.. or atl.y Officer, Dlreetor or thereof. may an Int.lreot In 9e1!ut'ltloes mentioned and not a complete- aoalyll.'1 Ad.htJOnal – — .ThlS markg gter b Intended and presented merely II.! a R'eneral, mform.al eommentary on day to day market .Ith — to any III!CUllties to herem W-lJl be furn-l.!lhed–u-pon request. N 31)1 -.I i .- ,J