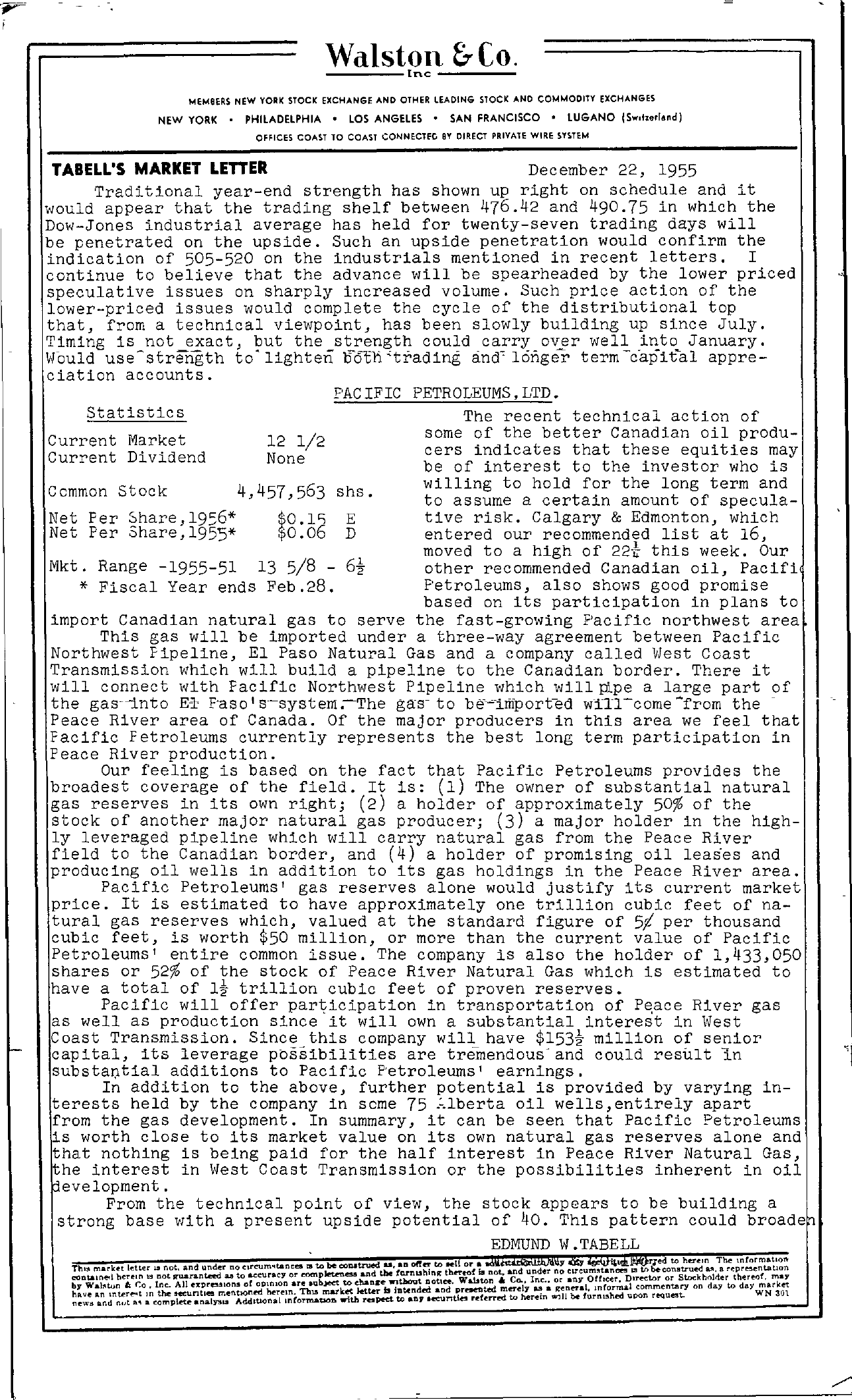 Walston &Co. Inc MEMBERS NEW YORK STOCK EXCHANGE ANO OTHER LEADING STOCK AND COMMODITY EXCHANGES NEW YORK PHILADELPHIA LOS ANGELES SAN FRANCISCO LUGANO ISw …I..dJ OFFICES COAST TO COAST CONNECTfC BY OIRECT PRIVATE WIRE SYSTEM TABELL'S MARKET LEnER December 22, 1955 Traditional year-end strength has shown up right on schedule and it would appear that the trading shelf between 476.42 and 490.75 in which the Dow-Jones industrial average has held for twenty-seven trading days will be penetrated on the upside. Such an upside penetration would confirm the indication of 505-520 on the industrials mentioned in recent letters. I continue to believe that the advance will be spearheaded by the lower priced speculative issues on sharply increased volume. Such price action of the lower-priced issues would complete the cycle of the distributional top that, from a technical viewpoint, has been slowly building up since July. Timing is not exact, but the strength could carryover well into January. Would use – strength to' lighten l5-otn'trading a.nd longer term -c-apit-al appre- ciation accounts. PACIFIC PETROLEUMS,LTD. Statistics Current Market Current Dividend 12 1/2 None The recent technical action of some of the better Canadian oil producers indicates that these equities may be of interest to the investor who is Cemmon Stock 4,457, 563 shs. Net Fer Share,19S6 Net Fer Share,195S O.l'l E 0.06 D willing to hold for the long term and to assume a certain amount of specula- tive risk. Calgary & Edmonton, which entered our recommended list at 16, Mkt. Range -1955-51 13 5/8 Fiscal Year ends Feb.28. moved to a high of this week. Our other recommended Canadian oil, Pacifi Petroleums, also shows good promise based on its participation in plans to import Canadian natural gas to serve the fast-growing Pacific northwest area This gas will be imported under a three-way agreement between Pacific Northwest Pipeline, El Paso Natural Gas and a company called West Coast Transmission which will build a pipeline to the Canadian border. There it will connect with Pacific Northwest Pipeline which the gas—Lnto E1- F-asols-system.-The gas- to a large part of the Peace River area of Canada. Of the major producers in this area we feel that Pacific Fetroleums currently represents the best long term participation in Peace River production. Our feeling is based on the fact that Pacific Petroleums provides the broadest coverage of the field. It is (1) The owner of substantial natural gas reserves in its own right; (2) a holder of approximately 50 of the stock of another major natural gas producer; (3) a major holder in the high- ly leveraged pipeline which will carry natural gas from the Peace River field to the Canadian border, and (4) a holder of promising oil and producing oil wells in addition to its gas holdings in the Peace River area. Pacific Petroleums' gas reserves alone would justify its current market price. It tural gas is estimated to reserves which, have approximately one valued at the standard tfrigilulrieonofcu51bicpefreethtouosfannda- cubic feet, is worth 50 million, or more than the current value of Pacific Petroleums' entire common issue. The company is also the holder of 1,433,050 shares or 52 of the stock of Peace River Natural Gas which is estimated to have a total of trillion cubic feet of proven reserves. Pacific will offer participation in transportation of River gas as well as production since it will own a substantial interest in West Coast Transmission. Since this company will have million of senior capital, its leverage possibilities are tremendous-and could result In substal),tial additions to Pacific Petroleums' earnings. In addition to the above, further potential is provided by varying in- terests held by the company in seme 75 oil wells,entirely apart from the gas development. In summary, it can be seen that Pacific Petroleums is worth close to its market value on its own natural gas reserves alone and that nothing is being paid for the half interest in Peace River Natural Gas, the interest in West Coast Transmission or the possibilities inherent in oil From the technical point of view, the stock appears to be building a strong base with a present upside potential of 40. This pattern could broadeh EDMUND W.TABELL market letter 13 not, and under no IS to c.eon\alneol heulf'l UI not Sl'Wlranteed u to a.eeuracy or b,. Walton 10 , lne. All UpreMIOnl of opinIOn arn1l ,ed.kteosa WiilJMf6rIedas an or .. tltUtSJItJiiivthe't nolftS'eh'Ii'nto tNhtft!'eof ill not. and under no &; cU'cuml'ltanCf!! 1lI tn to herem becon9trued TahreepInrtels')ernmtaattliOolnt WallIton C(). Inc or any Officer Dlreetor or St.oekholtier thereof, may tended aDd' proe'flUd me'l'ely as gene1'al, eommentary on da,. to day market have aannd nut aInctohmeplleeeteunantlael!pmlleI ntAIOddnleudohnearleIInnt.orma'IStlOmlIaor..-tth l'ClIIpeet ……n,. .unti ref erred. to herein WlII be furnished ulXln request. WN 301