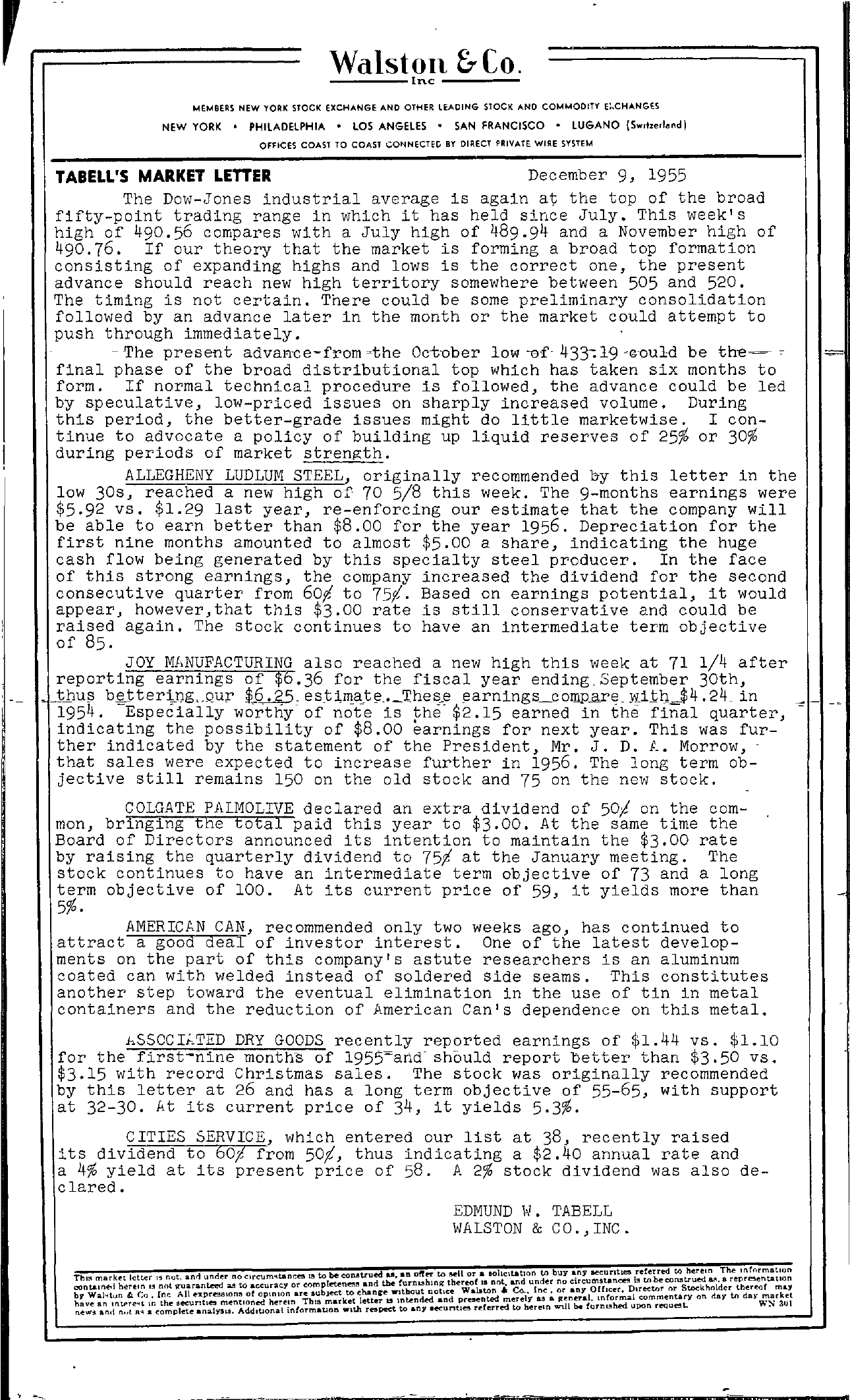 , Walston &Co. Inc – – – – MEMBERS NEW YORK STOCK EXCHANGE AND OTHER LEADING STOCK AND COMMODITY e;.cHANGES NEW YORK PHILADELPHIA LOS ANGELES SAN FRANCISCO LUGANO (Sw,hedd) OFFICES COAST TO COAST CONNECTEr; BY DIRECT PRIVATE WIRE SYSTEM TABELL'S MARKET LEnER December 9, 1955 The Dow-Jones industrial average is again at the top of the broad fifty-point trading range in which it has held sjnce July. This week's high of 490.56 compares with a July high of 489.94 and a November high of 490.76. If our theory that the market is forming a broad top formation consisting of expanding highs and lows is the correct one, the present advance should reach new high territory somewhere between 505 and 520. The timing is not certain. There could be some preliminary consolidation followed by an advance later in the month or the market could attempt to push through immediately. -lJ'he present Oc-tuber low -of- 433–19 be the- c final phase of the broad distributional top which has taken six months to form. If normal technical procedure is followed, the advance could be led by speculative, low-priced issues on sharply increased volume. During this period, the better-grade issues might do little marketwise. I con- tinue to advocate a policy of building up liquid reserves of 25 or 30 during periods of market strength. ALLEGHENY LUDLUM STEEL, originally recommended by this letter in the low 30s, reached a new high of 70 5/8 this week. The 9-months earnings were 5.92 vs. 1.29 last year, re-enforcing our estimate that the company will be able to earn better than 8.00 for the year 1956. Depreciation for the first nine months amounted to almost 5.00 a share, indicating the huge cash flow being generated by this specialty steel producer. In the face of this strong earnings, the company increased the dividend for the second consecutive quarter from to Based on earnings potential, it would appear, however,that this 3.00 rate is still conservative and could be raised again. The stock continues to have an intermediate term objective of 85. JOY MJ,NUFACTURING also reached a new high this week at 71 1/4 after reporting earnings of 6.36 for the fiscal year ending. September 30th, bdteri,J)gQur Q.zs earningscompare YIitl4. 24 in 1954. -Especially worthy- of note is the- 2.15 earned in the final quarter, – indicating the possibility of 8.00 earnings for next year. This was fur- ther indicated by the statement of the President, Mr. J. D. L. Morrow, – that sales were expected to increase further in 1956. The long term ob- jective still remains 150 on the old stock and 75 on the new stock. COLGATE PALMOLIVE declared an extra dividend of 501 on the com- mon, bringing the total paid this year to 3.00. At the same time the Board of Directors announced its intention to maintain the 3.00 rate by raising the quarterly dividend to at the January meeting. The stock continues to have an intermediate term objective of 73 and a long term objective of 100. At its current price of 59, it yields more than 5. AMERICAN CAN, recommended only two weeks ago, has continued to attract a good deal of investor interest. One of the latest develop- ments on the part of this company's astute researchers is an aluminum coated can with welded instead of soldered side seams. This constitutes another step toward the eventual elimination in the use of tin in metal containers and the reduction of American Can's dependence on this metal. DRY GOODS recently reported earnings of 1.44 vs. 1.10 for the first-nine months of should report better than 3.50 vs. 3.15 with record Christmas sales. The stock was originally recommended by this letter at 26 and has a long term objective of 55-65, with support at 32-30. At its current price of 34, it yields 5.3. its CITIES dividend toSE6R0V1ICfEr,omwh5ic0h/, entered our list thus indicating at 38, recently raised a 2.40 annual rate and a 4 yield at its present price of 58. A 2 stock dividend was also de- clared. EDMUND \'1. TAB ELL WALSTON & CO., INC. – — .. . i..,al.. Ii. –