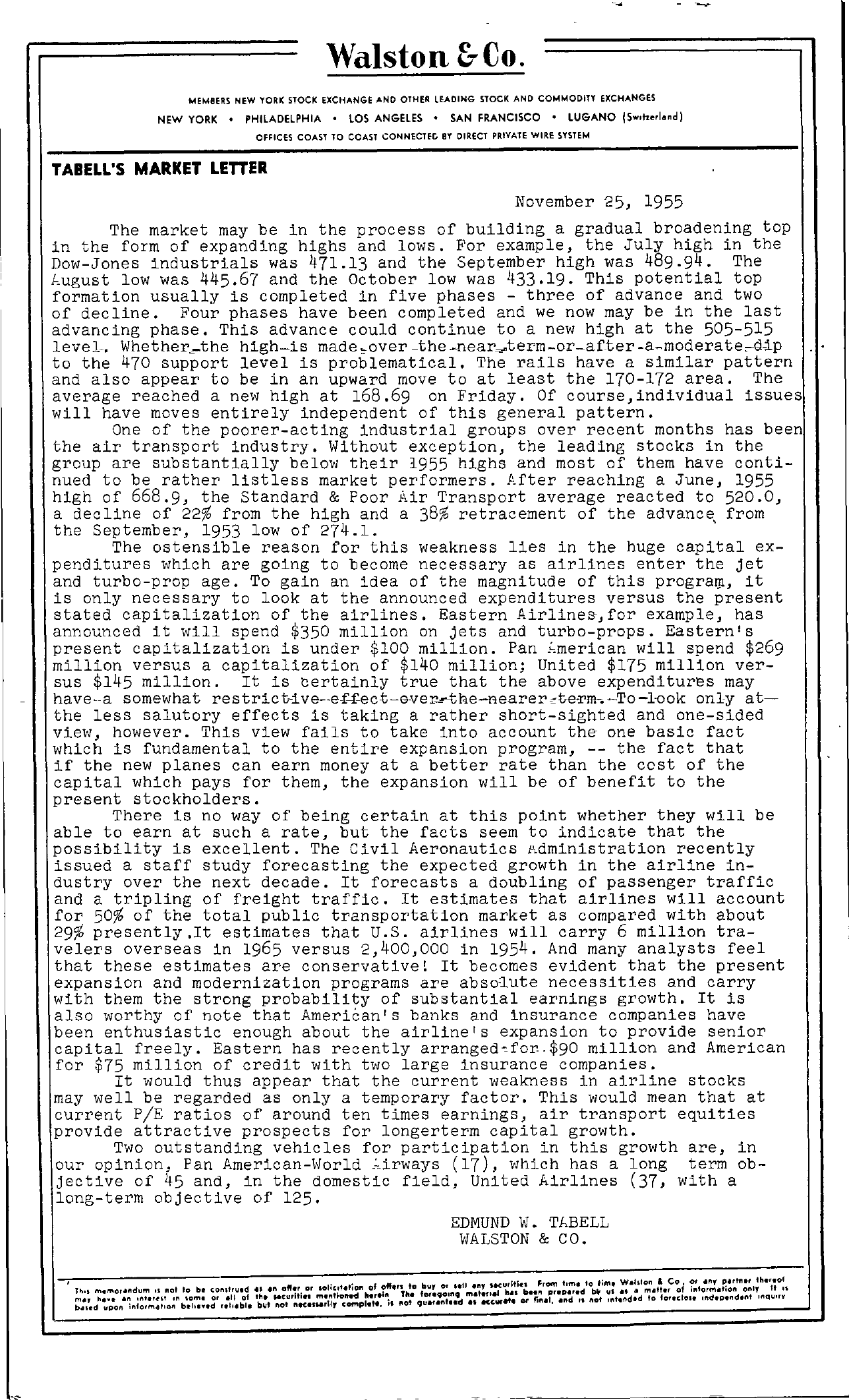 Walston &Co. —…… – MEMBERS NEW YORK STOCK EXCHANGE AND OTHER LEADING STOCK AND COMMODITY EXCHANGES NEW YORK PHILADELPHIA LOS ANGELES SAN FRANCISCO LUGANO ISw,'wld) OFFICES COAST TO COAST cO…. NEcnt. BY DIRECT PRIVATE WIRE SYSTEM TABELL'S MARKET LEnER November 25, 1955 The market may be in the process of building a gradual broadening top in the form of expanding highs and lows, For example, the July high in the Dow-Jones industrials was 471.13 and the September high was 489.94. The hUgUSt low was 445.67 and the October low was 433.19. This potential top formation usually is completed in five phases – three of advance and two of decline. Four phases have been completed and we now may be in the last advancing phase. This advance could continue to a new high at the 505-515 high-is made the .a-moderate,-g;ip to the 470 support level is problematical. The rails have a similar pattern and also appear to be in an upward move to at least the 170-172 area. The average reached a new high at 168.69 on Friday. Of course,individual issues will have moves entirely independent of this general pattern. One of the poorer-acting industrial groups over recent months has been the air transport industry. Without exception, the leading stocks in the group are substantially below their 1955 highs and most of them have conti- nued to be rather listless market performers. After reaching a June, 1955 high of 668.9, the Standard & Poor Air Transport average reacted to 520.0, a decline of 22 from the high and a 38 retracement of the advance from the September, 1953 low of 274.1. ' The ostensible reason for this weakness lies in the huge capital ex- penditures which are going to become necessary as airlines enter the jet and turbo-prop age. To gain an idea of the magnitude of this it is only necessary to look at the announced expenditures versus the present stated capitalization of the airlines. Eastern Airlines,for example, has announced it will spend 350 million on jets and turbo-props. Eastern's present capitalization is under 100 million. Pan will spend 269 million versus a capitalization of 140 million; United 175 million ver- sus 145 million. It is bertainly true that the above expenditures may havec-a somewhat res tric t-ive–e-f-f'ect-ever–the-nearerc'1e-rm-. -To -1-0ok only a t- the less salutory effects is taking a rather short-sighted and one-sided view, however. This view fails to take into account the one basic fact which is fundamental to the entire expansion program, — the fact that if the new planes can earn money at a better rate than the cost of the capital which pays for them, the expansion will be of benefit to the present stockholders. There is no way of being certain at this point whether they will be able to earn at such a rate, but the facts seem to indicate that the possibility is excellent. The Civil Aeronautics administration recently issued a staff study forecasting the expected growth in the airline in- dustry over the next decade. It forecasts a doubling of passenger traffic and a tripling of freight traffic. It estimates that airlines will account for 50 of the total public transportation market as compared with about 29 presently.It estimates that U.S. airlines will carry 6 million tra- velers overseas in 1965 versus 2,400,000 in 1954. And many analysts feel that these estimates are It becomes evident that the present expansion and modernization programs are necessities and carry with them the strong probability of substantial earnings growth. It is also worthy of note that American's banks and insurance companies have been enthusiastic enough about the airline's expansion to provide senior capital freely. Eastern has recently arranged-for-90 million and American for 75 million of credit with two large insurance companies. It would thus appear that the current weakness in airline stocks may well be regarded as only a temporary factor. This would mean that at current PIE ratios of around ten times earnings, air transport equities provide attractive prospects for longerterm capital growth. Two outstanding vehicles for participation in this growth are, in our opinion, Pan 'irways (17), which has a long term ob- jective of 45 and, in the domestic field, United Airlines (37, with a long-term objective of 125. EDMUND W. TJ,BELL WALSTON & CO. . TM, Th., m.mor,ndum ,s not to be (ol'l1tru.d .1 ,n off.r or lOh clt.t,on 0f off,'1 t0 b U'/' 0r I.11 n'I' u..uhd.1tiuM,nFromr,pti.mr,.dto timul. UW.h lomn .tIt.rCo0 I 0In, fo'nr'ml' .tpio,rntnolnt lyth , r,of It me, h…..n ,nt,rul ,,. 101'1'1' or .11 of th, Mu,I,i m.ntloned h.,.ln. b.n.d IIDon ;nfo,I,o b.h ….d r.Ibl. but not neee…,lIy complete, flot qfuore.rCelOt','e''. m.t.tI … e. IICCW 0' fin.f , .nd ,. not ,nt,nd,d to for,elolt ,nd'D.nd,nt ,Mll/orV