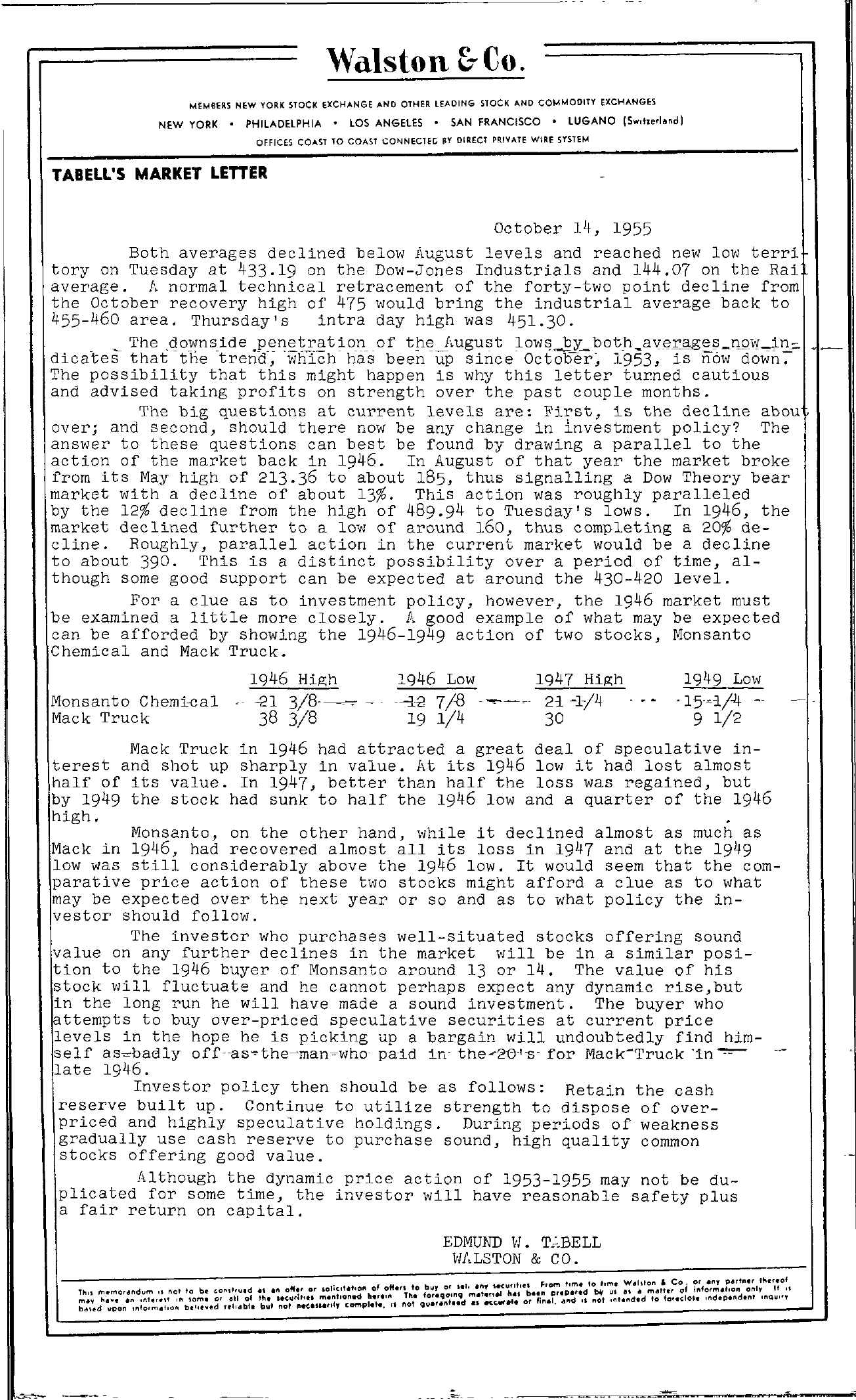 Walston &Co. MEMBERS NEW YORK STOCK EXCHANGE AND OTHER LEADING STOCK A.ND COMMODITY EXCHANGES NEW YORK PHILADELPHIA LOS ANGELES SAN FRANCISCO LUGANO ISw,Idi OFFICES COAST TO COAST CONNECTfG IIV DIRECT PRIVATE WIRE SYSTEM TABEll'S MARKET lEnER October 14, 1955 Both averages declined below August levels and reached new low terri tory on Tuesday at 433.19 on the Dow-Jones Industrials and 144.07 on the Rai average. A normal technical retracement of the forty-two point decline from the October recovery high of 475 would bring the industrial average back to 455-460 area. Thursday's intra day high was 451.30. dicates The .downside p that -the -trena ;en'wehtriachtiohnas of the August been -up since lows by bothavragesn,i)win;. 1953, is now dowl1- The possibility that this might happen is why this letter turned cautious and advised taking profits on strength over the past couple months. The big questions at current levels are First, is the decline abou over; and second, should there now be any change in investment policy The answer to these questions can best be found by drawing a parallel to the action of the market back in 1946. In August of that year the market broke from its May high of 213.36 to about 185, thus signalling a Dow Theory bear market with a decline of about 13. This action was roughly paralleled by the 12 decline from the high of 489.94 to Tuesday's lows. In 1946, the market declined further to a low of around 160, thus completing a 20 decline. Roughly, parallel action in the current market would be a decline to about 390. This is a distinct possibility over a period of time, although some good support can be expected at around the 430-420 level. For a clue as to investment policy, however, the 1946 market must be examined a little more closely. A good example of what may be expected can be afforded by showing the 1946-1949 action of two stocks, Monsanto Chemical and Mack Truck. 1946 High Monsanto Chemical – -21 Mack Truck 38 3/8 1946 Low –l) 19 1/4 1947 High 21-1/4 30 1949 Low 9 1/2 – Mack Truck in 1946 had attracted a great deal of speculative in- terest and shot up sharply in value. At its 1946 low it had lost almost half of its value. In 1947, better than half the loss was regained, but by 1949 the stock had sunk to half the 1946 low and a quarter of the 1946 high. . Monsanto, on the other hand, while it declined almost as much as Mack in 1946, had recovered almost all its loss in 1947 and at the 1949 low was still considerably above the 1946 low. It would seem that the com- parative price action of these two stockS might afford a clue as to what may be expected over the next year or so and as to what policy the in- vestor should follow. The investor who purchases well-situated stocks offering sound value on any further declines in the market will be in a similar position to the 1946 buyer of Monsanto around 13 or 14. The value of his stock will fluctuate and he cannot perhaps expect any dynamic rise,but in the long run he will have made a sound investment. The buyer who attempts to buy over-priced speculative securities at current price levels in the hope he is picking up a bargain will undoubtedly find him- self asbadly paid in the-'20's- for Mack-Truck in late 1946. Investor policy then should be as follows Retain the cash reserve built up. Continue to utilize strength to dispose of overpriced and highly speculative holdings. During periods of weakness gradually use cash reserve to purchase sound, high quality common stocks offering good value. Although the dynamic price action of 1953-1955 may not be duplicated for some time, the investor will have reasonable safety plus a fair return on capital. EDMUND W. T;,BELL vlJ',LSTON & CO.